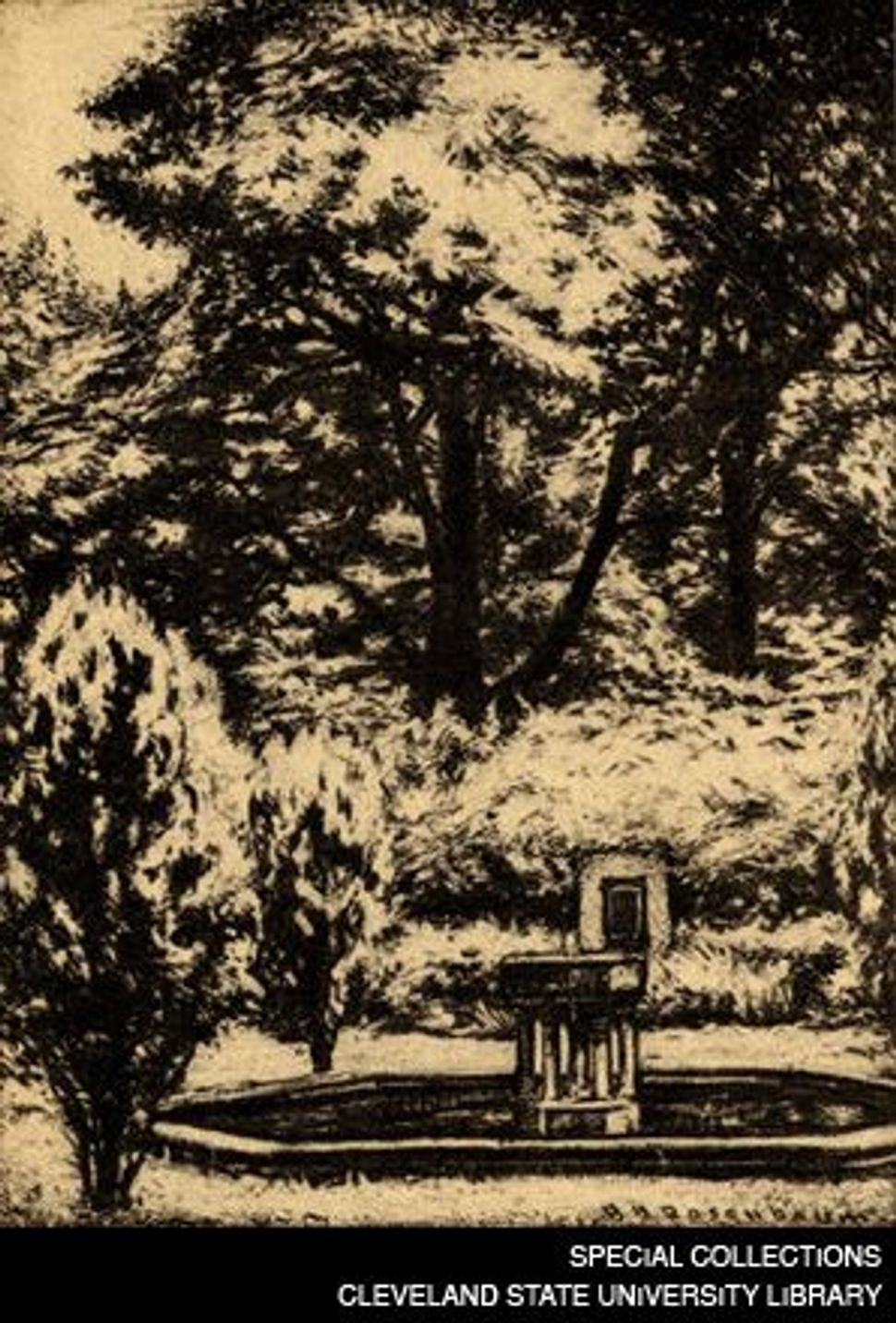 The greening of America has assumed all sorts of forms of late, from heightened attentiveness to the kinds of foods we put on our table and the cars we drive to reusing sheets and towels while on vacation, a gesture in the direction of “conserving our country’s natural resources,” or so guests at Hilton Hotels are duly informed. In each instance, we are correcting, setting right and repairing years of manmade damage to our environment. We are, in other words, responding after the fact. 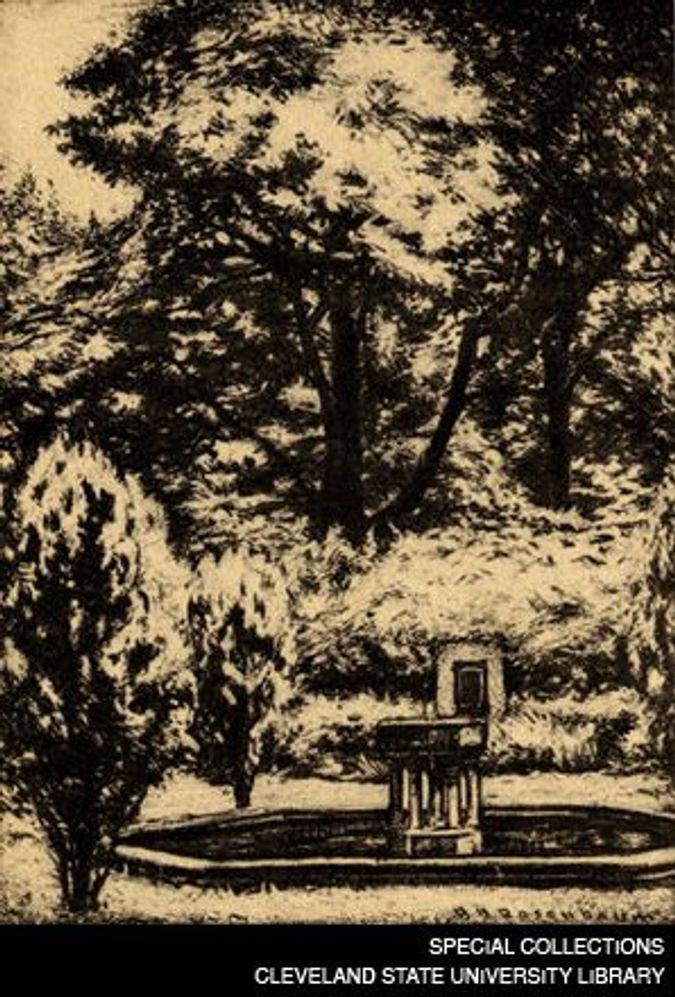 But the good citizens of Cleveland, way back in the 1920s, took the initiative and engaged directly and imaginatively with Mother Nature. Erecting a series of gardens in downtown Cleveland, they drew on her bounty both to celebrate what we today might call ethnic traditions and to defuse the possibility of inter-ethnic conflict in one of the nation’s most polyglot urban populations.

The talk of the town, at least through the 1950s, the Cleveland Cultural Gardens then comprised a series of 20 formal landscapes. Each was stocked with plantings, foliage and stonework from any number of homelands, along with monuments and plaques of representative cultural heroes. The Italian garden, for instance, boasted a bust of Michelangelo; the Ukrainian one a stone-and-iron gateway, while the Irish version was planted in the form of a Celtic cross — all in the service of what a contemporary observer called a “message [of intercultural understanding] in trees, shrubs and pathways.” Inscribing ethnicity onto the landscape, the Cleveland Cultural Gardens was far ahead of its time in saluting the value of ancestral heritage. Instead of banishing the Old World to the dim corner of an ethnic social hall, a quintessentially urban institution — a public park — brought it front and center. In Cleveland during the interwar years, the Old World was literally contiguous with the New.

The very first in this latticework of gardens was the so-called Hebrew Cultural Garden. Designed by T. Ashburton Tripp, a Harvard-educated landscape architect, it featured three components, each of which was designed to highlight the garden’s “oriental” features: a six-pointed brick walkway whose pattern resembled that of a Jewish star, a rock garden containing “Palestinian plants” and a third garden shaped like a “Hebrew harp.” At the latter’s dedication in 1926, none other than the celebrated Hebrew poet Chaim Nachman Bialik, then touring the country, planted three Cedars of Lebanon. Their presence was augmented a few years afterward, when Chaim Weizmann, later Israel’s very first president, planted three more. “Today, Chaim Bialik plants the older poetry into a newer earth,” rhapsodized one of the guests at the dedication ceremony, adding that the “symbolism of their evergreen fragrance represent[s] an ancient faith.” Later additions included a boulder imprinted with a bas-relief of Rebecca Gratz, the 19th-century American-Jewish educator, and bronze plaques dedicated to Maimonides; Ahad Ha’am, the architect of cultural Zionism, and Emma Lazarus, as well as a series of benches, which, as the American Jewish Year Book observed in 1944, were “in a real sense seats of learning, providing occasions for esthetic and cultural enjoyment.”

In the years that followed, as cultural gardens dedicated to the flora, fauna and the famous of Italy, Germany and Poland took shape, the Hebrew Cultural Garden simultaneously held its own and became ever more distinctive. Much like the problematic positioning of the Jews at world’s fairs — Were they to be placed alongside other nations? Religions? Curiosities? — the cultivation of a Hebrew garden underscored, if on a more intimate scale, the anomalousness of the Jews. Despite the presence of trees with a biblical provenance, the garden as a whole suggested that the rootedness of the Jews was less a matter of land, of fixity, than of culture and portability. It’s not for nothing, after all, that this earth-bound salute to the heritage of the Jews was called “Hebrew” rather than Palestinian or, for that matter, Jewish. When it came to the Jews, it wasn’t region or religion so much as the transnational flowering of culture that secured them a place in the world — even in Cleveland.

For all its much vaunted ambitions and its popularity as the place for large-scale ethnic celebrations, the cultural gardens eventually fell on hard times, a casualty of suburbanization, ghettoization and urban decay. Vandals made off with its bronzes, gardens went untended and graffiti replaced once verdant symbols of solidarity. By the 1970s, what had been a site of confraternity became a site of racial hostility.

In the past couple of years, the Cleveland Cultural Gardens has shown signs of regeneration. Thanks to more money in the city budget, the park is in better physical shape than it had been in quite a while; some of the vandalized statuary has been replaced, and the Jewish Community Federation of Cleveland has taken the Hebrew Cultural Garden under its wing, sponsoring new plantings and an annual beautification campaign.

Let’s hope that the situation can be stabilized and that Cleveland’s Cultural Gardens can continue to serve as a reminder of a time when people looked to nature to set things right.