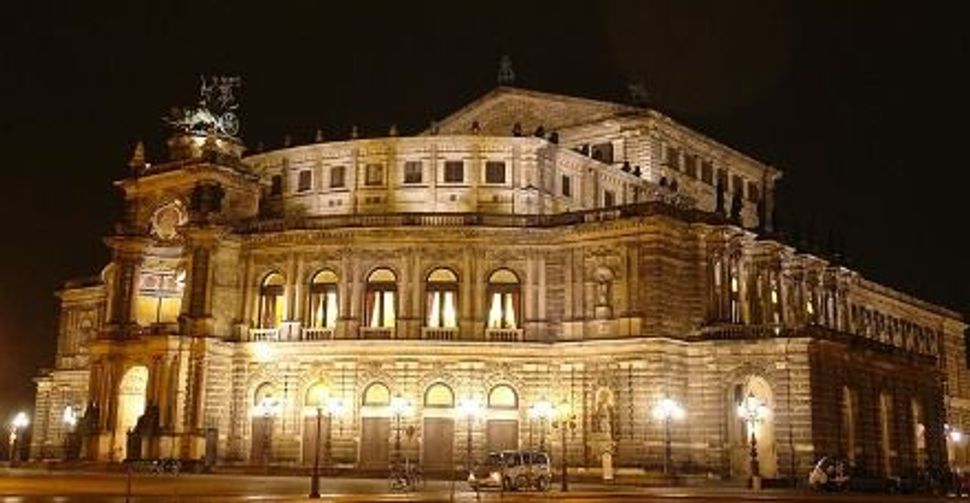 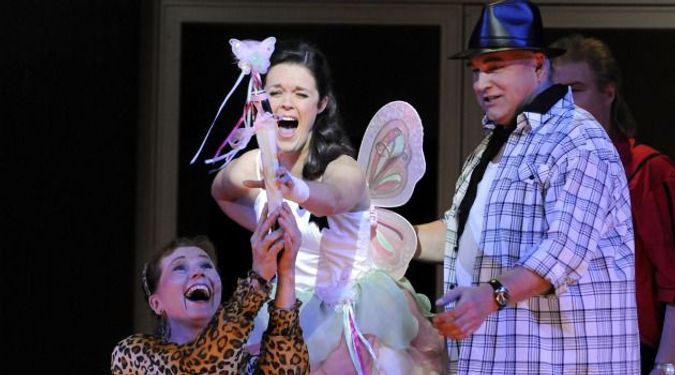 Fresh Approach: Dresden?s Semper Opera company is staging Kurt Weill?s ?Street Scene,? part of its effort to break with the past. Image by Matthias Creutziger

The only thing that exceeds Dresden’s beauty is the city’s self-regard — which would be insufferable if it weren’t so well deserved.

Musically, this Rococo jewel box capital of Saxony — justifiably called “Florence on the Elbe” — is famous as the home of the Saxon State Opera, which is popularly known as the Semper Opera and is where Richard Strauss premiered nine and Richard Wagner three of their respective music dramas. Its orchestra, the Dresden Staatskapelle, is one of the oldest and finest in the world. The city, which was almost completely destroyed in the Allied firebombing near the end of World War II, has been rebuilt in the past 30 years to resemble its past, beginning with the opera house, which was completed in 1985. Now, Dresden is beginning to reclaim its place on the world stage.

Opera has a cultural and intellectual prominence in Germany that can be difficult for Americans to appreciate: What happens in the opera house matters deeply. Today there are about 400 performances a year in the rebuilt Semper, where the new director, Ulrike Hessler, has made headlines around the world with her out-of-nowhere snagging of superstar conductor Christian Thielemann as the Semper’s new music director, starting in 2012. Equally astounding was Dresden’s sudden replacement of the Berlin Philharmonic as the partner of the Salzburg Festival, starting in 2013.

But as the Semper focuses on its future, it is also atoning for its past. In an extraordinary gesture, Hessler recently arranged for the Semper to mount a hard-hitting exhibition titled “Silenced Voices” (“Verstummte Stimmen”), exposing the role of the arts leading up to and during World War II.

The exhibition, which was spearheaded by historian Hannes Heer and first shown in Hamburg in 2006, is adapted for each location in which it is mounted. The Dresden version, which was on view in the Semper’s palatial lobby from May 15 to July 13, spotlighted the surprisingly direct role the opera house played in empowering the Nazis. The neighboring Saxon State Theater, under new director Wilfried Schulz, hosted a parallel exhibition, documenting its own role at that time. And in conjunction with the exhibition, the Semper mounted its first production of “Street Scene,” Kurt Weill’s “American” opera, demonstrating an alternative past that might have been.

“Silenced Voices” is a powerful exhibition, but with a caveat: It involves a lot of reading, and the stories are surprisingly complex. In 1933, the Semper was summarily taken over by the Theaterfachgruppe, an internal organization that aggregated several conservative political groups. Its members comprised about one-third of the Semper’s 800 workers, led by a hairdresser named Franz Heger and a bit player named Alex Posse. When Heer and I were admitted by one of the stage crew into the part of the exhibition situated in the theater lobby, the worker exclaimed, unprompted, how shocked he was to learn that it was backstage people (“My colleagues!”) who had taken over the theater. Heer later expressed gratification that the worker had learned that “it wasn’t the ‘evil Hitler’ who made them do it — it was something they themselves did. This man will tell his co-workers, and they will begin to know what really happened.”

When Heger seized control of the Semper, its director was Fritz Busch, one of the finest conductors of the 20th century. Busch was not Jewish, but he was a liberal, and therefore “politically undesirable.” He also worked closely with many Jewish artists. For years he had tried to accommodate the ever-straitening circumstances and, even after being humiliated when the Theaterfachgruppe deposed him as music director, agreed to remain as conductor. The evening of the takeover, he appeared to conduct a performance of Verdi’s “Rigoletto”; for his pains, he was booed off the podium before he could begin. I’m told there is a myth among the orchestra musicians that a number of the players walked out with him, in solidarity. The truth is, no one left with him.

Hitler, desperate to have Busch remain in order to maintain a facade of normalcy, sent two telegrams protesting the action as damaging to party strategy. But the Nazis ultimately acquiesced to the fait accompli and elsewhere adopted the takeover strategy as their own. The minority Theaterfachgruppe cowed everyone else, and no matter how much those who were “politically undesirable” or Jewish tried to cooperate, they were gradually forced out. Hitler made sure not to appear in Dresden until the Semper Opera had been made Judenfrei, free of Jews.

“Only in the 1990s,” Hessler explained, “long after his death and after reunification, did [then-Semper Opera music director] Giuseppe Sinopoli formally and publicly say, in the name of the Semper Opera, ‘Fritz Busch, we apologize.’”

In keeping with the confrontational spirit of “Silenced Voices,” Hessler complemented the exhibition with a production of Kurt Weill’s “Street Scene,” bringing Weill’s “Broadway opera” to the same state-supported stage where his operatic career began 85 years earlier, when Busch conducted his first opera, “Der Protagonist.”

The early works that Weill wrote with Bertolt Brecht in Germany, such as “The Threepenny Opera” and “Mahagonny,” have long been critically accepted. His American works, such as “Street Scene,” have not. Theodor Adorno went so far as to accuse Weill of “selling out” in his American works, betraying his more “authentic” German creations.

But Weill was clear about what he was doing. The son of a cantor in Dessau, Weill abandoned Germany in 1933, going first to France and then to the United States. When The New York Times reviewed the original Broadway production of “Street Scene” in 1947 and referred to the composer as “German,” Weill wrote to the paper, thanking the critic for the rave review, but demanded a correction: “Although I was born in Germany, I do not consider myself a ‘German composer’…. I am an American citizen.”

One of the most extraordinary scores ever to have been written for Broadway, “Street Scene” makes the same point in music as Weill’s letter to the Times, and it won him the 1947 Tony award for best original score. Based on Elmer Rice’s Pulitzer Prize-winning 1929 play, with lyrics by poet Langston Hughes, the production has a cast of close to 60, including nearly 35 solo singing roles. All the characters come from average working families of different ethnic backgrounds, and they live together in a New York City brownstone tenement. Although no single character holds center stage for long, each has at least one aria that identifies him or her indelibly and succinctly. Mirroring Rice’s mix of the comic, dramatic and tragic, Weill’s exuberantly mongrel score blends Broadway, blues, Puccini, Wagner, lindy hop — you name it — as if contemptuous of any kind of “purity.”

In place of stylistic purity, Weill substituted integration. With “Street Scene,” he wrote in the liner notes to the original cast album release that he wanted to create a new “American opera-form” that “would completely integrate drama and music, spoken word, song and movement.” The opera can also be interpreted as a psychological portrait of Weill’s own flight from Germany; in it, characters inflict cruelties on one another until the ingénue is forced to leave the neighborhood.

The performance by the Semper was illuminating, if not entirely satisfying.

Although the drama was ultimately successful, the shortcomings of the production seemed to stem from the difficulty of translating the work’s “American” sensibilities, which are more than just the language (the opera was performed in German translation). The brownstone was transformed into a scaffolding of boxes, adding up to the sort of faceless steel-and-glass apartment building familiar from the old German Democratic Republic days. The opening number (“Ain’t It Awful, the Heat?”), critical to establish both the oppressiveness of the weather and the claustrophobic living conditions of the neighborhood, was well sung, but missed on both counts. It did not help that one character had a long scarf around his neck (apparently to indicate artistic temperament) while the other characters made gestures of wiping sweat from their foreheads.

The Dresden Staatskapelle musicians are among the finest in the world, but clearly they didn’t quite have the hang of the music’s style. The American tradition of loose-limbed “jumping” or “laying behind” the beat ran up against Dresden’s deserved reputation for precision. With American rhythms, it was apparent that they were trying out a foreign language, enunciating clearly but without much inflection, strictly as notated. And the music don’t mean a thing if it ain’t got that “schwung.” But everyone played with the usual enthusiasm and clarity, so there is hope that the Staatskapelle will catch more of the music’s spirit the more they play it.

During the first half-hour of the performance, one could feel the shock of the audience witnessing something very different at their hallowed Semper Opera. But after the shock began to ebb, the virtues of the work became apparent as the dramatic points began to hit home. By the end the reaction was strongly positive. And the reasons for bringing “Street Scene” to Dresden became clear.

Dresden itself is a Rorschach test of historical consciousness. Saxony’s history of anti-Semitism goes back at least to Martin Luther, who infamously advocated burning synagogues, razing Jewish schools and executing rabbis. Under postwar Communist rule, history was rewritten to teach East Germans to think of themselves as victims rather than as perpetrators. Since the obvious horrors of the Allied firebombing can easily be twisted to represent the apotheosis of this view, every February 13, on the anniversary of the firebombing, neo-Nazis gather in the city to co-opt observances.

But things are changing. For several years, just as the city has been rebuilding itself, growing numbers of Dresdeners have counter-demonstrated to protest the neo-Nazi rallies, even in defiance of local laws that require counter-demonstrations to be held on a different day in order to prevent violence. This year, thousands of counter-demonstrators clashed with hundreds of neo-Nazis, far fewer than were expected.

In another confrontational gesture, the German Defense Ministry will open its new Museum of Military History there in October. It will be housed in a renovated armory building that architect Daniel Libeskind has brilliantly and symbolically punctured with a glass-and-steel wedge — an extreme modernist gesture violating Dresden’s overwhelmingly baroque aesthetic.

Bringing “Street Scene” to Dresden is yet another act of poetic justice, embracing not just a composer once rejected, but also Weill’s subversion of the traditional German view of “high” culture. As for the “Silenced Voices” exhibition, it will next be mounted in the center of Wagner’s universe, Bayreuth, for the composer’s bicentenary in 2013. Heer has obtained assurances from the new generation of the composer’s descendants that there will be full access to the hitherto secret family archives, which should provide a wealth of revelations.

In Dresden and in Germany, a new generation is taking over. As it has been throughout their history, opera is leading the way.

Raphael Mostel is a composer, writer and lecturer based in New York City. He frequently writes for the Forward.