At the Heart of Self-Hatred

Since reading the front-page profile of Richard Falk in the July 29 issue of the Forward, I’ve been thinking about the phrase “Jewish self-hatred.” Falk, for those of you who missed the article, is a retired professor of international law who has pilloried Israel repeatedly in different places and capacities, among them that of a United Nations investigator in the Palestinian territories, and recently posted on his blog site a cartoon of a dog with a yarmulke urinating on a blindfolded female figure of Justice. He also, it so happens, is a Jew — one who has been called a “self-hating” Jew by some people, and “nothing of the sort” by others. 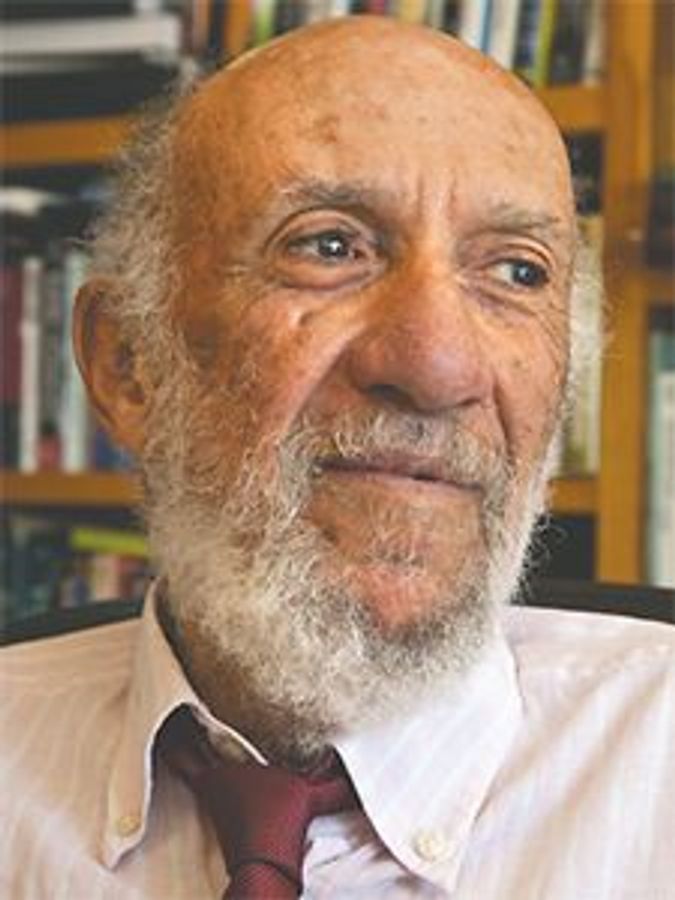 Pilloried: Plenty of people hate Richard Falk, but does he hate himself? Image by WAYNE SCHOENFELD

Is he or isn’t he? The author of the Forward profile, Naomi Zeveloff, came down delicately on the side of “he isn’t” when she wrote, “To call Falk ‘a self-hating Jew’… would imply that Falk harbors a deep discomfort with his Jewish identity, and that this anguish manifests itself as anti-Semitism in his personal life and academic work.” It’s an implication, her piece suggested, that has no basis, since Falk, although having had little contact with Jewish life, says he is comfortable with his Jewish identity and is acting in the spirit of Judaism’s concern for social justice by helping to lead the international assault on Israel as a human rights violator.

Though someone like Richard Falk is not, to put it very mildly, my favorite kind of Jew, I agree with Zeveloff. Falk is not a “self-hating Jew.” In fact, he appears to be rather fond of himself. If we need a label for such people, we should look for a different one.

Jüdischer selbsthass, or “Jewish self-hatred,” is a term coined in Weimar Germany, where Austrian-born Jewish writer Anton Kuh first proposed it as an improvement on Theodor Herzl’s more ironic “anti-Semite of Jewish origin” in 1921. Its main popularizer, however, was the German-Jewish philosopher Theodor Lessing, who made it the title of a book published in 1930. Lessing, an originally assimilationist German Jew who became a Zionist under the impact of the rise of Nazism, attempted to analyze the widespread phenomenon of German Jews who despised themselves for being Jewish, concentrating on well-known intellectuals like Otto Weininger, Arthur Trebitsch and others.

Trebitsch’s feeling that “as long as I live, I cannot deny the sin of my Jewishness nor purge myself of the curse of it, of that primal, metaphysical guilt that weighs on me like a mountain and by which I know myself to be damned and condemned,” extreme though it may seem, was typical of such men. In discussing it, Lessing, while pointing out that the tendency of Jews to hold themselves responsible for their misfortunes at the hands of their enemies is as old as the biblical prophets, nevertheless distinguished between the Jewish self-blame of a Jeremiah or Amos and the Jewish self-hatred of a Trebitsch or Weininger. Amos and Jeremiah may have thought that the Assyrians or Babylonians were doing God’s will by brutally conquering Israel, but they did not identify with them. Men like Trebitsch and Weininger did identify with German and European culture. The self-hating Jew was a modern phenomenon caused by the unrequited love of Jews for a gentile society that rejected them — a rejection that they then introjected.

As such, self-hating Jews are a product of two things: the Jewish desire to assimilate and anti-Semitism. In times and places where one or the other of these is not strong, as assimilationism was not in premodern Europe, and anti-Semitism is not in 21st-century America, Jewish self-hatred rarely appears. Jews who are accepted as Jews by the non-Jewish world that they wished would accept them have little cause to be disgusted by their own Jewishness.

What, then, shall we say of a successfully assimilated Jew like Richard Falk, who makes a point of singling out a Jewish state for its misdeeds among all the nations of the world and promulgates a scurrilous cartoon aimed at it while claiming to be in the tradition of the biblical prophets? Only, perhaps, that the prophets, despite their ferocious anger at their own people, cared passionately about them and identified fully with their fate, from which they never sought to stand apart or disassociate themselves. This is what gives them their great pathos. They may have sometimes hated their fellow Israelites, but they also deeply loved them, the way one sometimes hates and loves one’s own family.

It’s hard to imagine a Richard Falk, a Noam Chomsky, a Jacqueline Rose or others of their ilk feeling love for the Jewish people or losing any sleep over the people’s fate. What they’re enamored by is their image of themselves as Jews who have the moral courage to attack a Jewish state and the moral impunity to do so, which their Jewishness gives them. (“What, me anti-Jewish? I’m a Jew myself!”) Far from being self-hating Jews, they are self-loving Jews of the I’m-not-one-of-you variety. If you can think of a catchier way to put that, let me know.

At the Heart of Self-Hatred