Songs of a Lost Tribe’s Longing 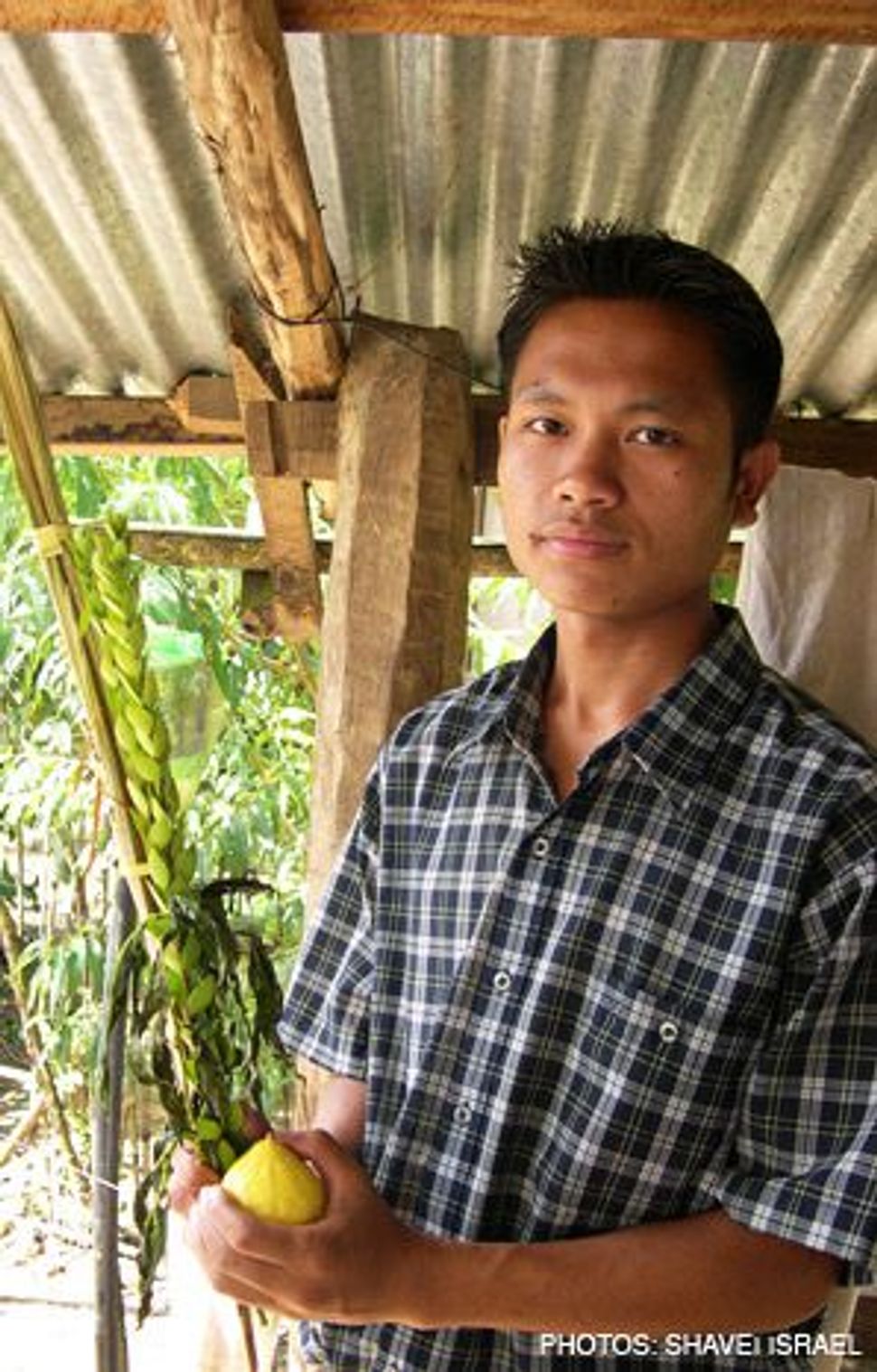 OBSERVANT: A Bnei Menashe in India who is getting ready for the Sukkot holiday.

In the Indian states of Mizoram and Manipur, far in the northeast near the Burmese border, some 7,000 people observe the Jewish Sabbath, kosher dietary laws and rules of family purity. Already, 1,400 of these people, known as Bnei Menashe, have immigrated to Israel. The remaining 7,000 wish to join their brethren as soon as possible in relocating to the Holy Land, the act known in Hebrew as aliyah. 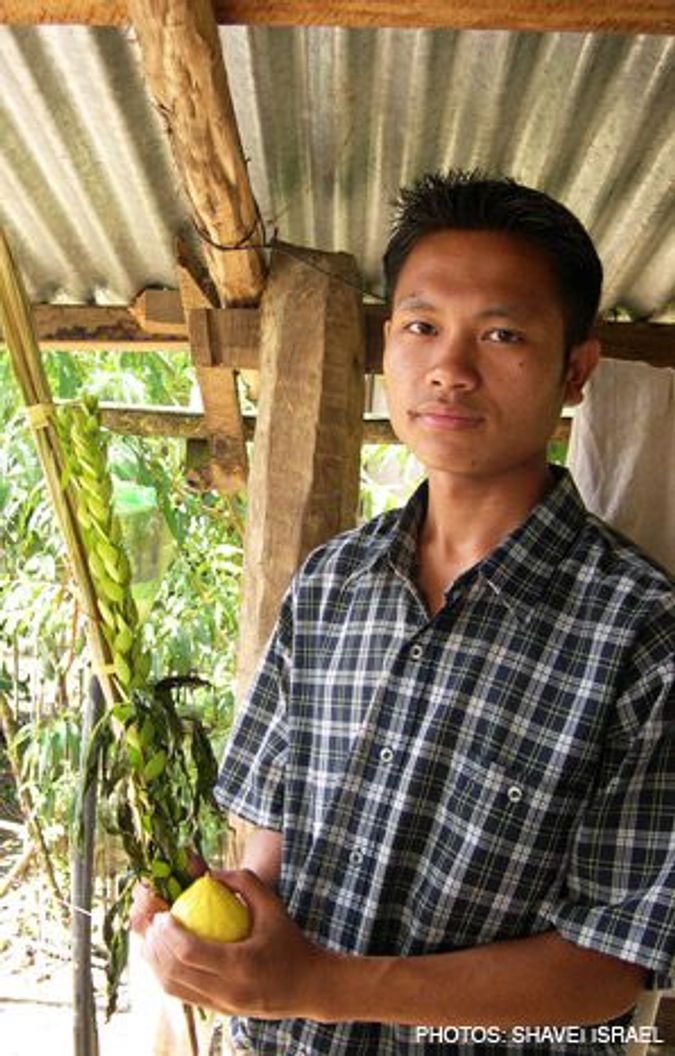 OBSERVANT: A Bnei Menashe in India who is getting ready for the Sukkot holiday. 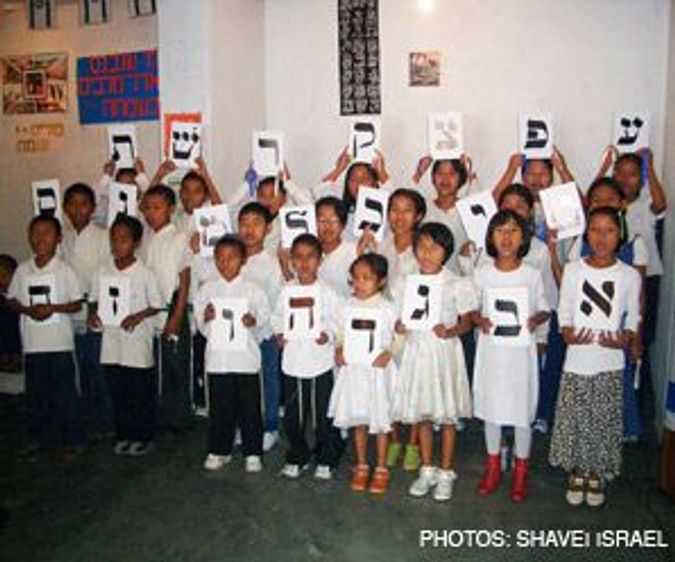 WHEN WE REMEMBERED ZION: Members of India?s Bnei Menashe tribe pose for a camera to show their piety. Their new CD aims to promote their bid for Israeli immigration rights.

Their ambitions are proving more complicated than they thought, however, and so they have released a CD of their music. Titled “Aliya, Aliya…” it is intended to help make the case for their quest and, not incidentally, to help fund the move.

The Bnei Menashe claim descent from the ancient Israelite tribe of Menashe (Manasseh), one of the storied 10 Lost Tribes exiled from the land of Israel by Assyrian conquerors 27 centuries ago. The Israeli Chief Rabbinate affirmed in 2005 that these people are, indeed, of Jewish ancestry, but required that they undergo formal conversion before they can be deemed Jewish under rabbinic law — and thus qualify for immigration rights, in such areas as subsidies and citizenship, under Israel’s Law of Return. In the meantime, they must manage their resettlement on their own.

“Aliya, Aliya” features a collection of 15 songs, performed in Hebrew and in the Bnei Menashe’s local dialect, Thadou-Kuki, and is mostly devoted to Zionist and religious themes. The CD was produced and published by Shavei Israel, an organization that helps descendants of Jews from all over the world to reconnect with their Jewish roots.

According to Shavei Israel founder and chairman, Michael Freund, the Bnei Menashe are “a lost tribe of Israel. They live and practice Judaism, they keep Shabbat, they keep kosher, they keep the laws of family purity, they wear yarmulkes and tzitzit. They have built over 50 synagogues across Mizoram and Manipur.”

“Aliya, Aliya” combines Israeli and Indian styles, and, as its name implies, is a spirited plea for emigration. Some songs, like “Shokhen Ad,” are from the traditional Jewish prayer service, while others, such as the title track, echo the group’s attachment to Israel.

Although the disc showcases some exotic instrumentation, most of the songs are accessible and Western in musical style, with strong hints of modern Israeli music. In fact, though the expectation for a geographically far-flung disc may be a similarly unfamiliar style, the truth is just the opposite: The Bnei Menashe have produced a work that not only pines for the Holy Land, but also emulates Her sounds.

The result is pleasingly familiar, a percussion-heavy interpretation of Western fare. Not nearly as experimental as George Harrison’s famed Indian-style compositions, nor as traditional as the country’s classical raga style, “Aliya, Aliya” is surprisingly mainstream. With much of its material borrowed from Scripture and prayer, the album hits surprisingly close to home.

Shavei Israel is selling the CD through its Web site, www.shavei.org, and has been instrumental in assisting the Bnei Menashe. In addition to facilitating the aliyah of the 1,400 who have already moved to Israel, the organization has assisted with the building of synagogues and mikvehs in India. Shavei also operates two educational centers, one in Mizoram and one in Manipur, that instruct the Bnei Menashe in Hebrew and Jewish culture.

“I first learned of the Bnei Menashe over a decade ago,” said Freund, who served from 1996 to 1999 on the staff of Israel’s then-prime minister, Benjamin Netanyahu. “I made contact with members of the community who’d managed to make it to Israel. I was very taken by them on a human level, with their sincerity and commitment to living as Jews.”

In 2004, at Freund’s urging, Israel’s Chief Rabbinate sent a delegation to India to try and determine if, indeed, the Bnei Menashe hail from a lost tribe.

“The rabbis spent time interviewing members of the community and meeting with some of the locals, learning more about their history and traditions and customs,” Freund said. The delegation submitted reports to Israel’s Sephardic chief rabbi, Shlomo Amar, who in 2005, Freund said, “formally recognized the Bnei Menashe as being descendants of Jews — ‘zera yisrael’ [the seed of Israel] — and [said he] would do what he can to facilitate bringing them to Israel.”

Since the Jewishness of Bnei Menashe is not recognized by Israeli government officialdom, Shavei Yisrael has often had to navigate through layers of bureaucracy to get them to Israel. A typical strategy has involved obtaining permission from Israel’s Interior Ministry to bring groups of Bnei Menashe to Israel for the purpose of conversion and resettlement.

“I think the Bnei Menashe are a blessing for the State of Israel and the people of Israel,” said Freund, who made aliyah himself from New York 13 years ago. “They are honest, decent, hardworking people; they serve in the army; volunteer for combat units, and raise beautiful Jewish children. As much as we try to strengthen them, ultimately they strengthen us.”

Joseph Leichman is a freelance journalist and musician. He writes a blog at www.verbalcalorie.com.

Songs of a Lost Tribe’s Longing