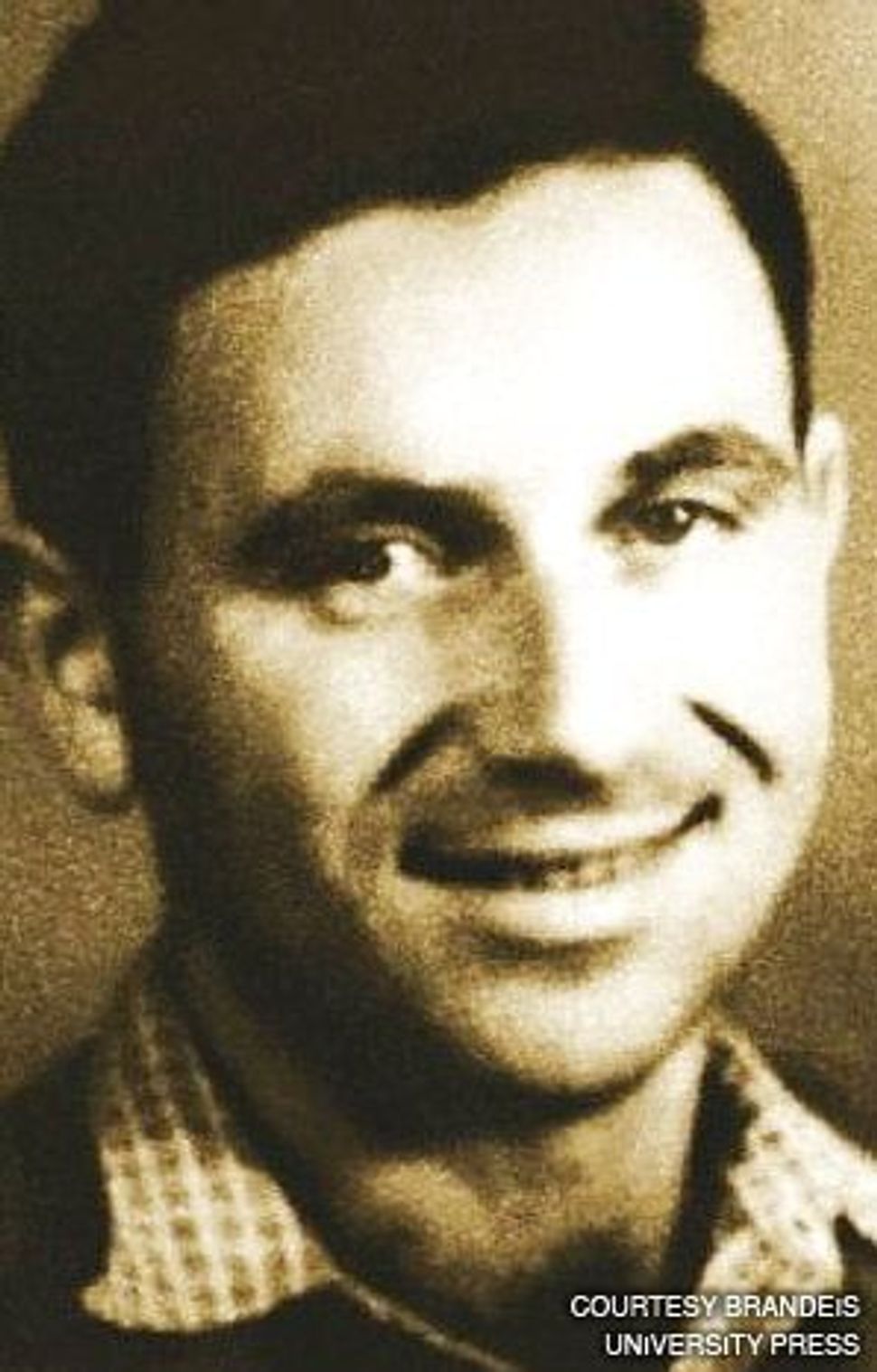 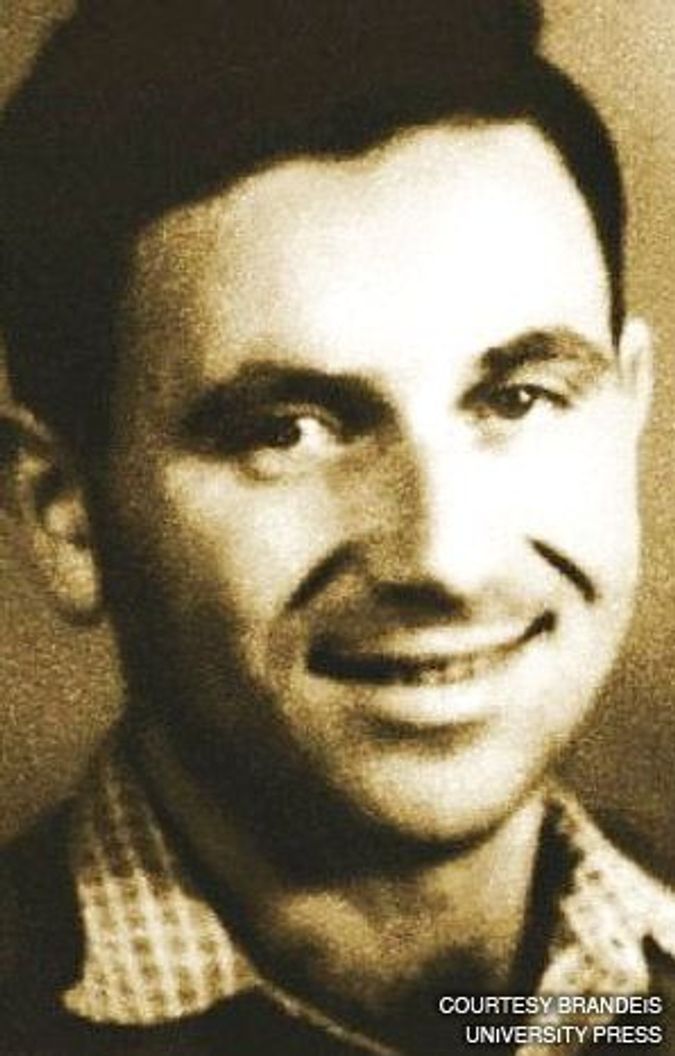 Even to those who have no Hebrew, the name “Yehuda Amichai” might sound like a line of poetry, and poetry, at its best, should communicate through sound alone. But Yehuda is also Hebrew for “Judah,” as in the Lion of Judah, symbol of ancient Israelite military and political strength, and Amichai combines Ami, which means “my nation,” and Chai, meaning “life”: “My nation lives,” the poet is already saying, and he has just been introduced.

Amichai, Israel’s Nationaldichter, was born Ludwig Pfeuffer in 1924 in the Gothic, cobbled city of Würzburg, making German his native tongue. There is no better beginning for a 20th-century poet than to be able to read Rainer Maria Rilke in the original and then to come to write in Hebrew — the language of the newest of states, and of the oldest of Gods. Rilke was Pfeuffer’s model, and not just literarily: Both poeticized their identities; both turned their lives into experiential poems.

Rilke’s reinvention involved a pursuit of his sufferings in Paris and beyond, but Amichai had to make no such special effort: The Nazis came to him, and the entire Pfeuffer family fled the Reich for Palestine in 1936. Amichai’s license, then, involved this second life. From his earliest verses, his poetry was at pains to deny Europe while communicating the author’s connection with the Land. This “Land of Israel” came before the state, of course, just as Amichai would assert that he was a Hebrew poet even when he still thought and wrote auf Deutsch. Since nationalism is an early stage, perhaps the first, in a culture’s evolution, Israel asked its settlers, who were its refugees and its survivors, too, to shed their former selves. Not only were languages forgotten, but old habits and traditions were, as well, while the modern division between poet and soldier faded just as the distinction between sea and sky fades on clear days on a Mediterranean beach.

Here is Amichai’s most famous poem, perhaps — “Half the People in the World” — in a translation whose faults are my own:

Half the people in the world love the other half, half the people hate the other half. Must I, because of this half and that, go and wander and ceaselessly change, like rain in its cycle, and sleep among rocks and become rugged like the trunks of olive trees, and hear the moon bark at me, and camouflage my love with worries, and grow like frightened grass between the railroad tracks, and live underground like a mole, and be with roots and not with branches, and not rest my cheek upon the cheek of angels, and make love in the first of the caves, and marry my wife beneath a canopy of beams that support the earth, and act out my death, unto the last breath and the last words, always and without understanding, and put flagpoles atop my house and a bomb shelter underneath. And set forth on those roads made only for returning, and go through all the terrifying stations — cat, stick, fire, water, butcher — between the kid and the Angel of Death?

Half the people love, half the people hate. And where is my place between such well-matched halves? And through what crack shall I see the white housing projects of my dreams, and the runners barefoot on the sands or, at least, the flutter of the girl’s kerchief, by the hill?

Amichai read this poem at a ceremony honoring Yitzhak Rabin on the occasion of the awarding of Rabin’s Nobel Peace Prize. The Würzburg poet first had to go to Jerusalem to get to Stockholm — “the terrifying station” — but only for the honor of another.

Nili Scharf Gold, a University of Pennsylvania professor of Hebrew literature, has written a biographical study of Amichai that unpacks not only this poem but also many of the others, while purposefully obscuring, or reinterpreting, the poem that was the poet’s life. Her detailed, generously neurotic work is determined to remind us that Amichai was not a Sabra but a German whose Hebrew was conscious, and secondhand. In the poet’s own private words, which Gold culled from gray notebooks hidden away in a Yale University library, Amichai versteckt sich zwischen den Sprachen — he “hides himself between two languages.”

Not content to merely generalize the sorrows and success of displacement, Gold gives us examples of this hiding. Rooting around in these previously unaccessed, or inaccessible, Amichai archives, she has found poems that were originally drafted in German, whether in whole or in part. “Half the People in the World” was one of those, apparently, and its original, while fragmented, is often more effective than the Hebrew that has become canonic. Gold explains that the strange recursion of the poem’s structural question doesn’t make Hebraic sense. Amichai’s twisted syntax asks, “Must I, because of this half and that, go and wander and ceaselessly change?” But Ha’im biglal ele v’ele alay can be explained, she says, only by the inverted interrogatives of German: Muss ich? “Must I?” Amichai’s original-original” reads beautifully, idiomatically: “*Muss ich nicht dauernd…”

What is telling, however, is not that Amichai wrote a score of his greatest poems in German, but that he never admitted this, right up to his death in 2000: that he, in fact, seemed invested in concealing this practice, in camouflaging the deepest of his thinking behind an assumed birthright, or “local color.” Indeed, the only Hebrew words in the first draft of “Half the People” are atsey zayit, meaning “olive trees.”

The aforementioned logomachy should tell you that Gold’s study is for those interested in language and in the subtleties and small triumphs of translation. It is to Gold’s credit, however, that she spares us talk of the pain and loss of estrangement, instead insisting that pain and loss are made of language and that, as Ludwig Pfeuffer knew, to be an Israeli is essentially to translate.

Joshua Cohen is the literary critic of the Forward.