For The Anniversary Of The Hitler-Stalin Pact, A Look Back 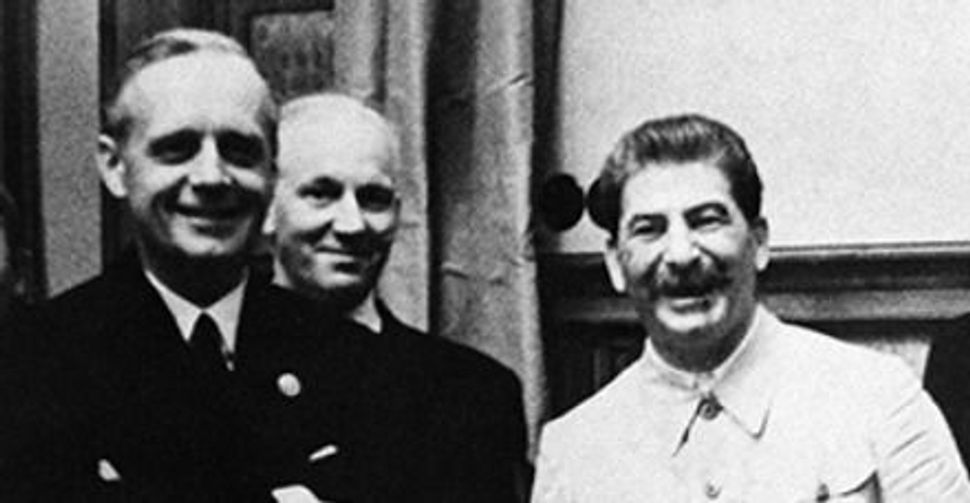 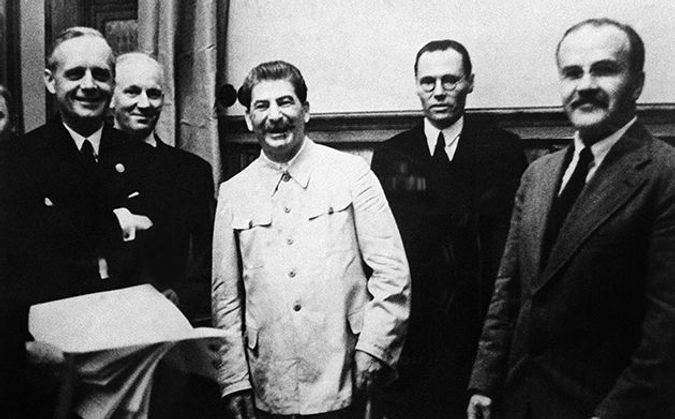 Editor’s note: This piece, included in Ada Pagis’s collection of short fiction “A History Lesson” and translated into English by Tsipi Keller, was originally published on August 19, 2011. It was republished on August 23, 2019 to acknowledge the week of the 80th anniversary of Hitler and Stalin’s non-aggression pact.

In the German war archives, recently made available to researchers, there’s a copy of a photograph that was taken during the ceremonial signing of the treaty known as the Ribbentrop-Molotov Pact. It was signed at the end of August 1939 and rescinded by Germany two years later. War broke out between the two erstwhile allies and refueled the global flames, already blazing. Millions were murdered. At around the same time, the opening sign was given, facilitating the methodical destruction of European Jewry.

The ceremonial photograph is well known, featuring the host, Stalin, flanked by the foreign ministers of both countries, as well as a coterie of a few unidentified characters in the background. Also well known are the motives and deeds of the main actors. But what stirs me is another image, one that I have made from the ceremony; it’s one that, for me, is no longer just a mute photograph. I derive a sadistic-masochistic pleasure from what it tells me, a source of dubious comfort-games I enact for myself — a stab at vengeance, if you will.

The new allies have just signed the nonaggression pact and its attached secret appendix, outlining the division of territories in Central and Eastern Europe, including what the Poles would later label as the fourth division of Poland. It seems that the gentlemen have already toasted each other’s honor with several vodka shots, helped down with caviar. After which, they arranged themselves before the camera, following the instructions of the Kremlin photographer.

Stalin is placed in the foreground so as not to call attention to his stunted physique as he stands next to the glitzy figure of Joachim von Ribbentrop. It seems that someone must have delivered himself of a pleasantry — very possibly the host himself, because he is the only one who looks very pleased with himself, smiling his crafty smile, a peculiar blend of glee and irony, contentment and malice.

Next to him is Vyacheslav Molotov, somber as ever, displaying his famous stone face and hiding behind rimless eyeglasses. Molotov has been with Stalin since the very first days of the revolution. Lenin was also impressed by Molotov’s ability to work 24 hours a day, so he dubbed him “an ass made of stone”; brilliant Trotsky simply called him a dumbass. But Stalin had recognized in him an ace organizer. Molotov is the one who maneuvered the other party leaders and then retreated, ceding control to Stalin. During the collectivization program, he was Stalin’s right-hand man. Efficiently, he uprooted 50,000 kulak families, loaded them onto cattle cars and dispatched them north. The lackluster years as the head of the Foreign Ministry diminished his standing somewhat, but his talents as an obedient underling prevailed. He never revealed his thoughts, and therein lies his famed silence that so confounded the foreign diplomats, who couldn’t have known that he wouldn’t even blink without Stalin’s say-so. Even his famous “Nyet” “had to be uttered first by the boss, and only then did he permit himself to repeat it assertively.

“A tamed dog, a lackey,” Stalin mutters to himself in Gruzini. “After all, he is a diplomat, and an occasion such as this requires him to show some flexibility and social grace. Rigidity in a foreign minister can only harm our cause.”

“A damned Gruzini, a mad son-of-a-whore,” Molotov says, seething inside and casting a worried glance at Stalin, fearing that the boss can see into his heart. For years now, his wife has been languishing in a work camp, together with the wife of the Soviet Union President Mikhail Kalinin. “Does he think, this pockmarked son-of-a-bitch, that he and his revolution are more important to me than my wife?”

In the background, one notices the defense minister, Marshal Klement Voroshilov. He’s open faced and looks youthful, ingenuous. A locksmith by trade, he, too, has clocked time with Stalin. Excepting Marshall Budioni, the hero of the civil war who kept his position but whose wife was detained, Voroshilov is the only one from among the senior commanders who survived the army purge. His wife, too, was spared. Under the rows of shiny medals, a plain cotton peasant undershirt is visible, the undershirt of a hero of the revolution. During the purging of the senior commanders, Budioni mercilessly removed 47 of them and oversaw their execution.

“A gullible lamb, the people’s darling. When I did away with the Trotsky-infected scum, I spared him, and I’ll continue to keep him as a memento,” Stalin, smiling contentedly, jokes with himself, the only partner who can appreciate a good joke. “For years now, to fool the people, I’ve allowed him to play minor symbolic roles and to display his medals before the foreign correspondents. But considering the conciliatory tone of the German delegation, I may decide to use him when we attack Finland.” Stalin, pensive, winks at Voroshilov, who is both astonished and flattered.

Near the marshal stands Stalin’s confidant, Lazar Kaganovich, a shoemaker from a Jewish village. It is Molotov who had first discovered him and then introduced him to Stalin: “Yes, he’s uneducated, but very industrious and loyal to me, serving as my Railroad Transportation minister. But why in hell doesn’t he do something about his hook nose? The Germans can’t stand them.”

With Ambassador Schulenburg at his side stands the foreign minister of Germany, von Ribbentrop: tall, taut as a chord and glamorous, with Wehrmacht paraphernalia sparkling on his military uniform. The Führer has empowered him to accept Stalin’s territorial demands. He recalls his final conversation with the Führer: “He wants concessions in the Baltic states? So be it. He wants Bessarabia and North Bukovina? Sure, let him choke on them. He desires half of Poland? Why not let him have it? Eventually it will all be part of the Reich.”

Clownish Stalin, inebriated, made him toast the Jew Kaganovich and then stuck a glass in the Jew’s hand and made him toast Hitler. No end to the mischief of this joker, this new ally. In conclusion, he even promised to return to Germany, directly into the Gestapo’s hands, the 150 German and Austrian communists, who had fled to the Soviet Union when the Nazis rose in their countries and who are now serving time in gulags, accused of spying, sabotaging and the like. The Führer has charged him with a very delicate diplomatic mission.

“Yes, each mission, however important, often entails such unsavory moments, but one must exercise self-discipline, even if it is not every day that I get to be chummy with a bunch of Asiatic lowlifes,” von Ribbentrop says, consoling himself, trying to hold back the revulsion rising in his throat.

Ada Pagis is the widow of the poet Dan Pagis. She was born in Poland, lived in the Soviet Union during World War II and, at age 13, arrived in Israel. She studied literature and history at Hebrew University of Jerusalem, where she later taught.

Novelist and translator Tsipi Keller, born in Prague and raised in Israel, has lived in America since 1974. Her literary awards include a National Endowment for the Arts Translation Fellowship.

For The Anniversary Of The Hitler-Stalin Pact, A Look Back