The Science of Education 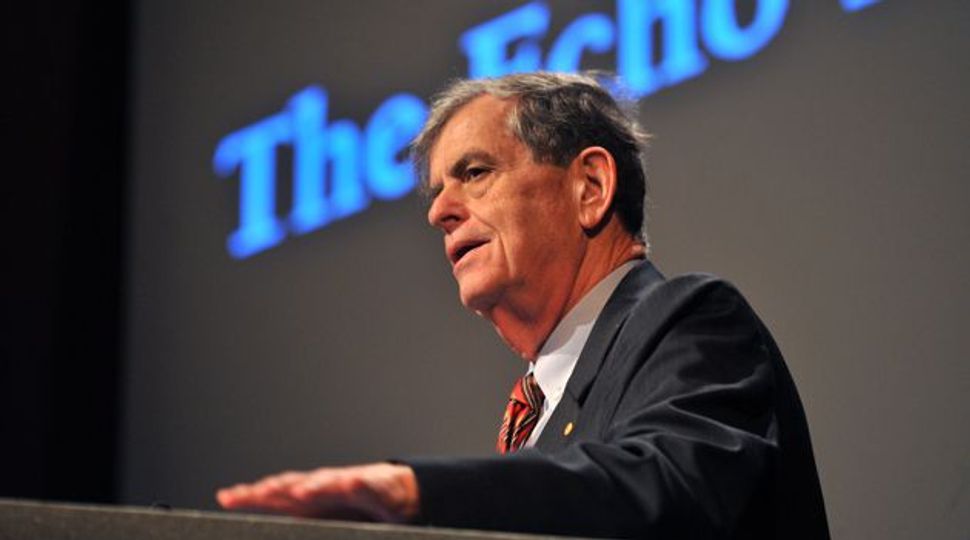 When biochemist Aaron Ciechanover surveys the education landscape in his native Israel, he is invariably disappointed by the diminishing emphasis he sees being placed upon math and science curricula and by the limited access to higher learning granted to those who can’t afford it. Ciechanover shared with two colleagues the 2004 Nobel Prize in chemistry for their discovery of a process by which proteins are tagged for destruction within a cell.

Ciechanover, who is a professor in the unit of biochemistry at the Technion in Israel and former director of its Rappaport Family Institute for Research in Medical Sciences, traverses the globe, underscoring how education can be both the driving force behind economic growth and the solution to some of society’s most pressing problems.

In April, Ciechanover visited North Carolina at the invitation of the humanitarian organization the Echo Foundation as part of a program connecting global leaders with area high school students. While there, he spoke with Forward correspondent Michael J. Solender about his views on Israeli education.

Michael J. Solender: What changed for you upon winning the Nobel Prize?

Aaron Ciechanover: The discoveries that we made, for which we won the Nobel Prize, were made in 1978 to 1983. From the mid-1980s through 2004, I was, I believe, a successful scientist that was left alone to work in his laboratory, and nobody asked me about education, values, etc.… [Then] all of a sudden… I became a celebrity for something that nobody recognized before.… People ask: “What do you think of Beethoven? What do you think of the space shuttle of America? What do you think of painting? And of education?”

What led to the erosion of leadership that you have said is responsible for Israel’s lacking education system, and what will it take for a resurgence?

Well, the teachers’ status has deteriorated in Israel…. The salaries are very low. They are ranked low socially; they have to look for a second or third job to make a decent living.… [Yet] having a leading educational system is essential for our existence.

For me, it’s not only the damage made to the State of Israel, which was leading in the field of education at one time and had exceptional human resources, but also kind of a betrayal in the centuries-old Jewish tradition that valued scholarliness.

Jews have evolved scholarliness in the Diaspora as the only way to survive. This is the one thing that kept them alive for many years. Throughout history, they were forced to move from place to place, had no right to own property and they had nothing to take. They were allowed to own their head, so they perfected the art of improving it.

Exactement. The yiddisher kop. So here comes the Jewish state and erodes this value. There are several reasons for this. Some of them have to do with the fact that we feel safe: Once we have the land, the “Diaspora” values are less important. The leaders in Israel, especially those we have had in the recent two decades that grew up in Israel, appreciate education much less than the founding leadership that came from Europe. [But] the leadership is the mirror image, in many ways, of the people of Israel.…. The Israelis feel that they are walking on their own land, and are not persecuted. They have a strong army; they can beat their enemies. So the kop is needed for other things, maybe.… As for the current generation, it is clearly a generation with different values, more oriented towards materialistic values. Many are superb, truly exceptional.… What I see among the students of the Technion is still the crème de la crème.

But education is not for the crème de la crème…. We cannot afford [to educate only] the 5% of the students of the Technion or the students who are enjoying Hebrew University; we need to educate in the rest of the country. Unfortunately, in Israel we have a broad geographic and social periphery that does not enjoy, and cannot afford access to, sophisticated educational systems, and they remain far behind. These people, which are not a minority — on the contrary — must be educated, all of them.… This is our obligation to the growing part of the underprivileged in the Israeli society.

Why did you return to Israel after studying at the Massachusetts Institute of Technology and having numerous offers in the United States to teach and to conduct your research?

The American university system is flooded with people like me. In Israel, we are a small country. I can have greater influence in the area of education, and as we mentioned… people are listening to me.

You’ve written that your parents raised you to be a citizen of the world. For today’s young people, what is required of that citizenry?

As for global citizenship, we are living in a competitive world. Our education systems need to prepare students for this new and increasingly interdisciplinary world. Students need to learn beyond chemistry, beyond physics and biology.… It is not sufficient to develop technical expertise in singular fields. We need to command one field, but also a bridge to fields that will connect us to the rest of the world, like business administration.…

We need to approach education in the way that real problems in the world get solved these days: though an interdisciplinary and team approach.

Have you ever experienced a crisis of faith stemming from your work as a scientist?

Accepting scientific proofs does not mean that one cannot have some kind of a belief.… For myself, I was born Jewish.… For me, my religiousness is Jewish culture…. Philosophically, God cannot be defined in any human terms, as whatever he is, he is beyond us, and each of us has his own God in his or her heart.

Can science, religion and morality complement one another?

Science is the peace that should be common and accessible to all of us…. [But] when scientists try to satisfy a totalitarian regime like that of Hitler or Stalin, it betrays its very basic principles of pursuing the truth — and it is not science anymore.

Unfortunately, a large part of the world is nondemocratic, so science cannot flourish there, and it can serve an evil regime.… A killing bullet costs only 10 cents or less, where the treatment for someone like your Congresswoman Giffords will cost millions of dollars to only partially restore her to the way she was before that tragic shooting. This internal paradox within one society of developing the best in medical treatment on one hand, but have no value to human life on the other, is something I find hard to grasp.

You chose to put your career as a physician on hold to go back to school to become a research scientist. What lessons are in your story for young people?

So the lesson is to never get stuck doing something you don’t like. Don’t follow the wishes of your mother, unless this is really a pursuit you want to make.

Michael J. Solender, a writer based in North Carolina, is the city life editor for Charlotte Viewpoint, a not-for-profit online arts, civic and culture magazine. He can be reached at [email protected]

The Science of Education