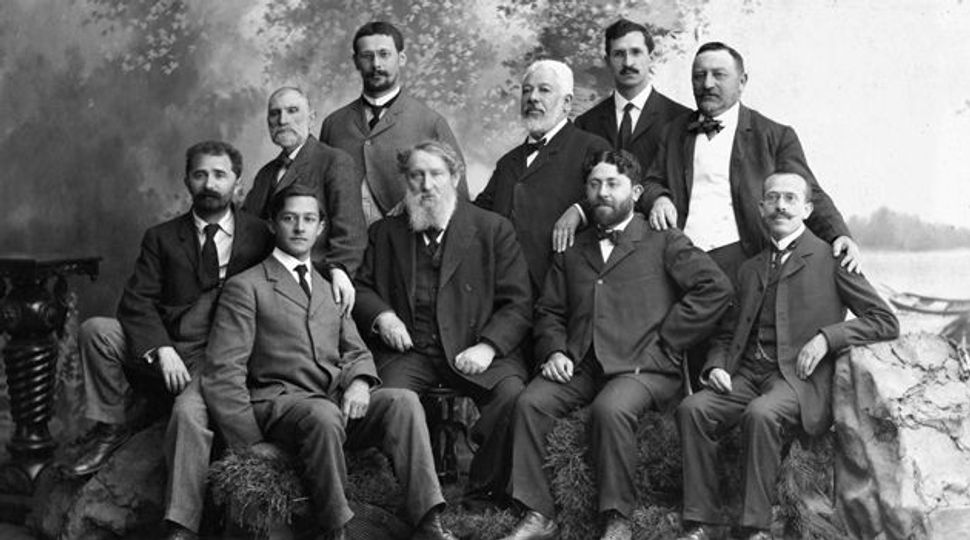 In the early years of the 20th century, Samson Benderly stood with the legendary figures of American Jewish life: He was recruited to New York by Judah Magnes; he knew Henrietta Szold and Barnett Brickner; he battled Solomon Schechter; he met regularly with his benefactor, Jacob Schiff, and his closest friend was Mordecai Kaplan. Indeed, Kaplan wrote of Benderly, “He is to me the most positive force in Jewish life today.”

It is not an exaggeration to say that this volume is the most important piece of historical writing about American Jewish education to have appeared in a generation. Although many fine scholars have written about various aspects of Jewish education in America, no one until now has taken such a comprehensive view of it. Krasner’s book delves deeply into the crucial period of the field — the 20th century — and contextualizes the history of American Jewish education both within Jewish life and within modern education. The wonderful collection of photographs on display throughout the book adds to its charm.

Benderly, born into a traditional Hasidic family in Safed, arrived in America in 1898 from Palestine. Though he came to Baltimore for medical studies, he was drawn to Jewish teaching and eventually left medicine to become an educator.

Benderly was a visionary and was capable of inspiring others to follow his vision. He developed around him a group of remarkable young people who shared his excitement about changing the face of American Jewish education. These were the “boys” of the book’s title: Alexander Dushkin, Isaac Berkson, Emanuel Gamoran and many others. Krasner also points out the importance of a group of “Benderly girls” (such as Rebecca Aaronson Brickner and Libbie Suchoff Berkson), many of whom had important careers in Jewish education, though most of them did not go into the work of institutional leadership, which was more characteristic of male career paths at the time. An excellent companion to this book, therefore, is the 2010 book “The Women Who Reconstructed American Jewish Education, 1910–1965” (Brandeis). Edited by Carol Ingall, it comprises portraits of influential female Jewish educators.

When Benderly began his work, Jewish education was a hodgepodge of disorganized institutions, profoundly incompetent teachers, nonexistent textbooks and undefined curricula. Studies were often conducted in “dilapidated, dark, stuffy, and often filthy conditions.” Benderly’s main mission was to organize, modernize and Americanize Jewish education. He was, despite his traditional upbringing, a cultural Jew, and he saw Jewish education in the light of Ahad Ha’am’s Zionist dream and his focus on Jewish peoplehood. Therefore, Benderly placed a strong emphasis on Hebrew-language acquisition, with a focus on the Hebrew of the modern world, not that of the synagogue and traditional texts. It was Benderly more than anyone else who promoted the “natural method” in Hebrew education, using the approach that has characterized the ulpan, or Hebrew language school, in Israel and “immersion” techniques in foreign language learning today that have a strong emphasis on conversation and comprehension in real-life situations. In addition, Benderly introduced “technology” into Jewish education, developing magic-lantern (an early type of image projector) slides to use in instruction on Jewish holidays and the Bible. (If he were alive today, it would be fair to assume that he would be promoting social media and the Internet as means for Jewish education.)

Benderly also insisted on a system for training and accrediting teachers. He wanted to apply the findings of educational “science” (what we today would call “research”) to Jewish education. And he strove to create an organized, centralized system of support for, and supervision of, Jewish education, dealing with curricula, standard hours and classroom environments. He also understood the importance of the “informal” aspects of education, and one of his disciples, Albert Schoolman, was the prime mover in creating what is arguably the greatest and most original contribution of American Jewish education: the summer educational camp. All this flowed from Benderly and his followers.

Although many of Benderly’s dreams were not fully realized, Jewish education came onto the agenda of the leadership of the American Jewish community through his efforts and those of his followers. And, if nothing else, in recent years the discussion about Jewish education has become even more prominent than ever before.

Krasner’s book is precise in documenting some of the enduring problems of Jewish education, highlighting, in Benderly’s time, some of the same issues that still haunt us today: the quality and training of teachers; the tension between students’ secular education and their Jewish education; the environment in the home and its support or lack of support for Jewish education; the eternal funding issues at the communal level; the battle over Hebrew language; the complicated relationship between Jewish community federations and Jewish education. “The Benderly Boys,” therefore, is essential preparation for seeing how we came to where we are today, for both good and ill.

Although Krasner’s work focuses on what is arguably the core narrative of 20th-century American Jewish educational history, there are many aspects of the story that the volume was not able to address — themes and events that await other works of scholarship. Education in Orthodox and Haredi communities are examples, as those worlds grapple with issues related to the education of women and to “elite” versus “folk” education. Another unaddressed event is the growth of day schools, particularly outside the Orthodox world. The book does not cover adult Jewish learning or the growth of Israeli education as a field and a focus.

Although Krasner looks at the beginnings of the communal and organizational side of Jewish education in the 20th century, no historian has comprehensively studied what has happened over the past two decades to the very system that Benderly and his boys helped create: the centralized, communitywide agencies responsible for Jewish education, whose role and function have changed radically. A striking indicator is the several name changes that have occurred: What started as the The Bureau of Education of the New York Jewish Community — the agency Benderly came to New York to create — is now, after several name changes, the Jewish Education Project. The sense of stability and authority conveyed by “bureau” has now evolved into something as ephemeral as a “project.” And the official-sounding imprimatur of “New York” (as if it was almost a quasi-governmental agency) has completely vanished. This alone says a great deal about the changes in the structure of American Jewish education today.

Finally, Krasner’s focus on the personalities of Benderly and his followers makes one long for biographical scholarship about other great figures of Jewish education whose work has not been well documented, including such individuals as Shlomo Bardin (founder of the Brandeis Camp Institute), Louis Newman (founding principal of the former Akiba Hebrew Academy in Philadelphia, among many other accomplishments) and my own teacher, Seymour Fox, both a thinker and an institution builder, quite possibly the person closest in charisma and vision to Benderly that I have ever met.

“The Benderly Boys and American Jewish Education” is an outstanding work of scholarship. It has a strong narrative drive, yet captures the big themes beyond a mere recitation of facts. Superbly documented and compelling, this work establishes Krasner as the leading historian of American Jewish education for the present generation. I eagerly look forward to what he will produce next and what his work may inspire in other scholars.

Barry W. Holtz is dean of the William Davidson Graduate School of Jewish Education and the Theodore and Florence Baumritter professor of Jewish education at The Jewish Theological Seminary.