God of Judgment, God of Love 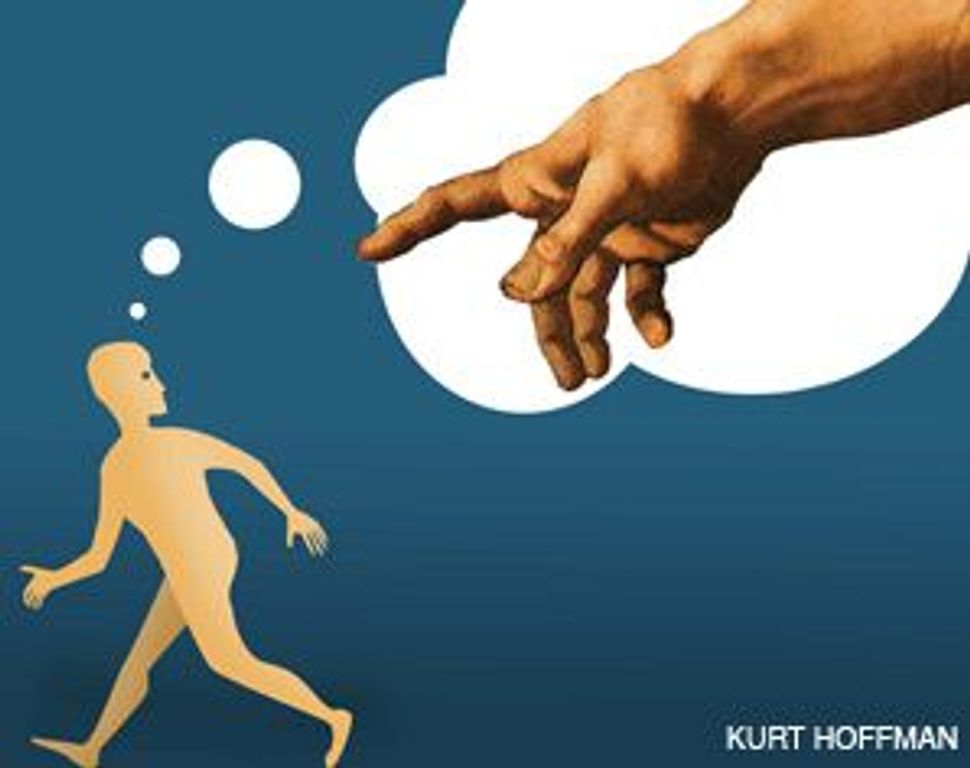 As the season of repentance approaches, our Jay Michaelson offers some thoughts on the meaning of judgment, forgiveness and love, and how to think of the Infinite to whom the new year’s prayers will be directed. 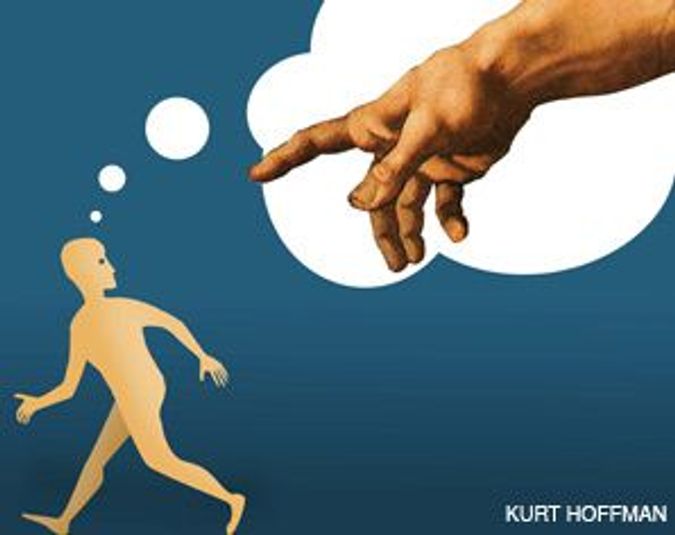 Every year at this time, for at least the past decade, I have struggled with the theology of atonement, the liturgy of repentance and the challenge of tshuvah, return. When I was a child, and into my teens and 20s, the imagery was effective; I didn’t think there actually was a Book of Life up there in the sky, but I appreciated the metaphor. I felt myself judged on Yom Kippur, impelled to repent of various sins and shortcomings.

Later, though, the metaphor became cloudy. As I came to accept my sexuality, I saw that much of what we ascribe to noble motives of repentance was really guilt warmed over. Not only did the wicked thrive — the old problem of theodicy, reflected in the books of Job and Jonah — but they also seemed to be better-adjusted than some of the pious. I started to wonder whether it was even a good idea to fast and introspect in this way.

This is not, strictly speaking, a theological question; it is a psychological one. Let us set aside the question of whether God actually exists. We know, most of us, that images of God are metaphors, for our benefit: If God exists, then God is beyond all ascription, all image. And if not, then these are just stories we tell ourselves. Either way, the question is whether this particular image — the judging God — is helpful or harmful. Put another way, which is better to name as an experience of God: that of love or of judgment?

To be sure, it’s not an either/or decision. In Jewish tradition, God is the dayan emet, the true judge, and harachaman, the compassionate/womblike one. God is Mother, Father and Friend; Teacher, Consoler and Lover. For that matter, God is Everything and Nothing, Immanent and Transcendent, Earth and Sky. Surely the kabbalists were right that, experientially, we humans relate to the infinite according to traits, genders, energies and perspectives that are different for different people and at different moments.

It is not that the judging God is the only God-image we have. But on Yom Kippur, He (and He is a He) is the dominant one. So the question remains: Is it a good image to have, or a bad one?

Today, many object to the image of the judging God on the grounds of history: How can we speak of a God who judges in the wake of the outrage of the Holocaust? Surely, this objection argues, whatever we may wish to say about God, we cannot say that God judges fairly. Others object to the image on the bases of gender, politics and family psychology: This judging God is like an abusive father (or husband), they say, meting out punishment and doling out rewards from above. We would all be better off without such an exemplar of abuse, patriarchy and hierarchy.

Still others, and I may be among them, object to the image of the judging God on spiritual and psychological grounds. Is it really such a healthy thing to feel oneself to be inadequate, judged and deficient? Does it really make us better people, or does it just make us tougher, more defensive and more judgmental ourselves? Does it comport with mystical experience, which radiates acceptance and compassion? Does God judge us, or only love?

I do not have a neat answer to these questions, but I want to suggest that while the judging God is an image of God that is experientially accurate, it is ultimately something to be transcended.

First, guilt is part of human nature, and not an entirely bad part; it keeps us honest, checks the ego, and reminds us that we all have the capacity to be selfish and cruel. The judging God, in this light, is simply the superego projected toward the heavens; it accords with our experience of remorse. And as a form of social control, it is an effective story that doubtless keeps many of us from acting on our baser instincts. It just needs periodic updating from time to time.

But the essential part of this image, particularly on Yom Kippur, is that it is not a static one. God judges in order to inspire us to change, in order that God can forgive. Again, let’s stay with experience, not myth. The point is that we judge ourselves so that we can introspect, right our wrong behaviors, taste the sweetness of forgiveness — and then move on. The catharsis of Yom Kippur serves its function and then ends. The shofar is sounded, the book is closed, the process is complete.

This is where so much Jewish practice, it seems to me, goes off the rails. Well, the book is really open for another couple of weeks. Well, God is always watching you, and always judging. Well, you never actually deserve to be forgiven; God just extends mercy to the undeserving. No wonder our Christian sisters and brothers threw up their hands and said you never can win unless a savior comes and saves you. The deck is stacked against us.

And it has a way of never ending. I remember, during my more observant days, debating whether to eat un-hekhshered (non-kosher-supervised) cheese, a legal debate that goes on within the Conservative movement to this day. Believe it or not, I really racked my brain and searched my heart over this technical halachic issue. The rules seemed nonsensical. But was I just trying to rationalize doing what I wanted? Did God really care? Was the system out of whack, or was I being lazy and indulgent?

I shared some of this struggle with an Orthodox friend of mine. She laughed at the story, because while eating “nonkosher” cheese was beyond the pale for her, she was having the same internal debate about eating dairy products that were not “cholov yisrael,” or watched by a Jew at all times. The legal issue was different, but the pattern of soul-searching and guilt was the same.

Today, the whole thing looks like neurosis. Yes, there’s a certain nobility to suffusing every aspect of one’s life with holiness, and in participating in a millennia-old tradition of law. But all this angst — about cheese! Couldn’t the emotional energy be better spent on giving more money to the poor, rectifying the sins of racism and sexism, or, well, just about anything? Is the sense of God’s judgment helping us do what’s right or making us neurotic about anything and everything?

The narrative arc of judging-introspection-forgiveness remains, for me, an important one, because it calls attention to my own tendency to judge myself and to my attendant need to forgive. But if it gets stuck in the middle, it turns into craziness.

If it weren’t tragic it would be funny. Because with judgment comes — if we judge ourselves worthy — arrogance, self-justification and the judging of others. Or — if we do not — self-hatred, anxiety and defense mechanisms aplenty. We make ourselves tough, argumentative and always right, because we fear that otherwise we will be found lacking.

The judging God is a stage along the psychological path, both individually and communally. It is important to hold ourselves to a high standard of ethical, and possibly ritual, behavior. But at a certain point it becomes more important to forgive ourselves for not meeting that standard — and, as a culture, to learn to be more loving and understanding, rather than judgmental and strict. Of course, there are always personal and political instances where strictness is appropriate. But do we really think that what the world needs now is more judgment?

It’s a shame that so many Jews go to synagogue only on the Days of Awe. I wish they would turn up for the Days of Love, Rest and Celebration (Sukkot and the Sabbath are good starts, as are meditation retreats). Those, it seems to me, are what we need more of: more love, more authenticity, more openness. And they yield experiences of something that deserves to be named as “God.”

When love, rather than judgment, fills my heart, I see a natural world that we are lucky to inhabit, in bodies that are miraculous in construction, and I feel loved in return. I feel the imperative to pursue justice, not out of judgment or toughness but out of compassion. Terrible things still happen. But I feel God’s presence in the companionship and response to such adversity, in intimacy, in love, in the healing and the mending.

God of Judgment, God of Love