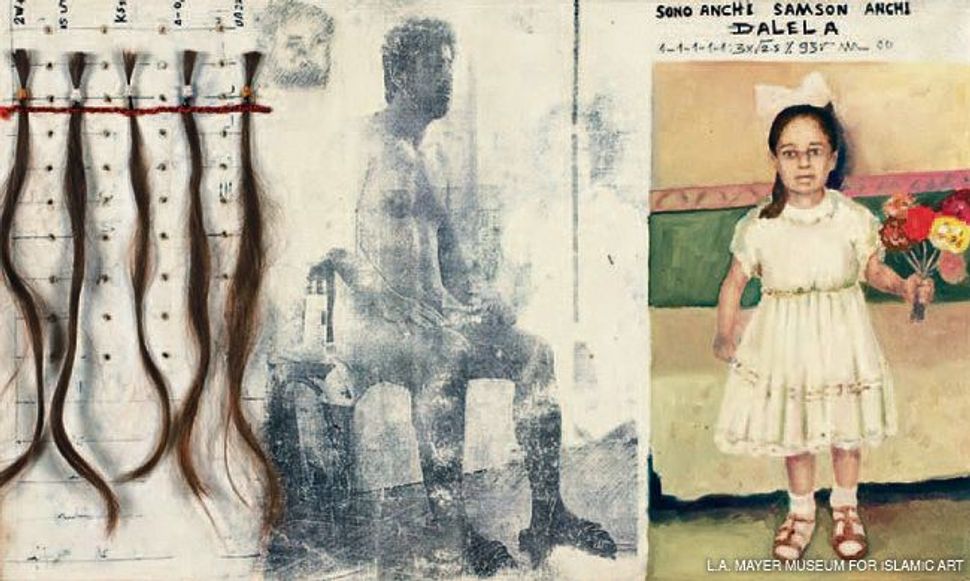 Opening a new exhibition of Arab Israeli art in Jerusalem — the first of its kind at any Israeli museum — are three etchings from the 1970s by Walid Abu-Shakra. At first glance they appear to be simple etchings of a village landscape: desolate and dry, absent of humans, perhaps the remains of an evacuated village. But it doesn’t take long to realize that the village landscapes are not as innocuous as they seem: Each is divided by a stone wall draped in dead foliage.

These bisected landscapes serve as a perfect introduction to this exhibition of 13 Arab-Israeli artists that runs through January 2009 at the L.A. Mayer Museum for Islamic Art. At once organic and lifeless, the divided images hint at the rifts that separate Jew from Arab, Arabs from each other and, most of all, the internal rifts that often complicate Arab-Israeli identity.

“The day will come when we will no longer see these beautiful landscapes, because man awaits behind the door to seal their fate,” Abu-Shakra used to tell his friends. Forty years later, his words sound especially prescient. In that time, the separation barrier has become a permanent fixture in the desert landscape, and the relationship between Israel’s Arab minority and Jewish majority has grown increasingly fragile. Though Israeli by citizenship, the majority of Israeli Arabs (many of whom refer to themselves as “Palestinians with Israeli citizenship”) are widely believed to identify with the Palestinian cause, and yet see themselves as their own, unique entity.

These dualities provide fodder for much of the art currently on display. Western culture and traditional Arab art coalesce here (and sometimes butt heads), as do the personal and political, to form a broad range of works that introduce Israeli-Arab art to a public generally unfamiliar with it.

Called Correspondence, the exhibition is the first to feature, and be curated exclusively by, Arab-Israeli artists at a public Israeli museum (though there have been similar shows at private galleries). As the title suggests, these artists are trying to navigate where exactly they fit in a world of conflicting traditions and narratives. The result is not always simple.

To his delight, Farid was given the go-ahead by the museum, whose permanent collection includes art from the sixth century to end of the 18th century, along with complete freedom to curate the exhibition from start to finish.

“I thought the Israeli public should be aware of the problems and the subjects and try to understand what is bothering them and what they are dealing with,” said the artistic director of the Mayer Museum, Rachel Hasson. “Israeli Arabs are part of us, they are living among us, and not to exhibit their work is a way to ignore it. Some can write songs and poems, and a painter can put on a painting what he feels, and we should all know and acknowledge it.” Many include references to collective experience and pain, be it in Ahlam B’soul’s photos of lost villages, or in the broken ceramic “breads” of Mervat Essa or Buthina Abu-Milhem’s embroidered tunics laced with needles, from her series “The Needle Vanquishes the Sewer.” In all these pieces, tradition is presented as a double-edged sword: worth preserving, but a burden all the same.

Some of the artists included here are more political than others — for example, the work of Khader Oshah’s series “The Family” features animal hides inscribed with poems of the recently deceased Palestinian poet Mahmoud Darwish. The portraits of his family and the family of a Jewish friend that emerge from the texts, and a series of numbers inscribed at the bottom of each hide, will no doubt serve as a reminder of the Holocaust to the Jews who see it.

But some of the most provocative works are those that question customs and norms within the Arab culture, including gender roles and the patriarchal structure. In his work “Myself and I,” Asad Azi tells the story of being raised as a girl until the age of 6 to honor a pledge his parents made to the Prophet Jethro after Azi’s three brothers died before birth. A double portrait features the artist as a grown man next to an image of him as a young boy dressed as a girl, and attached to the portrait are long strands of his hair.

One is unlikely to find art of this kind — that touches on sensitive issues, such as gender and superstition — exhibited across the Green Line in the Palestinian territories. Art there is focused largely on the occupation and resistance to it, Farid said.

“The language here in Israel is much more open, and also for those who learned in Europe, where the sky is the limit, but in the Arab world they create tight boundaries and squeeze you.”

Trained largely in Israel or abroad, Arab-Israeli artists work with a multitude of artistic languages, combining traditional Arab symbols and modes of expression with current Western ones. Where to draw the line, how much to embrace tradition and/or modern Western culture, and how much to question that tradition or culture — these are some of the questions their work tries to explore.

“Israeli-Arab artists are different from Palestinian artists and Arab artists elsewhere in terms of the development of their subject and idea, and the way they create,” Farid said. “The combination of two cultures creates a third element, an additional new product that feeds the work for good or for bad.”

Still young, the movement of Israeli-Arab artists is growing rapidly, Farid said. In his view, what is needed is a “cultural intifada.”

“Culture can do what politicians can’t,” he said.

Michal Lando is a freelance journalist working out of Tel Aviv.

Correspondence opened on August 1 and will run for six months at the L.A. Mayer Museum for Islamic Art, located at 2 Hapalmach St. in Jerusalem.