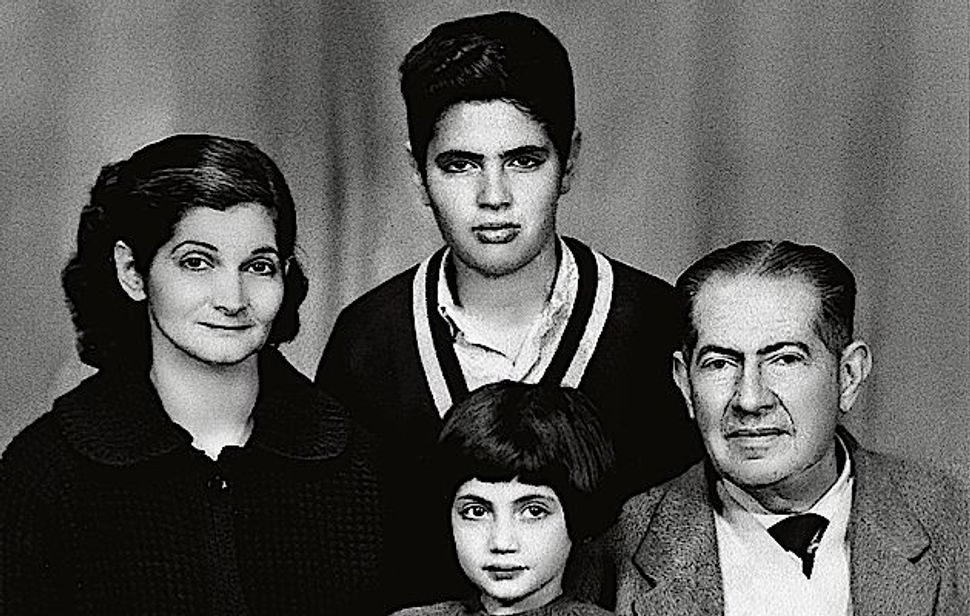 In Egypt: On the eve of leaving Egypt, Leon and Edith had a family portrait taken with Issac and six-year-old Loulou. Image by Courtesy Cesar Lagnado Family Archives

The Arrogant Years: One Girl’s Search for Her Lost Youth, From Cairo to Brooklyn
By Lucette Lagnado
Ecco/HarperCollins, 416 pages, $25.99

No happy ending immediately follows an exodus from Egypt. Readers of the Tanach and of the prizewinning debut memoir by Egyptian-born journalist Lucette Lagnado, “The Man in the White Sharkskin Suit” (Ecco/HarperCollins), know this. Lagnado’s 2007 book, winner of a Sami Rohr Prize, treats the decline of a proud Jewish boulevardier — her father, Leon — after Gamal Abdel Nasser forced him out of Cairo. Gone are his wealth, his days of worship in the ancient city’s synagogues, and his nights of hobnobbing with Egypt’s elite in nightclubs and casinos. With his family, he ultimately flees to America, where he struggles for the rest of his life in poverty. It is a tragic tale, and not one that changes with the light. So why retell it in this follow-up memoir, “The Arrogant Years,” which recaps the same story, but from the perspective of Leon’s wife, Edith?

The answer may be that Lagnado, 54, is not yet done with her family legacy. Moreover, given Egypt’s recent revolution, her subject is timely. True, her second memoir about her parents covers much of the same ground as her first, with Leon remaining the more vivid figure. Still, both of these painfully moving titles are worthwhile, especially as bookend portraits of two powerful personalities. Equally influential as parents — if occupying perpetually opposed camps — Leon and Edith spurred their youngest child to success in America, even as they remained unable to help themselves.

The couple were at cross-purposes from their marriage’s start: The wealthy Leon — some 20 years older and a paternalistic philanderer — demanded that his bibliophilic bride quit her job as a teacher. She obeyed. By 1962, the already unhappy pair were plucked by an anti-Semitic despot from their roots in the ancient past (Cairo’s millennia-old Jewish community) and made stateless. Unable to accommodate the exigencies of the present, Leon and Edith left Egypt together. But, like frightened soldiers, they stared into the abyss of their respective refugee experiences alone.

They united, however, in their concern for Loulou — their pet name for the author, their youngest child, who, once sickly, is now a reporter for The Wall Street Journal (and also served as an editor for this newspaper) — and in their desire to see her thrive. But they had different measures for success, and used different means to achieve their goals. Leon, a chauvinist to the end, told a preteen Loulou searching for vocation that, when grown up, she could have a “little job,” in a flower shop. Still, both parents left their indelible marks on the author, and it is one of the primary pleasures of these two poignant books to discover the positive nature of her lasting bond with each of them.

Leon, as recalled in “The Man in the White Sharkskin Suit,” represented the author’s happy early years. After shattering his leg in a crippling fall, he stayed home to care for the infant Loulou as he nursed his injury. But as this new memoir shows, it was Edith who used her own thwarted ambition to drive her daughter to intellectual triumph. Pushing her child to distinguish herself in America was a way to redeem her own glorified past in Egypt. “Loulou, you must rebuild the hearth,” Edith tells her repeatedly. It is her rallying cry.

Like any shrink-wrapped Utopia, the Cairo enshrined in family memory is a personalized one. It is largely limited to their street, Malaka Nazli, where the once prosperous family lived in an airy apartment. It also features the local eatery Groppi’s, where Leon conducted his goods-trading business among the well heeled, and the nearby L’ Ecole Cattaui, where Edith taught prior to her marriage and was once honored with the gift of a key to a pasha’s library.

That particular Cairo represents their wondrous lost world. But as with many elegies, descriptions of it can get treacly. For Leon, Lagnado writes, it “was a palace of pleasure, a sybaritic Red Cross station. No matter how late he arrived at Covent Garden, which featured dinner and dancing amid acres and acres of manicured gardens, the orchestra would be playing continental melodies as hundreds of couples waltzed or did the tango. If he was hungry, he could sit down as late as one or two in the morning and order a full-course dinner because this was Cairo, and the usual rules about when to dance and when to play and when to dine simply didn’t apply.”

Nonegalitarian as that dreamland was, who can question his sorrow at losing it? Leon’s exile from Egypt and entrance into the Western world — frightening with its women’s rights, children leaving home before marriage and a falling away from faith — shook the foundations of both his and Edith’s identities. Prisoners of their natures, and products of their time, they remained slaves to their history in Cairo, wandering in the desert of their American exile for decades.

Like Moses, they stayed behind as their children, metaphorically, crossed over the Sinai Peninsula into Israel. By penning one more memoir about her parents, perhaps Lagnado hopes to bring them, too, into the Promised Land.

Susan Comninos is a regular contributor to the Forward whose work also appears in Christian Science Monitor, Times Union and TriQuarterly Online.