Learning From the Fingers and Mind of a Guitar Master 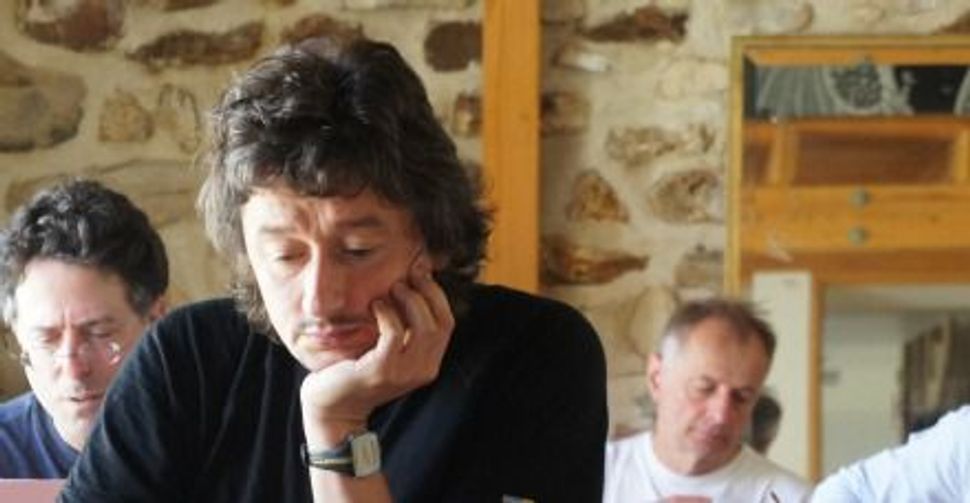 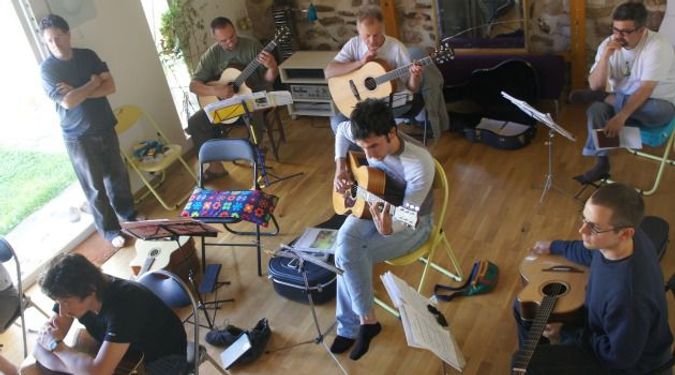 Lucky Nine: Guitarists from around the world traveled to Pierre Bensusan?s home outside Paris to learn and listen for a week. Image by Theo Bensusan

“Listen!” one of the students says, looking astonished. He motions with his head toward the dining room, where Pierre Bensusan is clearing the table. I listen. Pierre is not only humming and whistling at the same time, but he seems to be whistling a melody and humming an accompanying bass part.

“Sure,” he says, shrugging, when one of us asks him if this is in fact what he’s doing. “Why not?”

It’s the first night of our six-day guitar seminar with Pierre at the home he shares with his wife, Doatea, and their 18-year-old son, Theo, in Château-Thierry, an hour east of Paris. They’ve put the nine of us up in their house and guest house. We are all men, ranging in age from 20s to 60s, from across the world. There’s an Italian, a Brit, a German, a young guy from Ireland and three Swiss (one Swiss German, one Swiss Italian and a Czech émigré). There are two Americans, of which I’m one.

We’ve all arrived in Château-Thierry with our guitars, hoping to learn something from the master.

To be truthful, I’ve signed up for the seminar with a great deal of trepidation. I’m here on my own recommendation — there was no audition — and, although I’ve been playing guitar since I was 9, it has been only in the past three or four years that I’ve really been playing seriously, immersing myself in classical and jazz pieces.

Pierre, on the other hand, is a musician’s musician. One of the most inventive guitarists working today, performing in a space between jazz and world beat, he has, along with Michael Hedges and Leo Kottke, transformed what it means to play acoustic guitar. Born into a Sephardic family in Algeria, raised in Paris from the age of 4, he seems now, at 54, a large spirit with volumes of rich and open music tumbling out of him.

His first album came out in 1975, when he was only 17, and he’s released nine albums since. At some point in his career, he made the decision to play everything in a modal tuning called DADGAD. It’s the equivalent, I suppose, of learning to play a guitar upside down. It’s not impossible, it’s not really difficult, but it does require starting over from zero. The results were astonishing.

Years ago, I read a review of a Los Angeles concert by Bobby McFerrin and Chick Corea. The reviewer wrote that McFerrin, who seemed an unworldly spirit channeling pure music, made Corea, in comparison, look simply like a brilliant musician.

Pierre is like that: When he plays, the music seems to unfold in its most platonic of forms. In fact, more than once over the course of the seminar, he brings tears to my eyes simply playing scales and etudes.

I’ve spent the better part of the year preparing, studying with two teachers here in Atlanta, learning the required pieces: Pierre’s own compositions, “Hymn 11” and “L’Alchimiste,” along with 16 arpeggios he devised for DADGAD. At the beginning of the year, the pieces floated on the far shore of my musical abilities. By the time I arrive in France, I can play them competently enough not to embarrass myself completely.

I’ve taken as my motto while I’m here a line from an old Sam Shepard play: “There’s a lot to be said for doing a thing badly.” A character makes this remark after another character starts tap-dancing. The second character assumes he’s being insulted, but the first character explains that, no, he’s simply remarking on how hard it is to dance when we’re all intimidated, sometimes to the point of madness, by the images of a debonair Fred Astaire, for example, gliding across the ceiling. “Even Nijinsky went nuts,” he says.

Still, Pierre sets the bar pretty high. It’s clear from the first moments of the seminar, when he stands before us cradling his guitar, that he makes no distinction between the small technical skills a guitarist must acquire — a nimble right hand, for example — and the larger issues of musicianship.

“I want you to look at music as a caring entity who always wants you to give your best,” he tells us, and he means this, it seems, even when it comes to tuning.

It’s about self-alignment and balance. “You should leave here no longer tolerating sloppy playing. The left hand should never be lost on the fretboard!”

But he tells us that the essence of music is uncertainty. “Life is not secure, and security in music is a lie. We must play with the insecurity. We must make insecurity tolerable, acceptable, even pleasant. I want to hear music that has accidents and uncertainty in it. Music comes from a world that’s not perfect, and so it must stink a little bit.”

As the days proceed, the morning hours, unlike the morning hours of my regular life, are filled, luxuriously, with practicing — arpeggios, scales, exercises, etudes, the two pieces. At 9 a.m., the local baker stops by in his truck with croissants and French bread. Around noon, one of the students cooks lunch for everyone. There’s coffee and good conversation in a hodge-podge of languages: Mario speaks German with Michael and Beniamino, and English with the rest of us; Lorenzo translates into Italian whatever English Beniamino finds too difficult; Beniamino speaks French with Pierre and Lubomir; I understand about 60% of the French and 20% of the German and the rest is English. Both Pierre and Doatea are fluent in it.

At 2:30, we meet with Pierre in a large, open, sunny studio. Our sessions go on for five or six hours. We play for him. He critiques us. We sing. He leads us, in unison, through drills. He lectures us, responding to our questions and our playing from the depths of his experience as a composer and performer.

“You’re not a guitarist,” he tells us at one point. “You’re a musician who plays the guitar. The guitar should never determine what the musician can play.”

He demonstrates this by improvising on the theme of “L’Alchimiste,” playing it in a far more complex and jazzy way than we’ve been asked to. Andrés Segovia famously called the guitar “a little orchestra,” and now I know what he meant. The piece could be played by a quartet or a full orchestra. Pierre just happens to be playing it on a guitar.

Another time, when he’s showing us his recording studio, he begins improvising again — “You see the crazy keys I play in? This is C-sharp!” — before segueing into a long, complicated and absolutely gorgeous banquet of notes.

“Do you recognize what that tune is?” he says to me.

“What you know is a cage,” Pierre tells us in class. “Every time you pick up your guitar, you should be like a scientist entering his laboratory, exploring. Study harmony, bass, ornamentation, chords. Bring everything into it. Take more chances, be more curious. Music should never be a cage. You can keep reimagining it all the time. You can always be experimenting, always growing, always digging, always insisting. And above all, you should never bore your guitar!”

The week ends all too quickly. I’ve booked an early flight out of Paris, and as a consequence, I’m the first to leave on the last day, heading out before everyone else gets up. John, the other American, has agreed to drive me to the train station in Château-Thierry, and while he dashes off to get his car, I stand at the Bensusans’ gate, looking back into their courtyard. The sun is rising, warming everything with its light.

I’d said goodbye to everyone the night before. The society we created over these seven days, the nine of us with Pierre and Doatea acting as our hosts and guides, was focused, intense, cooperative and loving. I’m sorry to leave it, though I’m leaving, I know, with a renewed appreciation for the concept of mastery — Pierre is a shining example of that — and for the big-hearted and high-minded principles that both Pierre and Doatea evince, determined to bring these qualities more consciously into my own work as well as into my own playing.

John pulls up in his rental car. I take one last look at the house and the guest house and the courtyard. I throw my suitcase into the backseat, and I pick up my guitar, resolved never to bore it again.

Joseph Skibell is Associate Professor of English and the Director of the Richard Ellmann Lectures in Modern Literature at Emory University. His novel, “A Curable Romantic,” won the 2011 Sami Rohr Prize in Jewish Literature Choice Award.

Learning From the Fingers and Mind of a Guitar Master