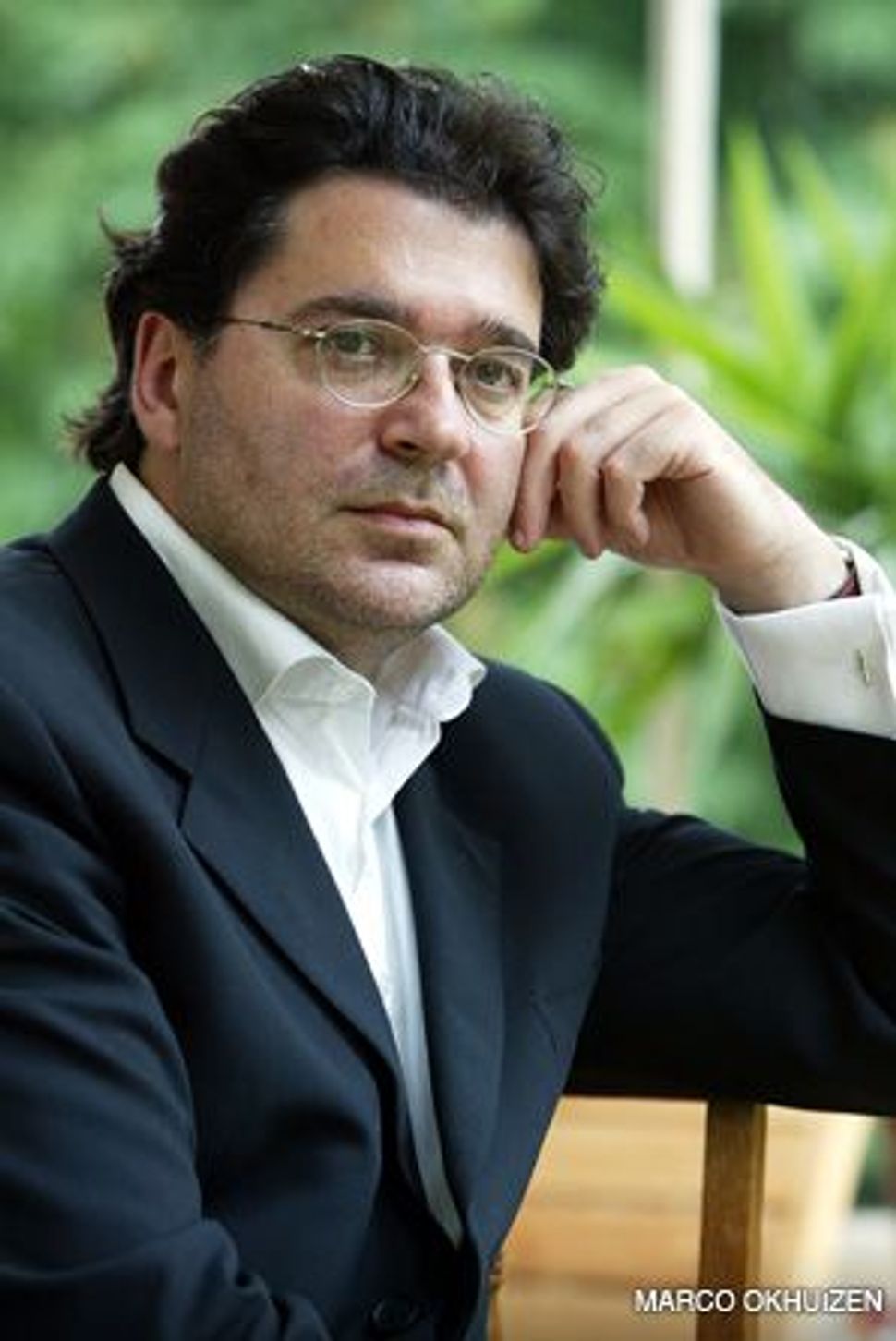 As a young Dutch Jew growing up as part of an Orthodox Jewish family in southern Holland in the 1960s, Leon de Winter turned to Franz Kafka and Isaac Bashevis Singer to understand post-Holocaust Europe. Kafka’s feeling of “seasickness on dry land,” combined with Singer’s “Every human being, even if he is an idiot, is a millionaire in emotions,” shaped the intellectual and novelistic development of the Netherlands’ best-selling author. 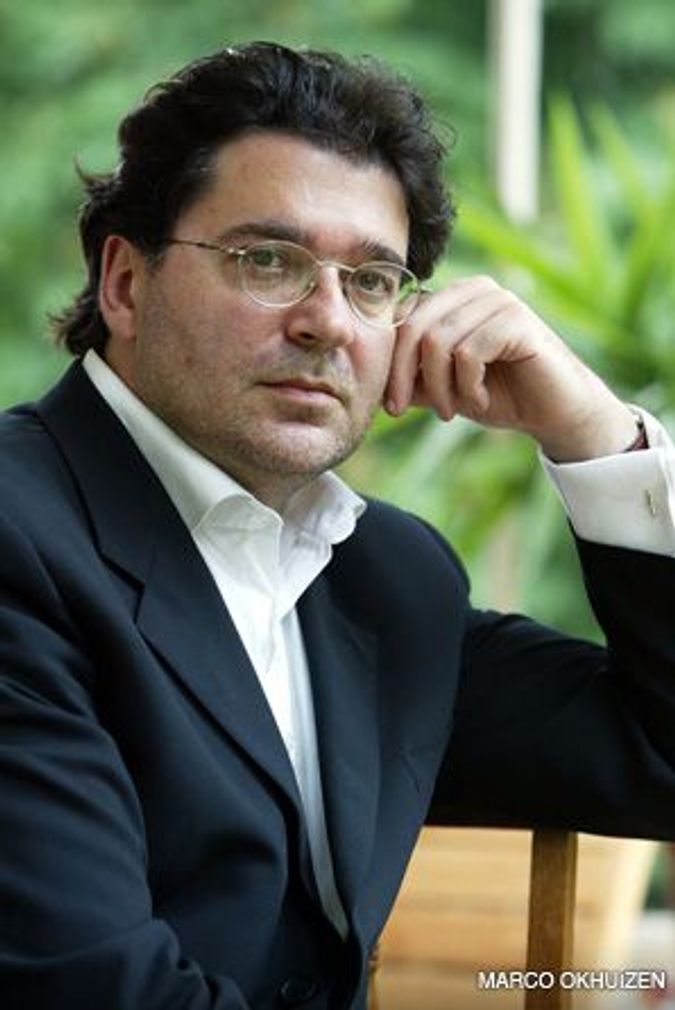 De Winter’s novels are populated with restless, pensive Jewish characters who, as de Winter told me, capture “the existentialism of Kafka and the colorfulness, joy and vitality found in Singer’s works.” De Winter was born in 1954 and grew up in the small town of Den Bosch, which conjures up a kind of pre-World War II Singer-like shtetl but is overshadowed by the horrors of the Shoah period. Both his parents survived the Hitler movement in hiding, and his vivid recollections of his town are filled, he says, with “guilty houses, guilty streets, and guilty beaches.”

His new novel, “The Right of Return” (“Het recht op terugkeer”), a best-seller in the Netherlands, is a psychological thriller about a Dutch Jew whose son is kidnapped in 2004. His frantic search for the boy, which spans a 20-year period of the narrative, crisscrosses the United States, Holland and Israel and implicates global power politics. The book’s subplot is the fragile state of Israeli security; twenty years later, in 2024, the Jewish state is reduced to Tel Aviv, and the children and grandchildren of the Zionist pioneers have returned to the Diaspora. What remains in Tel Aviv is an amalgam of “elderly people, cynics, criminals, the hopeless, and those who enjoy apocalyptic moments,” de Winter remarked. They are scrambling to defend the last vestige of the Israeli state within an unfolding Middle East dystopia. Many of de Winter’s novels, particularly “Leo Kaplan,” capture the kaleidoscopic themes of a Woody Allen screenplay: death, love, Jewish pensiveness and desperation. Literary intelligence demands that de Winter’s books be translated into English.

Hannes Stein, an Austrian Jew and a leading literary critic who writes from New York for the German daily Die Welt, told me that “de Winter is one of the best writers we have in Europe. He is an old-fashioned storyteller who writes well-constructed plots and stories. He is a first-rate plotter, something you don’t learn. Either you have it or you don’t.” De Winter’s novels have been translated into German and are devoured by readers in Germany, as well as in Austria and Switzerland.

The author’s artistic output is marked by a versatility that cuts across intellectual disciplines. Henryk M. Broder, who is a columnist for Germany’s leading magazine, Der Spiegel, and one of Europe’s outstanding Jewish voices, told me that de Winter “can do everything, from quick columns to essays and novels. Everything is well thought out and well researched and completely clear. In reading his texts, I’ve never had to ask myself what he means. He is a man of letters among journalists, and a reporter among authors.”

In a Europe starved for public intellectuals — with the exception of such French giants as Bernard-Henri Lévy, André Glucksmann and Alain Finkielkraut, and Broder in Germany — de Winter fills an important gap. In the Netherlands and Central Europe he is a rare defender of the Jewish democratic state; in Europe he advocates an assertive secular liberalism that does not bend over backward to placate social and political fads. Along with his sliver of European counterparts, de Winter promotes a robust social liberalism that must grapple with the challenge of integrating large Muslim communities and coexisting with an often hostile minority-belief system. He takes the business of human rights and individual freedom very seriously. Cultural norms within the traditionalist Muslim community — including arranged marriages, “honor” killings of wayward female relatives, and forced marriages between adolescent girls and grown men — represent for de Winter transgressions of human rights that ought to be resisted.

That sort of thinking often leaves de Winter and his fellow maverick thinkers in an isolated place. Most of the Dutch and European left takes a tolerant view of minority cultural norms and views de Winter and his allies as defectors to the right. And yet, those on the right usually continue to view them as members of the secular left. Theirs is a new political territory, and a lonely one.

When the Netherlands refused to provide Ayaan Hirsi Ali, the Dutch-Somalian politician and critic of political Islam, with bodyguard protection for her stay in the United States, de Winter wrote, “No matter what personal security costs, it is little in comparison with what is in danger: our values and norms.” Islamists had issued a steady stream of death threats against Hirsi Ali, but the Dutch government argued that it is not required to pay for security measures outside its borders. De Winter looks at the prevailing attitudes as a contemptible mass cowardice.

A fluent speaker of German, de Winter writes frequently for Der Spiegel. He also contributes to the Dutch political weekly Elsevier and to the opinion page of The New York Times. He splits his time between Amsterdam and Malibu, Calif. He describes himself as “one of the armchair Zionists” who argue, while sitting and watching the television news, that the “Israeli army should be hitting harder.” In his view, the attitude of European liberals toward radical Islam — particularly the Dutch multicultural experiment, a freewheeling, tolerant approach that makes room for all views, including those that reject tolerance — is a trap, reflecting a pre-September 11 naiveté. With a ready catalog of evidence, he begins with the assassination of Pim Fortuyn, the openly gay Dutch politician who was in line to become the Netherlands’ next prime minister in 2002. Fortuyn was a fierce critic of the conservative, separatist segment of the Dutch-Muslim community. He ran into a flood of criticism in a Netherlands still sensitive to its Nazi past and properly resistant to criticism of minority groups.

Two years later, filmmaker and commentator Theo van Gogh, a savage critic of Islamic conservatism, was murdered on a public street in Amsterdam by a Dutch-Moroccan Muslim named Mohammed Bouyeri. De Winter himself had been a target of van Gogh’s hyper-provocative polemics, which sometimes spilled over into antisemitism. The filmmaker, a great-grandnephew of painter Vincent van Gogh, mocked de Winter for writing about the Holocaust and the trauma of survivors’ children, claiming that the novelist was “marketing his Judaism.” He invoked graphically pornographic images, coupled with Auschwitz terminology, to ridicule de Winter and his wife, Dutch-Jewish author Jessica Durlacher, whose father was the only remaining survivor of Auschwitz on the paternal side of her family.

De Winter told me that van Gogh represented “a new type of Holocaust envy. He was the prime example of someone who suffered from this illness. He could not accept that a Jew could write about the Shoah.” One source of van Gogh’s envy was, according to de Winter, those “Jews who have special relations to evil things” — namely, the experience of the Holocaust, which van Gogh could not access. De Winter says that van Gogh “envied me because I was a child of survivors, and he hated me for that. He was an intelligent, gifted artist looking for a burning theme.”

Toward the end of his life, van Gogh had shifted his attacks: Instead of de Winter, they were on the Prophet Muhammad. “This was a dangerous decision,” de Winter said. “He should have stayed with me.”

Benjamin Weinthal is a Berlin-based journalist who writes for Israeli and German publications.