Art That Is at Once Lush and Spare 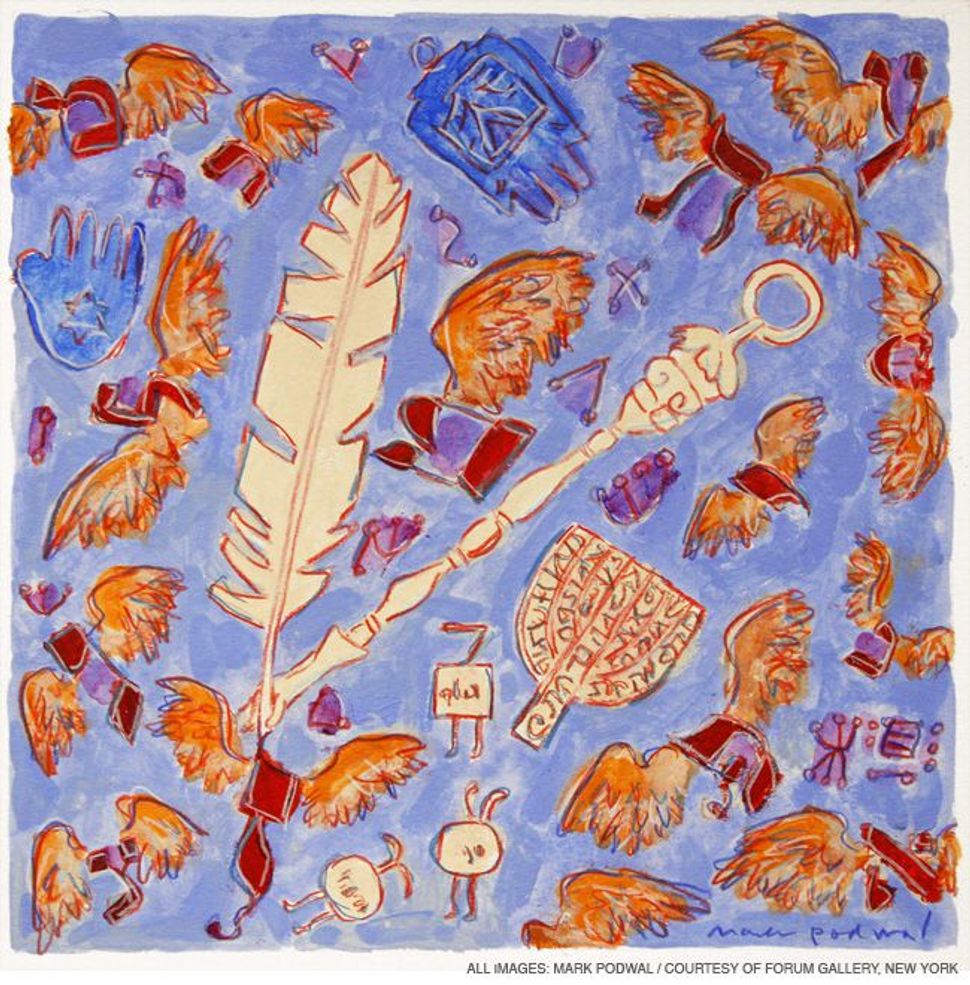 As a graphic artist, Mark Podwal has long been taken with ritual and mysticism, mythology and superstition, angels and magic — particularly as these implicate and influence Jewish tradition via midrash and Kabbalah. Jewish folk beliefs are central to his work. But to Podwal, folk traditions are a vehicle in a larger enterprise: nothing less than the entire Jewish experience. It is the conceit of Podwal’s current exhibition, Jewish Magic, showing until September 27 at Forum Gallery in New York, that magic and mysticism are legitimate representations of larger realities and truths in Jewish life, and as such have much to teach contemporary viewers. It ain’t just magic, Podwal argues.

Podwal’s fascination with the folk world is manifest in the numerous books he illustrated, including the award-winning “The Demons’ Mistake,” a Chelm tale written by Francine Prose; his early Soviet Jewry-themed “The Jews of Silence,” written by Elie Wiesel, and the landmark Haggadah, “Let My People Go.” But Podwal does not deal exclusively with the magical and bizarre; “Freud’s Da Vinci” (to take but one example) is a truly creative — and daring — pictorial representation of the psychoanalyst’s study of the Renaissance scientist-artist. And the artist-as-filmmaker is represented, as well, in the highly regarded “House of Life: The Old Jewish Cemetery in Prague,” a portrait of Prague’s burial ground and the countless legends, including the Golem, associated with the place.

Podwal is a well-known graphic artist, but he has operated somewhere below the radar of serious American-Jewish visual arts. He often has been tagged with the characterization of mere illustrator; indeed, much of his oeuvre has been in this genre, and therefore he has unfortunately been relegated to the sideshow of the visual-arts tent. But museum curators and — more important — Podwal’s peers among artists have long recognized that his art transcends graphic art; indeed, it has lasting merit. Podwal’s aesthetics move easily, going from the cartoonish to the artistic without sacrificing the whimsy and wit that characterize his work. Yes, Podwal is fanciful, indeed witty, but there is more to understand about what motivates this artist’s artistry.

In Podwal’s work, it’s all about line and color. It is the case with most painters that color is used at the expense of line; color draws away power from linearity. The results are the wonderfully lush paintings of the standard repertoire that we relish when we visit museums. Podwal’s work, however, makes no such compromise of line and color; the magic of his imagery derives from his lyrical use of color without sacrificing linearity. It is both spare and lush. Podwal is meticulous in the extreme, but meticulousness does not tug at your elbow while you are enjoying the works in this show.

More to the point of Jewish Magic is that Podwal’s art urges, once again, the hoary question: What is Jewish about Jewish art? There is not, after all, such a thing as Jewish physics. At bottom, Jewish art is the expression, through the visual arts, of the Jewish experience, and Podwal understands how to use the venerable arena of exegesis and midrash as a vehicle for this expression. Podwal is un-hysterically Jewish in his approach to his subject matter. He is an artist most unapologetically Jewish; he has no anxiety about exploring Jewish themes, even those illustrated by obscure folktales, and he accomplishes this task without self-aggrandizement.

In fact, the true stars of Jewish Magic are the least flashy of the works shown. In “The Frog Who Taught Rabbi Hanina the Whole Torah,” the eponymous frog is smoothly transmuted into a yad — the ritual pointer used in reading the Torah — pointing diagonally heavenward. A complicated legend is thereby deftly and sparely recounted in a few graphic lines. And tucked away in a corner of the gallery is the unpretentious “Kabbalah,” which also in a few lines represents the mystical 10 traits or spiritual forces of God as a series of interconnected circles. “Kabbalah” gives Jewish mysticism new meaning and, indeed, depth. Podwal teaches us that Kabbalah is not simply the superficial faddishness of Madonna; 10 centuries of profound Jewish mystical experience are crystallized in this little gem.

Jewish Magic is a small exhibit, 30 works artfully displayed in two rooms. But in an exceptionally concentrated way, it illuminates a world of Jewish mysticism and, by extension, a world of Jewish experience. The varied imagery in Jewish Magic is well served by the curatorial eye and superb installation at Forum Gallery. The 30 works in the show, all acrylics and ink drawings, range from blazing colors to simple representations. The works are among the best of Podwal’s output to date. Each work tells a tale, and each tale is introduced to the viewer by a brief and intelligent description provided by the artist.

And the tales are timeless. It is as if the artist is telling us, “Pay attention to these stories; they tell us much that we need to know about our Jewishness, about our Jewish experience.” “One should not believe in superstitions, but it is best to be heedful of them” — as teaches the 13th-century text of rabbinic mysticism, Sefer Hasidim. Podwal soberly and whimsically heeds and understands Jewish magic, and he magically represents Jewish ritual and midrash for a contemporary audience.

Jerome A. Chanes, a Forward contributing editor, is the author of the award-winning book “A Dark Side of History: Antisemitism Through the Ages” and has written widely about Jewish matters. He is faculty scholar at Brandeis University’s Cohen Center for Modern Jewish Studies.

Art That Is at Once Lush and Spare