Answers in the Seekers’ Language 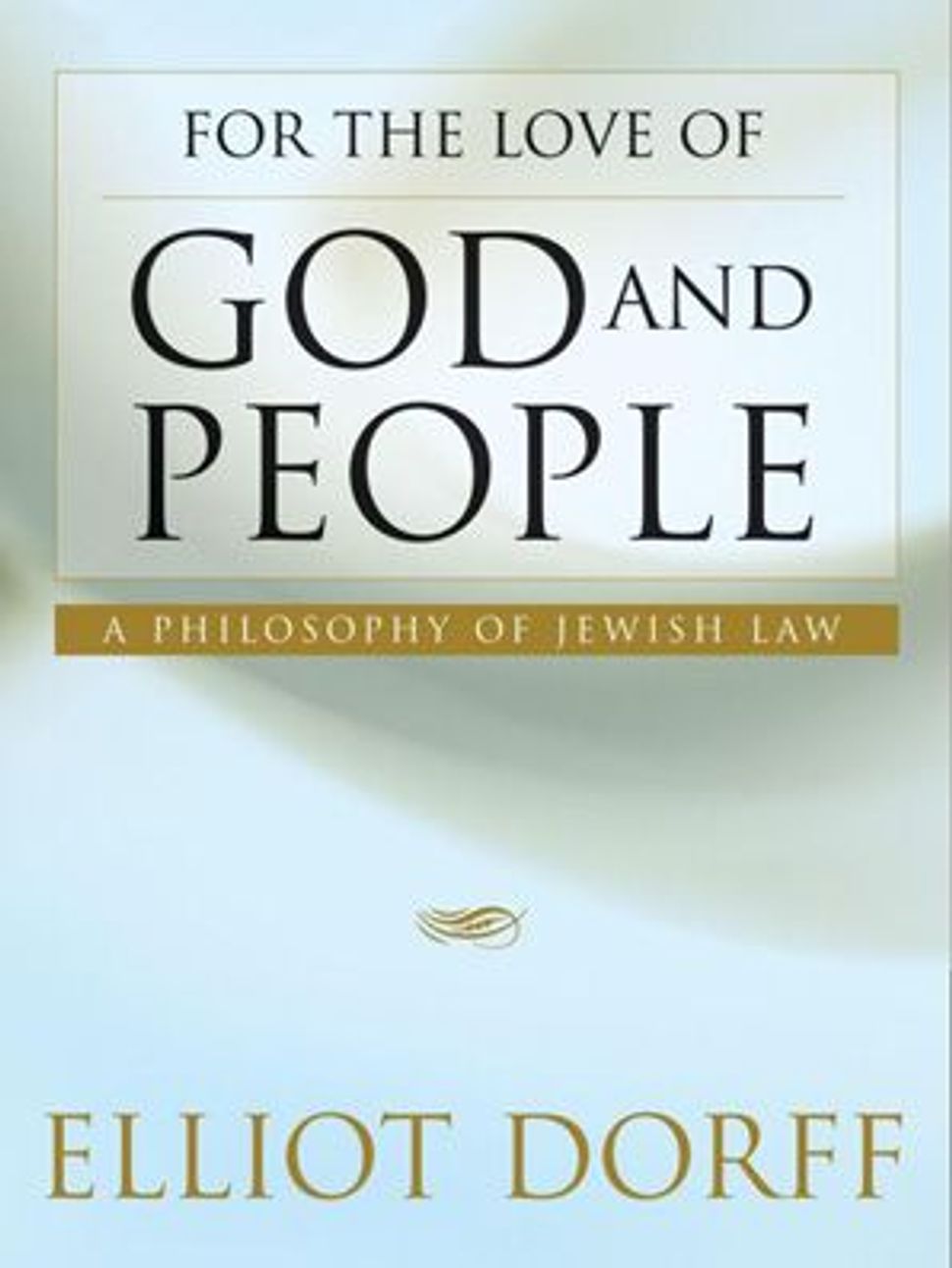 For the Love of God and People: A Philosophy of Jewish Law 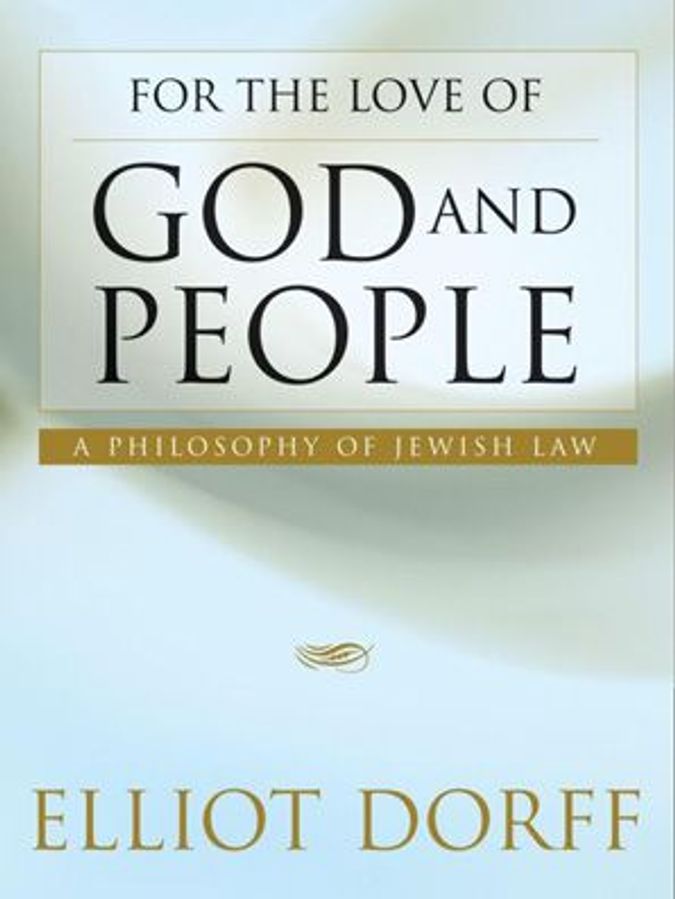 Why care about Jewish observance?

Growing up some years back in the world of Conservative Judaism, I rarely heard an answer to the question. The few explanations that were provided usually presupposed a belief in God, or in the value of the revelation at Sinai. More commonly, the question was dismissed. It fell through the cracks, really, somewhere in between the implicit fideism and obedience of those who kept the laws and the total apathy of those who didn’t.

Too bad “For the Love of God and People” hadn’t yet been published. The latest in a veritable library of books by Rabbi Elliot Dorff of the American Jewish University in Los Angeles, “For the Love of God and People” is one of the rare Jewish books that posits nothing and tries to explain everything from scratch. Indeed, before laying out its philosophy of Jewish law, it starts with a meta-chapter about why someone would want such a philosophy in the first place. At last, nothing is taken for granted: not belief, not identity and not even interest.

It seems odd that one is so hard-pressed to identify other books that do the same thing. On many Jewish shelves, the venerable publications “The Jewish Book of Why” and “Nine Questions People Ask About Judaism” ostensibly fill the role of explaining the faith to interested not-yet-believers. But these volumes, and others like them, still make unsupported claims about revelation, or God, or the people of Israel. They promise answers, but too often have recourse to faith.

Not this book. Dorff fully cops to the documentary hypothesis (the theory that the Torah is the product of multiple human authors), the necessary evolution of Jewish law over time and the possibility that many of our ideas about God are fantasies. And yet, he maintains his view that the Torah “is both divine and significant” and that Jewish law is an “expression of our love for both God and people.”

How does Dorff square the circle?

For a start, he dispenses with reward and punishment. Like most significant theorists of Jewish law, ancient and modern, he finds this the crudest and least authentic of reasons for obedience. Nor does Dorff resort to a notion of divine command. In fact, he has an entirely naturalistic concept of revelation, namely that “what marks an event as a revelation of God is not that the event itself is of a special character but that it is interpreted as such by a human community.” This is Reconstructionism 101, and bears out the theory that while Reconstructionist founder Mordecai Kaplan once left Conservative Judaism, he has by now taken it over. “Jewish law… is of human authorship,” Dorff writes, but “the Jewish community accepts [it] as revealing God or God’s will for us.” Later, he adds that “any event could be a source of revelation.” The difference is in the respect accorded it by us.

Of course, all this is rather different from traditional notions of the law as covenant (Dorff argues that the Bible used multiple analogies to describe the Torah, drawn from suzerainty treaties, marriage contracts and parent-child relationships) and as Divine. Dorff has recourse to those traditional sources that bear out his theory: the notion that only the silent aleph was heard at revelation, for example. But it is clear that, whatever foundations Dorff lays down, they will not be in heaven. Whatever they are, the reasons for observing Jewish law will be found within us.

Dorff’s view is that Jewish law is a kind of organism, both body (the law itself) and soul (the religious convictions underneath it). Moreover — and belying the claim that Conservative Judaism has lost its emotional center — it exists as an expression of love. Unlike his colleague Rabbi Joel Roth (whose work he describes at length), Dorff sees Jewish law less as a system than as an evolving effort to express love. It is inconsistent, it changes, but it is held together by its overriding purpose of experiencing and expressing love. Sometimes reasons for laws are given, and sometimes not. Sometimes there is the pretense of systematization, and other times not. Sometimes Jewish law repels outside influence, and other times (as in the case of polygamy) it embraces it.

In a way, then, Dorff’s philosophy of law is an anti-philosophy. The Jewish law it describes resists description and classification. Like an organism, Dorff writes, it is held together by a sense of identity, much in the way a corporation can be described as continuous even though its staff, directors, products and mission change over completely. That identity is the law’s soul, and that soul is the covenant of love between Israel and God, and Israel and one another. This, Dorff stresses, is not primarily a covenant in the sense of treaty or social contract. Its obligations arise out of a sense of responsibility, as in marriage, and promises. And our motivations for adhering to it — Dorff lists 12 of them — are at once selfish and altruistic, again perhaps like bonds of human relationship.

I find the recourse to love appealing. So many books on Jewish law and theology seem like tortured efforts to rationalize what is, at heart, an irrational, devotional enterprise. As I have shown in my own work, religionists simply want it to work out right. Those of us who find love, joy or community in religious life know that this life’s premises are suspect, and so some of us — theologians, philosophers, rabbis — work very hard to square the circle, to somehow maintain the edifice of religious life even though its foundations are so obviously suspect.

In “For the Love of God and People,” this effort is overt. Dorff knocks out the traditional foundations for Jewish law and replaces them with only a kind of volition. We want it to work out, Dorff seems to be saying, and that’s what we really mean when we talk about God, Torah and Israel.

How this theory plays out in practice is the subject of the latter part of the book, which develops a rather conventional Conservative approach to “continuity and change” and a familiar left-center Conservative philosophy of Halacha. These later chapters are interesting but not novel; they are what one would expect. And some of Dorff’s theories are less convincing. The first chapter, for example, has a rather unfortunate comparison of American and Jewish law. Dorff is not a lawyer by training, and it shows.

But what does seem to be new here, amid all Dorff’s lists and arguments, is the view that ultimately, the reason to lead a life according to Jewish law is to experience the love that it enables to be expressed. It’s a remarkably Hasidic notion, in a sense, but one that resonates, I think, with even the most casual of American-Jewish observances. There’s something inchoate there; the spiritual types feel it intensely, the masses rather blandly, but those who affiliate at all find the heart awakened, however gently, in the forms of Jewish life. We may be too ashamed to admit it, but we’re doing this for love, and the experience of love is what we label as God.

Would this explanation have satisfied me all those years ago at Camp Ramah? I don’t know. Back then, I was more of a rationalist than I am now. I wanted explanations, not appeals to emotions that I didn’t trust anyway. Then again, one of the great successes of Jewish summer camp is how it provides an immersion experience: The love is felt, obviating the need for explanation. Who knows? Maybe I could have been told, “You know that feeling you get, when the davening is beautiful and the weather is fair; when your friends put their arms around you and sing ‘Lecha Dodi’? That is the reason we do this — because what you feel inside is love, and God is the name we give it.”

I’m not sure I could have heard those words then — but I’m ready for them now.

Jay Michaelson is a columnist for the Forward and the author, most recently, of “Another Word for Sky: Poems” (Lethe Press, 2007).

Answers in the Seekers’ Language