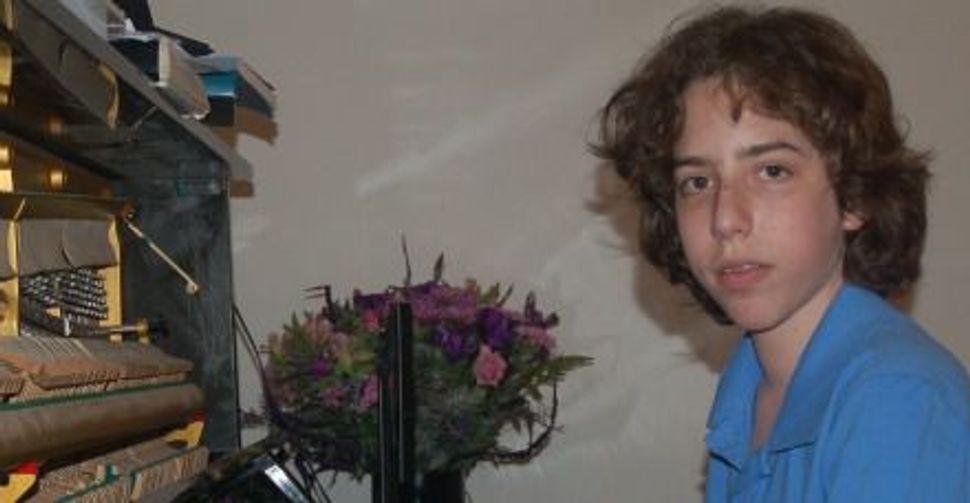 Image by Courtesy of Gadi Lehavi 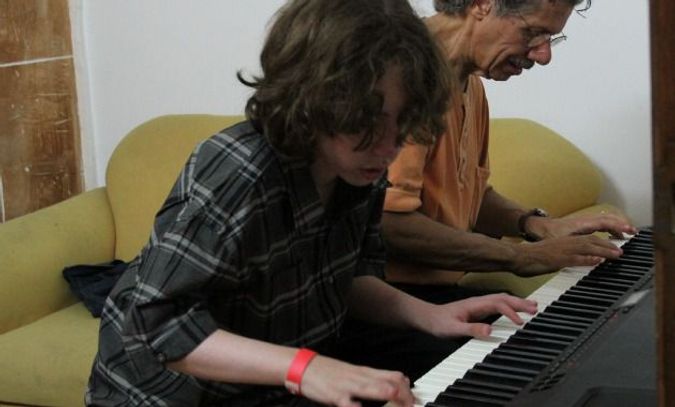 ?From Another Planet? Gadi Lehavi is torn between staying home and exploring the world of jazz. Image by Yoko Higuchi/Jazz Japan

At the improbably tender age of 15, Tel Aviv pianist Gadi Lehavi can play jazz with the kind of subtlety that would be remarkable at any age. Home-schooled since the eighth grade, he now feels the pull of New York, where his artistic peers are most plentiful and his musical development would probably be most rapid.

But for the moment, he is playing it by ear. While he is certain to raise his profile with a New York visit that will include a coveted six-night engagement at the Village Vanguard with Grammy-nominated saxophonist Ravi Coltrane (son of jazz legend John Coltrane), he is leaving his options open in Israel, whose jazz scene is rich in opportunity for study and performance.

“I’m young, and I love my parents, and they won’t be so happy if I leave,” he told the Forward. “But I really wish I could.”

Since at least the 1990s, Israelis have been making their mark in jazz. As Israeli schools have expanded their jazz studies programs and become increasingly connected with the global jazz scene, the trickle of first-rate players coming out of Israel — trumpeter Avishai Cohen, bassist Omer Avital and pianist Omer Klein, to name a few — has become a steady stream. But even among those players, Lehavi’s extraordinary precocity sets him apart.

“He’s from another planet,” said saxophonist David Liebman, recipient of the 2011 National Endowment for the Arts Jazz Master award.

“These days we are inundated with whiz kids,” said Liebman. As founder and artistic director of the International Association of Schools of Jazz and artist in residence at the Manhattan School of Music, Liebman interacts widely with young musicians. “We get amazingly blasé when a new 16- or 18-year-old kid is killing or burning or happening, because we see it a lot. This guy even goes beyond that.”

Lehavi has been turning heads since at least the age of 13, when he joined Liebman for a duo performance of “Autumn Leaves” at the association’s 2010 meeting in The Hague. The performance, which has been viewed more than 22,000 times on YouTube, displays such sensitive touch, fresh ideas and exceptional listening skills that experts have been at a loss to explain it.

“He’s completely off the scale,” said Leon Segal, a Tel Aviv-based psychologist. An important figure in Israeli jazz education since the 1980s, Segal helped secure early support for the Rimon School of Jazz and Contemporary Music in Ramat Hasharon. Rimon, which offers college-level courses, is a founding member of Liebman’s association, a network of schools in some 40 countries.

Although prodigies often begin formal study as early as possible, Lehavi, whose parents said he was experimenting at the keyboard before his first birthday, started to take lessons at the relatively advanced age of nine. Yamli Lehavi, his mother, wrote in an e-mail to the Forward that she and her husband wanted to allow him to “develop his hearing naturally” and not to “interfere with his spirit.”

Today, Gadi Lehavi’s feelings about formal classroom work at a dedicated music school are mixed. After depending on his ear for so long, he said, “really getting into the paper stuff in terms of theory is a good balance.” On the other hand, earning a degree at this point isn’t his main goal. “It’s the actual knowledge that you gain.”

When classes start at Rimon on October 30, Lehavi will have a place among the 600 students if he wants one, said Avikam Kimelman, the school’s general and academic director. Kimelman named 13 other students — saxophonists, pianists, guitarists and bassists — who hold “the promise to become the next thing in jazz.” But most are in their 20s, he said, while Lehavi enrolled at Rimon at 14.

Lehavi has taken advantage of other school opportunities. He said that a five-week summer program at the Berklee College of Music in Boston in 2009 led to his meeting pianist Joanne Brackeen, who introduced him to Coltrane, who in turn invited him to his Brooklyn home. Extended jam sessions there helped forge the bond that resulted in the Village Vanguard engagement, which will start on September 20.

Despite — or, possibly, because of — the outsized interest he attracts, Lehavi acknowledges occasional doubts about his gift should he move out of his comfort zone. “Maybe it’s really shallow,” he said, “like the cream at the top of the cake: It’s so wonderful, but if you try to get a piece of the cake, there’s nothing there. I’m really trying to fill the holes in case I get into something different and I crash.”

Wary of the possible hazards, his parents have not allowed him to become an object of curiosity. While they have agreed to quick tours with a trio playing reimagined standards and a few originals — last year, he went to Finland, Estonia and Lithuania; last month, to Russia — he has until now spent most of his time in Israel.

During the last school year, he played in a band at the Jerusalem Academy of Music and Dance led by saxophonist Eli Degibri, 33, a standout from an earlier generation of Israeli jazz musicians. Degibri has recruited Lehavi for a new quartet, which will open the International Exposure for Jazz and World Music, a four-day showcase for 26 Israeli acts. The group will appear on November 16 at Yellow Submarine in Jerusalem.

Degibri recounted his years as a wunderkind in Israel, attending the venerable Thelma Yellin High School of the Arts before moving to America, where he enrolled at Berklee and the Thelonius Monk Institute. Over the past dozen years, he has made his name working with former Miles Davis bandmates such as pianist Herbie Hancock, bassist Ron Carter and drummer Al Foster. Still, he said, he is not operating on Lehavi’s “amazing, even genius” level.

“I’m imagining Herbie Hancock and I’m imagining Gadi — two giants,” he said. “Obviously, we can’t say that Gadi is a major force in jazz because he’s not yet known. But I think he will be.”

Gadi Lehavi will be performing at the Village Vanguard in New York, September 20–25.

Phillip Lutz writes frequently about music in the New York region for The New York Times.