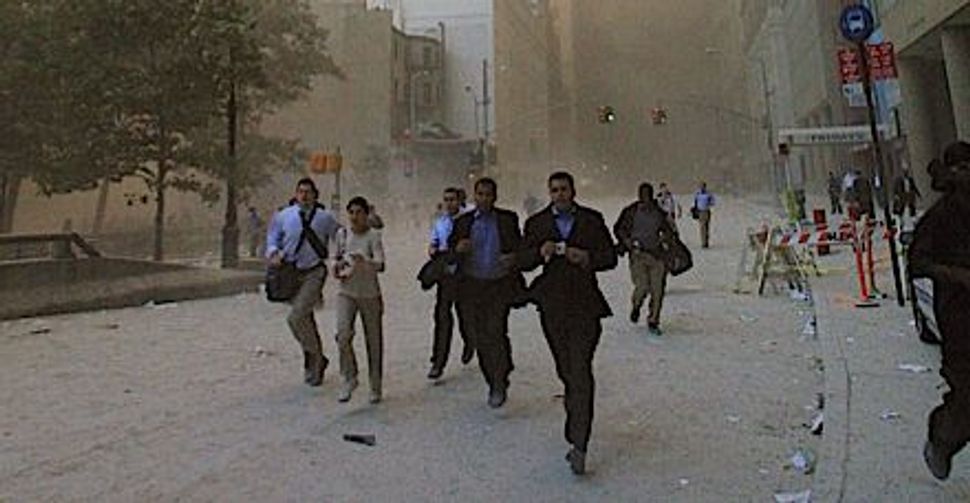 Recent polls indicate that, on this 10th anniversary of the September 11 attacks, 10% of Americans, and almost 20% of people worldwide, cling to some version of the “truther” conspiracy theories — namely, that the attacks on the World Trade Center and the Pentagon were “inside jobs.” Ranging from Iran’s president, Mahmoud Ahmadinejad, to America’s favorite “winner,” Charlie Sheen, many truthers place the blame squarely on Israel, accusing American Jews of collaborating with the Mossad in executing what is historically the most deadly attack on American soil. The vile website of truther Jeff Rense, for example, includes endless anti-Semitic rants.

American Jews staged the 9/11 terrorist attacks for their own financial gain and to induce the American people to endorse wars of aggression and genocide on the nations of the Middle East and the theft of their resources for the benefit of Israel.

A standard element of truther rhetoric is that Israelis and Jews who worked in the twin towers received encrypted cell phone calls from Mossad operatives warning them not to go to work on that fateful day. This, despite the fact that we now know of almost 400 Jews, including five Israelis, who were consumed in the flames of the twin towers. 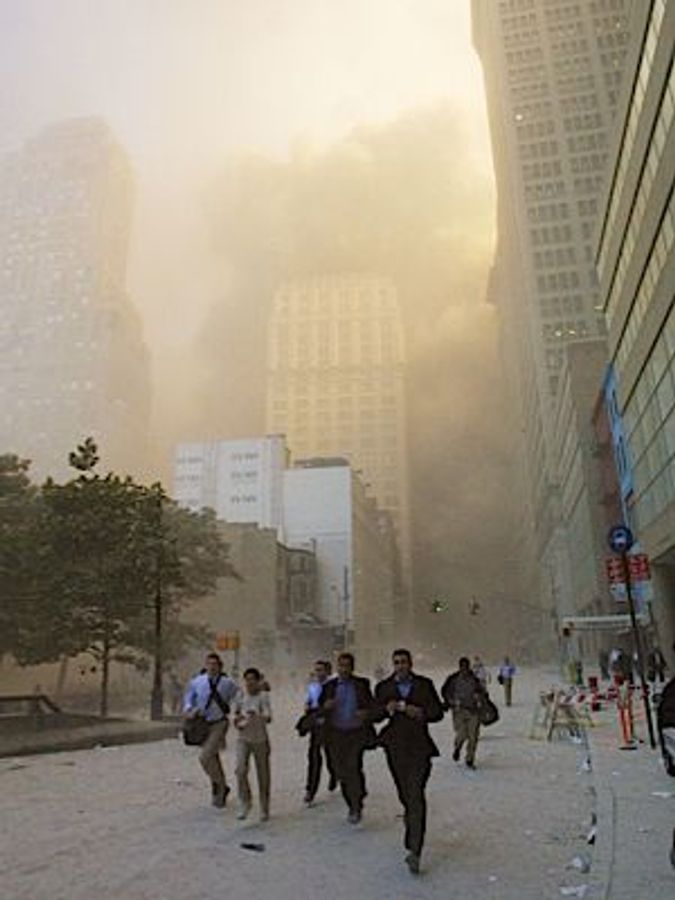 The Beginning of the Aftermath: As men remained lost after the attacks but were not identified as victims, Jewish wives wondered how to avoid the status of agunah. Image by Getty Images

A new book, “Contending With Catastrophe: Jewish Perspectives on September 11th,” issued by the Beth Din of America — a rabbinical court affiliated with the centrist-Orthodox Rabbinical Council of America — records the halachic and philosophical responses of Orthodox rabbis to the devastating consequences of 9/11. The book, commemorating the 10th anniversary of the attacks, includes two classical forms of rabbinic reactions to such fatal tragedies: detailed records of legal decisions issued by rabbis to alleviate the plight of women whose husbands have perished, and homiletic musings about the tragedy and the challenges of theodicy. Initially issued on the first anniversary, the latter comes from a leading Orthodox philosopher and from some of America’s most prestigious Orthodox rabbis.

The book’s first part provides a meticulous record of the ultimately successful forensic and juridical work of the Beth Din to help nine Orthodox women who otherwise would have remained agunot, fettered wives unable to remarry, without authentication of their husband’s deaths by a rabbinical tribunal. A clear explanatory overview of the complex issue, by Rabbi Chaim Jachter, elucidates the classic halachic problems that have been considered by rabbis since talmudic times in determining the marital status of a woman whose husband has disappeared.

Together with Rabbi Michael Broyde’s concise introductory chapter and his learned responsum resolving the cases favorably (tragically by confirming that the husbands have beyond doubt perished), these three chapters are an enlightened model of clarity. Indeed, in tandem with three theological/philosophical chapters in the second part of the book, they would have made for an inspiring and balanced volume.

Unfortunately, Broyde unwisely decided to commission “translations” of a number of far more lengthy, arcane and, frankly, alienating responsa, penned in Hebrew by a number of Haredi rabbis who seem far more interested in parading their erudition in mostly irrelevant medieval rabbinical sources than in quickly and effectively resolving these heartrending and pretty straightforward cases.

The barely decipherable exchanges between Rabbi Mordechai Willig of the Yeshiva University and the Bronx’s Young Israel of Riverdale synagogue on the one hand and the Israeli sage Zalman Nechemia Goldberg on the other, will be utterly baffling to English readers not familiar with the cadences and jargon unique to rabbinic literature. Worse, the translators have rendered these exchanges literally, resulting in dozens of atrocious mistakes in English usage.

But it was while struggling through the tour de force of arcane halachic learning from Israel’s former Sephardi Chief Rabbi Ovadia Yosef — an essay that cites many hundreds of talmudic and medieval sources, precious few of which bear any direct relevance to the cases at hand — that I could identify powerfully with the disgust felt by the maskilim toward rabbinical obscurantism in the early days of the Jewish enlightenment. These feelings were most explosively expressed in Yehudah Leib Gordon’s epic 1875 poem “Kotso Shel Yud.” But, almost a century later, Chaim Grade’s Yiddish novel, “The Agunah,” issued a similar indictment against the tragically inhumane consequences of excessive rabbinical legalism.

Among a litany of abstruse cases, Yosef cites those of men going out to sea in the third century, or falling off a bridge in the seventh or disappearing during a shtetl fire in the 16th in his tortuous efforts to build a massive body of stare decisis for declaring dead those men who were consumed on the high floors of the twin towers. In all but one of the nine cases at hand there was solid forensic evidence, including DNA, that renders Yosef’s medieval casuistry utterly superfluous.

Perhaps feeling constrained by the fact that the cases were, ultimately, no-brainers, thanks in large part to the massive evidence garnered through 21st-century technology, Willig, Goldberg and Yosef revert to an embarrassing and convoluted medievalism. Yosef’s responsum in particular reveals him to be shockingly out of touch with the realities of the 21st century. After citing a host of late 19th- and early 20th-century rabbinic decisions that take account of advances in communication that render certifying death less onerous than in earlier times, Yosef offers an enthusiastic proclamation.

How much more so in our days when there are steam boats, and railroad tracks, and telegraphs, and a post office in every town… there is almost nothing hidden from anybody — real information about anything that happens anywhere in the world in a matter of days… so that in our days where the probability that one would hear of such a thing, due to advanced communication can be added, the concern that perhaps he is living with Bedouins can be considered doubly improbable…. How much more in our days with the immense advancement of communication equipment: telephone, wireless telegraphs, newspapers, radios and television that reach every part of the globe. So too there are many airplanes which fly to every part of the world every day.

Yosef’s wonderment at the amazing invention of Alexander Graham Bell, and his apparent oblivion to the retirements or achievements of Bill Gates and now Steve Jobs, is deeply depressing. Far more discomfiting, given the means employed in the crimes that engendered the cases before him, is Yosef’s marvel at “airplanes that fly to every part of the world.” His deep rabbinical erudition notwithstanding, this responsum, to say nothing of dozens of truly bizarre political statements in recent years, reveals that Yosef has long ceased to be qualified to render contemporary halachic opinions.

Alas, Yosef remains the pre-eminent posek, or halachic decisor, for Sephardic Jews not only in Israel, but also worldwide. Which is to say that while he lives in the era of “steam boats,” he rules over the religious lives of millions of pious Jews who are more affected by the astonishing capacities of the Internet, their mundane thoughts spread in an instant (not “in a matter of several days”) and their every movement tracked by GPS-enabled smartphones, than by anything carried along “railroad tracks” or through the sending of telegraphs.

Willig, Goldberg and Yosef’s casuistic indulgences unwittingly explain the reason that the tragic plight of the agunah was such a cause célèbre for the maskilim who sought to modernize Judaism beginning in the mid-19th century.

The last three essays in this volume are, thankfully, far more uplifting. They include two homilies by the eminent, humane and learned rabbis Norman Lamm and Aharon Lichtenstein on the lessons of the tragedy. Both Lamm’s and Lichtenstein’s musings admirably refrain from engaging in the obvious temptations of religious polemics in addressing the Islamist motivations for the attacks. Lichtenstein insists that, in the wake of 9/11, each faith community must engage in its own introspection.

By far, the most impressive chapter of all is the brilliant philosophical essay by the only contributor who is not a rabbi. David Shatz, professor of philosophy at Yeshiva University, engages in a profound, dialectical consideration of the need to balance legitimate, even admirable religious passion that may lead its adherents to martyrdom, with the need to maintain our reason and morality. Marshalling the profound insights of such luminaries as rabbis Abraham Isaac Kook and Joseph Soloveitchik, Shatz concludes the book with a powerful indictment of those clerics who claim to know the “reasons” for tragedies such as 9/11, from Bible decoders and fraudulent kabbalists to apocalyptic preachers.

Shatz points out that while some derive comfort from false “knowledge” of a divine “why” that explains cataclysmic tragedies, from earthquakes and floods to terrorist attacks, such mystical explanations have the deleterious effect of stymieing any rational religious quest for true understanding of the ways of God, a struggle that, like the Lord himself, must remain infinite.

Shatz thereby wisely postulates that the truly religious, indeed pious, response in the face of such a tragedy is a humble acknowledgment of the limits of even the greatest clerics in deciphering the sudden, cruel fate of so many innocents. I have yet to read a more sagacious response than Shatz’s to the tragic events of a decade ago. His essay alone makes this book well worth owning.

Allan Nadler, a frequent Forward contributor, is professor of religious studies and director of Drew University’s Jewish studies program. He is currently the Arnold Distinguished Visiting Professor of Judaic Studies at the College of Charleston.