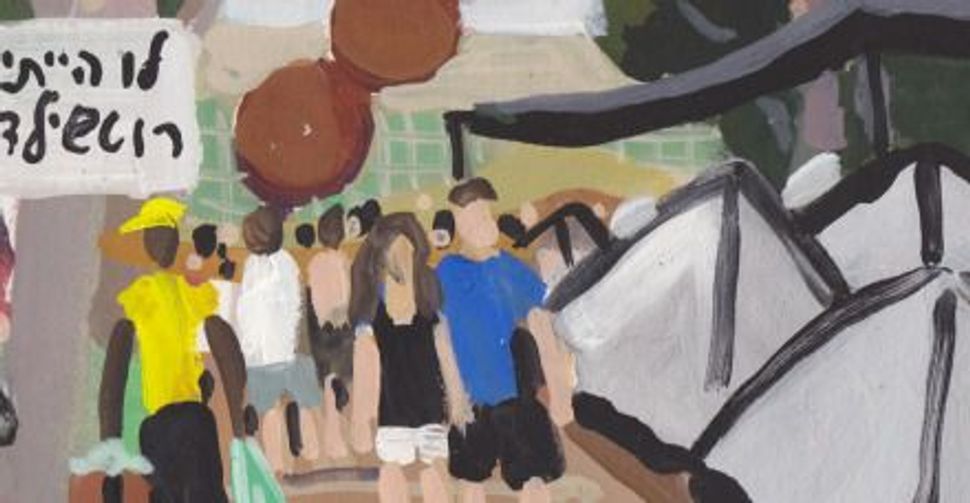 Image by Courtesy of Zoya Cherkassky 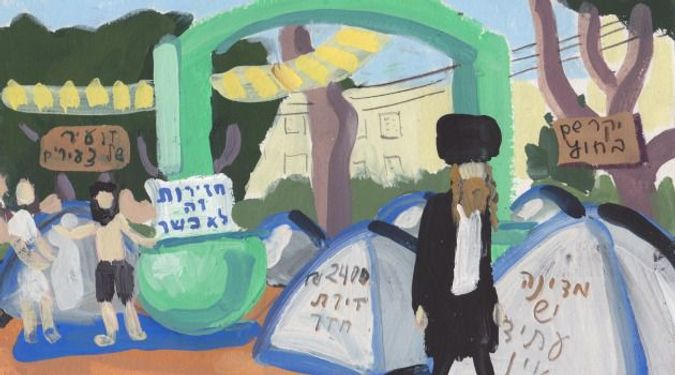 Tent City Art: Visual artists are using the social justice protests as inspiration. Others see an audience for their creativity. Image by Courtesy of Zoya Cherkassky

Zoya Cherkassky has been present at every protest in Israel so far this summer, even the million-person march for social justice, held September 3. She also went out to the tent cities in Tel Aviv and Jaffa to paint what she saw there. And while she was there, she offered to help strangers in drawing the lettering for their handmade placards and banners.

Cherkassky is an accomplished 34-year-old visual artist with works in the collections of the Tel Aviv Museum of Art, the Israel Museum, the Jewish Museum Berlin and The Jewish Museum, in New York. “It’s just my daily practice. I am drawing what I see. I’m getting back to reality,” she said modestly of her work. Her involvement in the protests as an artist, however, is emblematic of how Israel’s contemporary and popular artists are both shaping and being shaped by the J14 Revolution, as it is referred to in Israel. 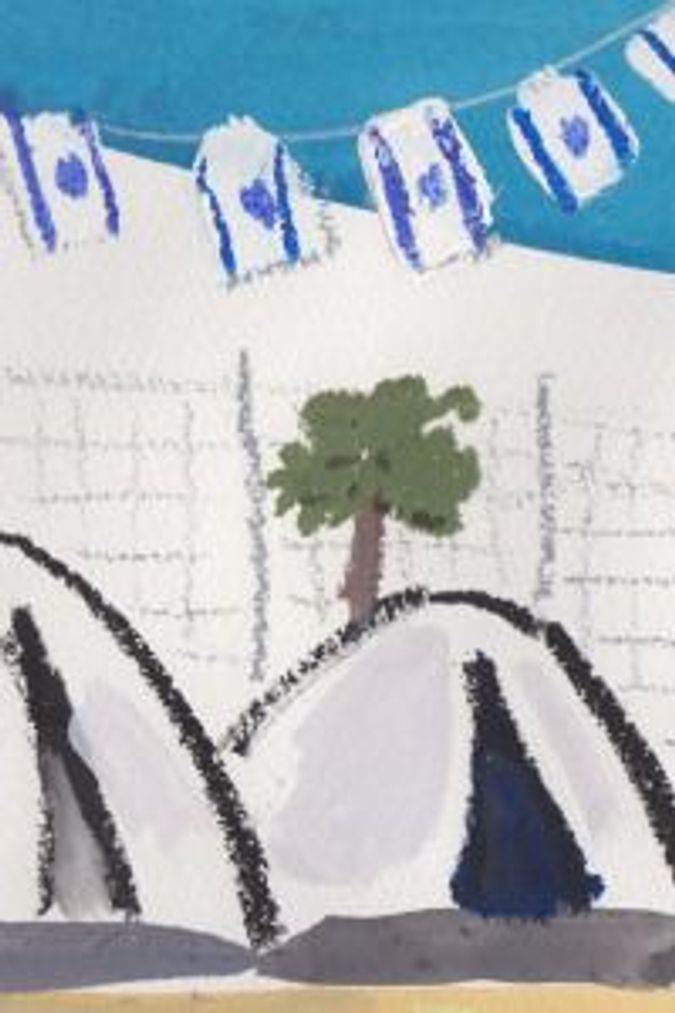 J14 Art: The art of the protests, sometimes called the July 14, or J14, movement, is as broadly based as the demonstrations. Image by Courtesy of Zoya Cherkassky

“In the past, all protests about social issues were marginal, with little effect on politics or culture,” said Nissim Calderon, a professor of Hebrew literature at Ben-Gurion University and an expert on Israeli music. “But this is a huge wave, and it has come with a lot of artistic elements.”

Poet Roni Hirsch is one of the editors of “Shiron Hamahapechah — Shirat Ha’ohalim” (“The Revolution Song Book — Poetry of the Tents”), a collection of poems inspired by, and in support of, the protests. In a telephone interview with the Forward, she agreed with Calderon’s assessment: “There is a heavy emphasis on the aesthetics of this protest. People are paying attention to how they say things. Things are decorative.”

Decoration is the most obvious addition of aesthetics to the protests. One need only look at the way protesters festooned the tent cities and put effort into their signs and slogans to understand what Hirsch means. “In the past, you’d come to a protest and someone would hand you a sign. This time, there was the impetus from the very beginning to make your own, to take creative ownership,” Roy Brand noted in a phone conversation with the Forward. And he should know. As director and chief curator of Yaffo 23, a new gallery space for contemporary art in Jerusalem’s landmark main post office building, he has his finger on the pulse of contemporary Israeli art. Facilitated by the digital media and communications savvy of the younger generations, all these different sentiments in words and images were quickly melded into a potent, shared vernacular, fueling the protests.

Performances and grassroots jamming were also in evidence. “Artists and popular musicians and performers are at the tents every night,” Calderon reported. But it’s not about the celebrities leading the way; rather, it’s democratic and spontaneous, and “anyone can just bring their guitar and play.” “It’s an artistic celebration exploding with freedom of expression and creativity,” Brand said.

Documentary artists provided historical artistic witness. Filmmakers have been constantly out with their video cameras at the tent camps and protests. Facebook pages and Twitter feeds have been clogged with J14 music videos like David Broza’s updated version of “Y’hiyeh Tov” (“Things Will Get Better”) and Aya & the Toys’ “M’shanim et Klalei Hamischak” (“Changing the Rules of the Game”). The auto-tuned remixes of protest-related sound bites by Prime Minister Benjamin Netanyahu and other politicians have turned disc jockey and musician Noy Alooshe into a household name.

This outpouring of creativity is all around. The Graphic Designers Association of Israel put out a call for its members to create professional posters for the protest movement. Within two weeks, 120 posters were submitted and put on the organization’s Facebook page. Fifteen were selected for an August 19 exhibition at a venue on Rothschild Boulevard in Tel Aviv, near the tent city there.

Six thousand copies of the poetry book, edited by Hirsch and others and published by a collaborative of online and print poetry journals and collectives, among them Daka, Maayan, Erev Rav, Etgar and Cultural Guerilla, have been distributed, free of charge or for a donation, at many of the tent cities around the country, as well as by e-mail in PDF form. Most of the poems submitted, by lesser-known poets as well as by such major names as Aharon Shabtai and Ronny Someck, had never before been published.

Though the scale of the output is radical, the content is less startling. “I don’t see much in terms of product that is revolutionary,” Brand asserted. He says it’s too early to look for any end products, be they political or artistic. Calderon agrees, but he is confident that five to 10 years down the road, Israeli art will see the fruits of this unprecedented engagement with collective and social issues rather than individual and personal ones.

“Good art destabilizes you,” Brand said. “What we are seeing now is a destabilization of all of Israeli society. The whole thing is an artlike movement.”

All those interviewed for this article agreed that what the protests have done for the artists far outweighs what artists have done for the protests. “In the past, artists did not join in with the masses,” Calderon explained. Rather than choosing subjects based on personal experiences or on the Israel-Palestine situation, artists are turning to issues of social justice. As Brand remarked, “There’s been a huge growth in the social consciousness of the art community.”

Since 2007, Hirsch has been active with Cultural Guerilla, a group that stages social and political protests in the form of poetry readings. She is thrilled to see their cutting-edge practice somewhat mainstream within the context of the broader protest movement. “What we had hoped that our protests would achieve is happening. We had been waiting for the tide to rise,” she said excitedly.

“But it’s not necessarily about recruiting and mobilization,” Hirsch explained. “It’s about growing circles of participation” — especially for contemporary Israeli artists, who have been used to operating as individuals. Beyond the artists’ involvement in the general protests, Brand views it as significant that they have come together as an activist community to demand their own particular rights.

On August 11, at the Tel Aviv Museum of Art, Brand was at a demonstration of 300 working artists who were demanding that artists be included in the committee to select the new director of the museum (director and chief curator Mordechai Omer died this past June). A group of several demonstrators broke into the closed museum.

“The business of the museum has been driven by the bottom line and political interests. This was our specific brand of outcry against the tycoons,” Brand said, referring to the concentration of Israel’s wealth in the hands of a small number of families.

Calderon doesn’t consider the Tel Aviv Museum protest all that significant. Neither does Cherkassky, who chose not to attend. Instead she helped the tent dwellers in Levinsky Park in the poor area of South Tel Aviv, make their signs. Disagreeing with this artistic parochialism, she expressed disappointment in those artists who did not add their talents to the general protests.

For her, the main concerns are economic. Right now, Cherkassky is paying NIS 2,000 ($550) per month for a tiny one-room art studio, without a bathroom, in a run-down area of town. “If rents go down, then artists, too, will have more opportunities,” she figured.

Cherkassky bought a red flag to wave as she marched with the masses September 3. “Art is art,” she said. “This is more important. It’s life.”

Renee Ghert-Zand is a writer and Jewish educator. She blogs at Truth, Praise and Help.