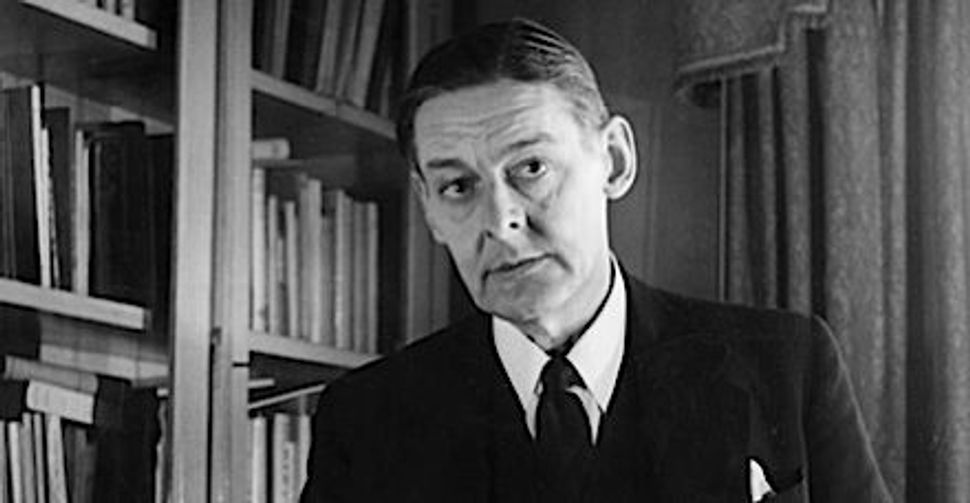 Reading T.S. Eliot in high school, we stumbled over his sneering references to Jews. And with the 1989 publication of “T.S. Eliot and Prejudice” (University of California Press) by Christopher Ricks, and 1995’s “T.S. Eliot, Anti-Semitism and Literary Form” by Anthony Julius (Thames & Hudson), poetry lovers have a clear account of how Eliot, author of “The Waste Land” and “Four Quartets,” expressed his problem with the Jews.

Anti-Semitism is not visible in these major works of Eliot, but it does recur in earlier poems, as Joseph Black observes in a 2010 edition of “The Waste Land and Other Poems” from Broadview Press: “Few published works displayed the consistency of association that one finds in Eliot’s early poetry between what is Jewish and what is squalid and distasteful.” On September 20, Yale University Press published two volumes of Eliot’s “Letters,” shedding further light on the problem. Containing letters from 1898 to 1925, these books, edited by Valerie Eliot, the poet’s second wife, and Hugh Haughton, an English professor at York University, place Eliot’s attitude toward Jews in historical and cultural context. 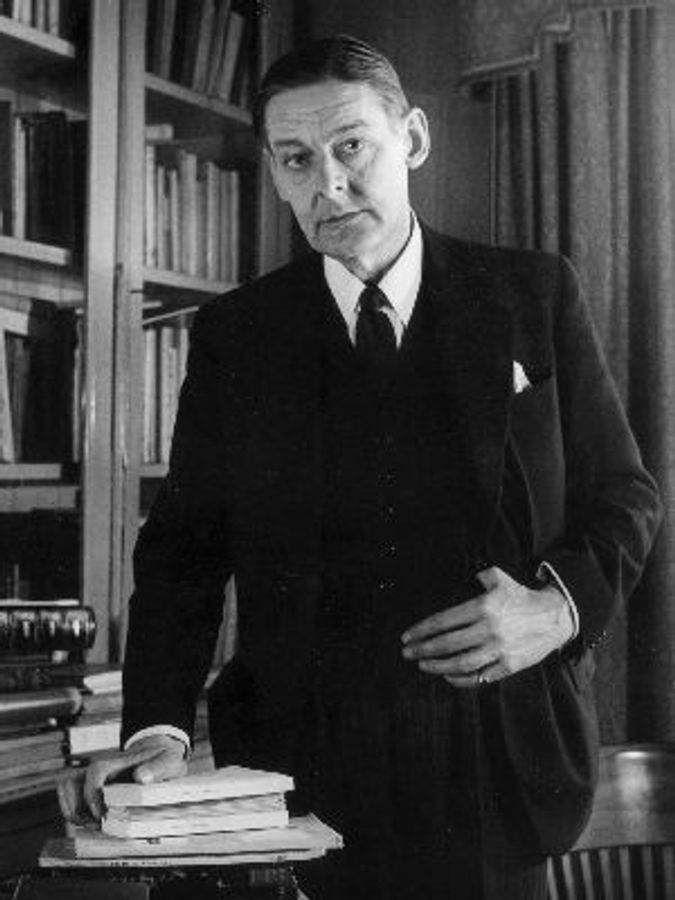 Ricks and Julius cogently explained the details of how some early Eliot poems have unappealing images of Jews. “Gerontion” recasts the stereotype of Jew as slumlord: “My house is a decayed house, / And the jew squats on the window sill, the owner.” “Burbank With a Baedeker: Bleistein With a Cigar” is an evocation of Venice that seems to refer to Shakespeare’s Shylock: “On the Rialto once. / The rats are underneath the piles. / The jew is underneath the lot.” And in “Sweeney Among the Nightingales”: “Rachel née Rabinovitch / Tears at the grapes with murderous paws.” According to Ricks and Julius, underlying these images was Eliot’s admiration for the French fascist and anti-Semitic author Charles Maurras. During a 1933 lecture in Virginia, published in 1934 as “After Strange Gods,” (which he later refused to reprint) Eliot, following Maurras, stressed the importance of social “unity of religious background…. Reasons of race and religion combine to make any large number of free-thinking Jews undesirable,” Eliot declared.

Eliot himself had opted for a bifurcated social identity. St. Louis-born and Harvard-educated, he had relocated to England permanently around the start of World War I, but remained aware of his own status as a transplanted foreigner. Whereas Maurras, in his ultra-conservative periodical, L’Action Française, scoffed at métèques, a pejorative term for Mediterranean immigrants, in his own letters Eliot described himself using the more neutral term “metic,” from the ancient Greek, meaning resident alien. In July 1919, Eliot wrote to a Bloomsbury hostess: “Remember that I am a metic — a foreigner, and that I want to understand you, and all the background and tradition of you.” In a 1925 review for The Nation, excerpted in Volume II of “Letters,” Eliot observes that modern poetry is an urban phenomenon: “Here too the metic plays a large part; for the metic, like the Jew, can only thoroughly naturalize himself in cities.”

Eliot makes clear in his “Letters” that as metic he felt literarily and personally complicit with Jews such as Sydney Schiff (a novelist and translator who published under the pen name Stephen Hudson) and Leonard Woolf (the political theorist and husband of Virginia Woolf). Eliot, like Schiff and Woolf, had a frequently ailing wife, and his plaintive missives open-heartedly demand advice, commiseration and assistance. Schiff and Woolf were constant, faithful friends in troubled times. In August 1920, Eliot’s mother — who comes off rather like a humorless version of Oscar Wilde’s Lady Bracknell — wrote to her son, mentioning poet Maxwell Bodenheim: “It is very bad in me, but I have an instinctive antipathy to Jews, just as I have to certain animals…. There must be something in them which to me is antipathetic.” A week later, Eliot replied to his mother that he and his wife, Vivien, “spent the weekend at Eastbourne, visiting some friends called Schiff — very nice Jews.”

After 1922, when Eliot launched a literary quarterly, The Criterion, he relied on “nice Jews” and “free-thinking Jews.” Doing so, he favored his own literary taste over strictures of political ideology, accepting or actively seeking out contributions from journalist Joseph Kessel, novelist Ada Leverson, art historian Paul Jacobsthal, critic Julien Benda, translators Jean de Menasce and Samuel Solomonovich Koteliansky, and from poets Humbert Wolfe, John Rodker and Max Jacob. In a 2009 article, British poet Elaine Feinstein notes that some of these would have known about Eliot’s offensive early poems, but “none of them seems to have challenged Eliot. Anglo-Jewry has habitually treated such comments as minor irritations in the general context of historical experience.” By contrast, Eliot shunned conservative or fascist authors such as Maurice Barrès, Paul Morand and Gabriele D’Annunzio, whose racist beliefs he might have been thought to share. In 1923, he deleted from another author’s essay a long quote by Barrès, stating, “I think we have had nearly enough of Barrès in one generation.” In 1924, Eliot wrote to one correspondent that Morand was “stale… I think that he has nothing fresh to give.”

Discriminating about everything, Eliot’s complex dealings with Jews is epitomized by a 1914 visit to London by his friend, the brilliant mathematician Norbert Wiener, who had earned a doctorate from Harvard at age 18. Eager to see Wiener and resume their intellectual dialogue, Eliot reported to a mutual friend in December 1914, “Wiener, like a great wonderful fat toad bloated with wisdom, has returned to Cambridge.” Despite Eliot’s unattractive cartoonish imagery, akin to his troubling early poems, other letters to and about Wiener published in the Yale Edition also express admiration and even some affection. Eliot was drawn to exuberantly caricatural Jews, describing in a June 1924 letter his fascination with Fanny Brice and Al Jolson as depicted in Gilbert Seldes’s “The 7 Lively Arts.” Some of the Jews in Eliot’s early poems (“But this or such was Bleistein’s way: / A saggy bending of the knees. And elbows, with the palms turned out, / Chicago Semite Viennese.”) are akin to descriptions of music hall performances, another genre that Eliot adored.

From individual performers and literary Jews to the Jewish people as a historical entity, Eliot’s approach depended much upon his correspondent. In a February 1925 letter to British poet and critic Herbert Read, Eliot admitted to sharing a “racial prejudice” with Read: “I am always inclined to suspect the racial envy and jealousy which makes that people [Jews] inclined to bolshevism in some form (not always political).” Ever conservative, except in terms of literary modernism, Eliot accepted the anti-Semitic stereotype of Jewish Bolshevism. In a March 1923 letter to New York corporate lawyer John Quinn about an advance payment due to Eliot from American Jewish publisher Horace Liveright, Eliot complains, “I am sick of doing business with Jew publishers who will not carry out their part of the contract unless they are forced to.”

Quinn was a ferocious anti-Semite who the previous month had informed Eliot that Broadway was “infested” with “swarms of horrible looking Jews, low, squat, animal-like.” Quinn’s solution, in addition to obtaining the money from Liveright, was to get Jewish banker and philanthropist Otto Kahn to subsidize Eliot, who wrote to Quinn in April 1923, expressing his “very deep gratitude” to Kahn: “To have one of the greatest international bankers interested in me is a reassurance in itself.” Jews frequently offered reassurance to Eliot, even if the contrary was rarely the case.