The Trail of the Elusive Etrog 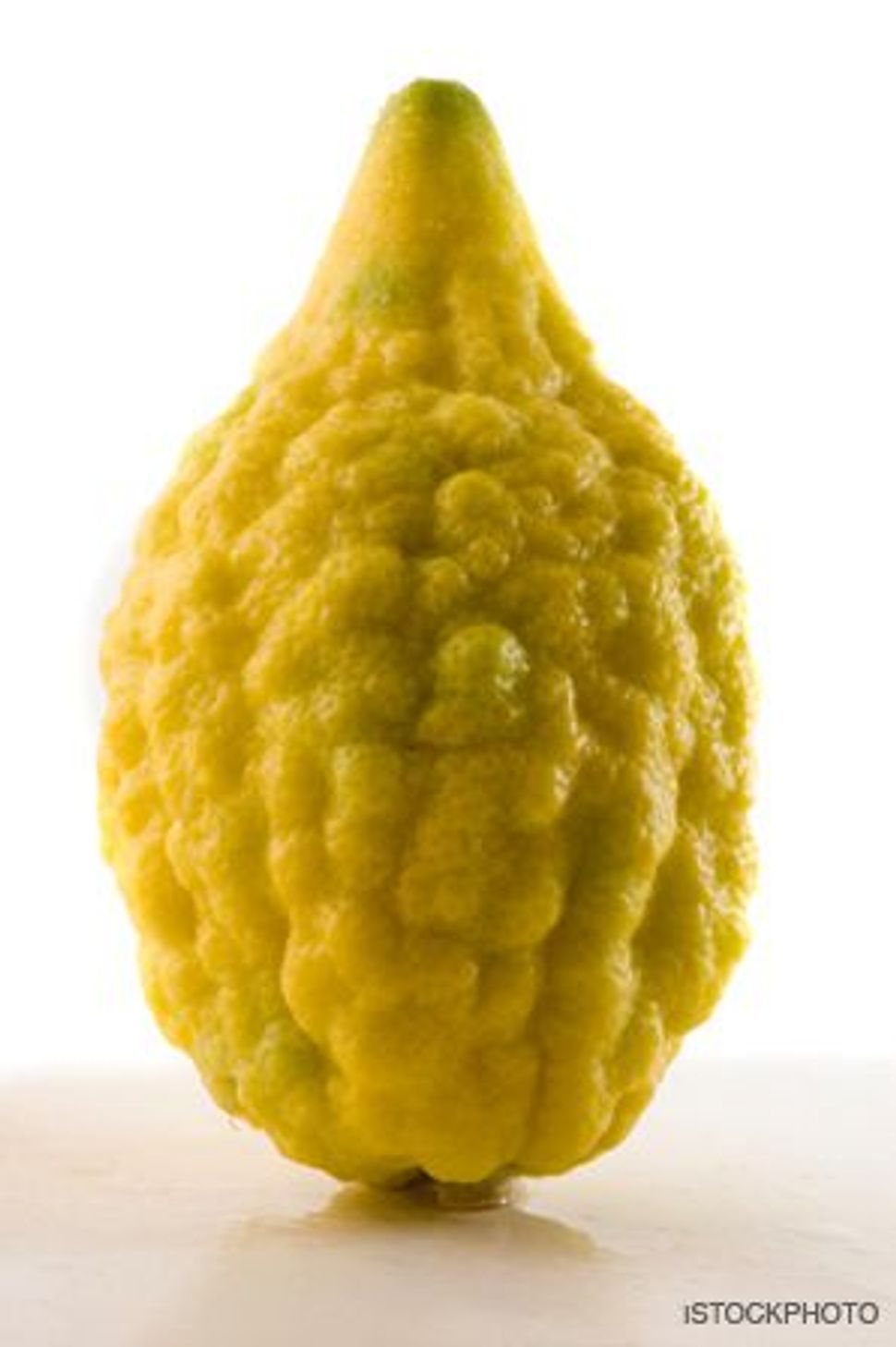 Consider the etrog, the oblong, yellow citrus fruit that plays a central role in the rituals of the weeklong Sukkot festival. Traditionally sold in a protective web of silky flax, it commands a king’s ransom, prompting all manner of jokes about whether this year’s citron would prove to be, metaphorically, a lemon. At the end of the holiday, many households simply discard the fruit. Some, however, transform it into the equivalent of a spice box by sticking cloves into its pebbled skin. The more adventurous make etrog jam or liqueur, or try their hand at candying its inner rind. 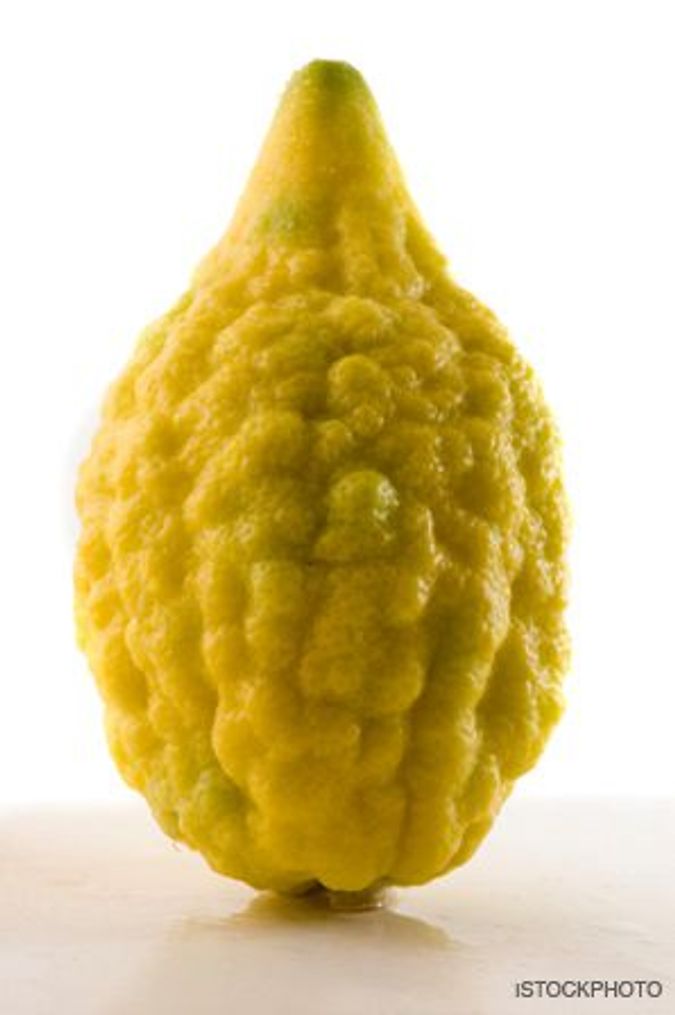 What American Jews don’t do, as a rule, is to contemplate the etrog’s history. What a missed opportunity, for the story of the etrog is lively and complex — from its cultivation and distribution to its ritual importance in modern Jewish life. It is a story that stretches from the Greek island of Corfu to the Caribbean and Southern California. It encompasses the cultivation of agriculture in the Holy Land and the cultivation of ritual in the New World, along with rabbinic disputes, consumer boycotts and even a blood libel, not to mention the vagaries of nature.

By the 18th century, high-quality citrons were grown on the Mediterranean island of Corsica, and from Genoa they were shipped to European markets, where they were sought after by bakers, confectioners, candy makers and, for one week each year, traditional Jews. Gradually, however, prized citrons from the Ottoman Empire, the West Indies and eventually Southern California cut into the Corsican trade. The chaos of the Napoleonic wars had something to do with this, driving citron consumers to search closer to home. Equally important was the growing prominence of the American Jewish community, which increasingly turned to the West Indies for its annual supply. Not only was the local product more affordable than the European one, but it also freed American Jewry, psychologically and economically, from its dependence on the old country.

In time, however, doubts began to surface about the kashrut, or ritual purity, of the West Indian etrog. The notion that it was grafted, which was prohibited by Jewish law, rather than grown wild, as mandated, began to make the rounds of 19th-century American Jewry, resulting in a communal contretemps more commonly associated with the Orthodox sectarian feuds of the 20th century. As Jonathan Sarna’s richly detailed research into this chapter of American Jewish life makes clear, quite a few Jews in pre-Civil War America cared deeply about the ins and outs of rabbinic law and ritual practice, giving lie to the widespread belief that indifference once ruled the roost.

Several American Jews took to the pages of the monthly journal The Occident in the spring of 1847 — and in Hebrew, no less — to express deep concern about whether or not to buy West Indian etrogim. Rabbi Max Lilienthal of New York, and Isaac H. Levy, a ritual slaughterer from Cincinnati who claimed to have personally examined hundreds of them, expressed absolute certainty that they were grafted and hence unacceptable. Rabbi Abraham Rice of Baltimore didn’t agree. “I am so much disinclined to give publicity to any thing of a controversial nature in matters of our religion,” he declared, “but that the time is approaching when our yearly communications are made to the West Indies for the supply of Citrons, and I think it therefore my duty, for the sake of our religion, to state that these etrogim are kosher…. All rumors that were set afloat against the kashruth of these etrogim are founded in error and misinformation.” The editors of The Occident also weighed in, hoping to nip intra-communal dissension in the bud. “We do not profess to be able to decide the question where so many doctors disagree,” they wrote, “but so far as our private judgment goes, and if we are correctly informed, we must say that the West India citrons are grown on the original stock, and have neither taste, smell, nor appearance of orange or lemon.” With that, the matter rested. For the time being, American Jewry received its yearly bounty of citrons from the Caribbean.

Eventually, citrons from Greece, especially from Corfu, captured the market, giving the West Indian variety a run for its money. Some of the leading rabbinic lights of Eastern Europe, though, questioning the citrons’ purity and costliness, issued a series of prohibitions against using them during Sukkot. Rabbinic opposition to the Corfu fruit stiffened further after a ritual murder accusation on the island in 1891, which led to a series of attacks on the local Jewish population. Corfu growers and distributors, facing a crisis, sought to bypass the ban by marketing their product directly to American Jews, who they assumed would be ignorant of the ban’s existence and probably incapable of distinguishing a grafted citron from a wild one. Sure enough, advertisements in the American Jewish press began to tout the merits of “real Corfu esrogim.” The masses might have been fooled but not Ephraim Deinard, a bookdealer from Newark, N.J. Mindful of what had happened overseas, he took pen in hand to denounce those who trafficked in the Corfu citron, insisting that they “mislead the people of God” — and that they had blood on their hands.

It’s hard to say whether or not Deinard’s denunciation adversely affected American sales of the Corfu citron. By then, American Jews seeking an etrog had two less ethically compromising alternatives: citrons from the Holy Land and those from California. Citrons had been grown in Palestine since ancient times, but it wasn’t until the second half of the 19th century, when the market expanded beyond ritual use to the manufacture of perfume, that they became a commercially viable product. Under those circumstances, it mattered not at all whether they were grafted or wild, the product of scientific breeding or the legitimate offspring of Mother Nature. As a result, observant Jews tended to suspect all etrogrim from the Land of Israel, even those grown wild. In an attempt to reverse the situation, the country’s kosher citron growers banded together in 1900 to form the Fruit of the Goodly Tree Association to promote the virtues of their ritually pure product. Endorsed by the chief rabbi, the widely esteemed Abraham Isaac Hacohen Kook, the association’s efforts bore fruit. Today, an Israeli etrog is the etrog of choice for many American Jews.

Just as the kosher citron business was getting off the ground in Palestine, California was acquiring a reputation as the “orchard of the United States.” Oranges and lemons thrived in its sandy soil, giving horticulturists hope for the humble citron, as well. “The citron grows and fruits well in California wherever the lemon thrives,” the State Board of Horticulture related in 1900. “The tree is easy of culture and the preparation of the rind simple, therefore there is hardly any reason why the California-grown citron, were it accorded the same protection that the orange and lemon now have, should not supplant the imported.” Until decimated by a severe frost in 1913 from which they never quite recovered, California’s citron orchards yielded a hefty supply of etrogim.

Given the complex geopolitics of the etrog business, it is no wonder that many American Jews — then, as now — simply made do without. But not to worry. The Jewish Messenger put a new spin on things back in 1875: “If you have no etrog, oranges, grapes, pears and apples will do, not to be shaken, but to be gratefully enjoyed as God’s blessing bestowed upon our beautiful land.”

The Trail of the Elusive Etrog