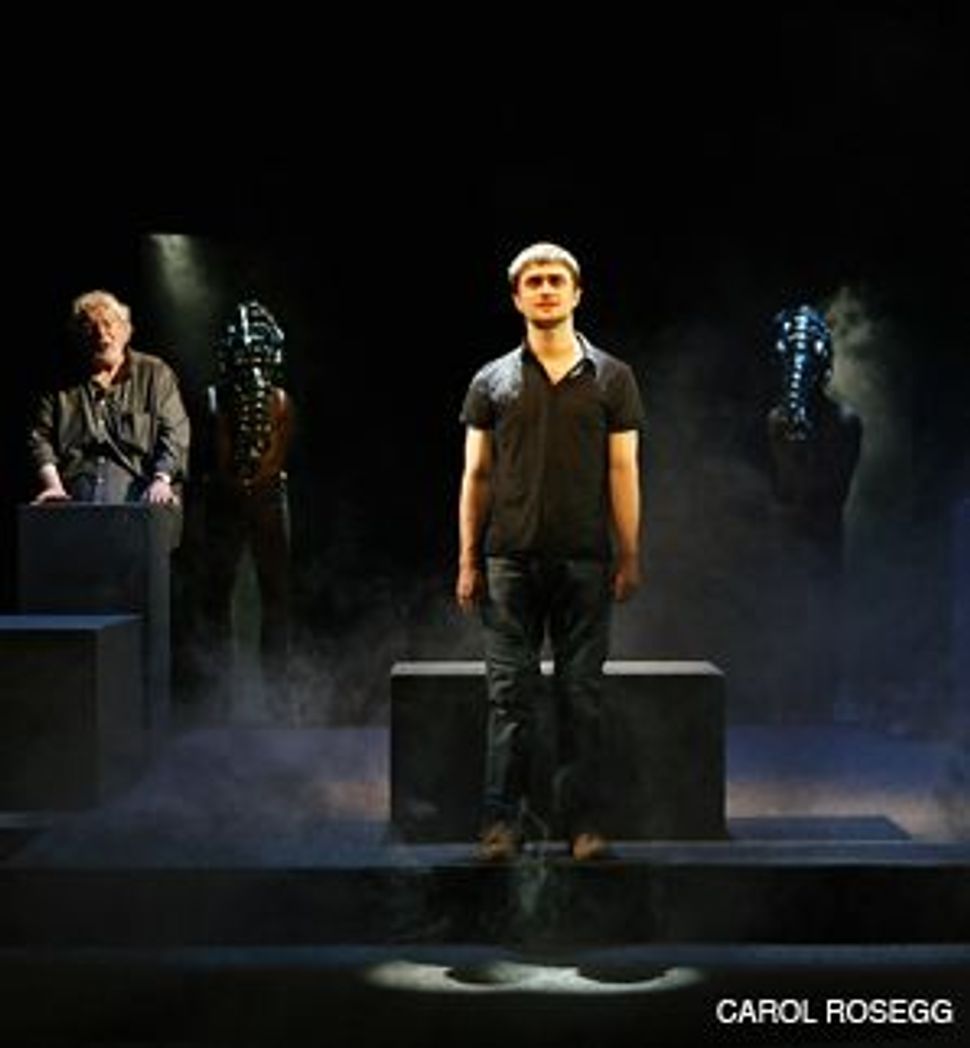 The new Broadway production of “Equus,” which opened officially September 25, revives a 1973 play that was originally seen as an attack on psychiatry. Written by Sir Peter Levin Shaffer, who was born to a Jewish family in Liverpool, England, in 1926, the play reflected an earlier generation’s rejection of Freudianism. The book “The Myth of Mental Illness,” written in 1961 by Thomas Szasz, a professor of psychiatry from Syracuse, N.Y., summed up a feeling of weariness with the talking cure and its practitioners. Shaffer loaded the deck by having his play’s psychiatrist, Martin Dysart, lament his own loveless marriage — and go on to question the basic value of the therapy he is giving to one patient, Alan Strang, a deranged boy who has blinded a group of horses. 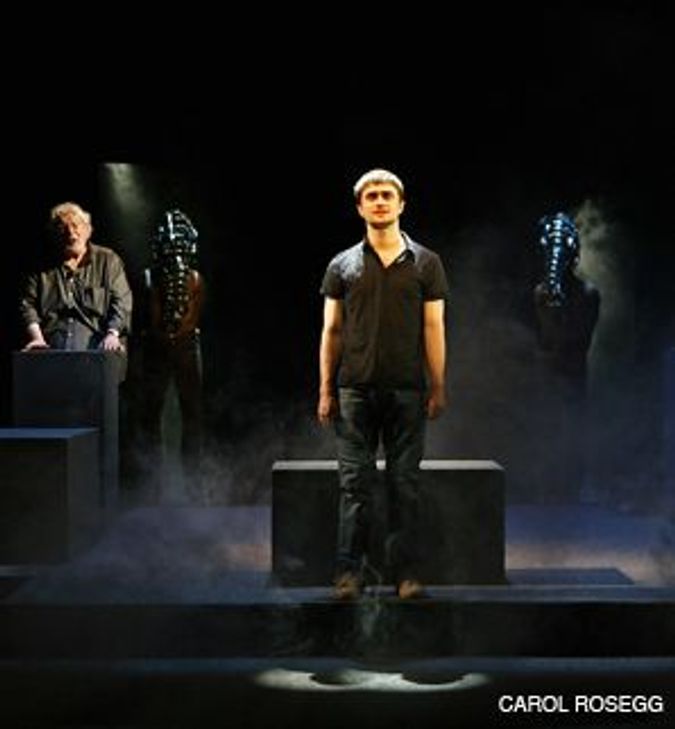 Despite this clearly pathological act, Dysart natters on at length, in Szasz-like fashion, about how curing Alan will also destroy the boy’s passionate creativity and creative inspiration. By contrast, the doctor makes a conclusion about himself: “There is now, in my mouth, this sharp chain. And it never comes out.” This theme of the older man envying the youngster pops up again in Shaffer’s hugely successful 1979 play, “Amadeus,” which made jealousy of native genius into a byword.

In detective-story fashion, “Equus” shows the psychiatrist teasing out the boy’s motivation for his violent act through a process that psychiatrists call abreaction — namely, letting go of the emotional energy linked to a repressed idea by cathartically re-experiencing that idea. Carl Jung took up abreaction — or “trauma theory,” as he termed it — but later grew disenchanted with it. Shaffer’s Dysart, by contrast, uses it with all the absolutist verve of a Scientologist putting initiates through an “auditing process,” a sort of clumsy version of abreaction therapy. As presented onstage in “Equus,” the psychiatrist’s self-doubts seem very much justified, but this is more a statement about the playwright’s portrait of psychiatry than about psychiatry itself. “Equus” is a vivid dramatic illustration of the “myth of mental illness.” But that very concept has been resoundingly countered by decades of medical literature.

More current and still compelling is the play’s illustration of a chaotic urge toward some form of irrational faith. This struggle in the dark is personified by the character of Alan Strang. The actor in the original production — and in the 1977 film, directed by Sidney Lumet — was a personification of 1970s youth: the strapping Peter Firth, a mop-haired young Yorkshireman who might have been right out of “Hair” or “Godspell.” I vividly recall attending a matinee performance of “Equus” on Broadway in which Alan Strang was played by an unknown 20-year-old understudy, Tom Hulce.

Casting the role of the lost, wayward and anonymous Alan with an unknown actor added verisimilitude to the play. Hulce gave a genuinely moving and convincing performance as a helplessly demented youngster. Alas, this choice may not correspond with the economic realities of today’s Broadway. Even so, by choosing Daniel Radcliffe, the wildly famous star of the Harry Potter movies and a talented actor in his own right, the producers of this revival have inevitably made a deal with the devil in exchange for ticket sales. In an earlier age, producers never would have tried to get Freddie Bartholomew or Jackie Cogan to strip onstage, no matter how “serious” the dramatic vehicle.

Gossip columnists, such as the Village Voice’s indefatigable Michael Musto, have already published secondhand reviews of Radcliffe’s genitalia. Some bloggers have puzzled over the apparent contradiction between Radcliffe’s Jewish heritage (his mother was born Marcia Gresham Jacobson) and the fact that nude photos from the play’s London production seem to show the actor uncircumcised. Admittedly, this type of criticism can hardly be the ideal of any serious playwright, let alone an octogenarian who was knighted by Queen Elizabeth II in 2001. Still, Shaffer may have gone overboard when he complained in a recent interview: “In the papers, I was always reading about how Harry Potter is ‘waving his other wand.’ I’m not writing porn, for God’s sake!” Any nude scene onstage today inevitably brings a different message than the original Broadway production did at the end of the Age of Aquarius.

Shaffer himself acknowledged as much on the current Broadway play’s Web site, recalling in a tone of comic horror that directors had asked him for permission to restage “Equus” using a “great new concept: This time, everybody will be naked.” It seems the nudity of two characters onstage is at once too much — and in a few cases, apparently, not enough — for audiences in 2008. By trying to minimize the overt sexuality of his own play, Shaffer conveniently ignores one of the work’s major points of interest — namely, its thematic blending of religion and sexuality into one perverse activity. Alan has transmuted “normal” attitudes toward sex and religion into his pagan worship of horses. At the end of Act 1, he rides a horse while exclaiming: “Wee! Waa! Wonderful! I’m stiff! Stiff in the wind! My mane, stiff in the wind! My flanks! My hooves! Mane on my legs, on my flanks, like whips! Raw! Raw! I’m raw! Raw! Feel me on you!” And so on.

Ultimately, any revival lives or dies on the strength of its actors. The other performance that I vividly recall from the 1974 Broadway staging of “Equus” was Anthony Hopkins, still relatively little known, as the psychiatrist, writhing in intensely gloomy existential anguish. Decades before his taste for fava beans made him notorious, Hopkins onstage as Martin Dysart cast an aura of ulcerated misery. This gave dignity to the play’s sometimes simplistic questions, such as, who is sicker — psychiatrist or patient? Hopkins was vastly more authentic than Richard Burton, who played the role in the film version while on a career downswing, and the current Broadway casting for Dysart is, in its way, as loaded with preconceptions as Daniel Radcliffe’s Alan.

Roly-poly, avuncular Richard Griffiths, remembered in the co-starring role of Uncle Vernon Dursley in the Harry Potter films (those seemingly inevitable sources of employment for British actors), played a predatory gay man in the 1986 film “Withnail and I,” which starred Richard E. Grant. In the recent theatrical production and film of “The History Boys,” he played a schoolteacher who illicitly fondles his male students. Griffiths naturally has a fuller résumé of roles than Radcliffe, ranging from Shakespeare’s “Falstaff” to a wheelchair-bound Dr. Meinheimer in the 1991 Leslie Nielsen farce “The Naked Gun 21⁄2: The Smell of Fear.” Yet, the bodily inertia of this elderly actor seems to work against Dysart’s persona — a character eaten up inside, straining against his bonds and restlessly traveling the world to find liberation. Many different actors have taken on the role, from Anthony Perkins and Alec McCowen to Leonard Nimoy and George Takei, both of “Star Trek” fame (the latter in a 2006 revival, with an Asian-Pacific cast, by Los Angeles’s East West Players). An “Equus” production currently touring Great Britain stars Simon Callow as the psychiatrist. All the aforementioned actors are, perhaps not coincidentally, trim to the point of thinness, with the notable exception of Griffiths.

With such casting decisions, the present “Equus” revival has created some of its own challenges before the curtain ever rose on Broadway. But they may well be surmounted, much like the horses in “Equus” itself, by the sheer acting talents of Radcliffe and Griffiths. The actors will be working against the odds that casting against type places on any show.

Benjamin Ivry is the author of biographies of Ravel, Poulenc and Rimbaud; he also translates from the French.