Forgotten Jewish Dada-ists Get Their Due 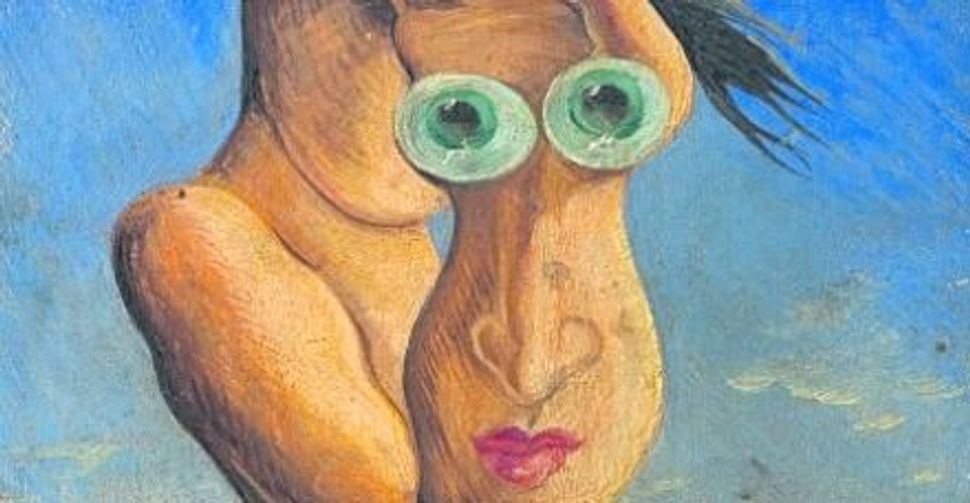 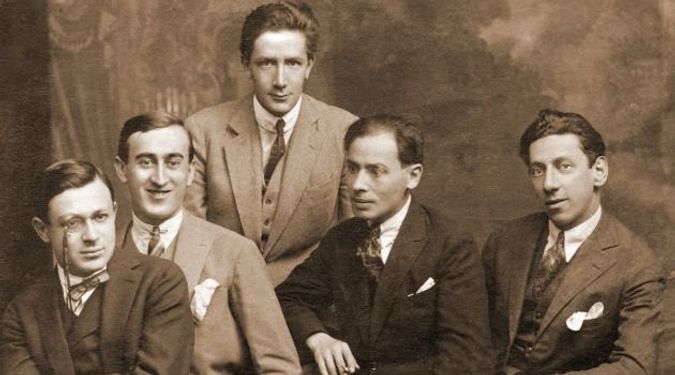 The killing fields of World War I produced a bonfire of certainties: Old ways of seeing and believing were twisted and shattered; art, architecture, book-cover designs, music, photography, politics and the very way we dressed and lived were all turned on their heads. Being “avant-garde” was exhilarating.

“Dada” was one of the most radical of the art movements to attack bourgeois society for failing to avoid the horrors of the war. The epicenter of what would become a distinctive movement was the city of Bucharest, and the participants were Romanian Jews — notably Marcel and Georges Janco and Tristan Tzara — who were essential to the development of the Dada spirit.

Dada activities included public gatherings, publication of art and literary journals, and theatrical and musical interpretations almost anarchist in nature. Although many of the ideas came from elsewhere, Hugo Ball, Hans Arp, Tzara and the Janco brothers came together in Zurich, where the main setting for the early expressions of Dada was the Cabaret Voltaire in the Spiegelstrasse, which German writer and stage director Ball had co-founded in February 1916.

In 1917, Ball left Zurich to develop his ideas of Surrealism, while Tzara, whose pseudonym means “sad country,” went on to transform an eclectic modern art nebula into an original, joyous and iconoclastic avant-garde movement. Echoes of it resonated through the century, and its influence has been felt in places as disparate as the award-winning 2010 anarchic-Dadaist Norwegian film “Sound of Noise” and art movements like Fluxus, and in musical bands as varied as the German trio Da Da Da and David Bowie. Its influence is also found in the constant self-reinvention of such artists as Madonna and Lady Gaga. 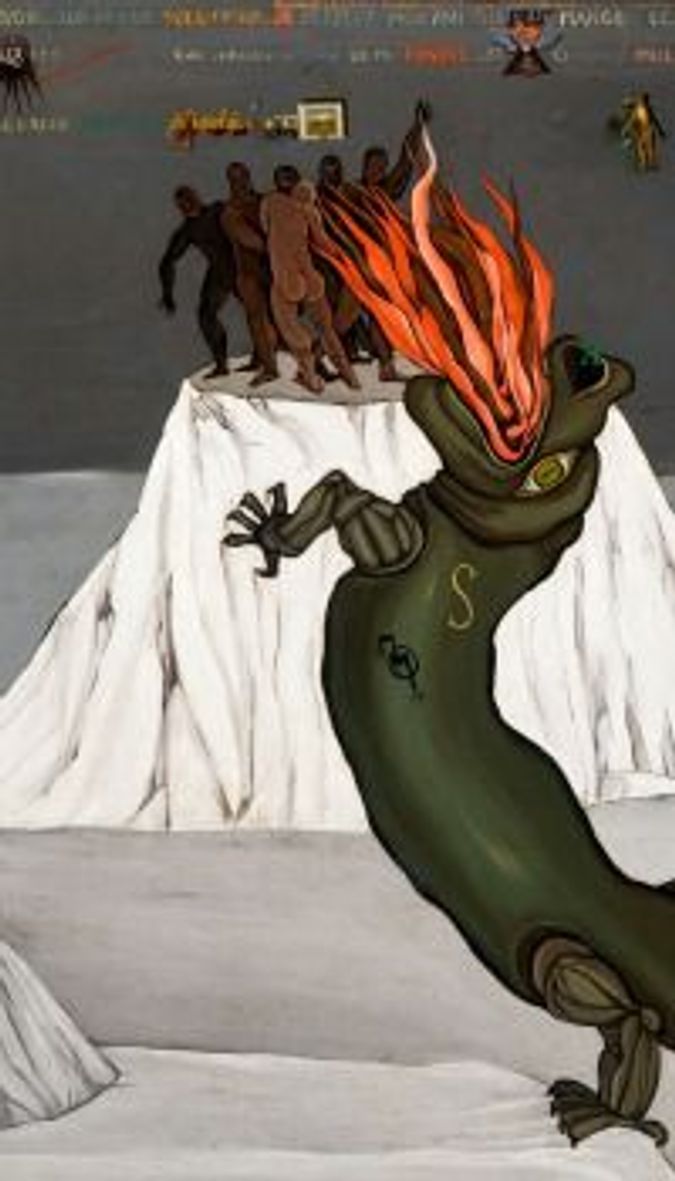 Dada-ist Dragon: Painter Victor Brauner found fame not as a Dadaist but later as a Surrealist. Image by 'Composition' by VIctor Brauner

As the ideas of Dadaism spread to other countries, its aims evolved. Berlin was political; Amsterdam centered on the concept of style, and New York had more artistic and cultural revolutions in mind. Over the years, art histories concentrated on the works of Marcel Duchamp and his “ready-mades, including his famous urinal (“Fountain,” 1917), but overlooked the crucial trailblazing role of Jews from Romania as innovators in the visual arts. This omission has now been rectified with an exhibition at Amsterdam’s Jewish Historical Museum, “From Dada to Surrealism: Jewish Avant-garde Artists From Romania, 1910–1938.”

My first reaction to the handful of drawings and 85 paintings was that I had seen all these styles before. Nothing seemed new! I felt the influence of Max Beckmann, of Dali and even of Picasso. But that is the genius of these Dadaists, whose works actually preceded those of their famous colleagues and much of what we think of as modern art. These “polite Romanian Jewish artists” — as Ball described them in his diary, “Flight Out of Time” (University of California Press, 1996) — were the catalyst that was to change the way we looked at art from that time until today. Not only did they influence painting, in their absolute abnegation of pre-existing form, but they also influenced theater, musical sounds and typography in ways that remain part of contemporary design.

During a 2008 visit to the Musée de I’Elysee, JMH director Joël Cahen learned of the lives of early prime movers of Dadaism. Tzara, M.H. Maxy and the Janco brothers — joined later by Victor Brauner, Arthur Segal and Surrealist artists Paul Păun and Jules Perahim — all were Jews from Romania. Cahen traveled with curators Radu Stern and Edward van Voolen on to Bucharest to discover that as early as 1924, the city had been a radical artistic beacon for the cognoscenti of the day but that light was sadly and quickly doused.

The poet Tzara was born Samuel Rosenstock in Bucharest in 1896. In collaboration with his close friend Marcel Janco, a painter, draughtsman and architect, he opened the first theatrical exhibition at the Dada Gallery, at the Cabaret Voltaire in 1917, featuring Paul Klee, Giorgio de Chirico and Hans Arp. Vladimir Lenin, who lived nearby, might well have been in the audience. Indeed, in his 1974 play “Travesties,” British playwright Tom Stoppard imagined Tzara, Lenin and another nearby expatriate, James Joyce, in an artistic debate full of pastiche, intellectual joie de vivre, sound poems and spoof: all the components of Dadaism.

In the exhibition catalog, Stern, an expert on Romanian avant-garde artists, explains how the Jewishness of the Dada remained hidden for so long. He is straightforward in his belief that “deeply ingrained anti-Semitism in Eastern Europe led many Jewish artists to change their names in an attempt to become free of nationalistic hindrance. Even with the lifting of the Iron Curtain, art historians, with few exceptions, have shied away from publishing research on Jewish artists.”

Stern suggests that nationalism and a fear of modernity were factors in the occlusion of Jewish influence as intellectuals and ordinary Romanian citizens accepted laws that would deprive Jewish people of their citizenship. Throughout the 1930s, attacks that targeted the ethnic origin of avant-garde ideas became more frequent. National art was demanded, and people described as “pseudo-Romanians” were rejected as nonnative, lacking an organic link with the soil. Jews were denounced as being incapable of having a Romanian artistic vision.

Only one painting in the exhibition portrays a specifically Jewish subject. In “Group Portrait” (1922), Victor Brauner depicts three old Jewish men with masklike faces. Although he also made “Adam and Eve” (1923) and “Drawing With Hitler” — of a man punching the German führer — this painting is in complete contrast to his other works of distorted silhouetted human bodies amid vegetal forms. Brauner’s Dada highpoints were a product of his fine arts training and his keen interest in graphic design.

It was Brauner who, in October 1924, edited what many art historians believe to be the most radical and avant-garde publication ever to be produced in Romania, the Dadaist review 75HP. He then went on to produce drawings for the avant-garde magazines Punct (Full Stop) and Integral. Along with a number of colleagues in the 1930s, as the title of the show suggests, Brauner changed direction and joined the ranks of Surrealist painters through his friendship with Yves Tanguy. Unlike Dada’s profoundly nihilistic wartime iconoclasm, surrealism brought him international success.

Dadaist artist Maxy’s “Nude With an Idol” (1924) echoes into the future. Maxy’s visceral images of primitive art suffused with the human body would show up 10 years later, in the torrid images of British painter Edward Burra. Like Maxy, whose art in his early days expressed a haunting vision charged with energy and menace, Burra, whose paintings revealed the painful and ravished awareness of the moral state of Europe and its sinister poetry, foresaw another loss of logic and reason, and even more dreadful killing fields.

Maxy took a path very different from that of his early Dada comrades. Never leaving Romania, he juggled his artistic beliefs to remain in a society where he became a political activist and a clandestine member of the Communist Party. After the war, he attempted to introduce the aesthetics of Socialist Realism into Romanian visual arts, until the 1960s, when he sought a return to his old roots and created a hybrid style incorporating different elements from his avant-garde youth.

Most of the featured artists sought sanctuary at one time or another in other lands, where their ideas cross-pollinated with local artistic ferment in the fields of theater, construction, music, poetry and typographical design. Though this exhibition marked the first time that the majority of the 100 paintings, drawings and illustrations had been seen outside Bucharest, it lacked exuberance.

For an exhibition remembering a subversive, iconoclastic movement, it was tame and too bourgeois in tone, lacking the theatrical antics, Expressionist costumes, loud sounds and audio excitement that gave Dada its distinctive flavor. And as for movement, the flickering sepia-and-white film was poorly displayed. While it’s true that visual art sometimes needs space for its contemplation, this exhibition should have had some banging of cymbals. The rediscovery of artists makes it an interesting show, but Tzara and company would not enjoy it. It’s just not Dada.

Bill Holdsworth is a British writer living In the Netherlands.

Forgotten Jewish Dada-ists Get Their Due