Have No Fear, It’s Still ‘Porgy and Bess’ 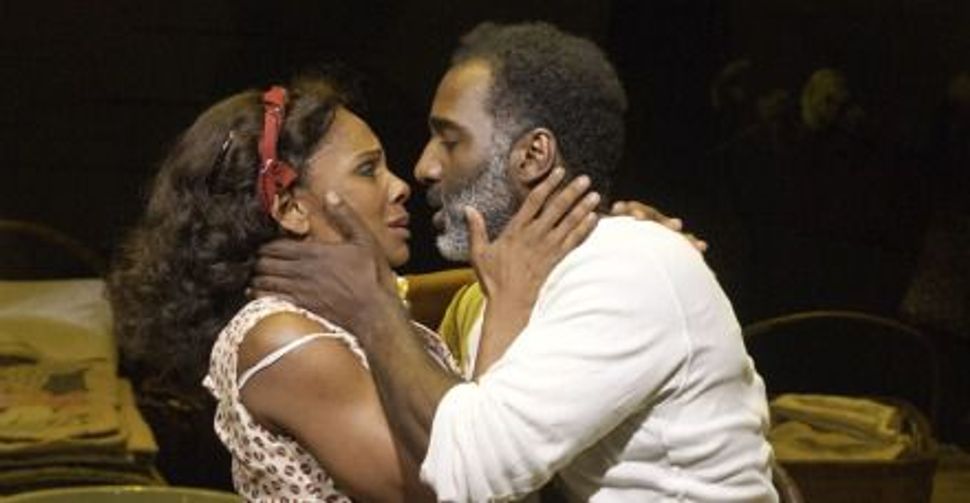 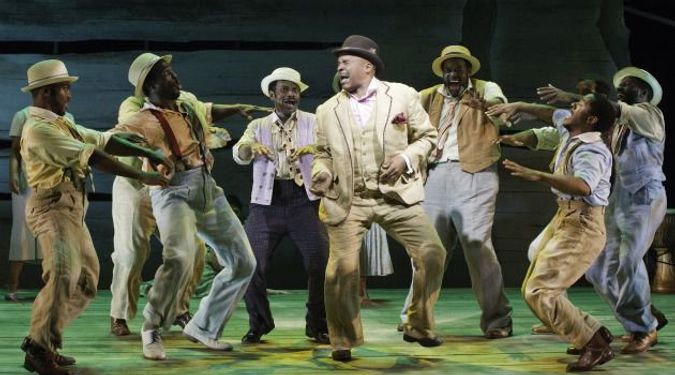 New Ain?t Necessarily Bad: The Broadway-bound revival of ?Porgy and Bess? isn?t nearly as dramatically different from past versions as critics made out. Image by Michael J. Lutch

As the curtain fell after the fourth round of applause for the American Repertory Theater’s highly anticipated and highly controversial revival of “The Gershwins’ Porgy and Bess,” which opened on August 31 in Cambridge, Mass., one couldn’t help but give thanks for George Gershwin and Audra McDonald, who played the female title role. Owing to Stephen Sondheim’s rant in The New York Times a few weeks earlier, in which he eviscerated the production team for what he perceived as a disrespectful attitude toward an indelible classic, the audience’s mood before my showing was skeptical and chatty, contributing to the already deafening noise around the show rather than focusing on what might be contained within.

“Well, they’ve already dug themselves a big hole with this Sondheim mess,” the gentleman sitting next to me croaked. He reached into his jacket pocket, pulled out a crumpled copy of Sondheim’s letter, skimmed it over and offered it to me. “We’ll see what happens,” he said. 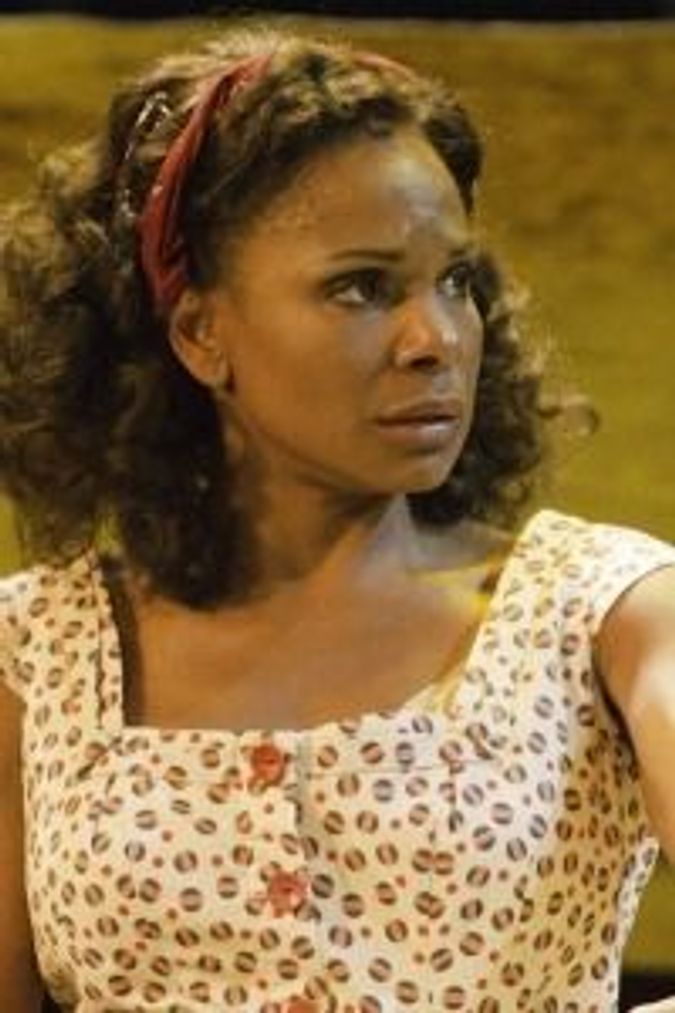 Then two things happened that made the audience settle down and focus. The first came during the overture, when the orchestra piano played a few of those jazzy, chromatic blues chords that could only be Gershwin and fondly recalled “Rhapsody in Blue.” The second was that McDonald made her entrance as Bess, drunk and hanging off the arm of the scariest brute onstage, shaking with “happy dust” jitters and fragility beneath frazzled hair and a garish red party dress that made everyone forget McDonald’s characteristic polish and poise as a stage performer. But more about her later.

The changes to the tragic love story between the good-hearted cripple, Porgy, and the damaged, wandering Bess, aren’t nearly as drastic as Sondheim and the Times led everyone to fear. The original 1935 production was a sung-through opera, with musical recitative where there is now spoken dialogue. Porgy (Norm Lewis) used to get around with the aid of a goat cart, but in this production, directed by Diane Paulus and with a book adapted by Suzan-Lori Parks and by Diedre Murray, he has upgraded to a cane and a leg brace. The running time has been cut from a little more than three hours to a svelte two and a half. The original ending has survived intact, despite press and program notes suggesting otherwise (there was talk of a new, more upbeat ending leading up to the run, but it was scrapped during previews, and the original was restored).

The changes are even less egregious in light of the fact that “Porgy” has been revived and reworked relentlessly throughout its history (there is a straight play, and a film version starring Sidney Poitier), though in recent years it has been performed mainly as an opera. In fact, the 2011 version is almost identical to the description of the 1942 Broadway revival.

Arguably the most well-known, well-loved American opera, “Porgy and Bess,” with music by Gershwin and lyrics by his brother, Ira, is no stranger to controversy. At various points throughout its history, the show has caused a furor over questions of black portrayal on diametrically opposing ends of the spectrum: Gershwin insisted that the original production have an all-black cast — a radical notion amid the blackface theater still common in 1935. As a black folk opera written by a Jewish composer, however, even its performers commonly decry it for being racist and perpetuating harmful stereotypes.

I suspect the reason that “Porgy” has survived all this tampering and argument has to do with George Gershwin’s sumptuous score. The crowning jewel of the composer’s celebrated, too-brief career (he died suddenly of a brain tumor, at 38), “Porgy and Bess” is a cornerstone of American musical theater, combining jazz, folk and Tin Pan Alley elements into an operatic framework to create an immortal, uniquely American work. If the music remains untouched, it’s easy to forgive missteps elsewhere.

Fortunately, there are few such missteps. Paulus has assembled a uniformly excellent cast, led by McDonald and Lewis. McDonald’s Bess is as much an acting triumph as a vocal one: She is as pitiable as she is untrustworthy. Weakness and fear permeate every facet of her performance. It’s spooky to hear such a confidently gorgeous soprano singing voice (which here is on full display) become gravelly, clipped and even ugly in speech. Early on, Porgy gently urges Bess to attend the funeral of the man that her former lover, Crown (a terrifying Phillip Boykin), murdered during a craps game. As the man’s widow, Serena (Bryonha Marie Parham), wails her lament, “My Man’s Gone Now,” tear-wrecked Bess stews in the corner, her guilt so palpable and heavy, it seems she might collapse under its weight at any moment.

Lewis, the handsomest bum-legged beggar you’re ever likely to see, keeps up with her as Porgy (no easy feat). His face radiates optimism and kindness; his steady presence allows Bess the anchor for her buzzy, frantic self-loathing to reach its full depth. Lewis’s singing isn’t too slouchy, either: The high belt at the end of “I’ve Got Plenty of Nothing” was so pretty, it gave me a back spasm.

This is by no means a perfect production, and most of its key problems are matters of scale. Paulus’s Catfish Row, the South Carolina tenement where the characters of Porgy and Bess scrape together a community, is minimally staged and sparsely populated, making it feel less vibrant and specific than it ought to be. The large group gospel numbers, like “Leaving for the Promised Land,” are sung beautifully, but they beg for twice as many voices. Paulus has justified the smallness in terms of making the production more emotionally authentic, stripping away anything distracting. But scaling down an opera with a hurricane as its central plot device is a strategy that might need rethinking.

Still, “Porgy and Bess” would be worth the time in any incarnation. With McDonald and Lewis at the helm, Gershwin’s masterpiece is in talented hands.

“Porgy and Bess” is running at the American Repertory Theater until October 2. It will move to Broadway in December.

Schuyler Velasco is a correspondent for the Christian Science Monitor, in Boston. Her work has appeared in Salon, Flavorwire and Back Stage, among other publications.

Have No Fear, It’s Still ‘Porgy and Bess’