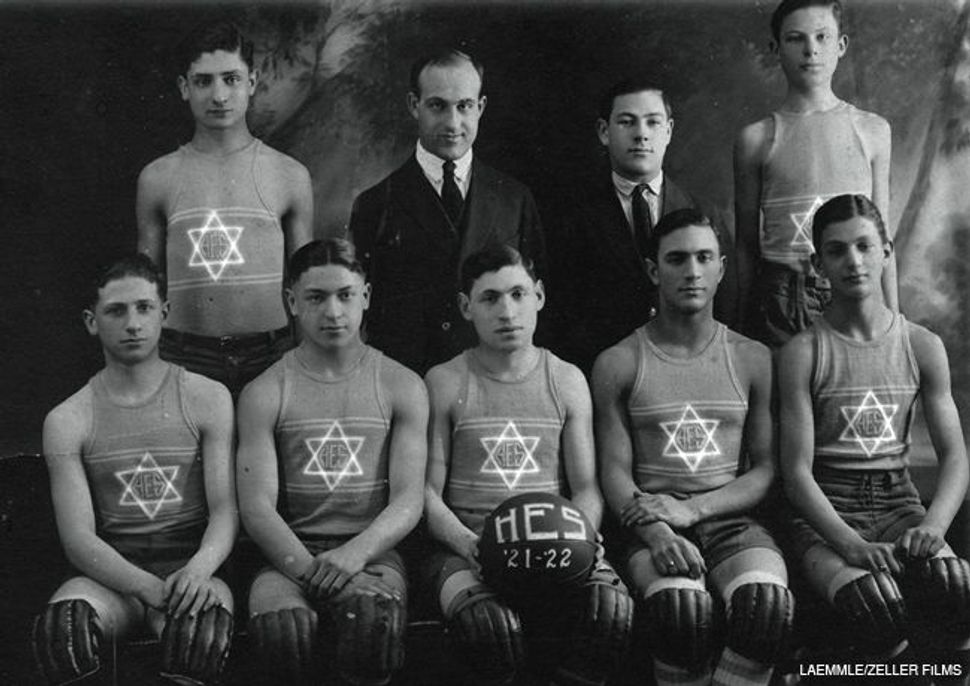 It’s true that Major League Baseball has seen a renaissance of Jewish players during the past few years, but the historic American Jewish sport is surely basketball. It makes sense if you think about it. Easy to play on the concrete surfaces that are ubiquitous in urban areas, basketball was the sport most accessible to the sons of the immigrants who had flocked to the United States between 1880 and 1920.

As David Vyorst makes clear in his comprehensive and entertaining documentary, “The First Basket,” those sons took to the game with fervor. Interview after interview with former players and coaches makes clear that basketball, not religious observance, was what mattered to this Americanizing generation.

“My father was busy trying to make a living. My mother was busy taking care of the household. And we were busy in the streets, and in the schoolyard, playing basketball and growing up,” Ralph Kaplowitz says in the film. Kaplowitz lived in the Bronx and later played two years for the New York Knicks.

Kaplowitz wasn’t alone in making a religion out of basketball: The Jewish kids who learned the game in the rough-and-tumble New York City neighborhoods of Brooklyn’s Brownsville and Williamsburg, and on Manhattan’s Lower East Side and the Bronx’s Grand Concourse, later stocked the top collegiate teams and the early professional ranks. Indeed, the film’s name stems from the fact that in 1946, a Jewish player, Ossie Schectman, scored the first basket in the Basketball Association of America, the precursor to today’s National Basketball Association

Considering the paucity of Jewish players in today’s NBA (there’s currently one, the Los Angeles Lakers’ Jordan Farmar), it’s astonishing to remember that several members of Schechtman’s 1946–1947 Knicks team were Jewish, as were players on other teams. Some still affectionately refer to the game that they and top coaches such as Red Sarachek and Red Auerbach developed — emphasizing teamwork, crisp passing and defense — as “Jew ball.”

This style of play originated earlier in the 20th century, when Jewish players competed on both the amateur and semiprofessional levels. Teams were sponsored by settlement houses that wanted to Americanize immigrants, and by labor unions and Workmen’s Circle/Arbeter Ring branches. Players on the most famous of these teams, the South Philadelphia Hebrew Association, or SPHAs, wore Hebrew letters and Stars of David on their uniforms. What’s more, after many SPHAs games, the court was turned into a dance floor where young Jews could socialize and look for husbands and wives.Some of the figures mentioned in “The First Basket” — Hall of Famer Dolph Schayes and current NBA Commissioner David Stern, both of whom were interviewed in the film — are well known. Others are less familiar to casual fans. Barney Sedran, for instance, was an early 20th-century player who, at 5 feet 4 inches, is believed to be the shortest player in the Basketball Hall of Fame. During his heyday in the 1910s and ’20s, Sedran played in as many as three games a day, often for different teams.

The Jewish connection to basketball isn’t entirely rosy. “The First Basket” points out that the roots of the 1950s-era college basketball scandals rest in the Catskills summer resorts. The cooks apparently were the first to fix the games with college players, who were there for summer jobs and a bit of basketball.

In the Catskills, gamblers first made the connections that would eventually rock the college basketball world and lead to the suspensions of several City College of New York players, as well as players from other schools in New York City and around the United States. No longer would such New York City teams as CCNY, New York University and Long Island University dominate college hoops, as they did between 1935 and 1951. In a devastating archival clip that is part of the documentary, Nat Holman, the legendary CCNY coach, admits that he never got over his players’ participation in gambling.

The Catskills gambling story could be a nice segue into some of the pitfalls of Americanization: Do any of the players interviewed for the documentary have regrets about their rebellion against their parents’ religiosity? Did they maintain their Jewishness, and did they pass it on to their children and grandchildren? An exploration of these questions would have added another layer of complexity to the film.

Also, the final section of “The First Basket” feels a bit disjointed. Sure, Holman helped bring the game to Israel, contributing to basketball’s globalization. But the link between Maccabi Tel Aviv’s stirring victory in the 1977 European Cup semifinals against a Soviet team and the acculturation of American Jews through basketball, which is the film’s focus, feels tenuous.

To its credit, however, “The First Basket” is a rare documentary that not only provides context (thanks to interviews with scholars of Jewish history), but also is fun to watch. The film’s story, while covered in such works as Peter Levine’s 1992 book “Ellis Island to Ebbets Field” (Oxford University Press), has not been put on celluloid in such detail.

Vyorst’s interviews allow for a glimpse into a generation of Jews who shaped basketball — and who are proud of their accomplishments and their toughness. As Jack “Dutch” Garfinkel, who played for the Boston Celtics from 1946 to 1949, remembers with a smile: “I’m the first man who used the look-away pass in basketball. My passes were very tough. I broke a lot of fingers.”

(‘The First Basket” opens in New York City on October 29 and in Los Angeles on November 14. For more information, go to www.thefirstbasket.com.)

**Peter Ephross: ***A few of the older players and coaches you interviewed passed away during the making of “The First Basket.” Do you see the documentary as an opportunity to record a history that otherwise could be lost?*

David Vyorst: Absolutely. It is one of the last oral history projects, if not the only, to record that generation of Jewish basketball players. Very tragically, over the last couple of years, Sonny Hertzberg, Red Auerbach, and Jerry Fleishman, as well as several others, have passed away.

Many of the film’s more recent basketball subjects are coaches or owners. How did Jews shape both the way the game was played and the way it was sold to the public?

The Jewish role in basketball and the effect that Jewish people had on the game in some ways illustrate some of the better things about the Jewish people. To me, the game that the Jewish people developed required a lot of teamwork and playing strong defense. And I think those are Jewish values; everybody looking out for one another, to me, is an intrinsic and very important Jewish value.

*Didn’t other ethnic and racial groups have major roles to play in the development of basketball, as well? How would you answer critics who might wonder if it’s necessary to focus on the Jewish roots of basketball? *

I would say that they would be raising a valid point. I’m not denying the role other ethnic groups have played in the development and evolution of basketball, and it’s certainly an important game to many different groups. I’m looking at it more from the other angle: I’m looking more at what basketball meant to Jewish people than what Jewish people meant to basketball. The only other sport that rivaled basketball’s popularity in the ’20s, ’30s and ’40s in the Jewish community was boxing. It’s interesting, because this is very contrary to people’s perceptions today.

Contrary to people’s perceptions how?

From most of the people you’ve interviewed and the way you tell the story, it seems to be one of assimilation. In the fight between Judaism, at least as a religion, and basketball, basketball won out.

No, my gosh, no. No, no, no, no, no. Basketball is even very popular in the Modern Orthodox movement. And Yeshiva University — who I don’t think any of us would accuse of giving up their Jewish roots — has a basketball team that they’re very proud of.

Peter Ephross’s articles and reviews have appeared in The Village Voice, on Nextbook.org and in Antiques & Collecting Magazine, among other publications.