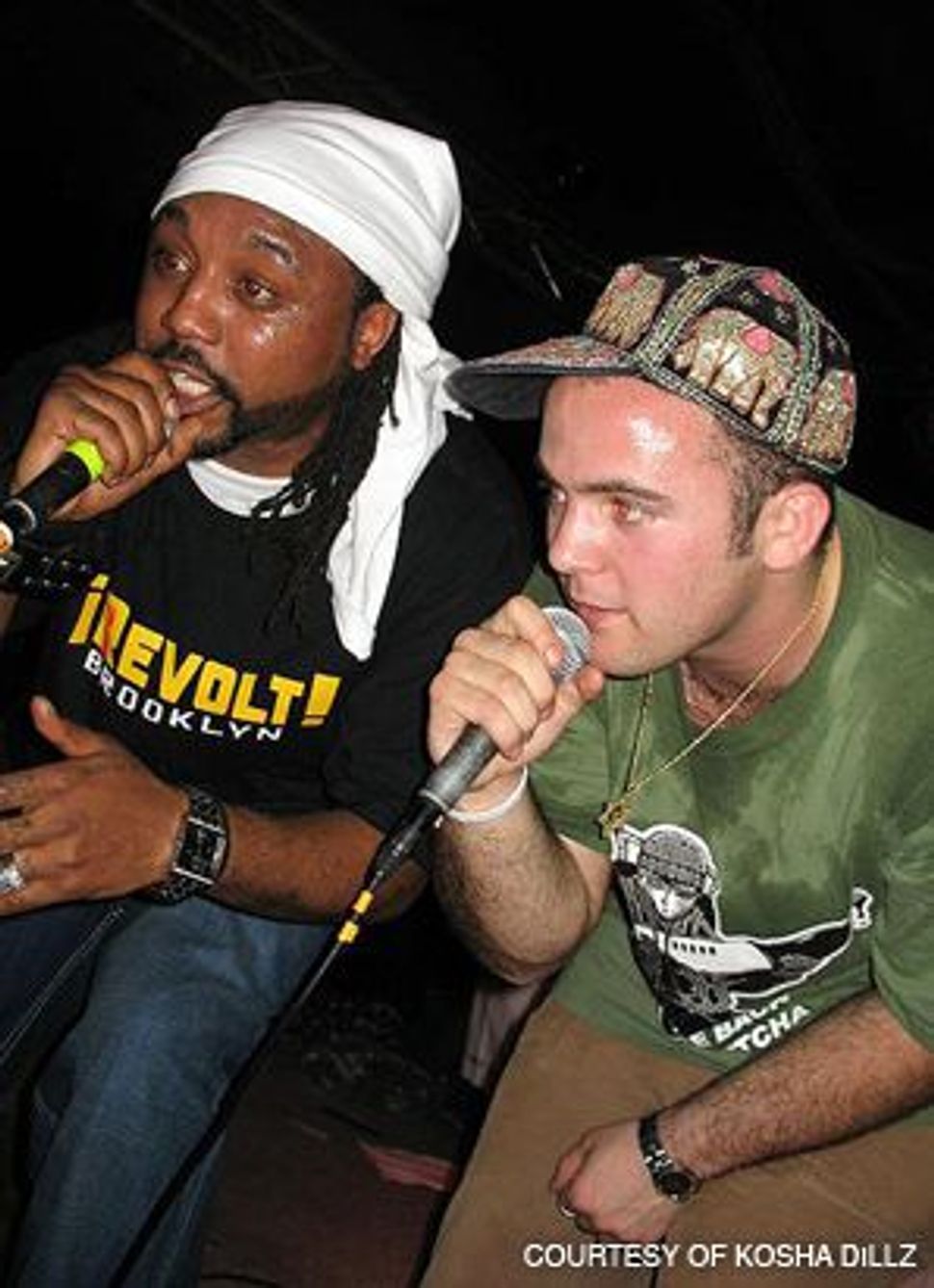 There has never been a luckier or more morbid time to be a Jewish rapper; Jewish white suburban boys can now look to Israel to find some mass misery to rhyme about, taking their pick from suicide bombings, inner-governmental strife and Holocaust paranoia. Oh, and there’s also the women who — army-hardened and Mariah Carey-shaped — certainly could shimmy into any hip-hop video shoot and play chief hip-hop girlfriend. 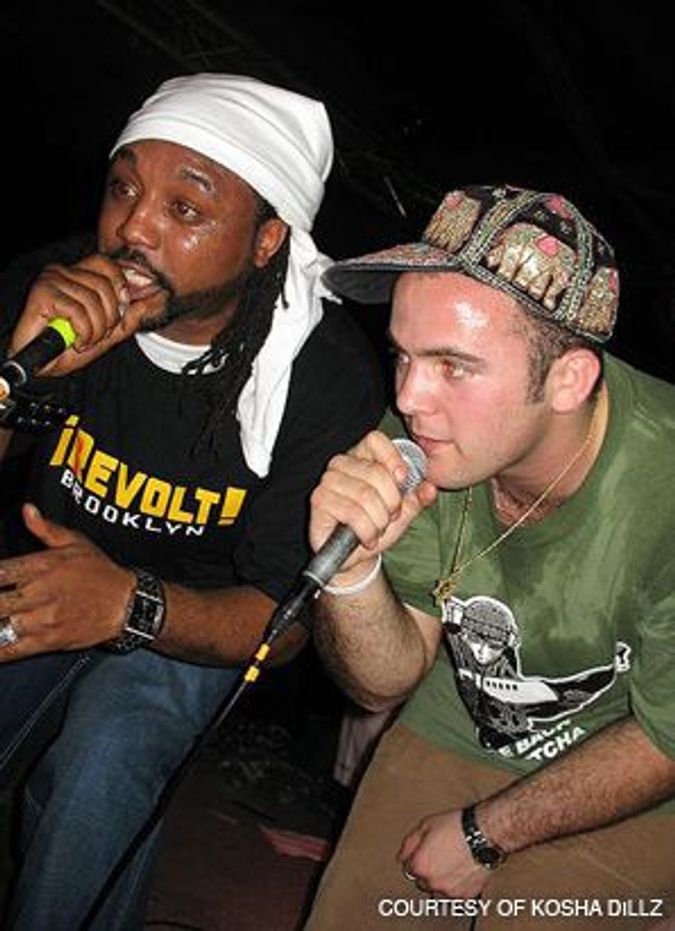 But Kosha Dillz, a New Jersey-bred Jewish rapper, born Rami Even Esh, will have none of it. He rhymes in his title track, “Freelance vs. Written”: “I got news for promoters who think I’m doing my next show for exposure, rappin’ Israel in the hood.” Kosha Dillz is tired of Jewish rappers suddenly taking on the wide scope of Israel in their lyrics in the hopes of gaining hip-hop credibility. Instead, he digs up material from his own story, which was potholed with drug use, cocaine dealing and prison time.

His tracks exude authenticity in thick clumps, and fellow artists have taken notice. The black, non-Jewish rapper C-Rayz Walz — who has a video in rotation on the cable channel BET and has collaborated with M-1 of Dead Prez, the Insane Clown Posse and El-P — contacted him a few months ago to record an album, which ultimately became the twosome’s “Freelance vs. Written” CD. On the album’s leadoff track, “Unheib” (Yiddish for “Beginning”), Walz reminisces about the collaboration’s first, in-utero moments, before the two artists met: “Alright, “I’m gonna give him a chance/Holler at him on MySpace. Turn it up, Kosha, I’m givin’ you the green light.”

The album travels promiscuously through topics of all colors: girls, childhood memories, Judaism, national holidays (and Kosha Dillz’s disillusionment with them), drug use and jail time. In the hook-heavy track “March to the Death,” Kosha Dillz imagines life’s final moments on death row (oh, those woozy conclusive last thoughts!) while still reminding us that he is a nice Jewish boy. “Can’t escape lethal injection/electric chair suits my hair/lawyers appeal turn over/no more Grandma’s apple turnover.” Such bipolarity works well on a hip-hop album, keeping listeners leaning toward the speakers in suspense: What, oh what, is going to happen next? Will Kosha Dillz be smoking a corpse through a crack pipe, or rap about Hanukkah and, um, things that rhyme with it?

Which brings us to what should be the eighth wonder of the hip-hop world: What’s a rapper to do about his Jewish heritage? The duo seems to understand that empty Jewish referencing isn’t that exciting anymore, but Kosha Dillz and Walz still want to try to make the shtick work, to refract it. In the fast-paced bumper “Bong Bong,” Kosha Dillz gives Jewish hip hop an X-rating for perhaps the first time in the genre’s history, spitting: “Yo son, she watchin’ ya/Bumpin’ ya CD and Sunday school dreamin’ ‘bout rubbin’ ya yarmulke (ahh your hairy chest is sexy)/Hot damn, and you still respect me?” But Judaism is also discussed in a serious, indebted tone, with Kosha Dillz giving several shout-outs to God for coming into his life at just the right time (that is, prison time). If he isn’t bragging about his murky past on this CD, he’s at least showing it off, but can you blame him? It remains the inconvenient truth that a stint in prison might be the only way for a rapper to be forgiven for being an (dum da dum dum) upper middle-class Jew.

For all the self-seriousness of the album, it must be noted that these boys are hilarious. Often, there’s a party before the music, the artists speaking in cartoonified voices, whooping and hollering. Funniest is the moment in “Freestyle vs. Written” when Walz becomes a Muppet crossed with a kid on helium, rhyming, “I always knew Kosha was gonna come to be a smart man, ain’t that true?” Later in the album, Kosha Dillz remembers a girl threatening him, ever-so gently and poetically: “I will kill you, you stupid little piece of gefilte fish!”

Sonically, the album is all firecrackers. Kosha Dillz sprints straight forward, always thinking about his next verse while he’s still on the previous one. His voice is energetic, teenage and a bit on the smart-alecky side; is he reporting live from the backseat of a school bus? But of course, for every sound there is the equal and opposite sound. And when Walz takes the microphone, he throws the song off-center and slows it down, which isn’t necessarily a bad thing. Walz wants to hang out for a bit, letting his words garble around his tongue, speaking with all the dead spaces and exasperations of a telephone conversation. Still, the two artists do share one trait: thick voices that certainly start in extra-large lungs, then travel to us through unobstructed airways. You are left wondering if sound alone could ever create hydraulics.

The album has more weirdo brilliance than most rap albums, but there are also hints of what’s to come if the duo becomes too successful. In “Unheib,” Kosha Dillz covers the dreary ground of rappers already hitting platinum: Rappers rapping about rapping. “Kosha Dillz was the illest on the battle scene/Evolution of fans and dreams/What technique was in Playboy magazine?” Um, does anyone but Kosha Dillz really care?

Rachel Ament was a member of the writing staff for the independent film “Nola,” produced by “Married With Children” producer Harold Sylvester. She writes for, among other publications, The Jerusalem Post, Oxygen, The Advocate and Moment.