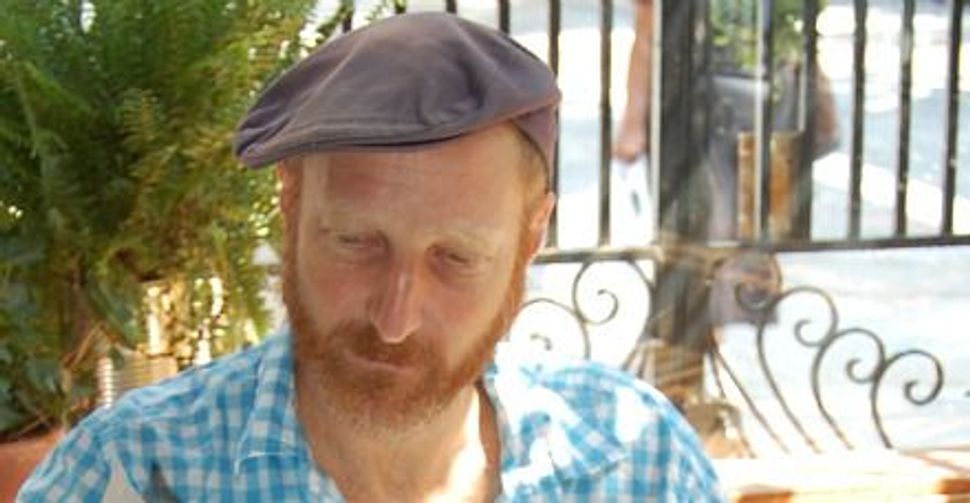 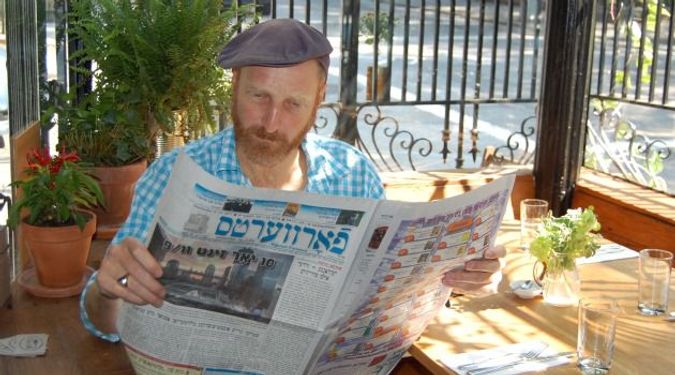 ?Bored? in Brooklyn: Writer Jonathan Ames relaxes with the Forverts at a cafe near his home in Boerum Hill. His show aims for a comedic take on the hippest borough. Image by Ezra Glinter

One of the things I love about New York is the way the culture constantly beams my surroundings back to me. It gives life a different feel than it has in other places; the extra layer of reality bestowed by art seems to rub off a little bit when it’s my reality also. Seeing iconic locations as a matter of course turns the tourist’s sensation of actually being there into the more self-congratulatory local’s satisfaction of actually living there.

When it comes to TV, though, New York’s representation is limited mostly to Manhattan. I can get my Big Apple fix in everything from “30 Rock” to “Louie” to “The Life and Times of Tim,” not to mention the most recent season of “Curb Your Enthusiasm.” But the buzz these days is all about Brooklyn. The It Borough’s hipster chic has occasioned plenty of New York Times trend pieces, but not many TV shows. One of the few is “Bored to Death.”

The HBO comedy is the creation of author Jonathan Ames, a fixture of New York’s downtown literary scene. Never very famous, he became a minor cult figure thanks to his exhibitionistic style, which he honed in a New York Press column called “City Slicker” from 1997 to 2000 and in performances for the storytelling organization The Moth.

In his columns and stories, Ames talked about everything from going prematurely bald to his experiences with transsexual prostitutes to a painter friend who fashioned a prosthetic vagina called the “mangina.” “Bored to Death,” however, which began its third season October 10 and claims a regular audience of more than 1 million viewers, represents for Ames an unprecedented level of success. With it, he and Brooklyn walk into the spotlight together.

Although Ames is the author of fiction as well as nonfiction (“Bored to Death” has its origins in a 2007 story he wrote for the literary journal McSweeney’s), his real subject has always been himself. It’s no surprise, then, that the show stars Jason Schwartzman as “Jonathan Ames,” a Brooklyn writer, who, at the start of the first season, has just been dumped by his girlfriend and is struggling to write his second novel.

In the spirit of hammering a thumb to cure a headache, Jonathan decides to seek distraction from his troubles by advertising himself as an unlicensed private detective on Craigslist. He is joined in his capers by his beardy comics artist friend, Ray Hueston (Zach Galifianakis), a character loosely based on Ames’s real-life comics collaborator, Dean Haspiel, and by George Christopher (Ted Danson), a white-haired, strong-jawed socialite, pothead and magazine editor who in the new season leaves publishing to open an “artisanal restaurant” called George on Jane.

Even though it takes some of its cues from classic noir fiction, the show is not particularly dark. Instead, “Bored to Death” captures the Brooklyn feel while buffing it to a brighter-than-life sheen. Its scenes are full of comely brownstones, blazer-appropriate weather, locavore restaurant openings, Park Slope lesbians, organic food co-ops, Brighton Beach Russians and plenty of adventure-hungry creative types. It advertises not just a borough, but also an entire mentality of living like a tourist in your own city, which, in New York, is entirely feasible.

The plots feature a mix of Ames’s signature themes, including alcoholism, Jewish neuroticism, boxing (he has fought nonprofessionally as “The Herring Wonder”) and the seedier side of human sexuality. But “Bored to Death” is more buoyant than Ames’s usual bathroom-sink realism. Instead of cockroach-infested East Village indigence, the show offers a sunny, pot-smoke filled vision of Brooklyn indulgence. Here, everyone has an abundance of leisure time, money worries are solved with part-time teaching jobs and all problems are, above all else, charming.

This is a significant departure for Ames. His writing, while funny, looks unblinkingly at the problems brought on by poverty, loneliness, addiction and lack of success. In his prose, as in his life, the drugs of choice are alcohol (his graphic novel with Haspiel is titled “The Alcoholic”) and occasionally cocaine, and the results are never positive. In a New York Press essay titled “Crack-Up,” he describes smoking crack with a transsexual prostitute on Christmas night. In another piece, he recalls getting blackout drunk at a party, only to come to his senses hours later, telling “an utterly X-rated, lewd, poor-taste tale” to the fiction editor of The New Yorker, the one person at “the one magazine in America that can help a fiction writer actually get well known enough so he can pay the rent with consistency.” In “Bored to Death,” by contrast, the drug of choice is pot, which results in giggly monkeyshines.

Similarly, Ames’s sense of Jewish identity is more comic in the show than it is in his writing. For Ames the fiction writer and essayist, Jewishness is characterized by an anxiety of difference, with that difference consisting mostly of excess anxiety. In “Bored to Death,” Jewishness is played for laughs, from a reference to Sabbath candles as sex toys to Ray defending his possession of a long foreskin by exclaiming, “Not everyone in New York is Jewish, you know!” If anything, the easy references to Jewishness in “Bored to Death” represent the opposite of Ames’s fears of being found out and rejected from WASP society. In Ames’s Brooklyn, Jewishness might as well be the norm.

But despite its lighter tone, “Bored to Death” creates a more completely realized world than any presented in Ames’s writing — another indication, perhaps, that TV is the most exciting art form of our time. The show’s robustness is largely thanks to the talents of Galifianakis and Danson, Ray and George being among the few of Ames’s characters to escape his solipsistic tendency. If anything, the least compelling character in “Bored to Death” is Jonathan Ames, if only because Jason Schwartzman doesn’t succeed at being anybody other than Jason Schwartzman.

If you want to really find fault with the show, however, you might blame it for presenting an overly rosy picture of its borough. While there are plenty of not-so-starving artists, what’s missing are the genuinely poor, the crime-ridden, the nonpretty and, to some degree, the nonwhite. To a large extent, “Bored to Death” is a show about the triumph of Brooklyn gentrification.

This accusation has some merit, but “Bored to Death” doesn’t set out to create a realistic portrait of Brooklyn in its entire enormous diversity. Instead, it represents a certain slice of the Brooklyn sensibility that, in Jonathan Ames, has found its idiosyncratic and unlikely bard. I, for one, will gladly take it. After all, it’s always nice to be told on TV what a great place it is that you live in.

Ezra Glinter is editor of The Arty Semite blog and is the arts and culture fellow at the Forward.