An American Landscape Architect and His Sabra Designs 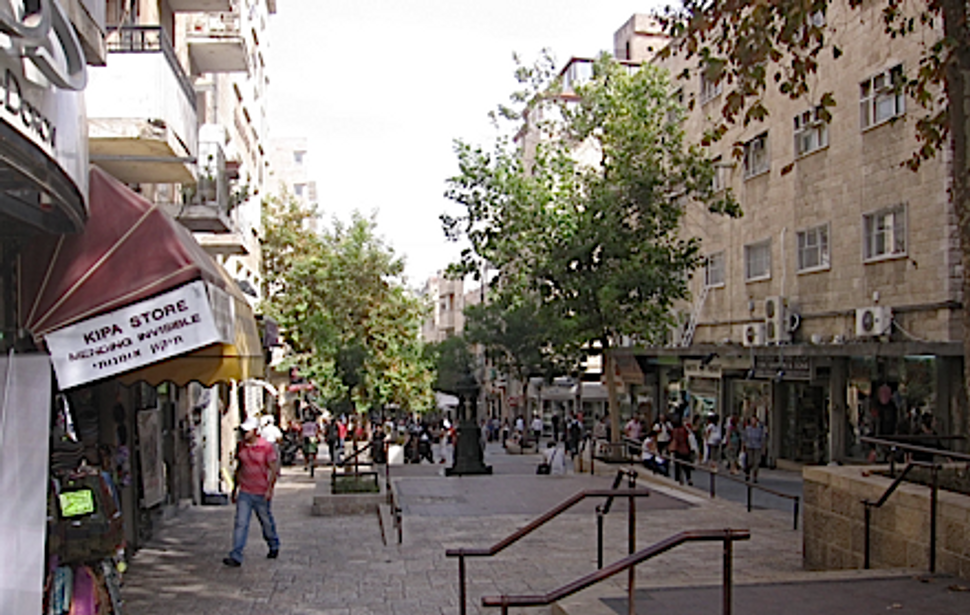 A Festival for the Feet: Halprin turned Ben Yehuda street in Jerusalem into a pedestrian mall. Image by wikimedia commons

In tough economic times, parents may think twice about splashing out on a once-in-a-lifetime spectacular bar mitzvah voyage. But “A Life Spent Changing Places,” a posthumously published memoir by the American Jewish landscape designer Lawrence Halprin, who died in 2009 at age 93, offers justification for wild splurging. 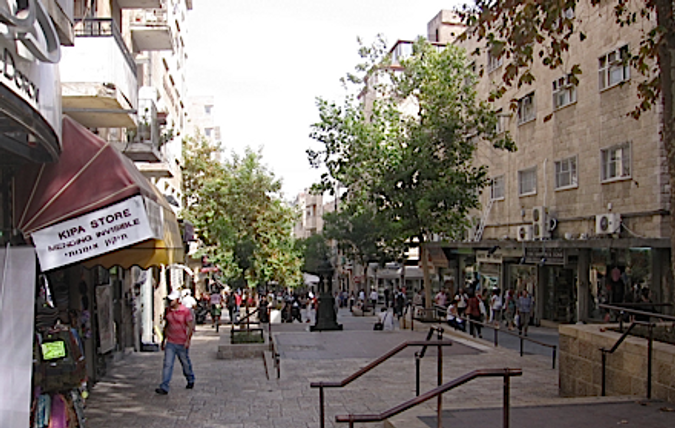 A Festival for the Feet: Halprin turned Ben Yehuda street in Jerusalem into a pedestrian mall. Image by wikimedia commons

When the Bronx-born and Brooklyn-raised Halprin’s 13th birthday approached, his parents and he set out on a costly one-year family grand tour. His mother was Rose Luria Halprin — Hadassah founding president Henrietta Szold’s handpicked choice as successor — so as well as touring Europe they toured the Holy Land, culminating in Lawrence’s bar mitzvah in Jerusalem. Great European art and architecture dazzled young Halprin during the family trip, blending with a fascination for Jerusalem and for kibbutz life. The momentous trip’s timing might not seem ideal in retrospect: Almost immediately after the Halprins returned to New York, in October 1929, the stock market crashed and the family’s savings were wiped out. Yet Lawrence Halprin had his lifelong memories, and these early images became integral to his later artistry.

Any visitor to Israel inevitably moves through Halprin-designed spaces, such as the Hadassah Medical Center’s gardens, the Hebrew University of Jerusalem’s campus at Givat Ram, the Ben Yehuda Street pedestrian mall, and the Haas and Goldman promenades overlooking Jerusalem. His work exudes a sparse, spare, desert rock aesthetic, in which the beauty of mountainous parched landscapes is echoed closely in arrangements of space that seem utterly natural. One of Halprin’s great design qualities is an innate modesty reflected in the very title of his memoir, which does not specify if the places were changed for the better — as indeed they were.

The same approach can be identified in Halprin’s work far from Israel, in such places as Seattle’s Freeway Park, the Franklin Delano Roosevelt Memorial in Washington, D.C., and early planning for Taube Koret Campus for Jewish Life, in Palo Alto, Calif. These ambitiously high-profile projects, too, are marked by a design inspiration based on memories of 1929 walks through the Old City of Jerusalem with a 12-year-old friend, Yigael Sukenik, who later adopted the name Yadin and became a noted Israeli archaeologist and, even later, chief of staff of the Israel Defense Forces. The throbbing activity of people through Old City streets and the animated life of the shuk, the outdoor marketplace, transfixed young Halprin as a “wonderful piece of theater.” As he recalled in “A Life Spent Changing Places”: “There was a cacophony of life all around… I suddenly [decided to] think about and approach design in a whole new way — a way that could include a combination of many art forms, multidimensional movement through space, sound, texture, and all forms of human activity.”

The mindset of considering landscape design as a set through which people in motion pass was further ingrained after a 1939 encounter at the Hillel at University of Wisconsin, when Halprin was on campus, studying horticulture. One spring evening, Halprin attended a lecture there by Rabbi Max Kadushin, author of “The Rabbinic Mind” and “Organic Thinking.” Kadushin’s lecture topic was the sufferings of German Jews under Nazism, hardly a subject propitious for romance, yet Halprin’s eyes wandered to an attractive young dance student, Anna Schuman, and a year or so later they were married.

As viewers of the 2009 documentary “Breath Made Visible” know, Anna Schuman Halprin, now 91, has spent a lifetime working on the concept of dance as healing. Undoubtedly this definition informed her husband’s designs, as “Where the Revolution Began: Lawrence Halprin and Anna Halprin and the Reinvention of Public Space,” a 2009 book of essays from Spacemaker Press, makes explicit. The people moving through Halprin’s landscape designs are not merely getting to one place from another; they are treated to a restorative experience.

Freeway Park, built in 1976 above an interstate highway and a municipal parking lot, is surely less than pastoral. Yet, water gushing over stones was intended to drown out traffic noise, belying the label of “brutalist” architecture that some critics misapplied to this project. While other architects of the time, especially Paul Rudolph, were genuinely brutalist in their designs, Halprin reflected more of a sabra ethos, referring to the Hebrew word for a thorny desert plant with a sweet interior, adopted to describe Jews born in Israel. As his daughter Rana told one obituary writer after her father’s death, Halprin was a “kibbutznik at heart,” and his visits as a teenager to Kibbutz Mishmar HaEmek in the western Jezreel Valley made a lifelong impression. He noted: “I enjoyed the strong social quality of living together without aggressive competitiveness.”

This healing live-and-let-live-ethos is further reflected in the 1.5-mile walkway that Halprin designed sometime around 1980. The walkway overlooks the Old City of Jerusalem and is known locally as the Tayelet. Comprising the Walter and Elise Haas, Gabriel Sherover and Richard and Rhoda Goldman promenades, the arrangement of pathway stones lovingly frames the visitor’s view of the city, transcending its intermittent identity as a scene of tragic strife. Although more recently placed, these stones reflect the more venerable ones in Jerusalem’s city center, especially the Western Wall. Humanizing Jerusalem’s cacophonous urban experience was no easy task, and fortunately Halprin had Jerusalem mayor Teddy Kollek, a longtime friend of Rose Luria Halprin, on his side. Even so, at the end of the 1960s, when Halprin proposed a pedestrian promenade for Ben Yehuda Street, he and Kollek had to face the outraged fury of Jerusalem taxi drivers who were convinced that the project would destroy their livelihoods. Nothing of the sort occurred, and Ben Yehuda Street became a lively arts venue as well as a rare breath of automobile-free urban existence in the city.

Ultimately, readers of “A Life Spent Changing Places” get the impression that Halprin’s Zionist feelings were so strong that in 1948, after the declaration of Israel’s statehood, Halprin might have made aliyah had his wife and daughters not been firmly entrenched in America’s West Coast, where they have remained. Wholly American himself in education and attitudes, Halprin hit upon a compromise: “I decided that I needed to somehow maintain a relationship with Israel through my profession. In that way I hoped I could contribute, in a vital way, to the building of the utopian state.”

Halprin remained true to this covenant, inspiring younger landscape architects such as Israel’s now eminent Shlomo Aronson, who got his start working at Halprin’s San Francisco office between 1963 and 1965. In 2009, Anna Halprin told j. the Jewish News Weekly of Northern California that her late husband’s “personality and his thinking were totally shaped by his Jewishness, and his Jewishness was reflected in so many subtle ways in his life and work.” Toward the end of his life, when Halprin became somewhat disoriented with English-speaking visitors, Anna noticed that he “became totally lucid in Hebrew… so I would get as many people as I could who spoke conversational Hebrew to visit him.” Never underestimate the lasting importance of a bar mitzvah trip.

An American Landscape Architect and His Sabra Designs