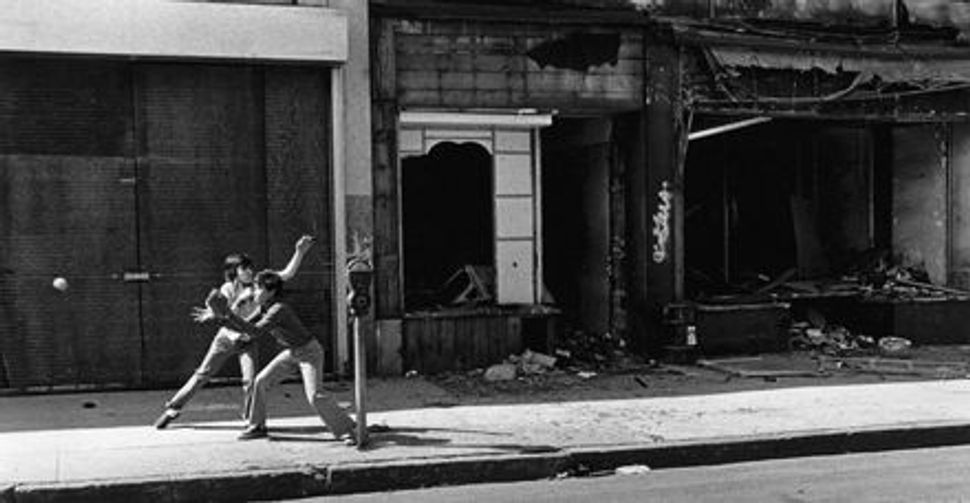 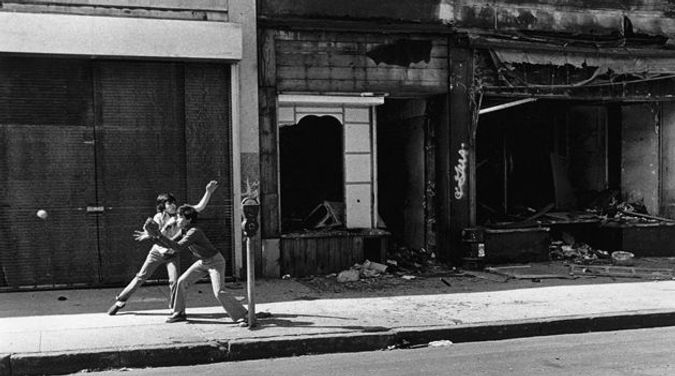 Jewish Take: Mel Rosenthal gave up a career in academe to become a photographer. Here?s a shot he took in the South Bronx. Image by courtesy mel rosenthal

More than a decade ago, William Klein claimed that there are two kinds of photographers: “Jewish and goyish.” He said that if you look at modern photography, you find, “on the one hand, the Weegees, the Diane Arbuses, the Robert Franks — funky photographers. And then you have people who go out in the woods. Ansel Adams, Weston.” It’s tempting to see the generous and imaginative essays of Daniel Morris’s “After Weegee: Essays on Contemporary Jewish American Photographers” as a kind of academic restatement of Klein’s last-drinks bravado, as an argument that yes, Virginia, there is a Jewish photography.

For Morris, American Jewish photography after World War II is essentially documentary and its strategies stem from the work of both Weegee (born Arthur Fellig, the son of a rabbi) and the leftist, mostly Jewish Photo League (the subject of “The Radical Camera,” a new exhibition at The Jewish Museum New York). Morris, who teaches English at Purdue University, locates this Jewish photography in the books and photojournalistic projects of Arbus, Lee Friedlander, Bruce Davidson, Jim Goldberg, Mel Rosenthal, Tyagan Miller and Marc Asnin. More surprising, he traces it to the works of Annie Leibovitz and Allen Ginsberg. He doesn’t go as far as to say that this photography is funkier. He doesn’t say it’s better than the other team’s. He just argues that it’s distinctive and it’s Jewish.

Put this way, it looks like Morris has left himself open to all the predictable complaints of oversight and omission. To concentrate on what Morris misses is to miss, in turn, what he is up to. To be sure, “After Weegee” wants to recover a rich vein of Jewish photography. But more important, it is making strong claims for the value of the medium. It launches a markedly Jewish, adamantly secular defense of photojournalism against one of photojournalism’s most formidable critics.

Although her name comes up only late in the book, Susan Sontag is the grand antagonist of “After Weegee.” Three and a half decades ago she mounted a sustained attack on photography by turning excellent local insights into sweeping global judgments. This sleight-of-words lent her glittering aphorisms a kind of mandarin finality:

To take a picture is to have an interest in things as they are, in the status quo remaining unchanged (at least for as long as it takes to get a “good” picture), to be in complicity with whatever makes a subject interesting, worth photographing — including, when that is the interest, another person’s pain or misfortune.

Her indictment covers all the bases. Photography is a form of aggressive appropriation and a form of passive complicity. It makes things too distant and brings them too close. It gives us mere surfaces and provides at best a kind of pseudo-knowledge devoid of context and explanation. Photography lacks the rationality of argument, the explanatory power of narrative.

“After Weegee” argues that Sontag is wrong. Morris makes much of the fact that most photojournalism appears in books. As he points out, many of these books intercut words with pictures, and where they don’t, they usually provide captions (like Weegee’s famous caption, “I cried when I took this picture,” in “Naked City,”). More to the point, they lay out photographs one after the other. This suggests a narrative. Even if the reader insists on jumping around between pages, the collection provides a context, a series of echoes and contrasts. Morris sees a model for this in “Naked City,” whose juxtaposition of photographs and hard-boiled one-liners provides a sophisticated indictment of inequality. He traces the way photographers like Goldberg and Rosenthal and, most tellingly, Sontag’s longtime partner, Leibovitz, sustain arguments across the supposed muteness of images.

For Morris, every picture tells a story because it is placed in a web of implication. The photojournalists he covers do not let their pictures drift. And because their subjects are social and political, their implications are both political and ethical. Morris sees these photographers’ identification with the urban poor as a secularized but nevertheless Jewish demand for justice. He can do this in part because the specific photographers he writes about do so. Despite what Sontag might claim, these guys do not have an interest in the status quo. They are interested — as secular Jews — in changing it.

The photographers whom Morris discusses demonstrate their Yiddishkeit in still another way. Morris argues in several places that their documentary impulse follows the biblical injunction to remember. These photographers are witnesses and recorders. In a very real and basic way, their photo essays serve as Yizkor books.

Morris’s emphasis on photographers’ intentions counters Sontag’s habit of assuming that photographers are responsible for the uses to which others might put their work. In fact, the emphasis in “After Weegee” on the photographer’s goodwill complements filmmaker Errol Morris’s recent “Believing Is Seeing” (Penguin Group, USA), a contradictory and sometimes tendentious book that does not seem to have outgrown the blogs from which it sprang. For all its flaws, though, “Believing Is Seeing” keeps showing that while photographs can be put to all sorts of suspect uses, this has nothing to do with the photographers themselves.

“After Weegee” serves as a fine complement to Susie Linfield’s passionate defense of photojournalism, “The Cruel Radiance: Photography and Political Violence,” which came out last year from the University of Chicago Press. Against Sontag’s claim that photography is complicit in the world it portrays, Linfield, who teaches journalism at New York University, argues (with a brio that owes a lot to Sontag) that “every image of suffering says not only, ‘This is so,’ but also, by implication: ‘This must stop.’” To a degree, this imperative is independent of the photographer’s intention. As Linfield demonstrates, the casual snaps that Nazis took of their own atrocities can condemn those atrocities most profoundly. What matters is how we look at photographs, how we react to them, how we put them to use. “Photojournalists,” she writes, “are responsible for the ethics of showing, but we are responsible for the ethics of seeing.”

That is the key. Such an ethics would entail not only the good habits of reading and looking, such as Morris exhibits time and time again, but also the willingness to own up to our feelings of fear, pity, helplessness and disgust. At a critical point in her book “On Photography,” Sontag tells the story of the first time she saw pictures of the Shoah. It was July 1945, and she was 12. Her reaction explains much of the animus that drives “On Photography.” Sontag felt incapacitating grief once she saw those pictures. She expresses her resentment:

She says that the photos of the Shoah hurt her to the moral quick, but they also hardened her. So she goes on to accuse photography of shutting down compassion, because we defend against our helplessness by becoming cold. But whose fault is that? As Linfield argues, pictures make claims upon us, and it is a sign of our ethical inadequacy if we can’t stand up to those claims.

To argue that we shouldn’t have to look at what we cannot change is psychologically telling, but morally perverse. Morris and Linfield won’t have it. Taken together, their books suggest that there is not only a Jewish way of taking photographs, but also a normatively Jewish way of looking at them. For sure, they place a high demand on both the photographer and the viewer. But that is their polemical — and ultimately necessary — point.