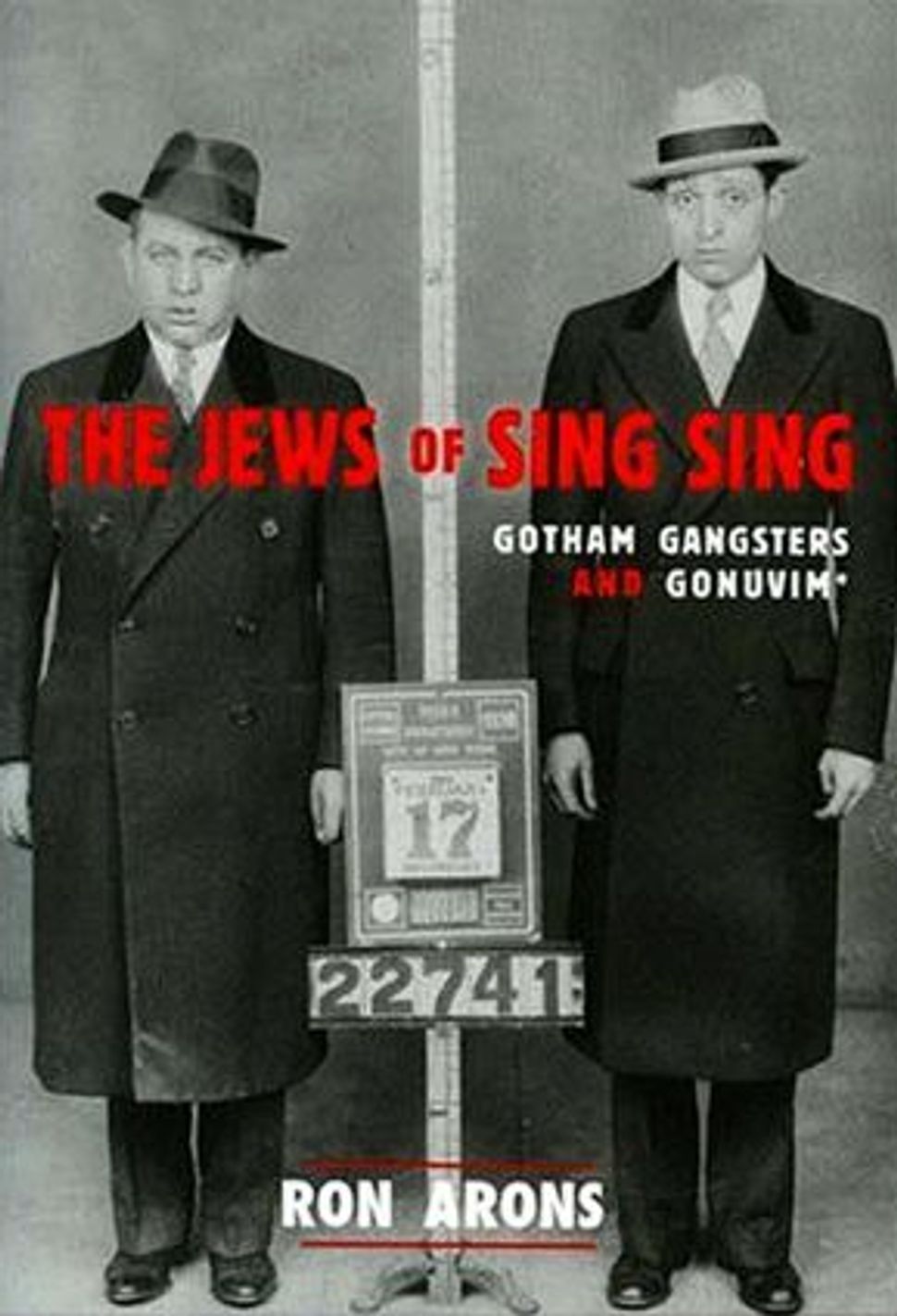 The Jews of Sing Sing: Gotham Gangsters and Gonuvim 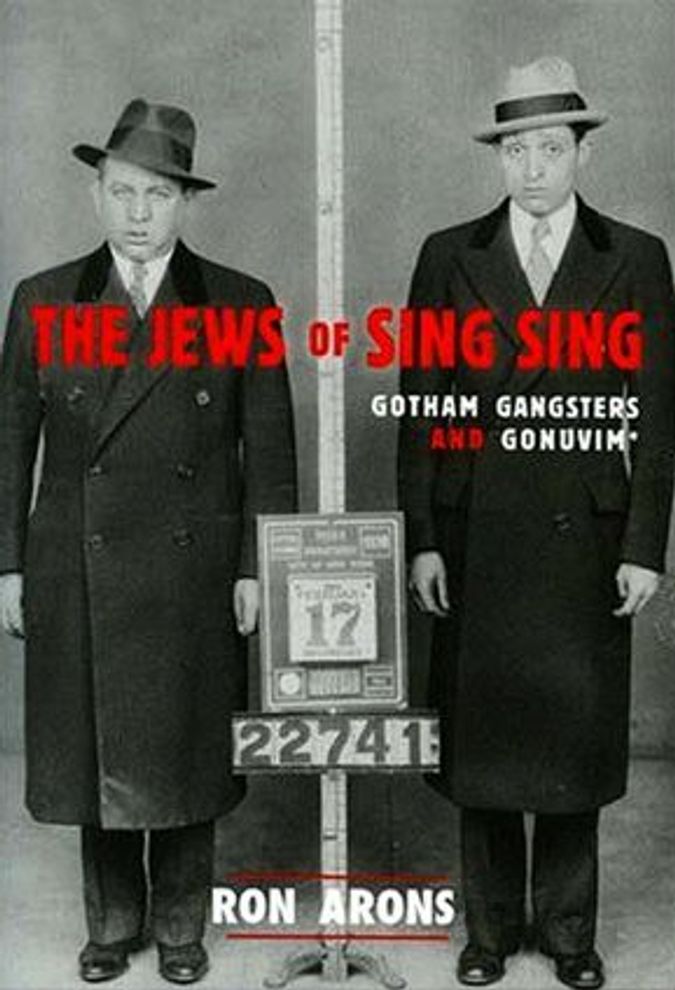 Sometimes it’s the little, everyday things that help you understand the big picture.

You want to know what life was like as a Jewish gangster in 20th-century America? Ron Arons’s disjointed yet informative book, “The Jews of Sing Sing,” offers plenty of insights. But the best may be an anecdotal aside in a rambling chapter on Louis Shomberg, one of the heavy-hitters profiled by Arons in a book built around his personal search for information about a great-grandfather who, like Shomberg and many other “name” gangsters, spent some time in The Big House.

In 1934, Arons writes, Shomberg threw a “lavish golden anniversary party for his parents, Abraham and Rebecca.” At that point, the gangster to whom some affectionately referred as “Papa Louie” was on the rise, a major player in The Syndicate. His contemporaries and business associates, who ruled various private domains from Brooklyn to Newark to his own Lower East Side of Manhattan, included Meyer Lansky, Frank Costello, Joe Adonis, Abner “Longie” Zwillman, Johnnie Torrio, Charles “Lucky” Luciano and Benjamin “Bugsy” Siegel. Bugsy’s murder years later, Arons writes, was set in motion by Lansky, his partner and childhood friend, and carried out by Shomberg. But that’s getting ahead of the story.

For the golden anniversary party of his immigrant parents, Shomberg spared no expense. The fête took place at the Broadway Central Hotel, at the time one of the biggest and best in New York City. There were two separate orchestras playing dance music, and a special performance by the Cotton Club Revue. (Arons suggests that, among other things, Shomberg was the hidden owner of Harlem’s famous Cotton Club at the time, which would explain his ability to book the revue for his affair.)

But here’s what really tells the story of a gangster’s life: “Before being admitted to the party,” Arons noted, “all guests, including family members, were frisked to make sure they parted with any concealed weapons.” A separate room, he said, was set aside for storing the hardware, which, presumably, was returned after the affair.

Arons’s book is built around extensive research and includes some fascinating factoids culled from prison and court records, though the story lacks a narrative thread and often bogs down in the telling. A central theme that drives the book, not always successfully, is the story of Arons’s own great-grandfather, Isaac Spier, a minor character at the fringes of the pre-World War I New York underworld who lived on as a somewhat mysterious figure in his family’s memory.

Spier spent time in Sing Sing following a conviction for bigamy in 1897. Arons’s dogged research led him to an actual transcript of a court hearing from that case, in which both of Spier’s wives testified against him. Faced with a slam-dunk prosecution, Spier ultimately pleaded guilty and was sentenced to four years. Bigamy, Arons notes, was an occurrence not uncommon in the chaotic, hardscrabble world of the Eastern and Southern European immigrants who poured in, wave after wave, to the Lower East Side and similar neighborhoods in the late 19th and early 20th centuries.

Spier, his great-grandson would go on to learn, had additional brushes with the law, involving allegations of abandonment, forgery, larceny and extortion. But he was at best a bit player moving around the fringes of an underworld dominated by the likes of Edward “Monk” Eastman, Benjamin “Dopey Benny” Fein, Louis “Lepke” Buchalter, Irving “Waxey Gordon” Wexler and Shomberg.

Arons’s work documenting the activities, and the backgrounds, of the players — including his great-grandfather — was no easy task. Records were often incomplete and in some cases contradictory. And family histories often swept tales of an outlaw father, uncle or brother under the rug. Eastman, for example, is considered by many to be the godfather of all Jewish gangsters. But, Arons points out, there is some question about whether Monk was, in fact, Jewish.

Antisemitism, not surprisingly, also played a role in some of the investigations and law enforcement crusades. Arons points that out, but to his credit, he does not try to sugarcoat the lives and times of some of the more brutal Jewish gangsters about whom he writes.

He also puts the lie to the stereotypical perception that Jews were the “brains” but that other ethnic groups supplied the “brawn” in underworld matters. Consider, for example, Harry “Gyp the Blood” Horowitz. The nickname came from his dark complexion — Gyp as in gypsy — and his penchant for violence. “Rumor had it that he boasted about his ability to break a man’s spine with his bare hands,” Arons writes of Horowitz, an enforcer for gangs in the Bowery at the end of the 19th century. “Legend suggests more: that he picked on innocent bystanders and ‘practiced’ to maintain his prowess.”

Arons’s book is a tale filled with gambling, extortion, prostitution, head-busting for organized labor and/or anti-union employers, and getting out or discouraging the vote at the behest of Tammany Hall. These were the trades where many of these wise guys made their bones. Others in his book were not career criminals but incidental figures, like his grandfather, scoundrels and unfortunates who landed behind bars for crimes of passion or impulse.

In the end, however, it was rum-running and the related, lucrative rackets and connections growing out of Prohibition that turned their thuggery into a highly lucrative multimillion dollar business and the stuff of legend. Arons offers glimpses into that world. But his Joe Friday — “Just the facts” — style of writing lends itself more to demonstrating how well he researched his story than to showing how well he could tell it.

The potential here was “The Gangs of New York” meets “Crossing Delancey,” but it is a potential that goes largely unfulfilled.

George Anastasia is a reporter for The Philadelphia Inquirer and the author of several books on organized crime.