A New Take on ‘Old Days’ 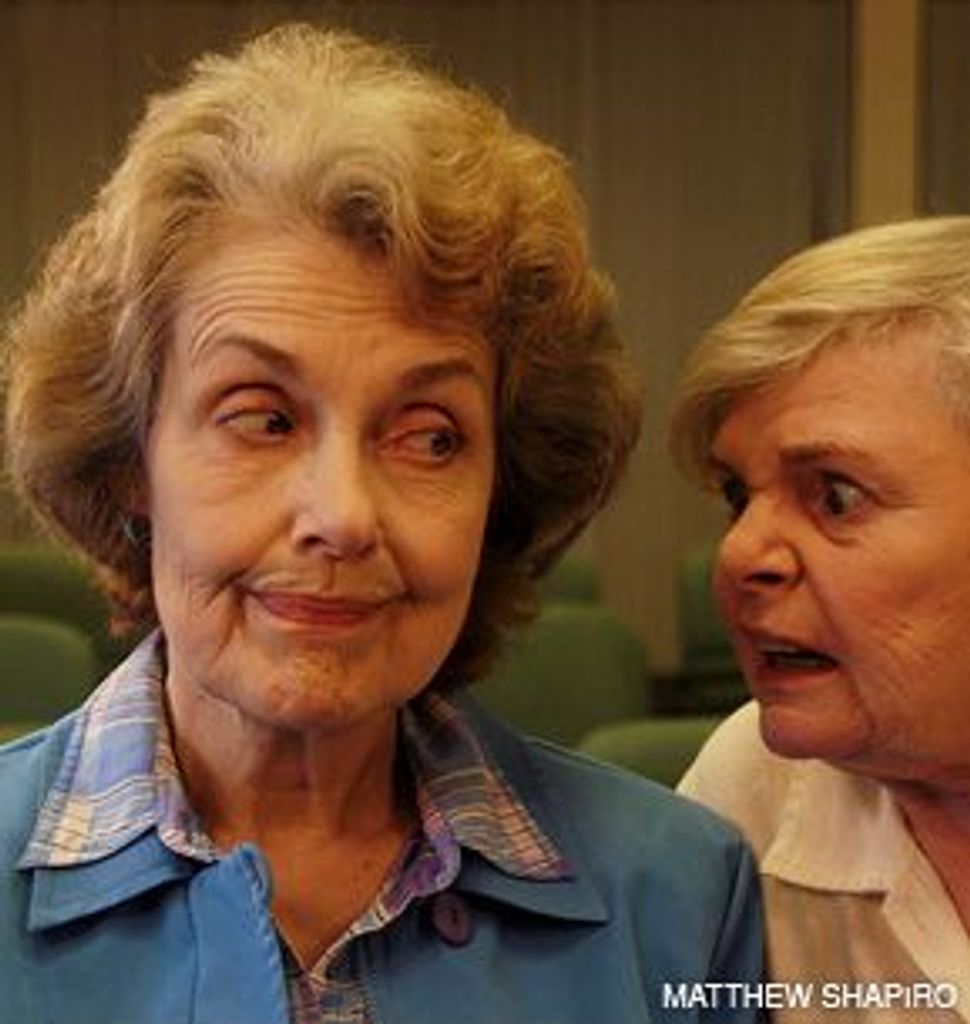 WATCH MY LIPS: Lillian (Mary Beth Peil) does not voice her disapproval of Gertrude (June Squibb) and her voice in ?Old Days.?

Retirees like to go to the movies, but you wouldn’t know it from the offerings at the local Cineplex. 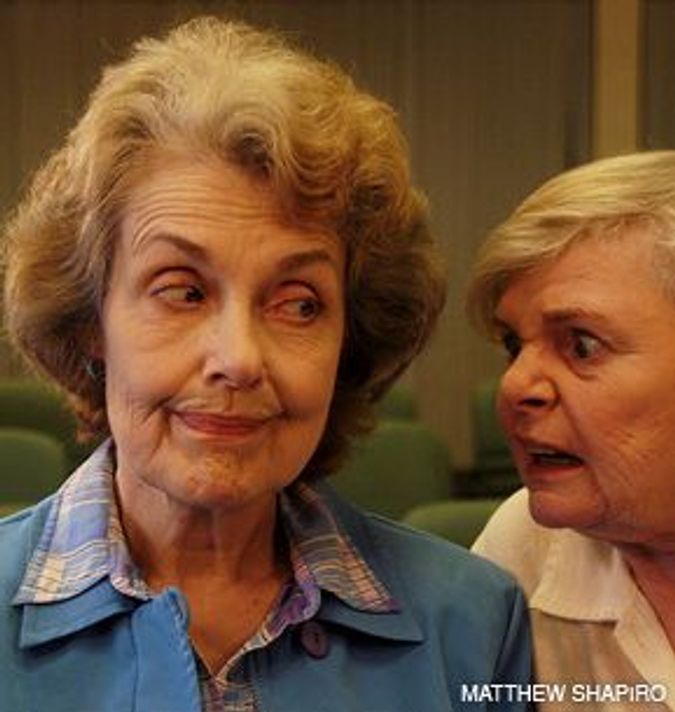 WATCH MY LIPS: Lillian (Mary Beth Peil) does not voice her disapproval of Gertrude (June Squibb) and her voice in ?Old Days.?

Hollywood continues to aim hits like “The Dark Knight” and “Iron Man” at the desirable 15 to 35 age group, without giving much thought to mature audiences. While older moviegoers still may enjoy an action flick or two, there are few films on general release that speak directly to them. This narrow focus flies in the face of demographic trends, with the number of senior citizens in the United States expected to more than double between 2000 and 2030.

Like any other moviegoer, retirees relate to films about people who resemble themselves. After all, they still feel happy and still get lonely, and still love and hate. Film has barely scratched the surface of emotions in this demographic.

A short film now playing the festival circuit is working to put this older generation on the cinematic map. The movie, “Old Days,” is set in a retirement home with a decidedly Jewish feel, and will next play at the Big Apple Film Festival in New York on November 22 (www.bigapplefilmfestival.com). It’s a coming-of-age story of sorts about a 74-year-old woman, Lillian, who moves into a retirement community after her husband’s death. Like the new girl in school, Lillian struggles to make friends, fend off bullies and find romance, which in this case comes in the form of a middle-aged divorcé who has been singing at the retirement home for as long as anyone can remember.

Matthew Shapiro, who directed, produced and co-wrote (with Daniel Kitrosser) “Old Days,” sought to create a film that cast the spotlight on the older population.

“Usually, when elderly characters make an appearance in a film, they are either wise old sages or crazy old coots,” he said. “I wanted to tell a story that explored aging characters in all their complexity.”

For both the lead and supporting roles, Shapiro chose a cast of veteran New York character actors who have been performing in film and theater for decades. “To me, these actors tend to be much more interesting than the younger movie stars from whom they regularly steal scenes,” he said.

The film’s lead actors exude star power, defying stereotypes in the process: The leading lady is over 70, and the leading man is stout and balding. Mary Beth Peil, who made a name for herself starring on Broadway in “The King and I” but is probably best known as Grams from the WB teen drama “Dawson’s Creek,” plays Lillian. Within the first few minutes of the film, Lillian’s age becomes unimportant, though her lined face and sad eyes linger in the viewer’s memory long after the movie ends.

Rounding out the cast are such notables as June Squibb, who played opposite Jack Nicholson in “About Schmidt”; Sylvia Kauders, the original off-Broadway bubbe in the Jewish Repertory Theater’s 1985 production of “Crossing Delancey,” and Helen Hanft, from the classic 1987 film “Moonstruck.” And in a reversal of the usual casting, a beautiful young actress has only a brief character role in a film about the complex relationships of older folk: Sarah Steele, best known for playing the daughter of Adam Sandler’s character in “Spanglish,” plays a bored-stiff waitress in the retirement home’s dining room.

A number of recent films have dealt with old age, but offerings like “Away From Her” and “The Bucket List” didn’t strike quite the right note. Because of its contrived plot and poorly developed characters, the latter was widely acknowledged as fluff, and it did little to make use of the considerable talents of its two leading men, Jack Nicholson and Morgan Freeman. Although the former, to its credit, evocatively depicted an aging couple’s relationship, it left the bleak impression that old age amounts to Alzheimer’s disease if you’re lucky and bad memories if you’re not.

“Old Days” is compelling because its subject, the Jewish retirement home, has received scant attention in film, and because its tone lies somewhere between the extremes of “Away From Her” and “The Bucket List.” This past June, the film played in Hollywood, Calif., at the Directors Guild of America. The audience laughed when Sylvia, the retirement home’s resident queen bee, berated a proud grandma for bragging about her family, and there were gasps when Sylvia’s clique excluded Lillian from their bridge game.

The clique follows Sylvia around devotedly throughout, transforming into a hysterical blur of whispers and slanting eyes whenever they see Lillian approaching Louis, played by Brad Oscar. The originator of the role of Nazi playwright Franz Liebkind in the Broadway musical “The Producers,” Oscar carries off Louis like a seasoned romantic lead, bald head and all.

“You know, she’s always with him,” one clique member gossips in true “Mean Girls” fashion. “Every time he comes. Picking up Louis, it’s ridiculous.”

At the same time, the film gracefully acknowledges the gravity of growing older and the potential it holds for loneliness. In one of the most touching scenes, Lillian breaks down, clutching a picture of her late husband to her chest, bringing into focus what had only been hinted at before: Lillian is interested in Louis because of his resemblance to her husband.

Lillian’s experience emphasizes that even though the film is about senior citizens, a person of any age can relate to being excluded by a clique or to suffering the death of a loved one.

“From young children fighting for their place in the sandbox, to teenagers navigating the complex world of high-school cliques, to adults trying to climb the corporate ladder, we’re constantly searching for a niche,” Shapiro said. “It’s just intensified in a retirement community when strong personalities have to learn to live with each other under one roof.”

To outsiders, retirement homes may seem like dull places where the crotchety and simple-minded live out their final years, but such recent books as “Fabulous Small Jews” by Joseph Epstein and “Early Bird” by Rodney Rothman certainly have portrayed the intricacies found in these places where so many life experiences are brought together. American audiences are ripe to see the same thing play out on screen.

That’s what makes “Old Days” a new take on the coming-of-age story.

Jennie Morgan is a writer and a recent graduate of Columbia University.

A New Take on ‘Old Days’