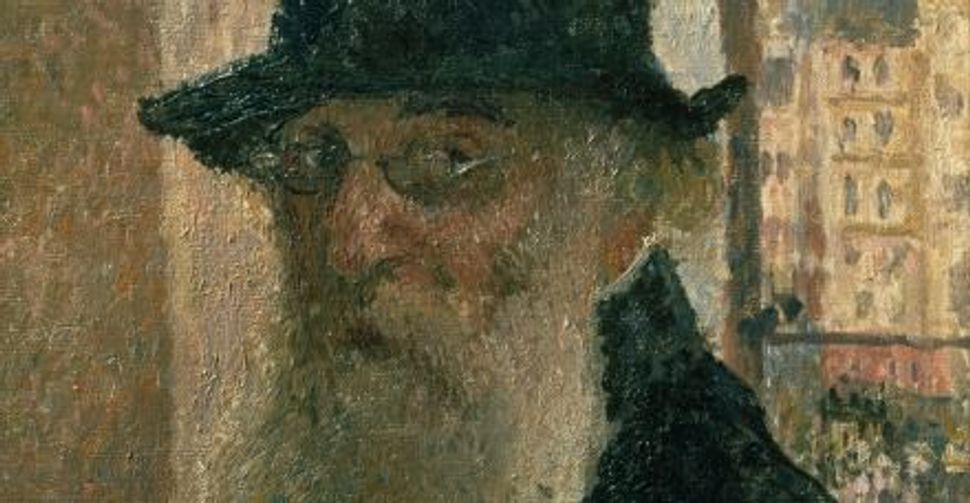 Renowned as an Impressionist painter of landscapes, less widely known as a Jew and an anarchist, Camille Pissarro (1830 –1903) made his debut as a figure painter in 1882. Almost 140 years later, his splendid portraits of French peasants, outdoor market crowds, domestic servants and his own family can be seen at San Francisco’s Legion of Honor through January 2012. Previously displayed only in Massachusetts, at the Sterling and Francine Clark Art Institute, the show, titled “Pissarro’s People,” uncovers neglected aspects of the artist’s life and paintings. 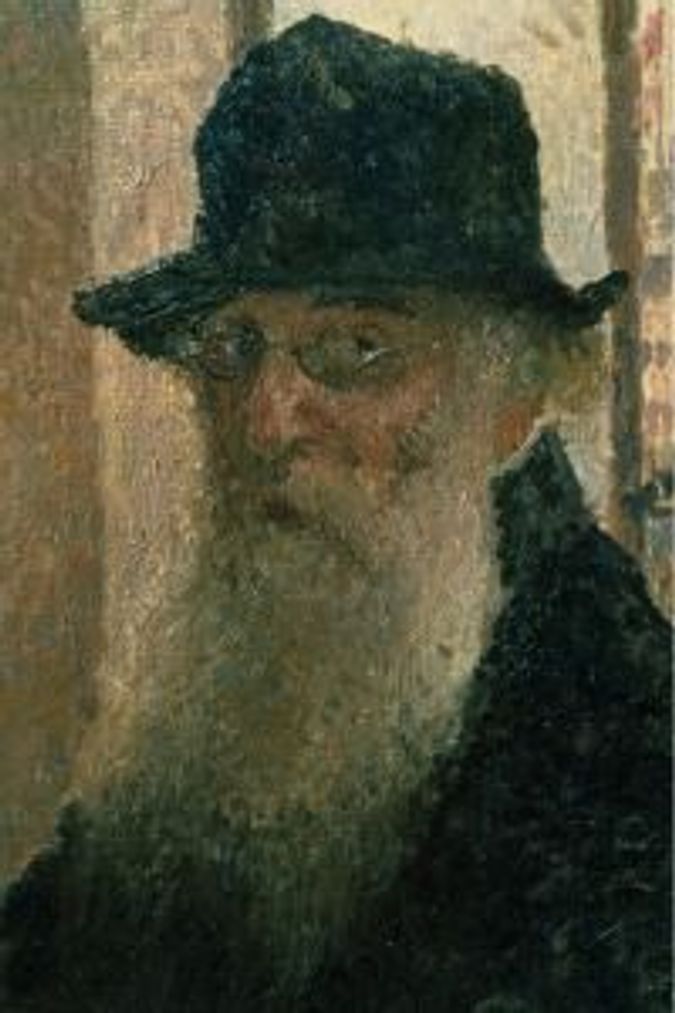 The only Caribbean-born secular Jewish anarchist to become a French Impressionist, Pissarro portrayed several different groups of people. These can be seen in the new exhibit, as viewers start at a gallery of relatives — wife, children, close friends — and walk into a room showing 19th-century French domestic servants who sweep and wash.

A stroll into the next room reveals the great outdoors: On canvases, peasant women gather green grass, apples and hay. In another room, we see marketplaces overflowing with food sellers and buyers. The final hall holds what might be called a gallery of utopians: Field workers harvest apples, potatoes and hay under light so golden and serene, it looks like the millennium has arrived. Finally, a small alcove holds three rare self-portraits of the artist, whose long white beard might be worn by a Hasidic rabbi — but he also wears a French beret.

In a superb catalog study of Pissarro, curator Richard Brettell finds new evidence of the impact that Judaism and French politics had on the artist. Previous scholars “assumed that the painter quickly outgrew and discarded his Jewish childhood, making it irrelevant to his artistic production,” Brettell writes. But a thorough study of Pissarro’s correspondence suggests that “his extended Jewish family — his personal diaspora, if you will — was a core part of his identity throughout his life.”

The artist’s relatives lived in Haiti, Saint Thomas (where Pissarro was born), Montevideo, Paris, London and Minneapolis, and ties to close and distant family remained important to Pissarro. He experienced Paris “always as a Jew and a foreigner,” Brettell notes; but the artist was not isolated there or elsewhere, insofar as he stayed in contact with many relatives, including his “classic ‘Jewish mother,’” who lived to be 94.

The new exhibit’s emphasis on figurative painting offers a more inclusive representation of the people who constitute Pissarro’s personal diaspora. Besides his relatives, the artist’s broader family could be said to include housemaids, apple pickers, grass gatherers and other laborers who populate the paintings. By choosing them as subjects, Pissarro conferred a new equality on the figures and brought them into his world. Some of the domestics portrayed were literally family, because lack of funds to pay models led the struggling artist to have his niece pose as a housemaid in one painting and as a dishwasher in another. In still another portrait, his wife works as a seamstress.

While Pissarro found beauty and dignity in his humble subjects, they were not always well received. A Parisian journal suggested that his sympathetic portrait of a peasant sipping café au lait was laid (or ugly, in a French pun on “lait”), as if the lower-class woman did not merit the artist’s attention. Out of the three large portraits of rural peasant women Pissarro completed in 1874, only one sold during his lifetime. Today, almost any painting by him would cost a fortune, if you could find one for sale.

Pissarro’s anarchist belief in free association of individuals who are equal led him to give peasants and rural domestics sensitive artistic representation in his portraits at a time when other Impressionists were painting wealthy and fashionably dressed Parisians and ballet dancers, and boating party luncheons. As Joachim Pissarro, an art historian in New York and great-grandson of the painter, said in a symposium at the exhibit’s opening, Pissarro sought to “get rid of any sense of hierarchy in his subject matter.”

Father of eight children, Pissarro was a family man and taught his children to paint. We know the family spent time with him, since Pissarro’s portraits required wife and children to sit for hours, holding flowers or reading while he painted their likeness. One 1893 oil canvas of the artist’s son Felix, painted at a time when police surveillance required discreet reference to radical political leanings, pays tribute to anarchist literature as well as to Felix by showing the young man reading a small, red-covered book, quite possibly an anarchist publication his father asked him to hold for a few hours.

Pissarro subtly conveyed anarchist and secular Jewish support for the underclass through visual celebrations of its work and leisure. His cheerful, affirmative sequence depicting small-town marketplaces renders the sellers of produce and the market crowds inviting — full of vitality, color and camaraderie. The anarchist may not have endorsed all aspects of the market economy, but his bustling scenes show small-profit, small-town exchanges where people freely associated, in a favorable light.

A number of Pissarro’s masterful portraits of market sellers and field laborers leave visible thousands of tiny, precise brushstrokes; small, energetic swirls, and pointillist dots of paint. Minuscule ridges of light and shade give the canvas a pulsating surface. Such techniques confer a vibrancy on scenes of physical labor in which harvesters bend and lift with dancelike poise amid their crops. Perhaps overidealized at times in a glow of sunlight, his harvesters seem to work at their own pace, on a fertile, utopian landscape, without any overseer.

A photograph from 1895 shows the white-bearded artist pushing a specially built easel-on-wheels through a field; the wheels allowed Pissarro to move with rapidity through his outdoor “studio,” the naturally lit world, in search of people as well as landscapes. He was a field worker himself, just painting apple pickers instead of picking apples.

“Pissarro’s People” includes in one special room a series of highly charged political drawings rarely exhibited before. “Les Turpitudes Sociales” (“Social Disgraces”), 30 pen-and-ink drawings, was first created in 1889 to provide the artist’s nieces with an education in the “social disgraces” of capitalism. In “The Beggar,” a hungry father holds out his hat for alms, accompanied by his son in a similar pose, while a butcher shop window full of food can be seen behind father and son. Three elderly women, described as “dabblers in the stock market,” appear out of place as they confer near a group of businessmen wearing top hats. “Capital,” an unflattering 1889 portrait of a banker clutching his moneybag, might appeal to the current generation of protesters occupying Wall Street.

The images of distress culminate in “Insurrection,” a scene where guns blaze near a pile of corpses and the rebellion recalls the ill-fated Paris Commune of 1871. Comparable to the satiric drawings of Daumier and Goya, this series of pictures, with ironic captions by Pissarro, wryly portrays the stock market wealth and lower-class poverty.

His small drawings of desperate characters contrast sharply with the larger celebratory canvases in which Pissarro pays homage to life in the fields and rural marketplaces. While he always remained a Jew and a foreigner in Paris — indeed, he reported seeing a frightening anti-Semitic mob there during the Dreyfus Affair — in the countryside, Pissarro lived in harmony with the community around him as he painted it.

In Paris, though, his personal diaspora arrived in force at Impressionist exhibitions. Although not always initially welcome there, his portraits of family and laborers ended up staying in many museums as part of Pissarro’s marvelously accomplished art. And with the prices they now fetch, they are having the last laugh at the bankers and snobs.

Joel Schechter is professor of theater arts at San Francisco State University and writes a column for Jewish Currents.