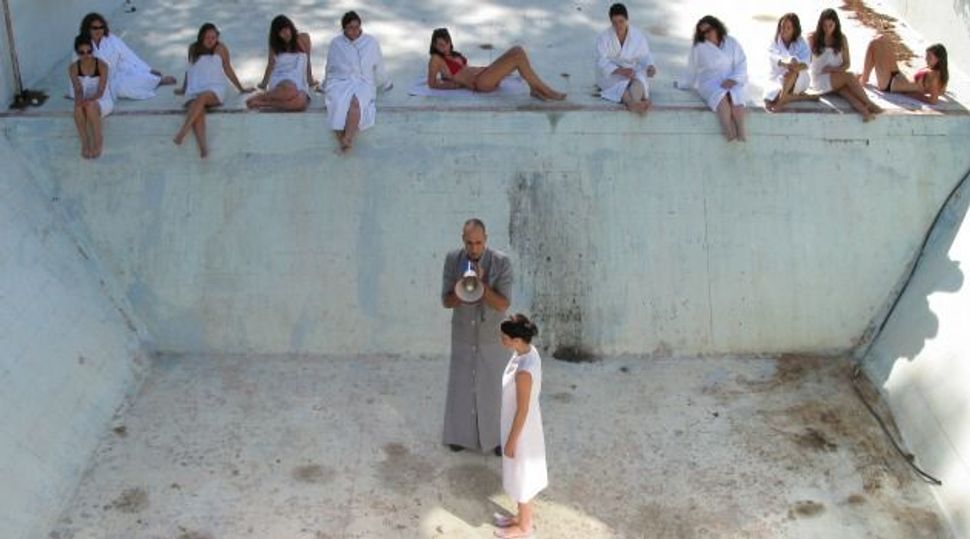 No Writers Need Apply: This video installation was funded by Six Points, which offers fellowships in arts, but not for writers like Gordon Haber Image by courtesy of six points

‘Oh, Time, Strength, Cash, and Patience!” wrote Herman Melville in “Moby Dick.” In other words, writing is an endurance test, and it can drive you mad. And if it was problematic for him, imagine how the rest of us feel.

Unlike whaling, this is something I understand from experience. I’m no Melville, but I have been working on a novel for four years — that’s in between freelance writing, teaching and procreating. Despite all these worthy distractions, I’m on my third draft, and if I could just find a way to put more effort into the book, I could finish it relatively quickly.

That’s why I want someone to give me money.

Such things do happen. Many of my writer friends have finished books after winning grants. I got through most of my first draft with the help of some money from the Queens Council on the Arts and a residency at The MacDowell Colony. Unfortunately, I no longer live in the glorious borough of Queens, and now that I’m a parent, I won’t be heading off to a cabin for eight weeks.

Still, writing is an optimistic pursuit. Even with this crippling recession, I figured that there must be one or two suitable fellowships that I could apply to. And I had a way of narrowing the field. I’m a Jew writing a novel with Jewish themes — surely, I thought, there are foundations designed to nurture Jewish writing.

After blocking out a few hours to look into it, I got my answer: There are, but not for me.

For example, there’s the Foundation for Jewish Culture (FJC), which gives grants to scholars, documentarians, musicians and theater artists. In terms of literature, the FJC has the annual Goldberg Prize for Jewish Fiction by Emerging Writers, which includes a $2,500 grant and a two-week residency at Ledig House, an artist colony in upstate New York.

I was slavering when I learned of the Goldberg Prize; but “emerging,” in this case, means a writer who has published a notable first novel or debut story collection within the previous year.

The FJC gives the Goldberg Prize in conjunction with the Jewish Book Council, another organization with a laudable mission: the dissemination of books on the Jewish experience. Thus, among other worthy activities, the council awards the Sami Rohr Prize for Jewish Literature. This one comes with a $100,000 award (!) for an emerging writer.

The Jewish Book Council’s website describes its winners as “writers of exceptional talent and promise in early career.” Alas, a glance at the winners’ list demonstrates that this also means a writer who has already published one or two books.

There are other awards for Jewish writing. Moment Magazine sponsors the Moment Magazine-Karma Foundation Short Fiction Contest, which gives $1,000 to the winner. And there are quite a few “subvention” grants for Jewish studies, which help academics underwrite the publication of their books. But in terms of winning awards, it seems that you’ve got to have that first book.

I must admit that this is a sensible definition of “emerging.” Writers with a book contract have already to some extent been vetted. And one book is no guarantee of a career. So the emphasis on helping published writers build an audience also seems like the right idea.

Still, why, when it comes to Jewish literature, is there little help for the creation of new work?

With this question in mind, I called Paul Zakrzewski, who directs the scholarship and literature grant programs for the Foundation for Jewish Culture.

“Maybe it’s because the Jewish world tends to see things in terms of usefulness to the Jewish world…. But very often, Jewish artists — including writers — are seen as loose cannons. They can be critical of the Jewish world. Therefore, funders might feel stung,” Zakrzewski said.

Zakrzewski was only speculating, but this, too, seems sensible. Funders and arts foundations don’t have to worry about controversy when they are already familiar with the work in question. To some, this may sound cynical. But I don’t have a problem with it. Arts funders prefer to spend their time helping artists, not defending their decisions.

There are other reasons for leaving out new work by emerging literary writers, which I learned when I spoke to Rebecca Guber, director of the Six Points Fellowship. In terms of Jewish arts, Six Points is one of the more exciting developments in recent years, providing two-year fellowships in music, visual arts and performing arts, including playwrighting — but not in literature.

“The reason is logistical,” Guber explained. “We have a two-year program where the artist’s proposed project is presented in a venue in New York or Los Angeles, so that people can see it. The presentation is part of why the fellowship was conceived. But the presentation opportunities are more difficult for a writer. The book tour or the reading — it’s not part of art making. It’s auxiliary. Also the timing is unrealistic. For a writer to go from idea to completion in two years — the timing doesn’t feel right to us.”

But the rise of e-books has shortened the glacial pace of publishing, and readings, as a marketing tool, have become more professionalized. That’s why Six Points isn’t permanently writing off (as it were) literature: “It’s always on the table for us,” Guber said.

But she also pointed out that the recent renaissance of Jewish writing can’t be ignored: “Jewish book reading is a key part of Jewish engagement. And it’s mainstream America. When you look at successful American writers — there’s a big chunk of Jews on that list. So it could be that Jewish funders don’t feel the need.”

Maybe. And there are probably 10 more reasons why it’s difficult to find grants for writers like me. No one, for instance, mentioned the general decline in the market for literary fiction. Regardless, during my survey of Jewish arts funding, I did feel the occasional twinge of discouragement. But I would have to be monstrously (as opposed to mildly) self-involved if I weren’t heartened by the support for Jewish art and Jewish scholarship.

So until someone starts the Aging Pre-Emerging Jewish Writer’s Fund, I’m on my own. But in the end, every artist must rely on himself. I know plenty of “established” painters and composers and even well-published novelists who cannot support themselves on what they earn from their art — they teach, and they hustle for freelance work, and they hunt for grants, just like me.

And besides, a grant can only provide a temporary respite — some time and some cash. The artist must provide his own strength and patience.

Gordon Haber, who contributes frequently to the Forward, is looking for funding to finish an apocalyptic novel about the advent of the Jewish messiah.