Young Patients Find a Home Away From Home 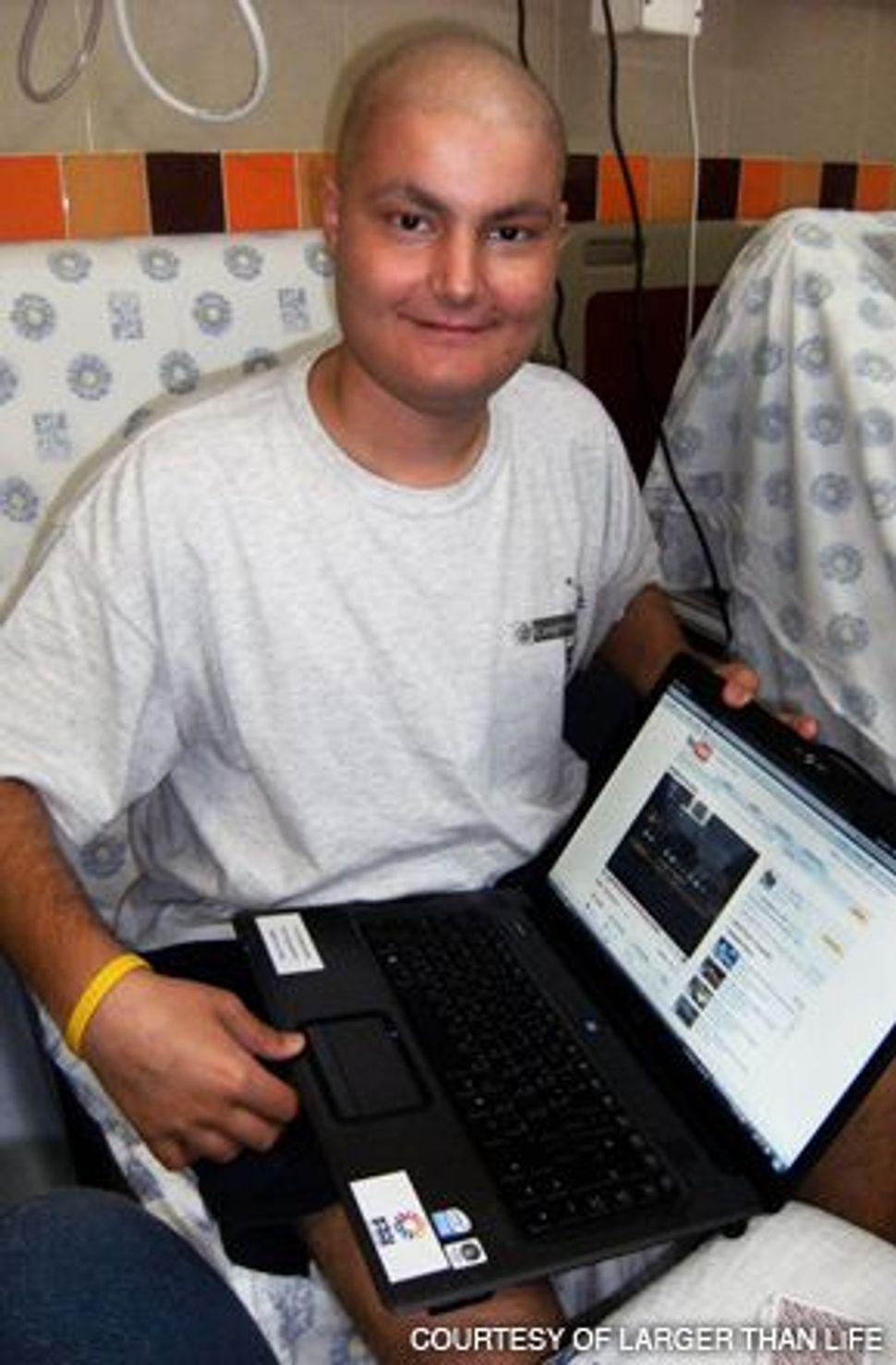 In early September, Leora and Chagai Greenspan, a couple from Nahariya in northern Israel, brought their 2 1/2-year-old child to San Francisco for medical treatment. The child had a brain tumor, and the surgeon at San Francisco Medical Center was the only one they could find who was willing to perform the delicate surgery. 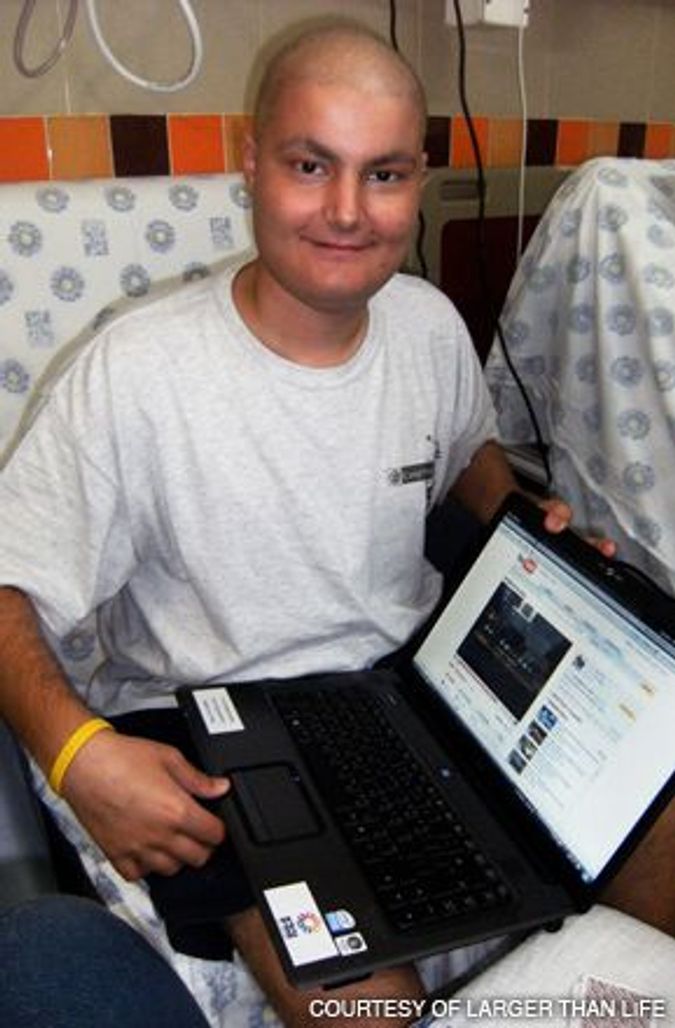 Without close friends or family in the area, this could have been a very lonesome ordeal for the Greenspans. Instead, a team of local Jewish volunteers arrived, accompanying them to the hospital daily, providing emotional support and even finding a family to host them for the Sabbath. The operation was successful, and the Greenspans were able to return home just in time to celebrate the Jewish New Year.

The volunteers were among the hundreds of Jewish individuals and families involved with the not-for-profit organization Larger Than Life USA. With offices in New York and Los Angeles, Larger Than Life aids cancer-stricken Israeli children and teenagers and their families when they come to the United States for treatment, providing translators and logistical support throughout their stay here. The organization also takes young patients on 10-day trips to the Disney theme parks and coordinates a number of other projects to ease the burden on the children and their families.

Because the Israeli government does not fund the organization, all the activities of Larger Than Life, which received tax-exempt status here in early September, are financed by contributions from individuals and businesses in the United States and Israel. Meanwhile, executive director Netta Nathaniel has been busy recruiting new volunteers and donors, beginning with her own town, Tenafly, N.J.

Last month, she spoke at a gathering in the sukkah of Tenafly resident Sandy Moss, a board member of the Tenafly chapter of the UJA-Federation. The 35 guests listened as the Israeli-born Nathaniel described her own moving experience with the family of a cancer victim.

Nathaniel explained that not long after being hired as executive director, she received an urgent call from Dr. Shulamit Katzman, a Miami pediatrician who is a co-director of Larger Than Life. “She asked me to send an interpreter to Beth Israel Hospital in Manhattan, immediately, for an Israeli family of a child with advanced brain cancer. I didn’t know any Hebrew interpreters, so I drove down myself.”

Two minutes after Nathaniel met the boy, 16-year-old Roi Goldman, and his family, the doctor made it clear that the intensive treatment would not save him — it would just give him several more months to live. “Imagine, here I had to tell total strangers that they would soon have to separate from their child. We all stood there and cried.”

The treatment did reduce the size of Roi’s cancer and helped to ease the boy’s pain. During the eight weeks that Roi and his family stayed in New York, Nathaniel and a number of volunteers found them an apartment in Brooklyn, visited them daily and served as interpreters. They also promised to include Roi on a trip to a Disney them park as soon as he began to recover.

“We even brought them to the grave of the Lubavitcher rebbe,” Nathaniel said. “The family wasn’t religious, but it gave them hope. We figured the doctor wasn’t God, he just looks at statistics. Maybe a miracle would happen.”

“Roi’s story ended sadly. He passed away this past February,” Nathaniel concluded. “But like him, the other children need hope, too, and bringing them to Disney World gives them that hope, because we have nothing like that in Israel. But please don’t do it out of pity. Do it to help them believe that they can win this fight.”

Nathaniel urged the audience to help find volunteers in other Jewish communities who could serve as interpreters and event planners, or make financial contributions, “to ensure that every donation will almost entirely serve the purpose of helping those kids.”

She showed the guests a three-minute video about the cancer-stricken children romping happily at Disney World. As they watched, a number of the guests wiped their eyes. Afterward, people thanked her and shared their own experiences caring for seriously ill children.

“Here in Tenafly, we already have an organization that helps children with cancer, called Jenna’s Rainbow, but we definitely need something like that in the Jewish community,” Moss said.

In early October, Larger Than Life was one of the charitable organizations featured at the Expo 2008 at the Tenafly JCC on the Palisades. This annual event teaches preteen boys and girls the value of donating a portion of their bar or bat mitzvah money to a worthy cause. After viewing the video about the Israeli cancer victims, one girl asked if she could be a pen pal with a girl her age and then meet her personally when she celebrates her bat mitzvah in Israel next summer.

“It was so amazing to see kids willing to share their bar and bat mitzvah gifts with others,” Nathaniel said. “In Israel, especially among the secular Jews, they don’t teach children the importance of giving tzedakah, the way they do here — that when a person does even a small chesed [good deed], it could have so much impact.”

Twice a year, Larger Than Life takes 35 children and a staff of health professionals on a “Dream Flight,” either to Disney World in Orlando, Fla., or Disney Land in Anaheim, Calif. “For many Israeli children, this is their first trip outside of the country,” Nathaniel explained. “Just getting away for a while from the chemo and radiation gives them, finally, a chance to relax. After two to three days, they take their wigs off and start sharing their feelings freely with each other.”

Larger Than Life’s chairman of the board, Avraham Cohen, told stories of how volunteers often try to fulfill the children’s personal requests, as well: “One time, a volunteer who arrived in a Ferrari noticed how fascinated the kids were with his car, so he offered them a ride; of course, the kids were thrilled. Another time, we discovered that one child was a basketball fan, so we got him tickets to a Miami Heat game, and afterward arranged for the players to shake his hand and pose with him for photographs.”

Katzman said that many children show signs of improvement during the theme park trips. “In quite a few cases, the blood tests reveal better results, and some of them start growing hair again,” she said.

Donations to Larger Than Life also help support the activities run by the organization’s Israeli counterpart, G’dolim m’ha-chaim, including a weeklong sleep-away camp near Haifa for 100 cancer-stricken children, and the “Purim Smile Train” — a train ride every Purim that picks up sick children and their families as it moves from Haifa to Beersheba, and ends with a Purim feast attended by Israeli pop stars and entertainers.

In addition, this past summer, Larger Than Life purchased and shipped 10 laptop computers to three pediatric oncology wards in Israel to assist the bedridden children, for whom the Internet is their only connection to their friends, their studies and daily activities.

“But right now,” Nathaniel said, “our most important goal is to raise enough money to be able to bring the next group of children to Disney World in February 2009.”

Young Patients Find a Home Away From Home