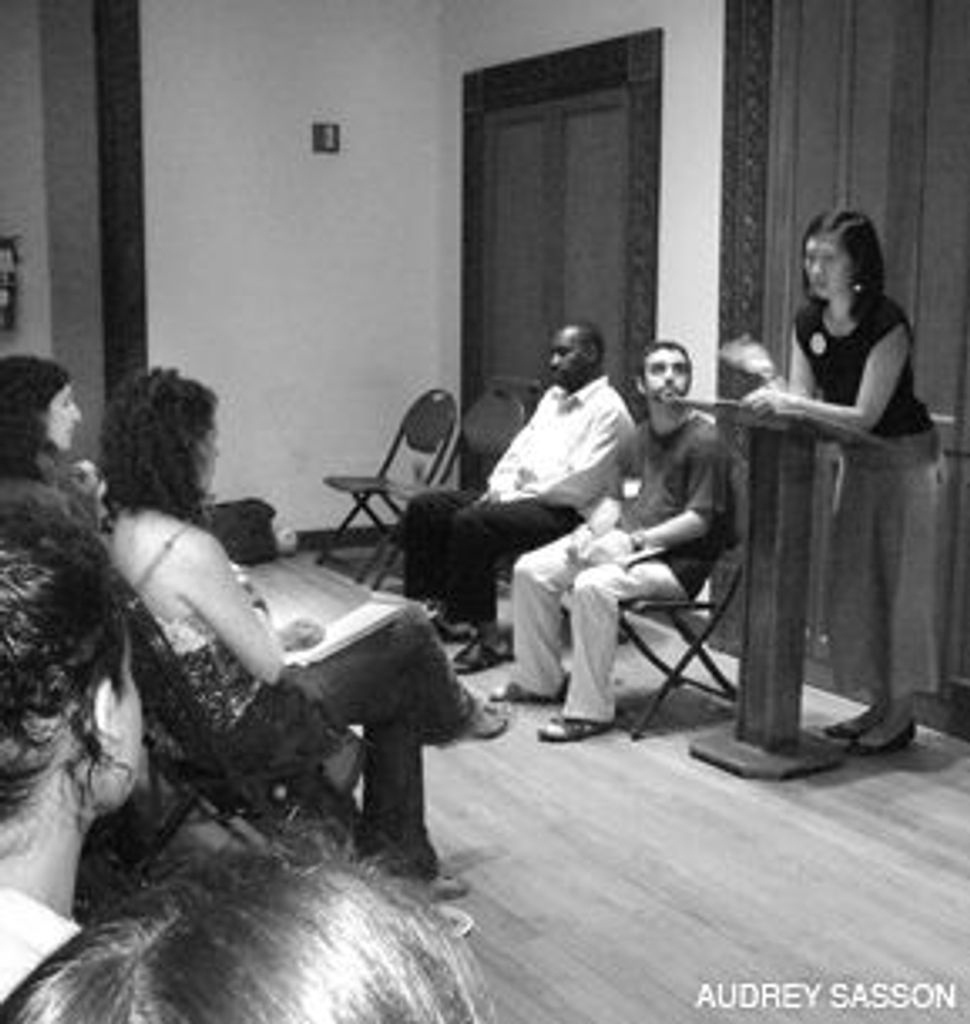 GETTING ORGANIZED: Cristina Moon, a representative of a group that advocates for freedom in Burma, spoke at the Oy Olympics.

Fighting poverty and improving public education are no easy tasks, but for young activists living in such a huge city as New York, finding kindred spirits to march with at the next rally can be a challenge in its own right. A group of politically progressive Jewish 20-somethings is trying to make it a little easier. 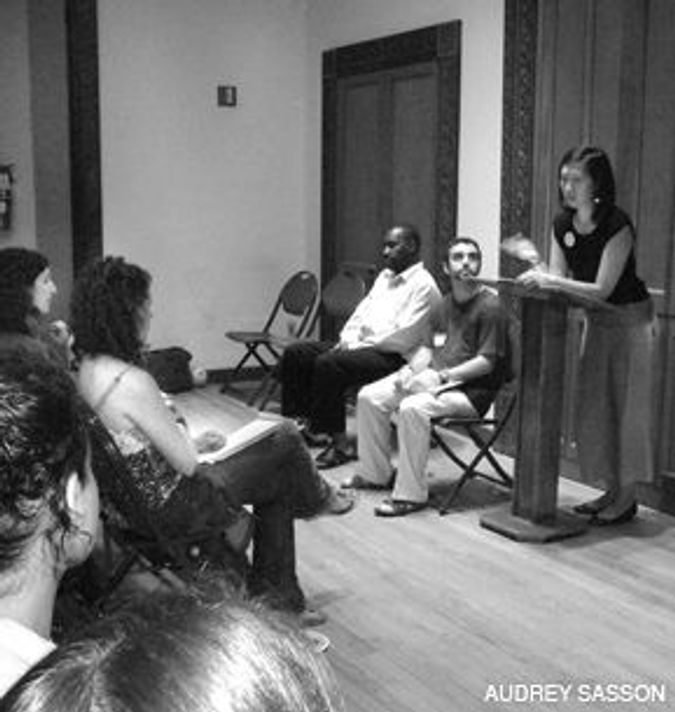 GETTING ORGANIZED: Cristina Moon, a representative of a group that advocates for freedom in Burma, spoke at the Oy Olympics.

The group’s six organizers in New York all had a head start on finding like-minded comrades: All are alumni of either American Jewish World Service, a Peace Corps-like program that sends volunteers around the world, or Avodah, which sets up recent college graduates for yearlong stints at poverty-relief organizations in several cities in the United States. But they say that their new endeavor, a joint project of AJWS and Avodah called the New York City Team, is helping to make that diffuse network of friends and colleagues into something more cohesive.

“The Jewish social justice world isn’t that huge,” said Melinda Koster, 24, an Avodah graduate who also went on two AJWS trips and is now part of City Team. “It definitely can start to feel like you know everyone. But it can also feel difficult to jump into.”

For some of the people that City Team hopes to reach out to — Jews who want to become more socially active, or progressive activists who want to tie their work to their Jewish identity — “jumping in” may mean linking their political work and their religious or cultural lives for the first time. For others, it may mean re-creating the intense experience of a program such as Avodah or AJWS, in which discussions about the relationship between Jewishness and activism are ongoing.

Rather than forming around a particular political issue, City Team is focusing for now on trying to create a community. The organizers have met several times since the group formed in February, and they’ve hosted an event in August aimed at raising awareness about China’s human rights record before this past summer’s Olympics. Members say that more events will follow.

“We’re forming around who we are, and that will dictate what we end up doing,” said Zach Strassburger, a City Team member who works at a not-for-profit organization that helps low-income people navigate the mental health-care system. Strassburger’s job grew out of the work he did through Avodah last year.

Strassburger is organizing an event, scheduled for next month, that will deal directly with establishing “who we are.” At that program, called Jew Roots, attendees will participate in a “forced choice” exercise in which they congregate in different corners of a room, based on their answers to a number of questions, from “Do you eat pork?” to “Do you feel you can talk about Israel in ways that are comfortable to you within your Jewish circles?” to “Are you a part of a Jewish community?”

Members say that as the group evolves and, they hope, expands, their diverse interests will lead to a wide range of programs.

“Our alumni work in various sectors, from teaching to social work to law,” said Audrey Sasson, AJWS and Avodah’s program officer for alumni activities. Sasson is responsible for creating City Team in New York. (A similar group is being formed in San Francisco.)

Because everyone in the group works on different issues in individual day jobs, City Team members say that they have entrée into a Jewish activist community larger and more diverse than the groups of co-workers or fellow activists that they may have already cobbled together.

“There are already Jewish social justice communities out there, but a lot of those are in very issue-specific areas,” Koster said. Jews United for Justice, a group with which she volunteered, focuses on issues of labor and the environment; the Hebrew Immigrant Aid Society, where Emily Gold, another City Team member, works on the needs of immigrants and refugees.

Koster, who worked during her college years on campaigns aimed at ending the genocide in Darfur, and Gold, who spent a year with AJWS in Thailand, teamed up to organize City Team’s first event, the Oy Olympics. They put together a panel discussion about China’s role in the violence in Darfur and repression in Burma, held a few days before the summer games began. The event, which drew some 50 people, was followed by a Sabbath dinner on the night of the games’ opening ceremonies and was billed as an alternative to Olympics-watching parties.

“This is the kind of community I’m looking to sustain,” said Koster, who is two years out of Avodah. “Five years down the road, I still want to have that.”