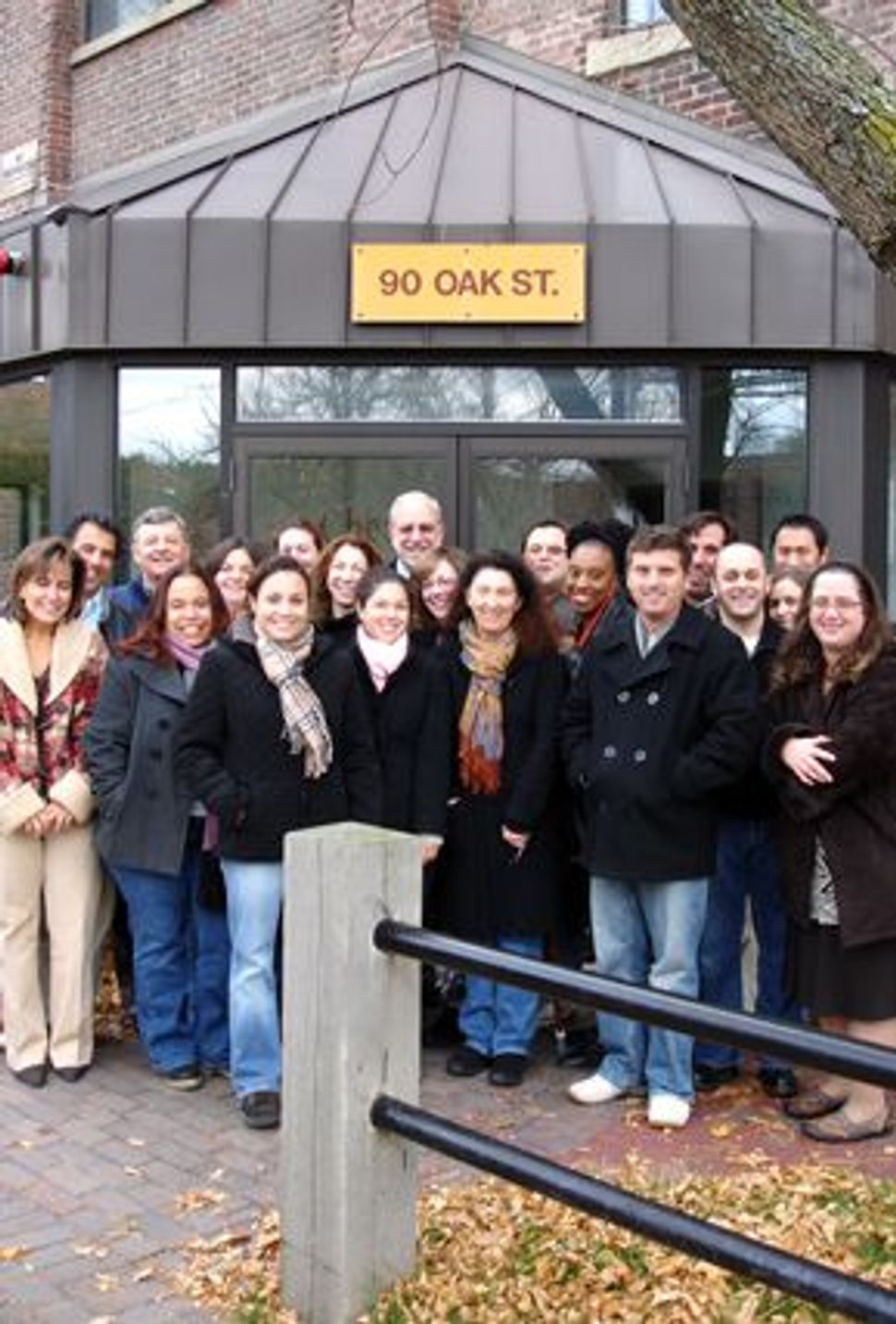 Back in September, JBooks.com, the Web site I edit, teamed up with JVibe*, the magazine for Jewish teens, to throw an intergenerational event called Get Lit 2008. Preparing for this literary *soirée (which featured writers Tova Mirvis, Jonathan Wilson, Adam Wilson and Jon Papernick) was a lot of work, but publicizing it was remarkably easy. Why? A happy accident, really: our publications live in a kind of non-profit kibbutz here in Newton Upper Falls, Mass., and many of our friends and neighbors helped get the word out. 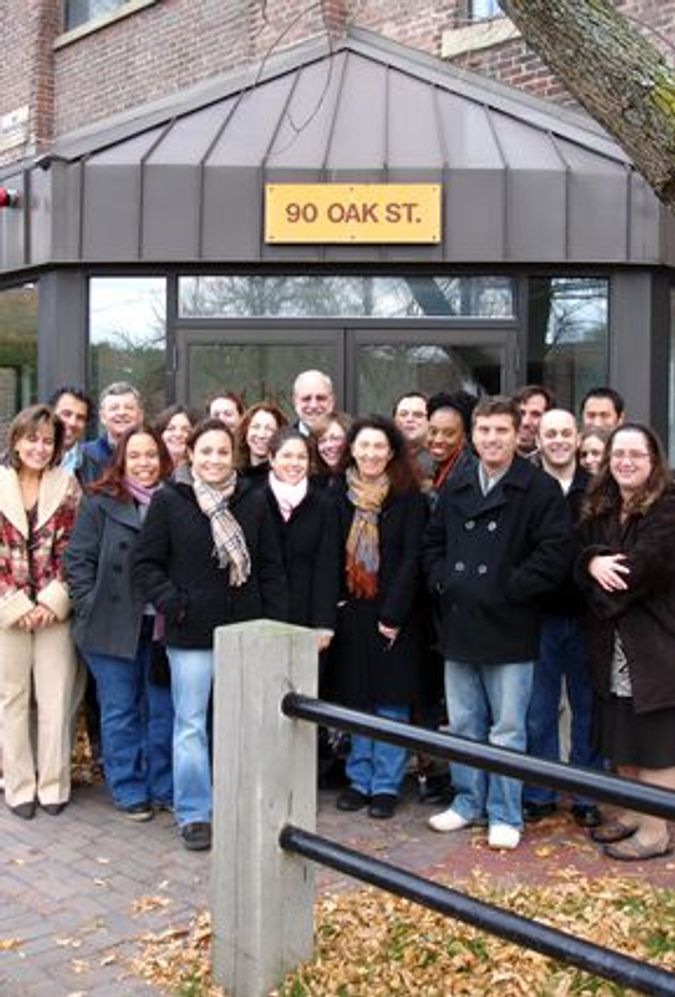 A few years ago, JFL Media, our parent company, decided that it would make economic sense to share our workspace, the fourth floor of a seen-better-days red-brick building, with other local Jewish organizations. Since then, JFL — which also publishes Sh’ma: A Journal of Jewish Responsibility and the kids’ educational magazine BabagaNewz — has welcomed all sorts of folks into our heimish offices at 90 Oak Street. Today, we house 10 different Jewish non-profits, and together, we cover the $300,000 overhead, which is a big help in this horrible economy.

But the spirit of 90 Oak isn’t just about cutting costs; it’s really about sharing ideas and even communities, and we’re just starting to realize the potential here. In many ways, the denizens of the fourth floor are a microcosm of Jewish Boston. We’re observant and secular, kids just out of college and people with kids in college. A few of us aren’t Jewish at all and virtually everyone here belongs to at least one outside group in the local Jewish community. So, despite the conventional wisdom that every Jewish org makes shabbes for itself, Get Lit showed that 90 Oak-ers are willing and able to act on the idea of non-profit peoplehood.

When organizations housed in 90 Oak heard about Get Lit, the response was amazing. The New England Region BBYO (B’nai B’rith Youth Organization) alerted its nearly 500-person listserv. The Curriculum Initiative or TCI (“Jewish resources and culture for independent schools”) included a Get Lit message in an e-mail newsletter. Gateways, a Jewish special-ed organization, requested 60 Get Lit fliers and mailed them out to the teenagers with whom they work. The Foundation for Jewish Camp helped spread the word, via their Bildner Fellows, on the Brandeis campus, and Sh’ma posted a Get Lit banner ad on its Web site. Finally, Interfaithfamily.com plugged a Get Lit ad into an e-mail to its Boston readers, and announced it on the Web site as well. And the cost of all this publicity? $0.

Interestingly, this wasn’t the first interoffice collaboration. Gateways has been the subject of articles for both BabagaNewz and JVibe*, *and JBooks and IFF co-published an issue on interfaith literature back in February. “One of our biggest challenges is finding unaffiliated interfaith couples, who by definition are not connected to the Jewish community,” said Micah Sachs, IFF’s director of Web strategy. “But they do read books — and many of them read Jewish books, which made JBooks a natural partner.” He added that “it didn’t hurt” that my cubicle is less than 50 feet from his.

But the Get Lit event was a more personal partnership: Our *landsmen *brought posters to their synagogues, to their children’s Jewish schools, to local Hillels and to businesses. They also put their Facebook pages to work and used them to invite friends and family. Sara Marx, a BabagaNewz Web editor, said, “I told my husband he was required to attend.”

News of our collaborative environment is starting to filter out beyond our New England shtetl. “This interorganizational work is part of JFL’s mission, part of the model,” said Amir Cohen, CEO of JFL Media. “There’s tremendous interest from other organizations and from foundations in what we’re doing here with social entrepreneurship.” This sentiment is seconded by Nigel Savage, the founder and executive director of Hazon, who is trying to create something similar to 90 Oak he calls Makom Chadash. “In an earlier life I wanted to make aliyah to Newton Centre — and have Hazon be part of the space,” said Savage, who is based in Manhattan.

Of course, sharing this communal space means different things to different 90 Oak tenants. Life at our cubicle-crowded office means that Lesley Litman, executive director of Hebrew at the Center, sits on BabagaNewz’s Editorial Board and that one of her employees serves as BabagaNewz’s managing editor. For a modest organization like TCI, it means walking into work on day one and having immediate access to a $40,000 phone system and two copiers.

The fact that those of us working at 90 Oak know precisely who lives in our communities and what appeals to them, and that we’re willing to tap them on the collective shoulder for a good cause, made promoting Get Lit less of a marketing project and more of a family announcement. And if that sounds unusual, so be it: 90 Oak Street is an unusual place to do business.