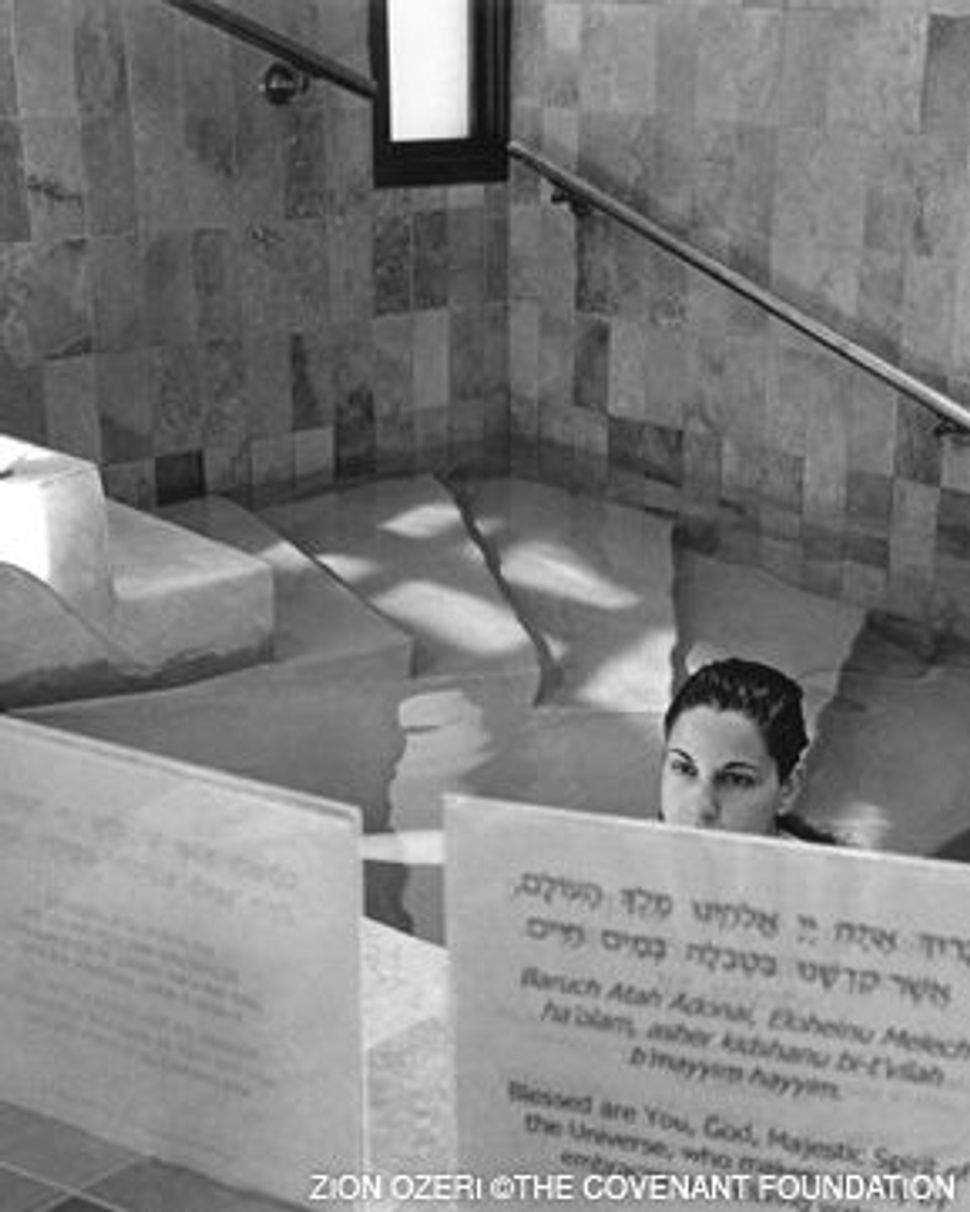 IMMERSION: A photo illustration of the ritual bath at Mayyim Hayyim, a progressive mikvah and education center in Newton, Mass., which has received two grants from the Covenant Foundation.

With 18 years and counting of support for innovative initiatives in Jewish education, the Covenant Foundation marked its chai anniversary last month with a three-day celebration in New York City. The festivities included a gala evening, dispersal of awards and — true to Covenant Foundation form — opportunities for serious discussion among some of North America’s most creative Jewish educators. Attending were 40 of the organization’s 54 surviving Covenant Award winners and more than a dozen emerging leaders in Jewish education. 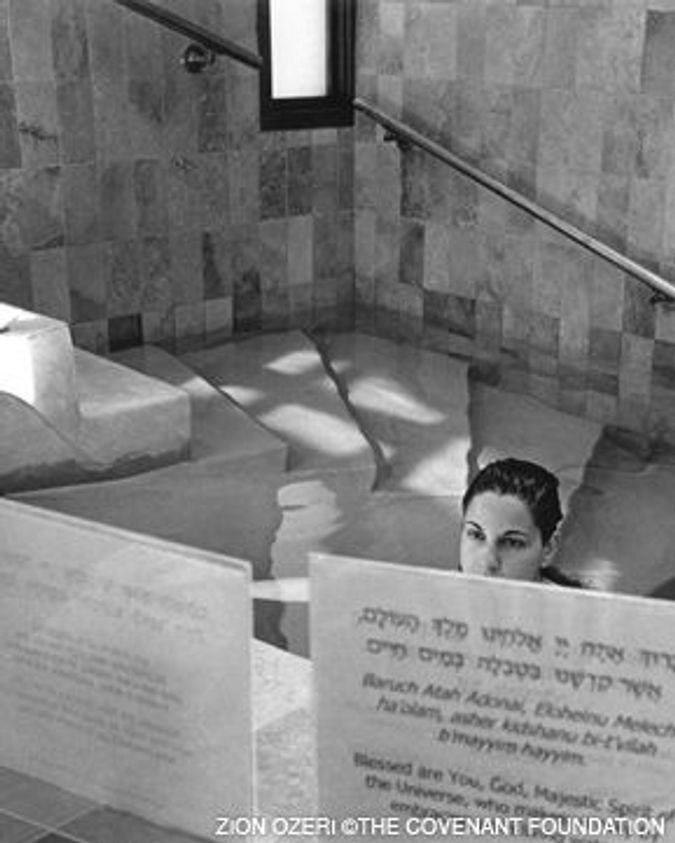 IMMERSION: A photo illustration of the ritual bath at Mayyim Hayyim, a progressive mikvah and education center in Newton, Mass., which has received two grants from the Covenant Foundation. 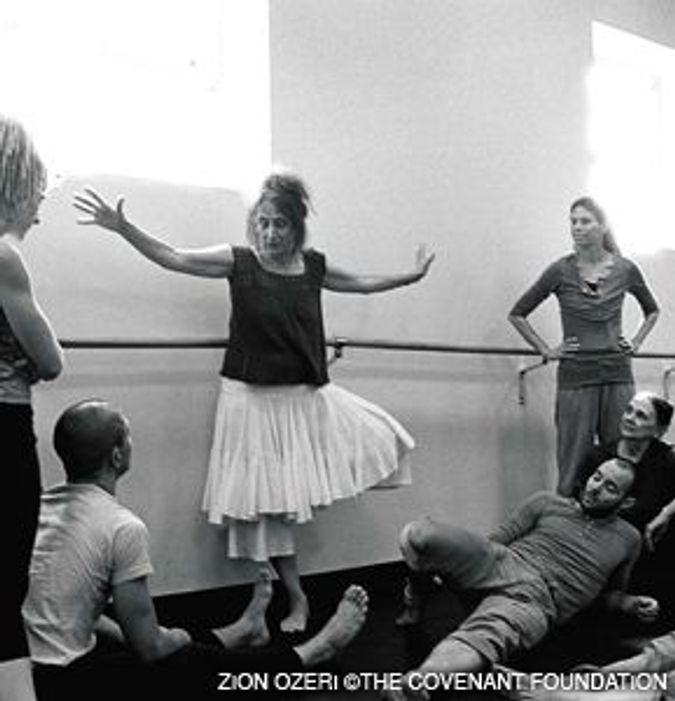 Founded in 1990 by the Crown Family Foundation, and working in partnership with the Jewish Education Service of North America (JESNA), the New York-based Covenant Foundation was one of the first national foundations to devote resources to the field of Jewish education. It distributes $1.3 million in grants and $300,000 in fellowships and prizes annually. Many foundations give considerably more to Jewish education each year; the Morton L. and Barbara Mandel Fund of the Mandel Supporting Foundations, for example, gave $4.8 million to Jewish education in 2004, according to Aryeh Weinberg, research associate for the Institute of Jewish and Community Research. The Covenant Foundation, however, has carved out a niche: it specializes in taking calculated risks on worthy new projects that lack mainstream support.

“In general, the Covenant Foundation’s giving, while not in competition to be the largest sum, is a significant contribution to Jewish education,” Weinberg said in an e-mail to the Forward. “Moreover, the focus of its giving and consistency increase its importance to the field.”

Other foundations tend to promote defined goals: developing leaders, strengthening institutions, or fostering day schools and summer camps, for example. The Covenant Foundation, in contrast, has an open mandate to shine a spotlight on exceptional leaders in Jewish education, and to support high-quality, groundbreaking efforts, regardless of topic, denomination or discipline. It does so in two ways: by distributing awards to individuals, and by granting catalyst funding for new projects.

Covenant is believed to be the only Jewish education-supporting foundation that accepts unsolicited grant proposals. Its standards are exacting: each year, it gives awards to three of 200 nominees, and funds 15 out of 300 grant proposals. For new projects lacking resources, a benefit of a Covenant grant is its power to attract additional funders.

The majority of the Foundation’s gifts go to Jewish organizations, yet in determining where to inject its dollars, the Foundation defines “Jewish education” broadly. The spectrum spans projects within Jewish institutions, for Jews and about Jewish subjects, to projects of wider interest but encompassing Jewish concerns.

Exemplifying the farther end of the spectrum is a three-year, $250,000 grant the Foundation gave to the Maryland-based Liz Lerman Dance Exchange, in 2006. The Exchange’s performance piece, “Small Dances about Big Ideas,” was commissioned by Harvard Law School and the non-profit educational organization Facing History and Ourselves, to commemorate the 60th anniversary of the Nuremburg Trials. With its Covenant grant, the Exchange is developing educational programs for schools and congregations to accompany its “Big Ideas” performances. “They accepted a project from us that was stronger on vision and intent and philosophy than it was on concrete specifics on how we’d do the work and who it would impact,” said John Borstel, the project director. “They took a leap of faith on us. Another foundation might have demanded more detail. They challenged us to frame something really compelling.”

An example of a grant with more readily identifiable Jewish content was awarded to Rabbi David Silber in 1992. Silber, founder and dean of the Drisha Institute for Jewish Education in New York, received $100,000 to start up Scholars Circle, a program exclusively for women who are pursuing intensive study of Talmud and Jewish law. Silber, who also received the 2000 Covenant Award, believes that the Foundation was attracted to the idea because of its potential to change the way many people thought about women and Torah study. The program continues to this day.

Like Covenant’s grants, its awards are also wide-ranging. This year, for example, the Foundation gave awards to Diana Ganger, project director of the Jewish Early Childhood Education Initiative in Illinois, for her work placing families at the center of Jewish early childhood education; to Rabbi Yakov Horowitz, leader of New York’s Yeshiva Darchei Noam, for informing his educational approach with careful attention to his students’ needs; and to Susan Werk, educational director of Agudath Israel, a Conservative synagogue in New Jersey, for programming that successfully reaches congregants of all ages. They each received $36,000, plus $5,000 for their institutions.

The Covenant Foundation grew out of the Crown family’s own disappointing encounters with Jewish education, and its desire to bring improvement. “My grandfather and great uncles sent my cousin Susan [Crown] and I on a mission with something the family could do that would be meaningful and impactful,” said Barbara Goodman Manilow. After more than a year of research, Crown and Manilow saw a theme emerge. “Teachers kept talking about their need to dream,” said Manilow, “but there was no community support to dream and initiate new programs. We decided to support their ability to do that.”

Jonathan S. Woocher, JESNA’s chief ideas officer, has served on the Foundation’s board since its inception. He said that Jewish education must be able to adapt to a changing world, and that’s why the Foundation’s work is important. “Change is resource-hungry,” he told the Forward. “In the Jewish education world, there are not good systems for sharing innovations and moving successes.”

For this reason, the Foundation has established ways for its recipients to network and share ideas. In their grant proposals, applicants must explain the potential greater impact of their projects, and how they might reach wider audiences. The Foundation prints publications and sponsors retreats and seminars. “Because of the Covenant Foundation, we have gotten to know other grantees and now we are resources for each other,” said Aliza Kline, executive director of Mayyim Hayyim, a progressive mikvah and education center in Newton, Mass. In 2007, Mayyim Hayyim received a three-year, $150,000 grant to create educational, consulting and training resources for progressive mikvahs around the country.

After 18 years, what impact has the Covenant Foundation had on the field of Jewish education?

“It’s a tough thing to gauge,” said JESNA’s Woocher. “Spending $30 million over 18 years is a drop in the bucket. But it has had an impact in terms of increasing the visibility and prestige of educators. Within the Jewish communal world, the awards are known and respected.”

A study commissioned by the Foundation concluded that more than 70% of Foundation-launched projects, or vestiges of projects, still exist. Given how often dreams are forgotten, that doesn’t sound like a bad rate of return for the Crown family.