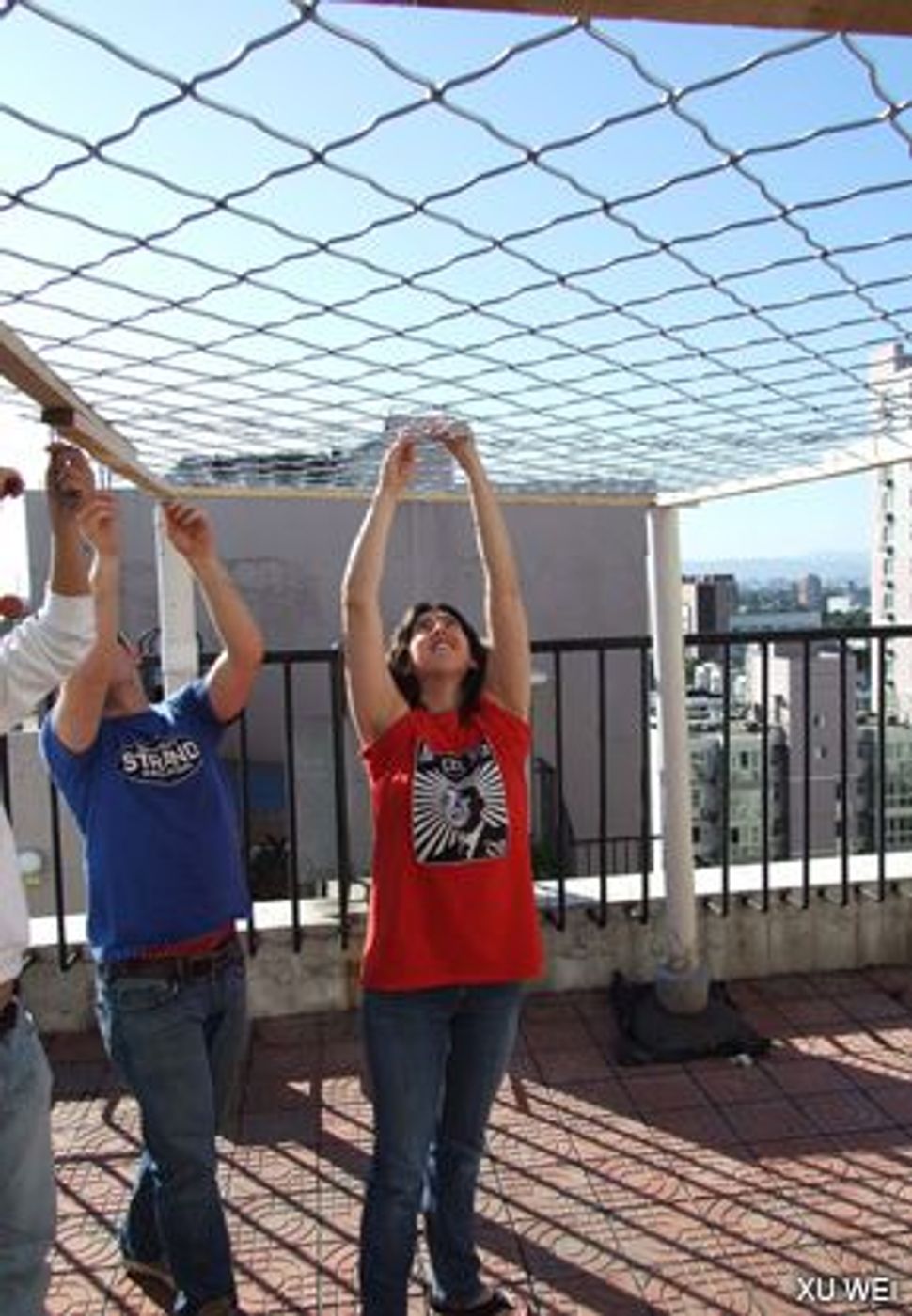 GROUP EFFORT: Young Jews worked together to put up a rooftop Sukkah in Beijing.

My roommates and I built the only rooftop sukkah in Beijing, 16 floors above the traffic on Second Ring Road, overlooking Sinopec headquarters and the small Olympic park next door. It was a true Chinese sukkah — made in part with PVC pipes and metal wire from a local construction market — and we were nervous that our neighbors would assume we were building some kind of permanent structure and report us to the Public Security Bureau. 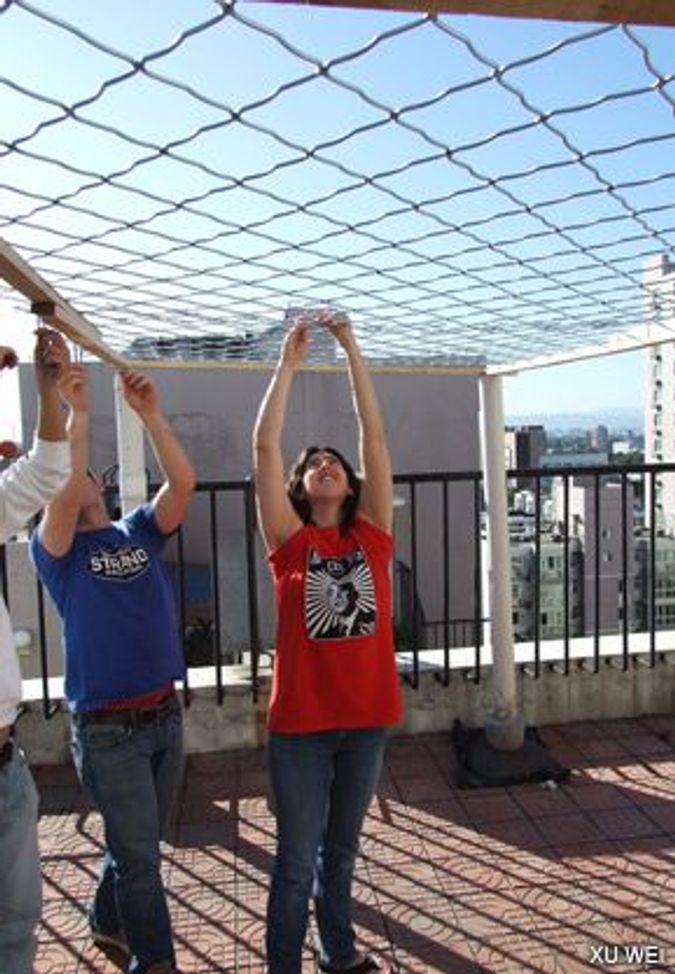 GROUP EFFORT: Young Jews worked together to put up a rooftop Sukkah in Beijing.

We put up our sukkah frame quickly, hanging the cloth walls at the last minute, in hopes of avoiding a culture clash with the police. (“Don’t worry, officer, by definition a sukkah cannot be permanent. I promise it will be down after Simchat Torah.”)

We didn’t want our sukkah to draw negative attention to our house: Besides the fact that Judaism is not technically a legal religion in China, we plan on hosting many more Jewish community events in the future.

That is because our apartment was recently designated as Moishe House Beijing, meaning we are one of 25 hotspots for the young Jewish community around the globe. The California-based Moishe Foundation furnishes us with a programming budget and a partial-rent subsidy, occasional leadership training and networking opportunities with our peers at other houses — and leaves the actual community-building up to us.

The Moishe Foundation’s mission is to empower us, young Jewish leaders in our 20s, to cultivate meaningful Jewish experiences among our peers. Established Jewish community structures often rely on synagogues and schools to engage people, which leads to a gap in active Jewish participation for post-college, pre-family adults. If young adult Jews are having difficulty finding their place in Jewish life in the United States, how much more so in Beijing?

So the construction of the Chinese sukkah was less important to the Moishe Foundation than the sukkah’s inhabitants. Our events throughout the week of Sukkot saw a parade of Jewish 20-somethings and their friends come to dine, drink, discuss and create in our rooftop sukkah.

That is the biggest genius behind the Moishe House model — not the monetary support, but a reliance on grass-roots programming initiatives. The money currently comes from a few different sources, but mostly from the Center for Leadership Initiatives, funded by philanthropist Lynn Schusterman. Yet there is not a single ideological string attached to a single dollar (or RMB).

The Moishe Foundation does not issue directives from the top about what specific events should be held each month, but it does ask for a mix of religious and secular activities. This means that when it comes to bringing together Jewish people, a Tuesday night dinner counts just as much as a Friday night dinner, and a Chinese class is just as valid as a Hebrew class.

Furthermore, Moishe House materials specifically mention that events should be open to everyone, and even state that a house can have non-Jewish roommates (they simply aren’t covered in the rent subsidy). These kinds of policies avoid the perception of Moishe House as a closed-off community with mysterious deep pockets.

It seems as though Moishe House successfully steers clear of sectarian agendas, and these include the issue of “intermarriage prevention.” Although it may sound like a live-action JDate service, Kevin Sherman, Moishe House’s director of international programming, stressed that the Moishe House concept is not a matchmaking strategy. “That’s not why we come to the office in the morning,” he said about himself and his four colleagues, all in their 20s. If any relationships grow out of a Moishe House community, they will arise naturally.

Beijing is the first Moishe House in Asia, and we are part of a growing number of international locations for this program, originally designed for implementation in the United States. Expanding to international outreach isn’t about finding an exotic corner of the globe and marooning young Jews there, lying in wait for businesspeople and tourists who need a place to celebrate Passover. The objective of Moishe House Beijing is the same as the objective of Moishe House Hoboken, N.J. As a young Jewish American in her third year living in China, I think that the Moishe Foundation’s decision to include communities abroad, whether they comprise mostly locals or expats, shows that the organization really is attuned to the realities of my generation. We are mobile, we are equipped to maneuver in a global economy, and we believe we can be Jews anywhere in the world.

And thanks to technology, the foundation can keep tabs on the activities of members all over the world. In Beijing, we host three events a month, write blog posts, upload photographs and food receipts, and provide an attendance count as well as the number of first-time participants. In 2007, Moishe Houses worldwide hosted a total of 1,628 events that engaged 29,492 young people, 10,658 of whom were first-time attendees. Last month, 33 people came to our events in Beijing, and half of them came back twice in the same month.

With attendance figures for the first 10 months of 2008 already exceeding those for all of 2007, the success of Moishe Houses shows that an adaptable and organic approach to building Jewish community and identity works better every time.