Coming of Age in Cambodia 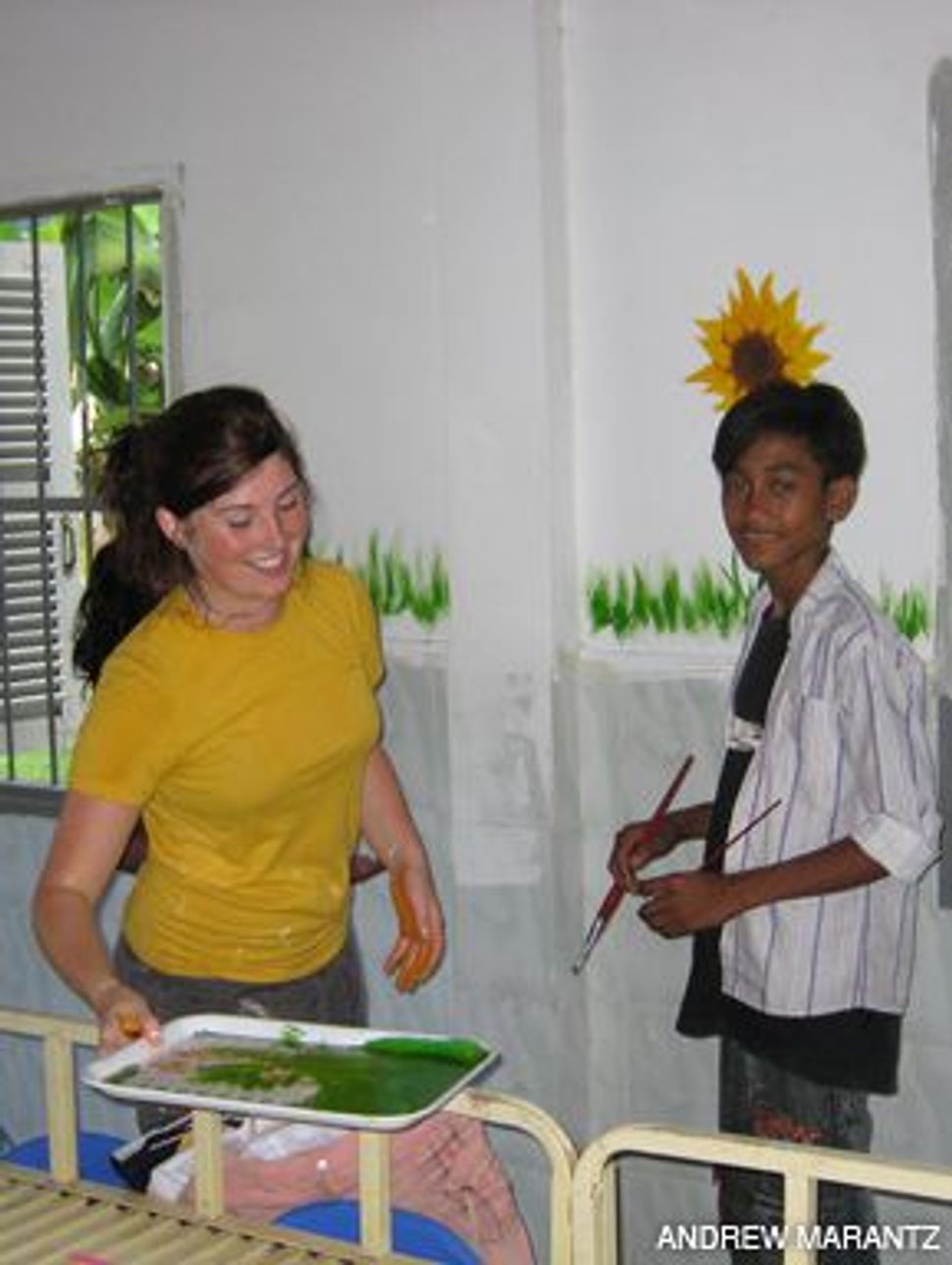 ARTSY: Erin and Sambo work on a mural at the Kampong Chhnang orphanage.

This past July, a few high school students and I sat around an unusable fireplace in an air-conditioned library at Yale. The teenagers wore flip-flops and short shorts and sunburns; they peppered their speech with “like,” as well as their newly acquired SAT vocabulary. At my behest, they were discussing the ethicist Peter Singer. 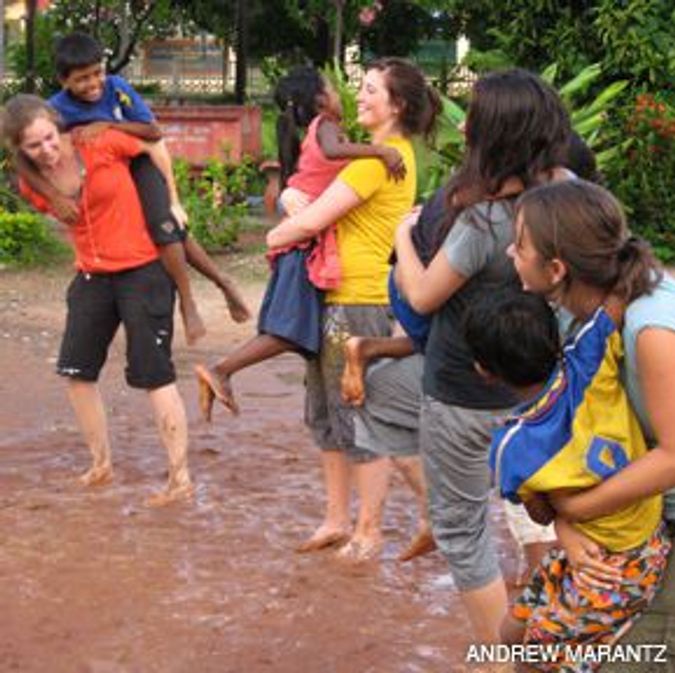 MUDDY WATERS: At an orphanage in Kampong Chhnang in central Cambodia American volunteers play with children in the post-monsoon murk. 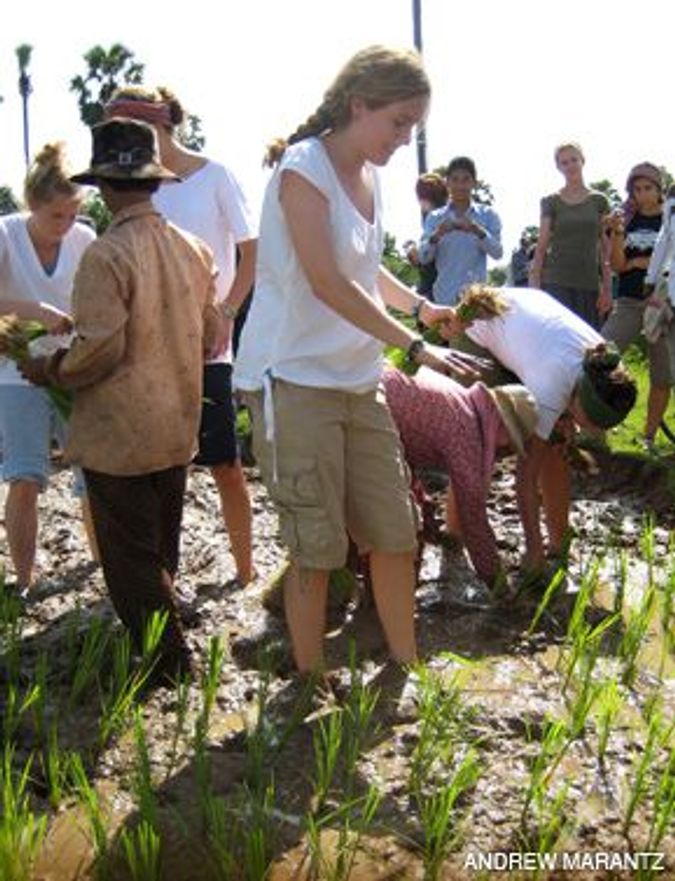 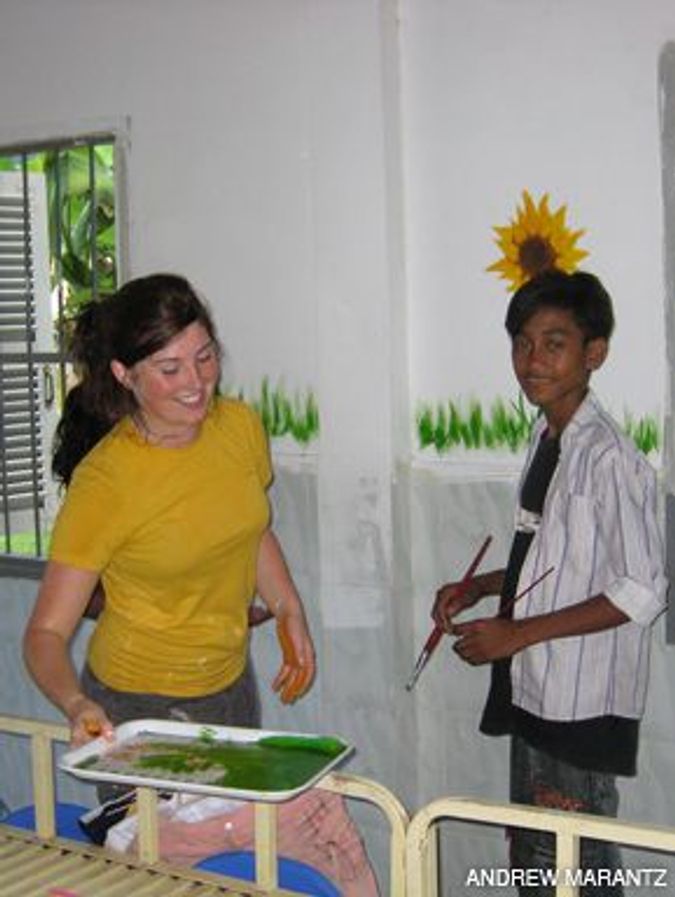 ARTSY: Erin and Sambo work on a mural at the Kampong Chhnang orphanage.

Singer takes a hard-line approach to charity. He estimates that a $200 donation to Oxfam or UNICEF will, on average, protect one poor child from a preventable, fatal disease. Therefore, he argues, every time we spend $200 on something else — an iPod, say, or a bottle of wine — we have essentially allowed a child to die.

Predictably, the American teenagers were not Peter Singer fans. They were, by and large, remarkably wealthy. Some of them had Blackberries; almost all of them had iPods; and they did not enjoy being told that they were, therefore, baby killers. (Full disclosure: I also own an iPod.)

“All right, so then, why are we here?” asked a redheaded girl, with the sudden gusto of a chess player who has nimbly avoided check. “Our families are spending, you know, thousands of dollars to send us on this program. How many babies could we be saving instead?”

Before answering, let me provide some context. While I enjoy shaking the moral foundations of affluent children, I do not do it pro-bono. Rather, I had been hired by Putney Student Travel to co-lead one of its month-long Global Awareness in Action programs: a few days of seminars at Yale (hence the fireside chat) followed by four weeks of travel in the developing world. My students would fly to Cambodia, where they would tackle “women’s and children’s issues” and work with related NGOs: anti-trafficking groups, schools and orphanages. I was nervous about traipsing through the developing world with an entourage of 13 teenage girls (yes, they were all girls), but overall, I thought I was doing good work.

I imagined that the girls’ parents thought about the trip similarly, writing off the tuition check as a charitable cost — if not for tax purposes then for moral ones. The observant Jews among them might even have considered it part of their tzedakah requirement for the year.

Still, the redhead’s question lingered. “How many babies could we be saving instead?” A Putney trip costs between $7,000 and $8,000. Even with a weak dollar, it need not cost $7,000 to volunteer in Cambodia. If just one student’s tuition was donated to UNICEF instead, then, by Peter Singer’s estimates, 40 lives would be saved.

So which was it? Tzedakah or a shanda? Was I shaping the leaders of the future or committing mass infanticide?

All major religions (unless you count capitalism) mandate some form of charity. Like most religious concepts, charity seems simple until you think about it. If I have enough, I should give. But how much should I give, and to whom?

Or, instead, I can give money to those who represent my ideals: politicians, advocates or nonprofit groups. Most political campaigns and large NGOs have millions in the bank —they are hardly destitute — but a gift to one of them still counts as charity. Right?

A single, simple definition of charity might be obsolete. Yes, Peter Singer makes a good point: If we believe it is right to give money to the poor, we should also believe the inverse, that it is wrong not to give to them. But I am not convinced that “right” and “wrong” are the only categories available to us. Those two boxes — charity or indulgence, saving a child or killing a child — are too rudimentary, too inflexible, to represent the real world.

What if I never give to UNICEF, but instead finance a documentary about climate change? What if I splurge on hospice care for my dying mother, or art supplies for needy orphans? Am I still a baby-killer then?

The fact is, most of the ills of the world are interconnected. If we truly treat philanthropy as a long-term investment — and I think we should — we cannot expect an immediate, observable return.

Through this lens, it becomes harder to condemn the parents who sent their children on my trip to Cambodia. Yes, the trip did involve as much “voluntourism” as volunteerism. Yes, it was geared more toward the American students’ character-building (and resume-building) than toward the needs of Cambodian women and children.

Yes, each family could have saved 40 lives with their tuition money; and frankly, if they had asked me, I might have advised them to do just that.

But I do not think the trip was a waste. If you seek proof, look no further than that truism of truisms: The Children Are Our Future.

Many of these teenagers had never been to a developing country. Of those who had, most of them had never thought critically about development or white privilege. They had never had the searing, formative experience of doubting one’s place in the world. Now that they have, they are one step closer to becoming global citizens. They are now better equipped to think broadly and care deeply about global issues. If they and their peers are savvy enough, they could one day steer America toward a more just foreign policy and a safer future.

There is no guarantee that any of this will happen, of course. Leading some rich teenagers on a tour of a few schoolhouses is not the most direct way to help Cambodia, or the world. It is possible that the trip will have few beneficial effects — that it will have been, from a philanthropic standpoint, a waste. But in a world as complex as ours, some investments in the future must be high-risk.

Coming of Age in Cambodia