No Green Cards at the Green Line 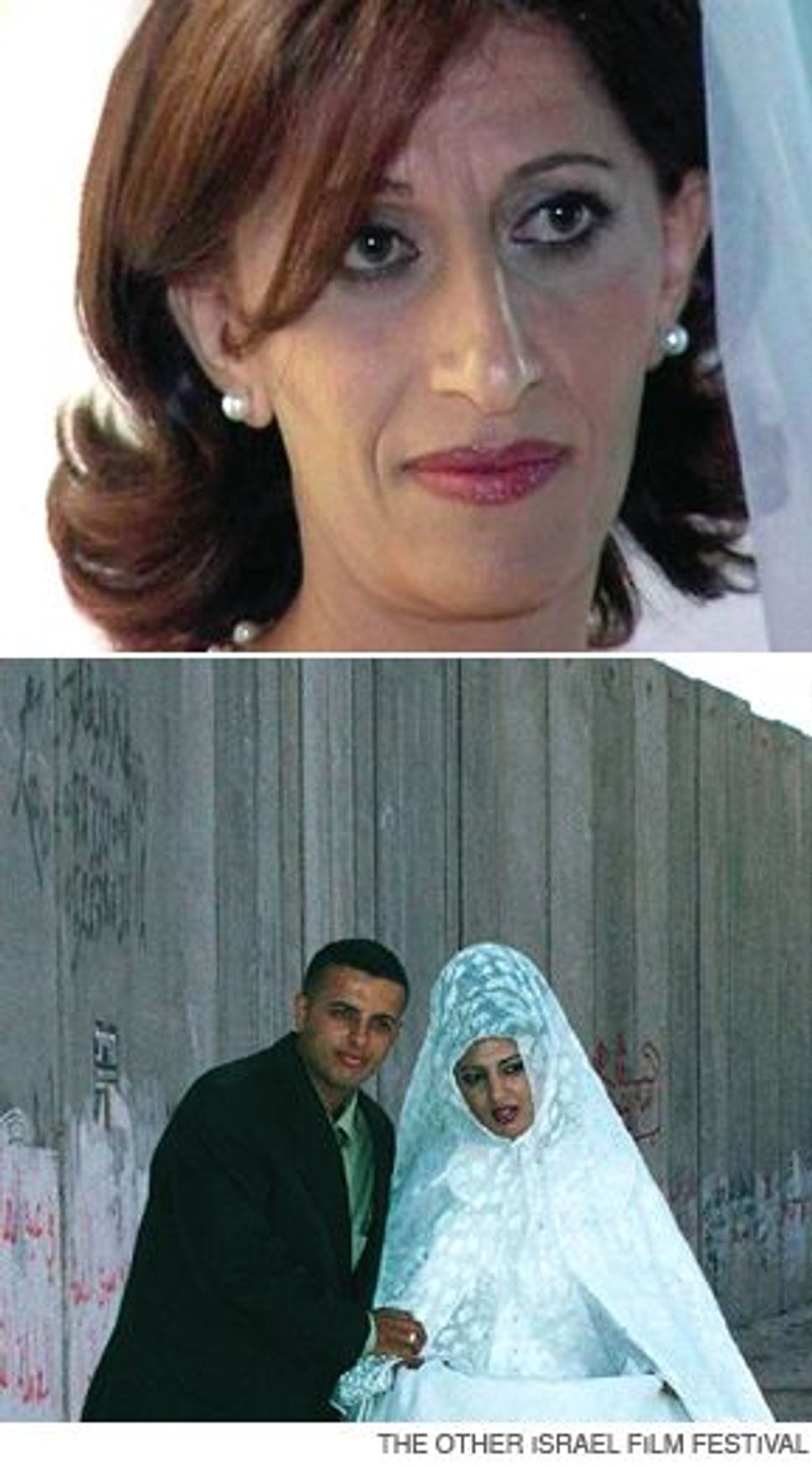 ?JUST MARRIED?: Top: Kifah celebrates her wedding without husband Yazed by her side. Bottom: Suhad and her husband Rabee on their wedding day.

On July 31, 2003, the Israeli Knesset enacted the Nationality and Entry Into Israel Law, prohibiting any residency or citizenship status to Palestinians who live in the territories and are married to Israeli citizens. The law, initiated in the midst of the second intifada by prime minister Ariel Sharon, impacted thousands of people and forced them to choose between their families and their homes. 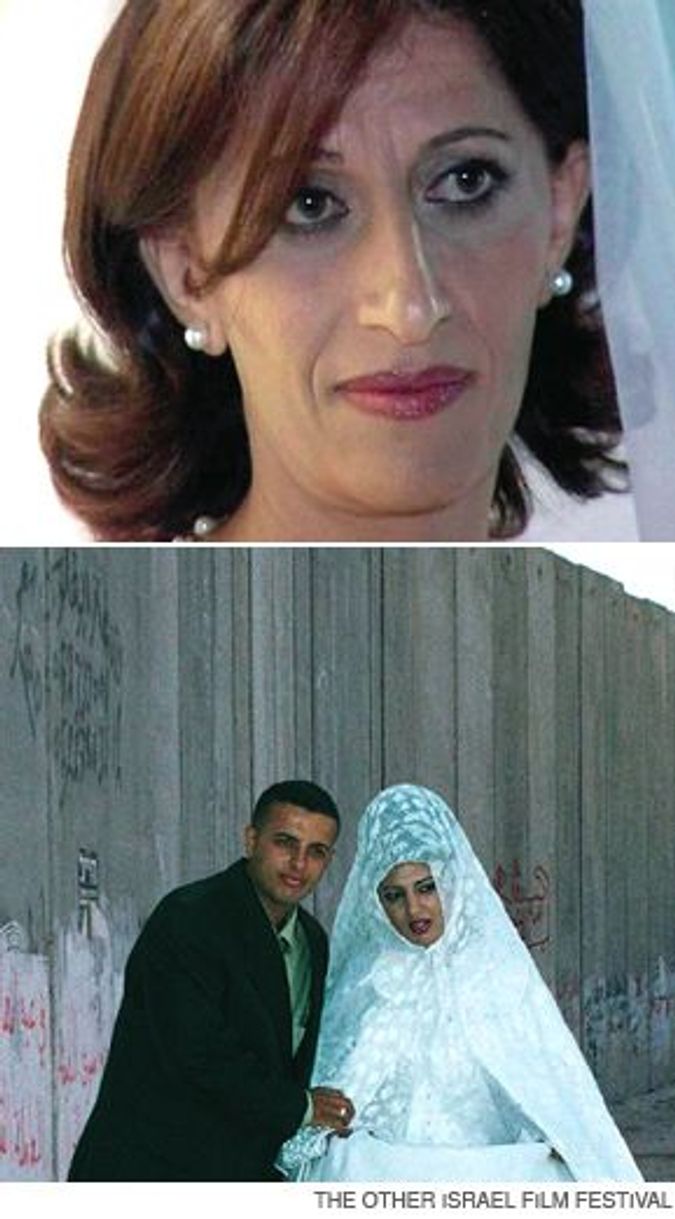 ?JUST MARRIED?: Top: Kifah celebrates her wedding without husband Yazed by her side. Bottom: Suhad and her husband Rabee on their wedding day.

Against this backdrop comes Israeli journalist Ayelet Bechar’s first feature-length documentary, “Just Married,” which was recently screened at the Other Israel Film Festival. (Full disclosure: Bechar is a recent contributor to the Forward.)

The film follows two couples, both of whom married shortly after the law was enacted, as they attempt to start their lives together under impossible circumstances.

The documentary opens with a home video at the wedding of Kifah, an Arab citizen of Israel, and her husband, Yazed, who was born in Gaza. A typical wedding scene, with bride in white, guests clapping and music playing, is interrupted by the acknowledgment that the groom is absent. According to the law, Yazed cannot travel to Israel — not even to attend his own wedding. The couple decides to live in Germany, where Yazed already resides, and so Kifah, after giving up her prestigious job at Israel’s Ministry of Culture, faces a lonely new life in a foreign country.

The film then cuts to Suhad, a Palestinian living in the West Bank, and her fiancé, Rabee, an Arab resident of Jerusalem. Unlike Kifah and Yazed, the young couple decides to live in Jerusalem illegally after they get married. The camera focuses on Suhad dozing off on the couch, lonely and isolated. As she lays low for fear of being caught, it’s as if she’s a prisoner in her own home. “I’ve moved only 10 kilometers away, but it’s like I’m in America,” she remarks glumly.

Despite the rawness of the footage and the slowness of the early pace, the authenticity of the characters and their predicaments make the film compelling in exactly the way that the Other Israel Film Festival intends. According to the festival’s founder, Carole Zabar, whose husband and brother-in-law own Manhattan’s famous Upper West Side grocery Zabar’s, the festival was created last year to expose New Yorkers to the culture and daily lives of Israel’s Arab-minority population. Ultimately, Zabar wanted to show the humanity of a population largely misunderstood.

“My overall goal is to just have people lose the attitude and see Arabs as people, part of Israeli culture, contributing to Israeli culture,” said Zabar, who spent her early 20s studying at Jerusalem’s Hebrew University and frequently returns to Israel for visits.

Though she acknowledged that she might move to make the festival more political in future years, she wanted to ease an American audience into the difficult subject matter.

“You have to be sensitive to who your audience is, and although their prejudices are not mine, I do understand where people are coming from,” she said. “You go in gangbusters and people shut down their ears; they shut down their eyes, and that’s what I don’t want.”

Indeed, the most compelling arguments against the law are the daily struggles of Kifah and Suhad, who are both torn from the comfort of their homes and from their nurturing families and thrown into unfamiliar and sometimes dangerous living conditions.

We see in the movie that women tend to be the most vulnerable of those affected, enduring emotional, professional and physical losses as a result of the law.

Kifah breaks down when she goes with her husband to a German immigration office, frustrated by her inability to understand the language and the culture around her. Earlier references to Kifah as a capable woman with a respected career contrast sharply with this scene of a woman alienated and emotionally crippled by the law.

When Suhad’s pregnancy results in premature labor, Rabee is torn between taking her to Hadassah University Medical Center in Jerusalem — which would be risky and costly because of her illegal status and lack of health insurance, but where he knows she would get the best care — and a Palestinian hospital with fewer resources. In the end, they choose the latter, and she gives birth to a baby girl at the Red Crescent maternity hospital.

Though the law was amended in 2005 to grant temporary “staying permits” (similar to tourist visas) for men and women over a certain age, these permits still do not grant rights to Palestinian spouses. In this environment, Bechar set out to chronicle the real dilemma facing countless families, and ended up telling a story about the human victims of this Israeli law.

Lana Gersten is a writer living in Brooklyn.

No Green Cards at the Green Line