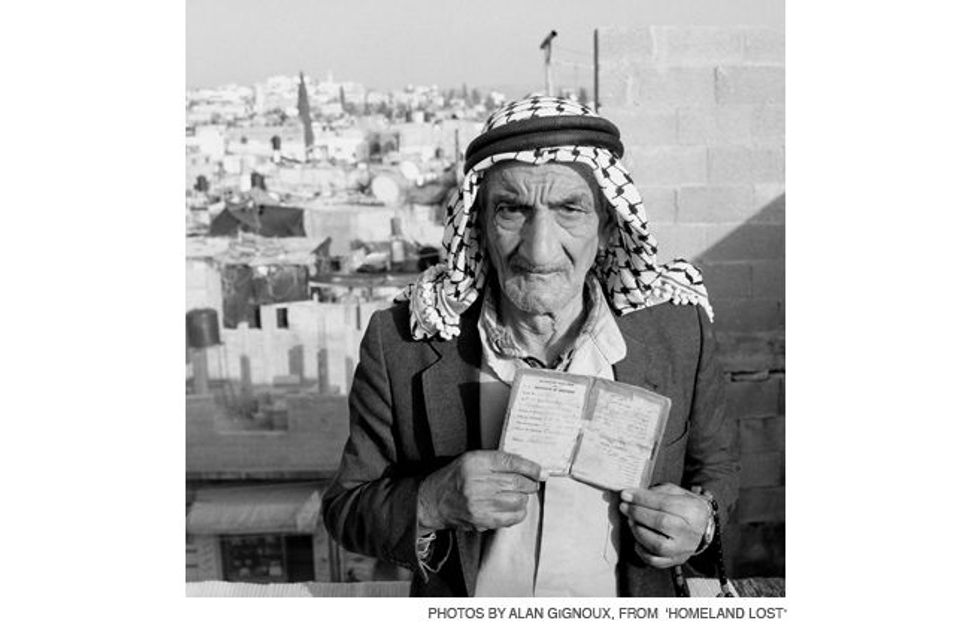 This month, Israeli moviegoers may get just a little more than they bargained for at one of the country’s best-known movie theaters. Through the end of November, the entrance hall to the Tel Aviv Cinematheque will exhibit a series of black-and-white photographs by British photographer Alan Gignoux that places photos of Palestinian refugees alongside photos of the homes they lost during Israel’s War of Independence.

Decades of media reporting about the Israeli-Palestinian conflict have largely ignored the individual experiences of Palestinian exiles, says Gignoux, who, starting in 2004, photographed and interviewed his subjects over a period of two years. The project, “Homeland Lost,” which is sponsored by East Jerusalem’s British Council, touches on a series of sensitive issues, including the meaning of a “homeland” and the “right of return,” the latter still the biggest stumbling block in the peace process. Shown for the first time in a mainstream Israeli venue, the images touch a raw nerve.

Exhibited in the year of Israel’s 60th anniversary, Gignoux’s photographs are intimate reminders of the heavy cost of Israeli nationhood that uprooted an entire population. They offer a rare glimpse into the lives of this diverse group of refugees who cut across lines of class, gender, religion and age. These are ordinary people trying to build a life for themselves often under complex circumstances. Some live in refugee camps in Lebanon and the West Bank, others in Jordan and Gaza. Some have successfully integrated into their host countries, while others have not. The elderly among them remember their homeland firsthand, and many hold on to possessions they managed to take with them as if they were precious jewels. Zeinab al’Sakah, an elderly woman, is featured in her wedding dress, the only possession she brought with her from her home in Al-Nahar; today she lives in a refugee camp in Lebanon. Several others are pictured holding the keys to their former homes, which many refugees have held on to as reminders of the residences that they lost, and in hope of one day returning.

Also included here are young men and women born after their families left the land. Sana Bkhet, who participated in the 800-meter event at the Athens Olympics in 2004, Rima Mulhim, who lives in Amman and works for the United Nations, and Hassan Al’Ialeemi, who lives in Dheisheh refugee camp in the West Bank and works as a journalist, have no personal memories of life before 1948, yet their homeland survives as a symbol.

Homes and villages all endured different fates, as have their owners. Some were destroyed immediately after the war and remain in ruins; others have been turned into Israeli agricultural sites, and one is an orphanage for Palestinian children.

No doubt these images will provoke Israelis who see them, in part because they remind these people of similar photographs taken of the Jewish Diaspora. While on the one hand they suggest the “right of return,” they also raise the question of what there is to return to. “The project speaks of the heartbreaking difficulty of facing up to the impossibility of restoring a past that has ceased to exist and raises the question of imagining an alternative future,” Gignoux writes in a description of the project.

For Cinematheque director Alon Garbuz, hosting this exhibit is a way of encouraging Israelis to begin to think about the issues.

“The problem of refugees should interest everyone in Israel, just like Jewish refugees from other countries,” Garbuz said. “What is important about the exhibit is that it makes people start thinking, because people prefer not to think at all.”

Michal Lando is a freelance journalist working from Tel Aviv.