California: Made in Germany, by Jews 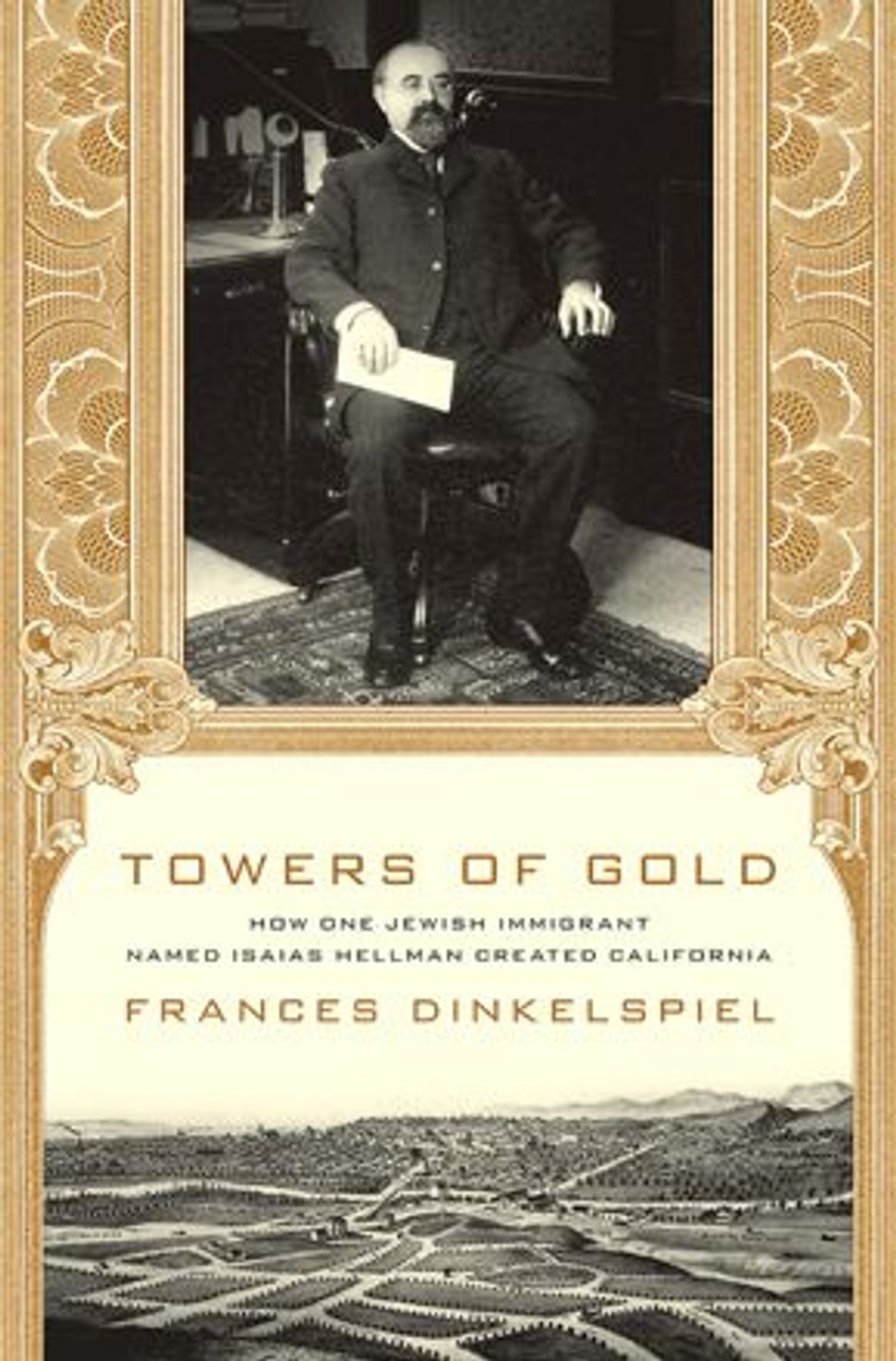 California has always been different from every other place not only in America, but also in the world. The Golden State’s human landscape has been as spectacularly varied as its natural one, a unique blending of dreamers, strivers, crackpots and hustlers. 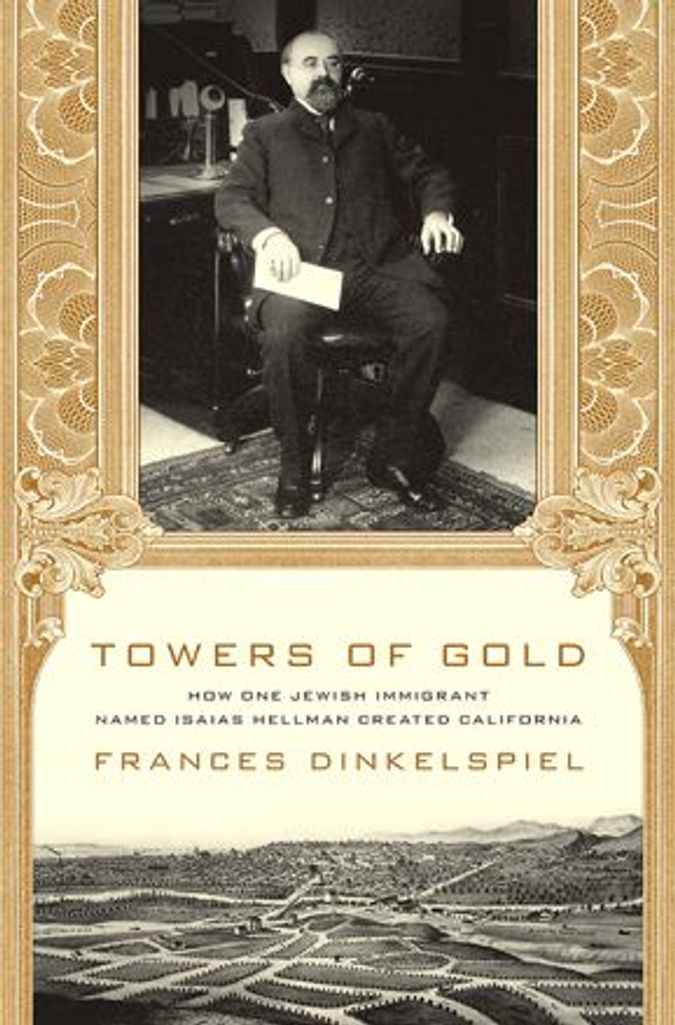 Perhaps nowhere is this historical divergence more notable than in the history of California’s Jews. Only in recent decades, Jews have ascended en masse to the middle and upper classes of society in most of America and Europe. In California, they reached the very highest levels from the state’s 1850 inclusion into the federal union.

In this regard, Frances Dinkelspiel’s “Towers of Gold: How One Jewish Immigrant Named Isaias Hellman Created California” makes a significant contribution to our understanding of this aspect of Californian exceptionalism. Dinkelspiel, who is the great-great granddaughter of her subject, provides an encyclopedic accounting of Hellman’s life. The work covers what may be called the heroic period of California’s late 19th-century emergence — the time when the state started out as a remote Mexican outpost and developed into one of the most dynamic places on the planet.

It was that very rapidity of change in California that helped open the door for the Jews. The conquest of the land from Mexico in 1848, along with the near- simultaneous discovery of gold outside Sacramento, instigated a massive influx of adventurers from around the world almost overnight. By 1852, historian Hubert Howe Bancroft noted, San Francisco was a boomtown made up of a “medley of races and nationalities,” including what he described as “the ubiquitous Hebrews.”

Indeed, by the time Hellman arrived in Los Angeles in 1859, Jewish businessmen in San Francisco were charter members of the nascent establishment. Things were moving too fast for the formation of the Brahmins or other entrenched elites common on the East Coast. Money talked, and as long as you were white you had a fairly good chance of being heard.

The California free-for-all was perfectly suited to a race whose ambitions and skills had long struggled against the arbitrary constraints of social prejudice. As one contemporary account put it: “Never since the great Egyptian exodus have the Hebrews found a soil and society better adapted to their prosperity and propagation than California…. Gold, and golden opportunities, moneymaking and freedom of thought, speech and action, they were here, and these were the Jews’ earthly paradise.”

In her early chapters, Dinkelspiel catches some of this spirit of opportunity. She starts us off at Hellman’s modest origins in the Bavarian town of Reckendorf and then takes us to his settlement in the rough-and-tumble Los Angeles of 1859. At the time, the city was a bit of a backwater — certainly San Francisco was the state’s undisputed economic capital — but Los Angeles was growing rapidly. Arriving with little knowledge of English and not much of a purse, Hellman methodically built a business empire that ultimately would play a role in the development of both Los Angeles and the whole state of California. He was a key player in businesses as varied as the trolley, oil and wine establishments of Los Angeles, and he also played a major role in the development of two of the state’s major banks, Farmers & Merchants Bank and Wells Fargo.

Hellman soon emerged as a powerful political figure, first in Los Angeles and later in San Francisco. Yet, ironically, Dinkelspiel’s story seems to fade in intensity as her subject grows more powerful and influential. By the time we enter the go-go era of the 1880s and 1890s, the text begins to read like an extended term paper, becoming tedious as it covers ground out of obligation.

At the same time, despite the book’s subtitle, many of the most interesting issues that relate to Jewish life are touched upon only lightly. We see, for state’s example, that Hellman gets on well with many powerful gentiles, such as rail magnate Collis Huntington; oil mogul Edward Doheny, and the Los Angeles Times’ second publisher and empire-maker, Harrison Gray Otis. But Dinkelspiel provides little insight into how these social relations evolved in California at a time when exclusion of Jews was widespread virtually everywhere else in the country. Little, however, is shown of what these powerful men thought of the Jewish financier or what he thought of them. The contrast with the more segregated environment of Europe, or even the East Coast, should have made some impression.

Important and fascinating issues are passed over, lost in the sea of details about Hellman’s business machinations. For example, we learn that Hellman, like many prominent German Jews of the time, vehemently opposed Zionism. Not only did he speak German at home, but he also considered the culture of his native country “superior” to that of his adopted one. Yet this theme and its implications for Californian culture — did this attitude fade or harden over time? — are not touched on earlier, when he was closer to his German roots.

Perhaps even more significantly, he was somewhat ambivalent about the growing population of generally less educated, more religious Eastern European Jews, although he readily raised money on their behalf. The attitude of the German Jewish elite toward the newcomers could have been more prominent in the book, as it resonates with the struggle of the contemporary Ashkenazic community to deal with the rapid growth of Middle Eastern, Persian and former Soviet émigré communities. Like the Eastern European Jews who later founded Hollywood — the native-born German Jews were too refined for this risky and socially suspect business — these newcomers have proved themselves highly adaptable enough to reshape California’s current frontiers, from Silicon Valley and real estate to the fashion industry.

Although these and other broader themes are not adequately explored, “Towers of Gold” still represents a valuable contribution to our knowledge of the remarkable early emergence of Jews in California. If America indeed turned out to be the Promised Land for the Jewish people, California was even more so.

Joel Kotkin is a presidential fellow in urban futures at Chapman University and the executive editor of www.newgeography.com.

California: Made in Germany, by Jews