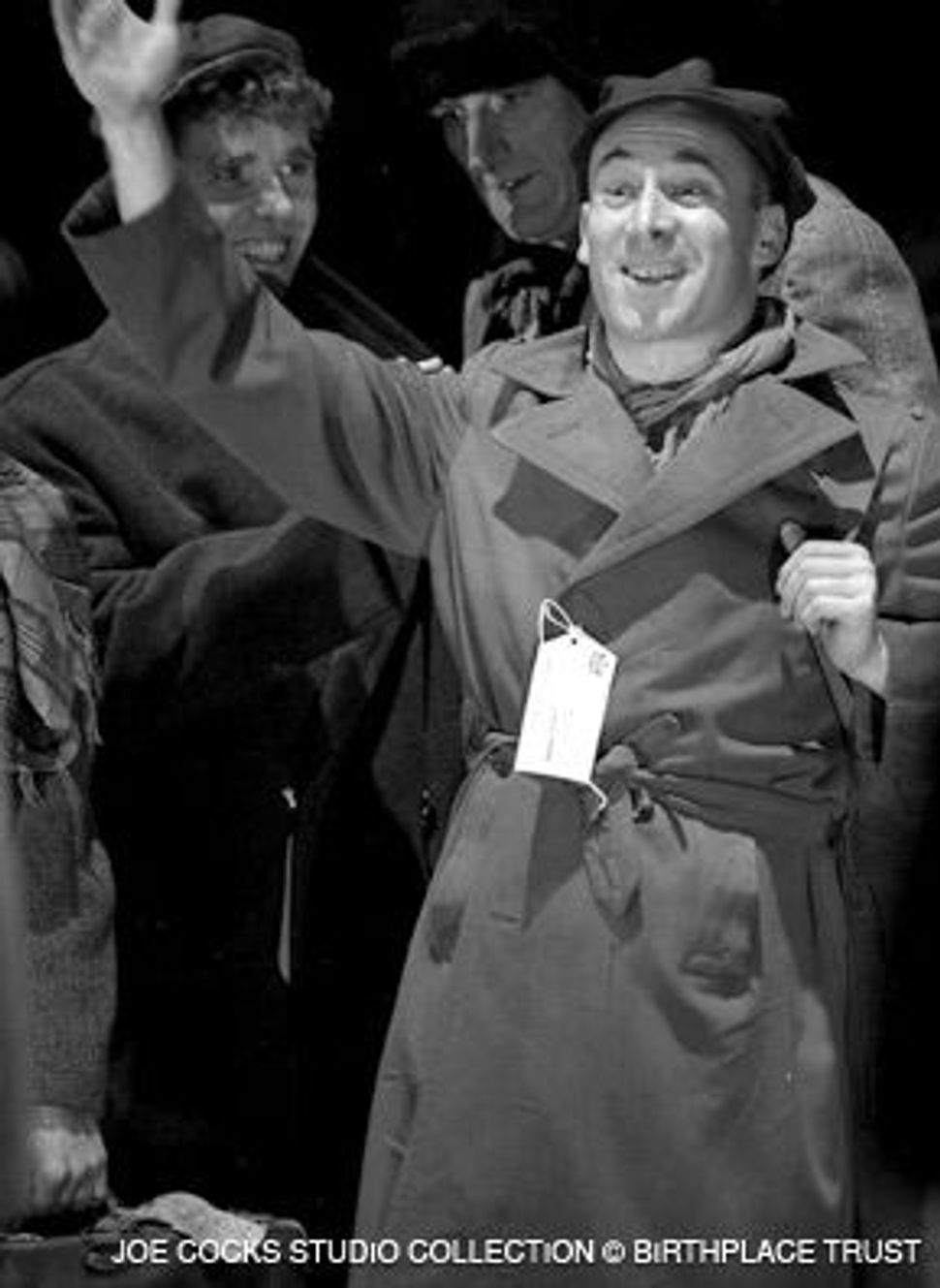 A ROSE BY ANY OTHER NAME: Linda Grant's Sandor Kovacs and Peter Flannery's Peter Singer are both based on slumlord Peter Rachman. Here Anthony Sher plays Singer in the RSC's 1989 production of Flannery's 'Singer.'

The Clothes on Their Backs 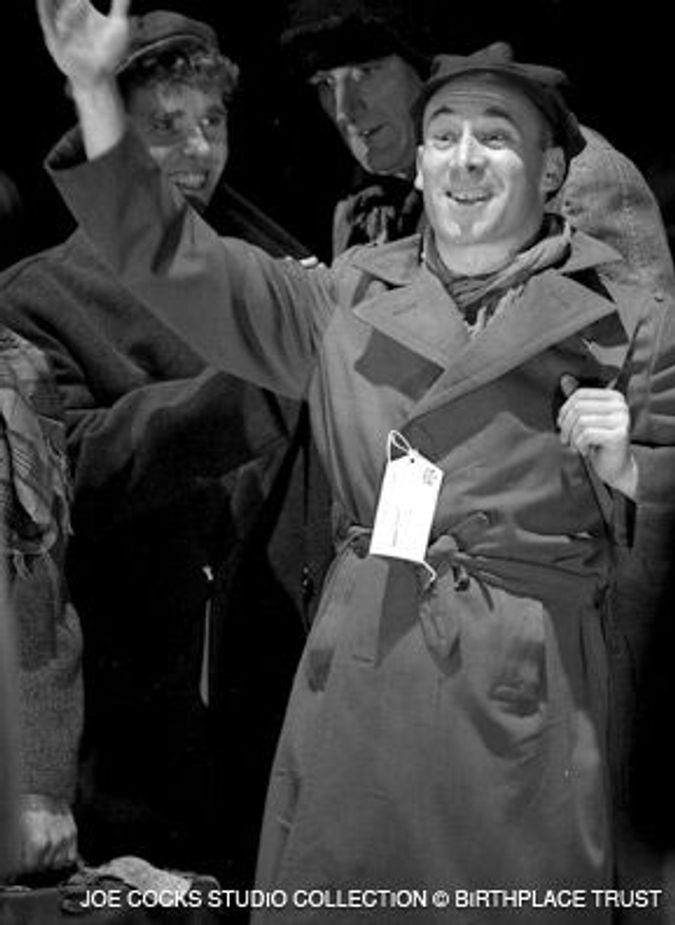 A ROSE BY ANY OTHER NAME: Linda Grant's Sandor Kovacs and Peter Flannery's Peter Singer are both based on slumlord Peter Rachman. Here Anthony Sher plays Singer in the RSC's 1989 production of Flannery's 'Singer.'

Toward the end of Philip Roth’s poignant story “Eli the Fanatic,” Eli, exhausted by his fruitless efforts to get a Hasidic yeshiva to leave his nicely acculturated Jewish neighborhood, decides to adopt a different strategy. He wraps his Brooks Brothers suit in a box and delivers it to one of the yeshiva’s founders, a man who has made residents uneasy by wandering around town looking like he just stepped out of a shtetl. Eli hopes his gift will compel the Hasid to abandon his traditional garb and blend in with the rest of the community: “Common sense says make this guy change his clothes. Then maybe—.”

Eli doesn’t complete the sentence, but he doesn’t need to. The implications are clear: Clothes are an extension of the self, and if you start by changing a man’s clothes, it may lead to a deeper transformation.

Few understand this better than British writer Linda Grant, who writes, in such publications as the Guardian, the Daily Telegraph and Vogue — as well as in her blog, “The Thoughtful Dresser” — about clothes and what they mean. Her recent articles range from mourning the end of dress codes in restaurants, to revisiting the shock of Dior’s “New Look” (an “extravagant fairytale collection” for postwar France), to reviewing a recent biography of the queen’s dresser, Norman Hartnell. Each seeks to give clothes relevance by locating fashion in the broader context of culture. “What you wear,” Grant wrote in the Guardian, is “as relevant as the architecture, the decor, the food on the table, the scents in the air.” Roth’s tale manages to achieve such an equivalence. We are made to believe that without his clothes, a man is “nothing,” as one character says. And a simple exchange of suits, as Eli enacts toward the end of the story, turns out to be as existential as any meeting of minds.

In her fourth novel, “The Clothes on Their Backs,” Grant similarly tries to make clothes relevant in a story about Jewish immigrants to England around World War II, but is only partially successful. The Jewish refugees and mistreated immigrants who form the core of this interesting but deeply flawed novel have all been beaten down by hardship, and turn to clothes not to blend in, but for the same reasons that others turn to fantasy — a world of pleasure and disguise that their own lives lack. The narrator rummages through secondhand stores for crepe de Chine cocktail dresses, and her Uncle Sandor, a Hungarian refugee at the heart of the story, parades down London streets in mohair suits.

Grant hopes to explore our assumptions about what suffering does to people, and to question the nature of evil. In so doing, she challenges us to rethink a commonly held belief that suffering leads to virtue, but her characters do no more than scratch the surface of these issues. “We call Nelson Mandela and Primo Levi heroes because the rest of us can’t behave like that,” Grant said in a recent interview. At the center of her novel are two brothers who are anything but heroes and whose different responses to adversity constitute Grant’s attempt to deal with evil and the transformative power of suffering.

Ervin and Sandor are brothers torn apart by war and revolution and radically divided by temperament. Sandor spends the war years in Hungary as a slave laborer, while his brother manages to escape. Eventually they both arrive in London as refugees, but they respond to their plight in diametrically opposite ways. Ervin lives like a “mouse,” slaving away in the back of a jeweler’s shop, wondering how the war failed to turn his brother, a vilified slumlord and boulevardier, into a more virtuous man.

Grant modeled Sandor, the book’s central figure, after the notorious Notting Hill slumlord Peter Rachman who survived the war in a Siberian labor camp before arriving in London in 1946. Rachman also served as the model for Peter Singer, the eponymous protagonist of Peter Flannery’s 1989 play who survives Auschwitz by black-market trading before quickly establishing himself in London as a slumlord racketeer. Flannery’s Singer repents and re-emerges as a charitable citizen who doles out food to the city’s unfortunates. Grant clearly had Singer in mind, but Sandor, unlike Singer, undergoes no such transformation. “It’s true, not nice things happened to him,” Ervin says at one point. “Still they could have made him a better person and they didn’t.” Rather than turn Sandor into a hero, Grant tries instead to shape our understanding of him.

The book is told from the perspective of Ervin’s daughter, Vivien, who triangulates the two brothers. She ends up transcribing her uncle’s story despite her parents’ efforts to shield her from Sandor. For Vivien, it’s an opportunity to learn her family’s history, which her own father tries to hide. The fact that she has undergone a baptism covers up her Judaism. “Until a week ago I too was a person without a history, but my uncle changed all that,” she says in a moment of self-reflection. For Sandor, these sessions with his niece are a chance to defend himself and his “terrible deeds,” and to indirectly reconnect with his estranged brother.

Vivien’s own story — a childhood in the shadows of her parents’ ascetic life, a short-lived marriage and a stint as a political activist during the rise of the National Front — trades off with her uncle’s, but it is he who ends up occupying our attention. Grant intends us to identify with Vivien and to be “reluctantly drawn deeper and deeper into Sandor’s world” despite evident “dislike for this vile man.” He challenges her notions of “fairness” and morality, says that her ideas of decency, respect and equality are “for babies” and argues that his actions pale in comparison with what was done to him. Most of all, he offers her a lively alternative to the “decades of self-immolation” that her father imposed upon himself and the family.

Though neither strictly a villain nor a hero, Sandor is extreme in his own way, as is his brother, who is used largely as a comparison point and never really comes to life on his own. So extravagant is Sandor, and so slavish is Ervin — one parades, the other hibernates — that neither ends up being particularly convincing. The two brothers come together only twice, and then only with absurd, almost cartoonish insults. This does more to turn them into caricatures than into the multidimensional characters Grant needs them to be.

Perhaps the problem is, in part, that the book relies too heavily on a historical account, forgetting that fiction requires that additional leap of faith to create something new. Without surfaces there are no depths, Grant suggested in a recent interview. That said, surfaces are also capable of distracting more than they reveal, as illustrated by numerous descriptions of clothes in Grant’s book. Where Roth manages to make clothes central to the story’s larger themes, here they seem tangential. The characters in Grant’s book, and their dialogue, could stand to be looser, freer to move beyond the boxes they’ve been assigned. As they are, they make poor guides to the ambitious questions challenged by the book. Explorations of suffering and of the nature of evil are the material from which great books are built, but only when the characters are up to the task.

Michal Lando is a freelance journalist working from Tel Aviv.