The Man With the Yellow Star: The Jewish Life of Serge Gainsbourg 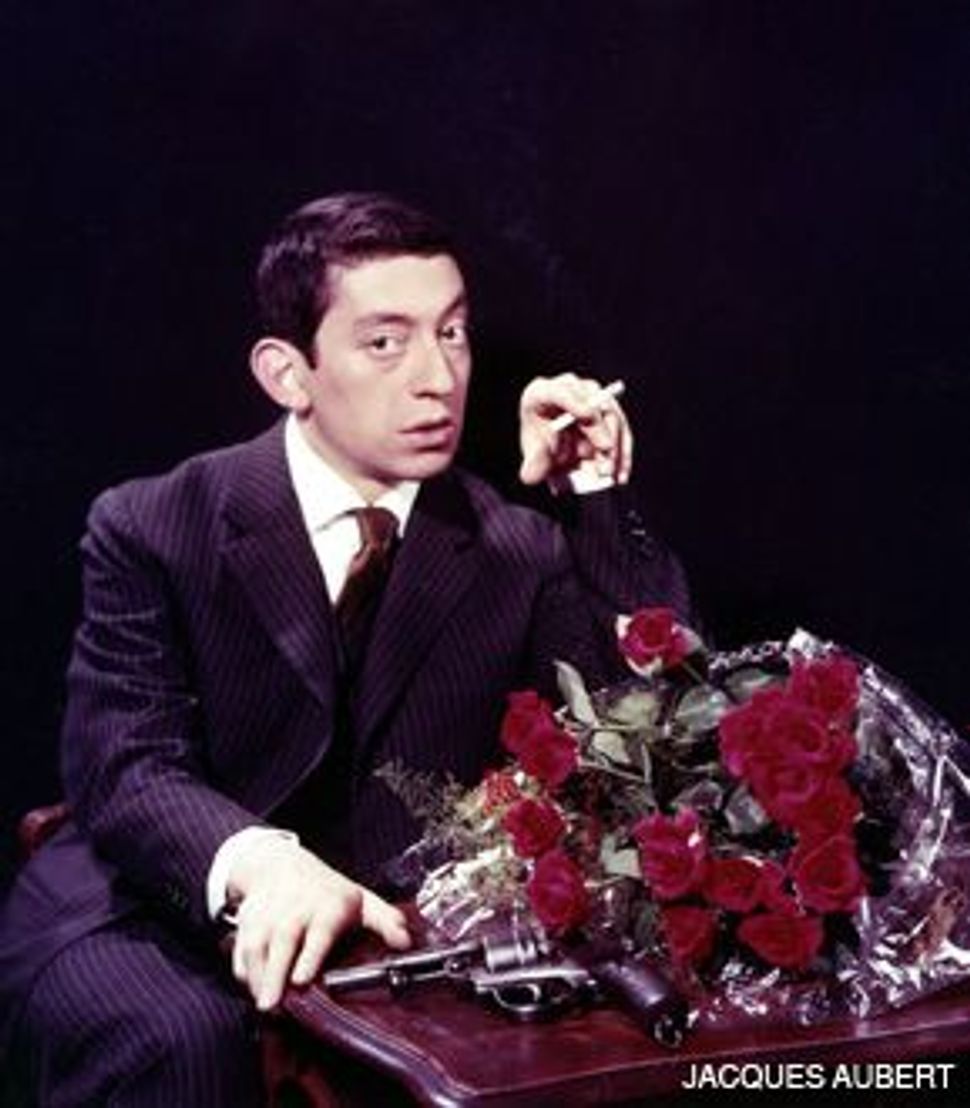 GUNS AND ROSES: Decades before Axl Rose, Serge Gainsbourg was living a life of extreme, if elegant, depravity.

Visitors to Paris may have noticed, in an otherwise ritzy neighborhood in the posh seventh arrondissement, a small building at 5 bis Rue d e Verneuil that is abundantly covered in garish multicolored graffiti. It is the home of the late French singer/songwriter Serge Gainsbourg (1928–1991), born Lucien Ginsburg in Paris’s humble 20th arrondissement. His Russian-Jewish parents fled the 20th arrondissement after the 1917 revolution. In France, for what would have been the year of Gainsbourg’s 80th birthday, public concerts and CD box set reissues from Universal Music France abound, while “Gainsbourg 2008,” a vast new exhibit at Paris’s Cité de la Musique, runs until March 2009, the year in which a feature film biopic directed by artist Joann Sfar is scheduled to premiere. “Monsieur Gainsbourg Revisited” a 2006 English-language tribute album starring such celebrities of today as Beck, Michael Stipe, Jarvis Cocker, Marianne Faithfull and Carla Bruni (now better-known as Madame Sarkozy), mainly emphasizes Gainsbourg’s notorious chic decadence, dissipated nocturnal revels and drunken behavior in public and private, yet the new commemorations situate him more as a creative spirit stuck in a particular history. 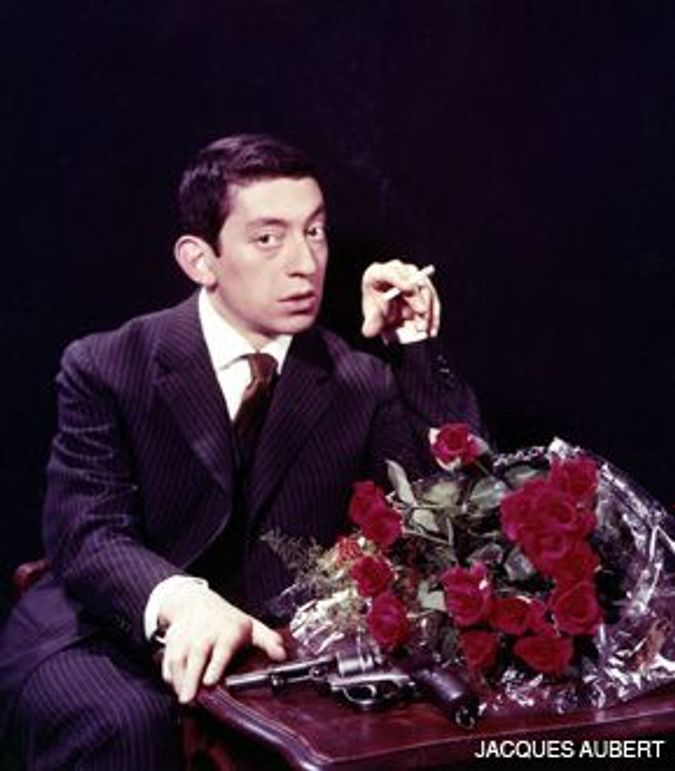 GUNS AND ROSES: Decades before Axl Rose, Serge Gainsbourg was living a life of extreme, if elegant, depravity.

For Gainsbourg, his role in that history was undoubtedly affected by his impoverished origins. Another current museum exhibit, displayed at Lille’s Maison Folie Moulins until December 21, is devoted to a single Gainsbourg song, “Le Poinçonneur des Lilas,” (“The Ticket-Puncher at the Porte de Lilas Métro Station”) written 50 years ago about the dismal life of a downtrodden subway ticket puncher. In this song, Gainsbourg depicted a soulless cityscape in a tone that the weekly Nouvel Observateur has compared to that of Walter Benjamin, Charlie Chaplin and even Baudelaire. Yet, Gainsbourg’s most enduring personal influence was doubtless his childhood experiences during the Nazi occupation of France.

In his 1975 album, “Rock Around the Bunker,” the song “Yellow Star” (Gains–bourg was obsessed by Anglophone culture, from Hollywood films to Gershwin tunes) recalls how it felt to be a young Jew wearing the obligatory Yellow Star in the streets of wartime Paris. Alluding ironically to the badge’s resonance as a prize (“I’ve won the yellow star”) and a badge as sported in Western movies by a “sheriff or marshal or big chief,” this bittersweet recollection concludes that the “law of struggle for life is difficult for a Jew.”

This tone veers suddenly into the raucously sardonic in other songs on “Rock Around the Bunker” like “Tata Teutonne” (“Teutonic Auntie”), about a transvestite named Otto, and especially “SS in Uruguay,” describing Nazis hiding in postwar South America. Using a lyricist’s prerogative, Gainsbourg selected Uruguay as the refuge for his song’s Nazis, apparently because of the sound of the country’s name, since other South American destinations, especially Argentina, were even more notorious for shielding Germany’s war criminals.

Following World War II, Gainsbourg, who eventually escaped with his family to Limoges, in France’s free zone, seems to have suppressed his memories of these events for decades. His first job after returning to Paris was at Villa Champsfleur, a suburban Jewish school for the surviving children of murdered deportees at Mesnil-le-Roi, run by a local rabbi under the auspices of the Jewish Labor Bund. There, Gainsbourg gave the children lessons in music and drawing and began to write songs. The survivor stories he heard there were recalled fully three decades later, and after years of producing pop songs about Harley Davidson motorcycles and Bonnie and Clyde composed for his then-girlfriend, Brigitte Bardot, Gainsbourg suddenly returned to the theme of Judaism.

In 1967, on the eve of the Six Day War, a cultural attaché at Paris’s Israeli Embassy contacted Gainsbourg to commission a military march to a text that was to be translated into Hebrew. Gainsbourg recorded the brief, dirge-like “Le Sable et le Soldat” (“Sand and Soldier”) to organ accompaniment and sent the tape to Tel Aviv, where, unused, it slumbered for 35 years in the archives of Kol Israel radio. Rediscovered only a few years ago by a fan, the recording, still officially unpublished and unreleased, has become a YouTube favorite, with its atypically serious lyrics: “Yes, I will defend the sand of Israel, the land of Israel, the country of Israel….” Gainsbourg adds, with a rhetorical flourish: “Tous les Goliaths venus des pyramides/Reculeront devant l’étoile de David” (“All the Goliaths emerging from the pyramids/will back away from the Star of David”).

Gainsbourg, however, never actually visited Israel, and usually referred to his parents’ Russia as his spiritual homeland. His 1981 song “Juif et Dieu” (“Jew and God”) lists Russian-Jewish revolutionaries, like Grigory Zinoviev (1883–1936), Lev Borisovich Kamenev (1883–1936) and Leon Trotsky (1879–1940). The song also notes the Judaism of Karl Marx and Albert Einstein, but seems to particularly relish pointing out in rhyme that Jesus “n’avait rien d’un Aryen” (“had nothing Aryan about him”).

“Juif et Dieu” offers a catalog of creative and revolutionary Jews, a group to which Gainsbourg clearly felt he belonged. Given the ambient antisemitism in postwar France, even if Gainsbourg had not felt his Judaism so acutely, it would have been pointed out to him by critics. Indeed, this kind of showdown occurred in 1979, after Gainsbourg recorded “Aux Armes et Cætera,” a reggae version of “La Marseillaise,” France’s national anthem. Noted journalist Michel Droit furiously claimed in an article that Gainsbourg’s irreverent song might cause a new rise in antisemitism. Though Gainsbourg’s references to his own Judaism usually were ironic jests, as when he would repeat old riddles — “You know what sank the Titanic? Iceberg! Once again, a Jew is to blame!” — he reacted quite seriously to Droit’s diatribe, accusing the journalist of “latent anti-Semitism.” Undauntedly facing jeering crowds of right-wingers and soldiers when Gainsbourg sang “Aux Armes et Cætera” in public was probably his finest hour.

Gainsbourg certainly could be pointlessly rude in public, especially when inebriated. His songs could be salacious, like the overheated 1969 love duet “Je T’aime, Moi Non Plus” (“I Love You; Neither Do I”), or the bizarre and icky “Lemon Incest” (1984), the latter recorded with his then-pubescent daughter Charlotte, who is now a major film star and wants to make her father’s Rue du Verneuil home into a museum. At 80, the yellow star of Gainsbourg, albeit still replete with decadent chic, shines forth more brightly than ever.

The Man With the Yellow Star: The Jewish Life of Serge Gainsbourg