Man in Search Of Language 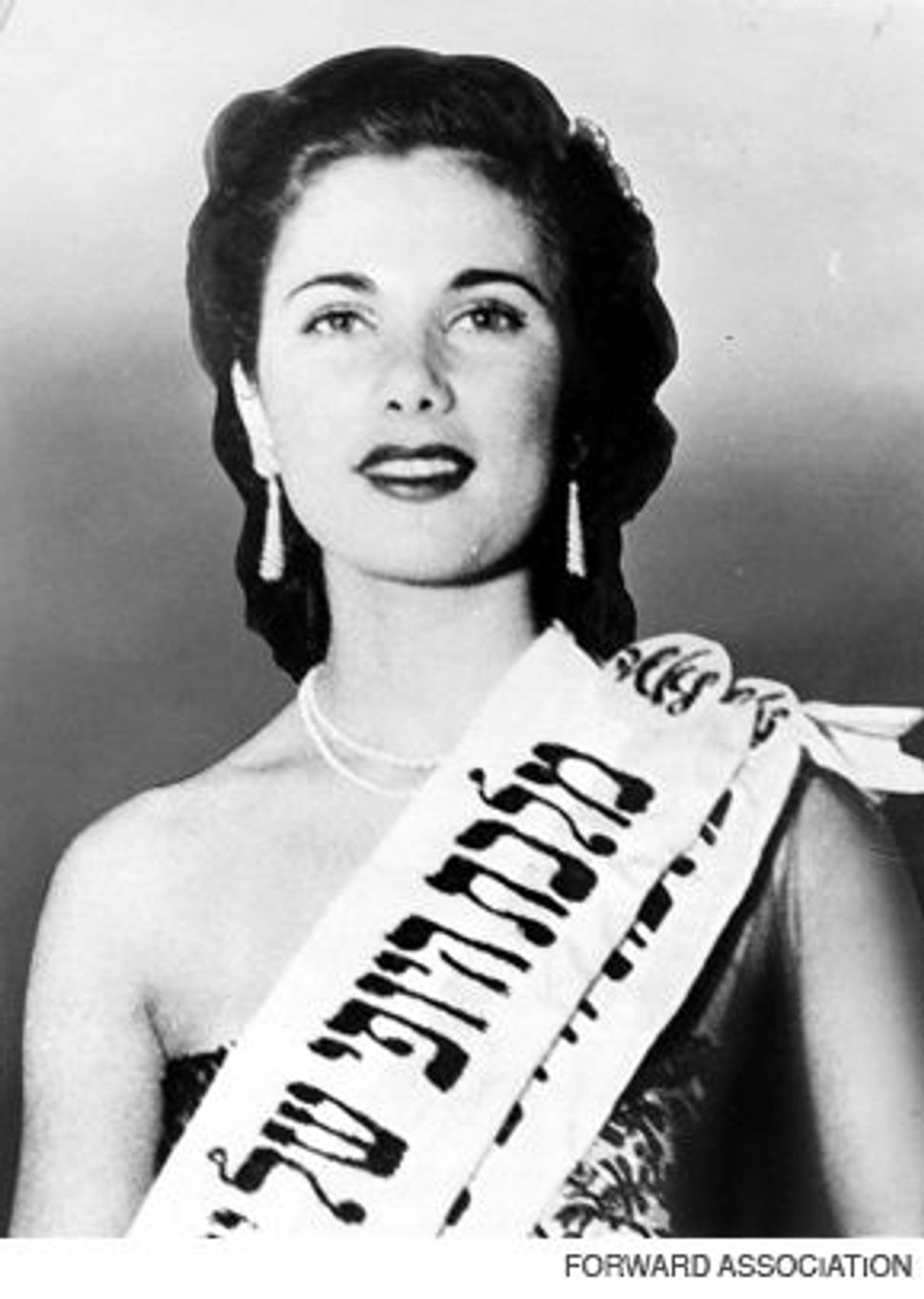 MALKAT HAYOFI: Every living language needs a word for beauty queen. This beauty queen is Michal Harel, Miss Israel 1952, kindergarten teacher and stalwart defender of the City of David during the 1948 siege of Jerusalem. 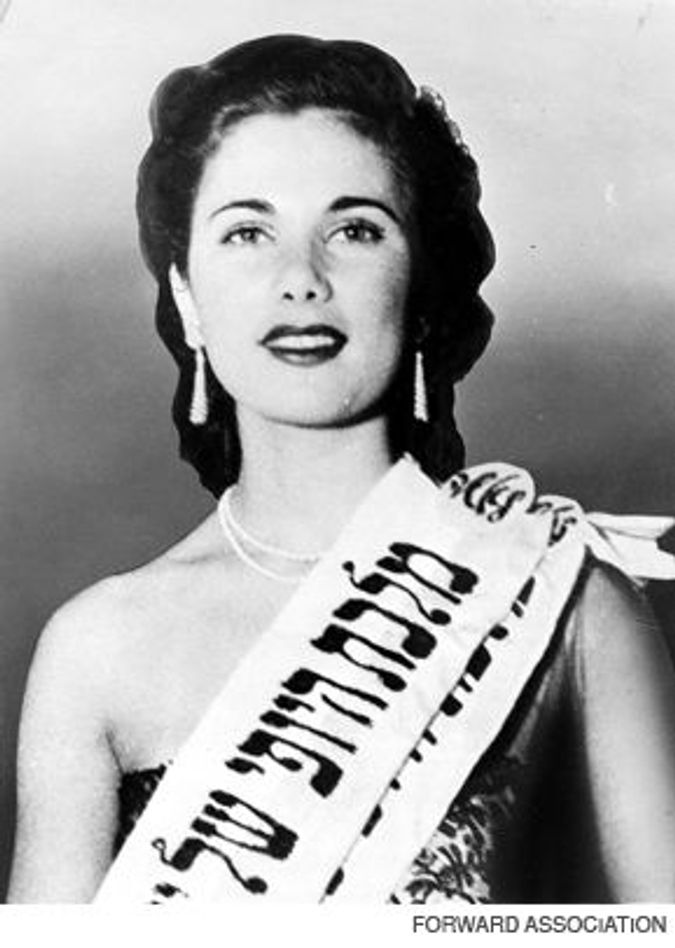 MALKAT HAYOFI: Every living language needs a word for beauty queen. This beauty queen is Michal Harel, Miss Israel 1952, kindergarten teacher and stalwart defender of the City of David during the 1948 siege of Jerusalem.

The book reminds me of a small jazz ensemble playfully jumping from theme to theme. The leader graciously grants his fellow musicians their solos — much of the book consists of dialogues between Stavans and a multitude of characters, including teachers, waiters, taxi drivers, lexicographers, rabbis, and kibbutzniks — but remains the focus, even when he physically wanders toward the wings. At times, however there is just too much Stavans, leaving one longing for a more conventional, perhaps symphonic, historical account of the emergence of modern Hebrew.

The Mexican-born grandson of Eastern European immigrants, Stavans was educated in a Yiddish school in Mexico City, spent a year in Israel — long enough to acquire a good grasp of Hebrew — and subsequently made his career in the United States as a journalist and later professor of literature. He is a prolific scholar and popular writer on diverse topics in Spanish-language and Jewish literature and culture and, in particular, the overlap between these areas.

The idea for the book emerged from a perplexing dream that motivated Stavans to explore his relationship to Hebrew and, along the way, understand how the language’s re-emergence connects to modern Jewish identity in Israel and the Diaspora. His dream seemed to indicate that he was losing his Hebrew and, with it, his soul. Writ larger, the dream suggested to Stavans that Hebrew is at the heart of Jewishness, of what makes us different from all other peoples. Writ smaller, it provided the excuse for traveling to Israel to discuss with a wide variety of Israelis the revival, evolution, and current state of Hebrew. The book is both frustrating and illuminating, much like the dream animating Stavans’s quest.

The narrative device of Stavans’s search is the book’s central weakness and, surprisingly, also its strength. Organizing the book around a journey accounts for its fluttering from topic to topic, and its lack of a focused argument. However, through Stavans’s dialogue with Israelis, we do get a sense of the difficulty of creating a Hebrew that could accommodate the modern world after having been in a state of suspended animation for nearly 2000 years as the spoken language of prayer and the written language of scholars.

The legend and legacy of Eliezer Ben-Yehuda forms the narrative’s other major touchstone. In popular legend, Ben-Yehuda, born Eliezer Yizhak Perelman in Russia, is credited with single-handedly re-creating Hebrew as a modern language: raising the first child to be spoken to exclusively in Hebrew, tirelessly advocating for public and private life to be conducted in Hebrew, and compiling the first Hebrew language dictionary. Motivated by Zionist ideology, he collected and coined words that only had Semitic roots. Partly as a result of this rigidly ideological approach, most Israelis consider Ben-Yehuda’s renowned dictionary a white elephant, “stuffed with obsolete words that nobody in Israel has use for today.” Stavans points out that Ben-Yehuda’s dictionary was aimed not so much at determining the parameters of an already mature language, but rather at providing future Hebrew speakers with pre-approved possibilities.

Stavans suggests that while ordinary Israelis are generally ignorant or skeptical of Ben-Yehuda’s work, more educated ones tend to be critical of it, downplaying the heroic legend of Ben-Yehuda by noting that he was part of a broader movement that led to the re-emergence of Hebrew. However, again the broader context is lacking. We do not learn much about this movement, its institutions and protagonists, or the particular challenges it faced and overcame. Indeed, even the portrait of Ben-Yehuda’s own milieu is thin. For example, Ben-Yehuda’s first wife Dvorah was as committed as Ben-Yehuda to speaking only Hebrew to their first child. Yet Stavans does not tell us how she became conversant in Hebrew, a language that women of her time did not typically learn.

Yet, what the book lacks in rigor it makes up for in imaginative leaps and surprising connections. (And some fascinating trivia: Chances are that you have never heard of some of the languages spoken in Israel that Stavans lists on page 78.) For instance, a long section on Jorge Luis Borges’s story “The Aleph” and the Hebrew letter aleph does not really follow from what precedes it, yet it is richly rewarding. Stavans discusses Borges’s fascination with Jews and the esoteric, including his decidedly ahistorical view of Jews and Judaism. After examining “The Aleph” — including a lengthy quote from its dizzying climactic passage — Stavans offers an absorbing exploration of the letter’s importance in Jewish mysticism. Stavans then circles back to his point of departure: “It dawned on me that Israel itself was a sort of Borgesian aleph. All things Jewish were conflated in it. The nation was a sum of Diasporic parts, a site where the universe entire is contained.”

This, in turn, obliquely sheds light on the section that preceded it, which discusses the relationship between Yiddish and Hebrew, and the decidedly ambivalent, even hostile, attitude of the Hebrew-speaking nation to the Yiddish language. Official recognition of the importance of Yiddish to Jewish life is grudging. Like the presence in Israel of Sholem Aleichem as Stavans divines it through a visit to a Tel Aviv museum commemorating his life and work, Yiddish in Israel feels “parenthetical.” Israel may be the Jewish world’s aleph, but not all elements in it are equally valued.

The looseness of the book’s structure, the playfulness and omnivorous appetite of its author, mirror Stavans’s insistence on the fluidity and ever-changing nature of language. Perhaps this notion is best illustrated by a long passage about the state-run Academy of the Hebrew Language. Stavans both respectfully details and pokes gentle fun at the Academy’s painstaking and quixotic quest to systematically categorize all Hebrew words written prior to 1948 — a sample entry shown to Stavans consists of 75 pages of text — and questions its exclusion of spoken Hebrew and slang. Noting ordinary Israelis’ embrace of linguistic fluidity (the incredible popularity of a recent dictionary of Israeli slang being Exhibit A), Stavans asks the vice president of the Academy if he believed Israel could do without the Academy. “Sure,” came the reply, “The nation doesn’t need it!”

But what of Stavans’s personal quest? At what conclusions does he arrive? The most important one is that his search for Hebrew was “for something far more multifarious than a language. The Hebrew of my dream wasn’t only a system of sounds; it was an existential condition, a way of being, of establishing contact with others, with God, and with myself.” Yet he does not argue that Hebrew alone should be the language of the Jewish people, nor that it is necessary for making these connections. On the contrary, he notes that he spoke many other languages in his quest to learn about Hebrew, that “the restlessness that pushed me to meet another conversant somewhere in the globe, made me a Diasporic Jew,” a designation he celebrates rather than shuns.

Stavans further asserts that the feeling of being an outsider, even if one is monolingual, is at the heart of Jewish experience. In conversation with the Polish-born Canadian writer and psychologist Eva Hoffman, Stavans claims that all Jews, even monolingual ones, have a “schizophrenic” relationship to language. By this term, he seems to mean that their difference from the majority culture forces Jews to attune themselves to the nuances of that culture, its underlying mechanics, in order to “translate” it for themselves.

This example seems another claim too far for Stavans. Being an outsider is at the heart of Diaspora life, but that does not seem to me to cause any linguistic schizophrenia in monolingual Jews. Rather, I would argue that, to continue with Stavans’s psychological terminology, many harbor feelings of inadequacy with respect to our inability to speak or read Hebrew and that this feeds a sometimes acknowledged inferiority complex with respect to our Israeli cousins.

But the reader should not feel a need to square all of Stavans’s circles in order to enjoy the journey. Stavans notes toward the end of the book that he believes that some parts of his dream had become intelligible and others had not. By the same token, “Not everything in life has to be coherent.” As in a dream, as in life, so in this book: there is much to be gained from Stavans’s imaginative leaps that bump up against the limits of the coherent.

Man in Search Of Language