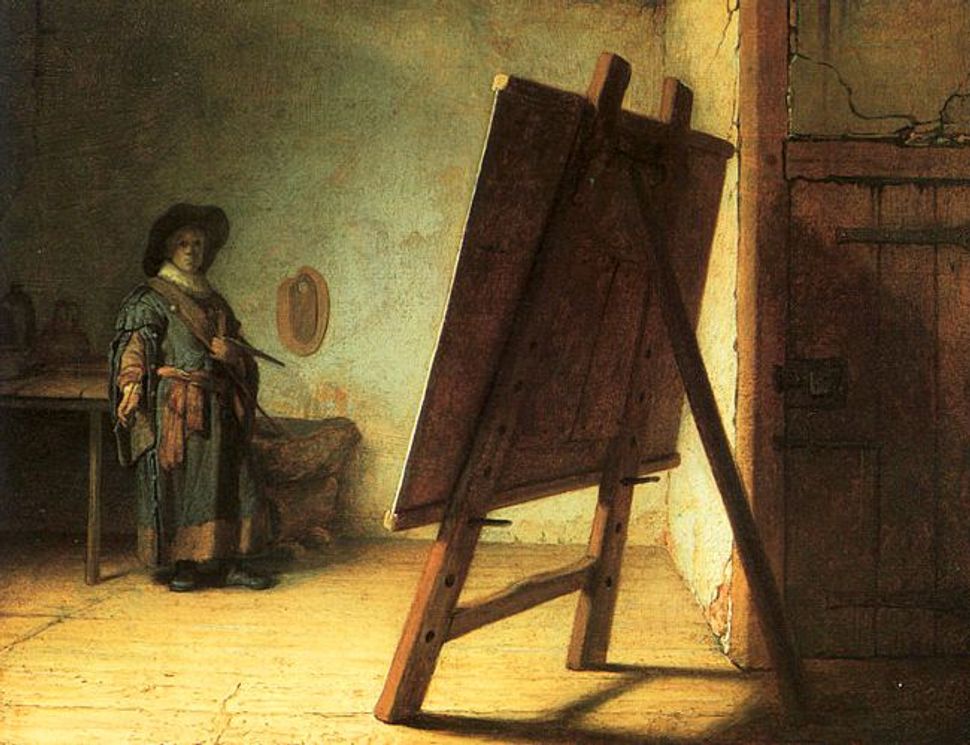 In Paris, art gazers have been lining up in droves for “Picasso and the Masters,” this season’s blockbuster show at the Grand Palais. There’s also “Picasso and Manet” at the Orsay and “Picasso and Delacroix” at the Louvre. Never before has the mighty Spaniard’s communing with — and cribbing from — great artists of the past been so massively documented.

Artists constantly crib from one another, as Jonathan Lethem argued in a 2007 Harper’s essay called “The Ecstasy of Influence.” Nabokov did it, T.S. Eliot did it and Bob Dylan did look back. Like legions of other artists, they added value to what they took. Quoting Thomas Mann, Lethem calls this process “higher cribbing.” But would Lethem give a pass to the kind of cribbing lurking in a New Yorker essay that appeared in March 2007, a month after his own? Written by superstar academician, author and journalist Simon Schama, it’s called “Rembrandt’s Ghost,” subtitled “Picasso Looks Back.”

Schama’s article traces the way that Picasso riffed, overtly and covertly, on Rembrandt’s art, especially in old age. It’s an impressive feat of interpretive sleuthing, but most readers won’t realize that it wasn’t Schama who did the deep digging. That had already been done in a much longer essay, called “Picasso’s Dialogue With Rembrandt’s Art,” published in “Etched on the Memory,” the catalog for an exhibition at Rembrandt House in Amsterdam in 2000. Its author, Janie Cohen, is director of the Robert Hull Fleming Museum at the University of Vermont. She also happens to be my wife’s first cousin.

Her essay, never published in the United States and immune even to Google searching, can be called, fairly, obscure. But close and, it should be noted, explicit attention had been paid to it by Schama, who extensively relied on it. Twice in his own essay, Schama briefly credits Cohen, but a comparison of the two texts still raises certain questions: Did Schama reveal the true extent to which his own article relied on the work of a person not nearly so famous as himself? And, if Cohen’s article had been posted on the Web, where curious readers of Schama’s article would have noticed the similarities, would Schama have had second thoughts about the extent of his borrowing? Or maybe it is a fault of the looseness of the journalistic genre: Had Schama been writing as a scholar instead of as a journalist, would he have properly footnoted Cohen’s work?

Cohen was first alerted to the impending New Yorker article by a call from a researcher at the magazine. Could she be of help in sourcing illustrations to be used in Schama’s article? Yes, she could. Obviously, it was flattering to see one’s work revived in the pages of The New Yorker. Still, a caution-tinged e-mail went out to family and friends (including those of us who hadn’t known of her essay):

“Hi All! I’m writing to let you all know that in the March 26 issue of The New Yorker, there’s an article by author/historian/art historian Simon Schama entitled ‘Rembrandt’s Ghost’ that presents my work on Picasso’s borrowings from Rembrandt’s art. He cites me twice, although the crediting is rather vague considering how much he’s borrowed from me… a little too much horn-blowing on my part, but I wanted to share my Warholian 15 minutes of fame…!”

Those borrowings (from Cohen, not Rembrandt) begin in Schama’s opening paragraph:

“In April, 1973, the month that Picasso died, he was asked to choose an image to be used as a poster for a show of recent work at the Palace of the Popes in Avignon. He picked ‘The Young Painter,’ an oil sketch he’d done a year earlier at the age of 90 — a vision of his dewy beginnings, not his bitter end.…The apple-cheeked youth recalls another young painter at the outset of his career, the 23-year-old Rembrandt, picturing himself and his calling around 1629 … the faces are unmistakably similar: … eyes stylized as ogling black holes as if drawn by a child. The captured moment in both images is solemn; the young men pause before their work, brushes in hand, as if locked in a trance….

That reads like Schama’s own interpretive spadework — exactly the sort of insight one expects from the author of “Rembrandt’s Eyes,” a 750-page exploration of the painter’s work (albeit mentioning no connection between Rembrandt and Picasso). In fact, that opening paragraph echoes this passage from Cohen’s essay, based on original research she’d done decades earlier as a young graduate student:

“From April 14th, 1972 dates ‘The Young Painter’: a youthful artist… stands with paintbrush poised, gazing with timid eyes at what must be the canvas before him. We are reminded of the young painter standing before his easel in one of Rembrandt’s early oils, ‘The Artist in His Studio,’ considered a self-portrait. Conspicuous in both canvases are the dark, dot-like eyes… the expression of the young Rembrandt, a mixture of hesitancy and expectation, has been intensified in Picasso’s figure, resulting in an unusually tender image that seems infused with memories of youth and hope… Picasso chose this painting for the poster of an exhibition of his recent work to be held in Avignon in May, posthumously, as it turned out.”

Schama’s opening paragraph ends with an unattributed Picasso quote, also found in Cohen’s essay: “I don’t paint what I see, I paint what I know.” She cites photographer and filmmaker Edward Quinn as its source. It’s one of six quotations in “Rembrandt’s Ghost” to be found in Cohen’s monograph. Schama’s second paragraph includes a trio of three factual nuggets: 1) Picasso owned “all six volumes of Otto Benesch’s edition of [Rembrandt’s] drawings,” 2) “it was Rembrandt of whom, according to his friend and biographer Pierre Cabanne, he spoke ceaselessly,” and 3) Picasso “mixed it up with, among others, Grunewald, Poussin, Cranach, Velesquez, Goya, and El Greco.” All these facts appear in Cohen’s essay.

Schama’s belated first nod to Cohen comes in his third paragraph: “Rembrandt first appeared in Picasso’s visual imagination in the 1930’s, as Janie Cohen points out in her essay ‘Picasso’s Dialogue with Rembrandt’s Art….” But that acknowledgment slights the scope of Cohen’s work. While she indeed turns her critical eye toward the ambitious series of prints executed in the mid-1930s for the dealer Ambroise Vollard, in which the Spaniard made overt references to the Dutchman, her broader focus is on Picasso’s work in the final six years of his long life. That was when Rembrandt reappeared in frequently obscure riffs, essences and mutations. “That’s where the density of the Rembrandt impact was,” she told me. But in 1982, when she was a graduate student at New York University’s Institute of Fine Arts, that impact was not yet clear to scholars.

That year, less than a decade after Picasso’s death, Cohen sought admission to a seminar on late Picasso prints, taught by Institute of Fine Arts professor Gert Schiff. “He was specifically looking for someone who had knowledge of 17th-century Dutch art because he’d recognized in the late Picasso references to Rembrandt’s musketeer figures [in “The Night Watch”], which he suspected were just the tip of the iceberg. What’s so exciting about art history is that you do have these unexplored pockets.” Having recently completed an internship at the Rijksmuseum in Amsterdam, Cohen describes herself as “the right person in the right place” to pin down the geriatric genius’s engagement with Rembrandt.

“I’d developed the eyes to see Rembrandt in Picasso’s work,” she said. “For instance, those big, dark, circle eyes of ‘The Young Painter.’ That made me think immediately of the Rembrandt self-portrait at the Museum of Fine Arts in Boston.” Cohen was aided by Picasso’s habit of precisely dating his late work in Roman numerals. “You could go through the output day by day. In a sense, he animated his own work. I disappeared into the library and basically didn’t come out for three months,” she said.

The middle section of Schama’s essay wanders afield from “Picasso’s Rembrandt” — and from the influence of Cohen’s essay — to a wide-ranging discussion of Rembrandt as “the patriarch of painterly integrity.” Once it returns to its core subject, Shama nods to Cohen for a second time: “In the 1960’s, after a 30-year absence, Rembrandt again came calling, as Cohen points out, entering Picasso’s increasingly morbid meditations on his own place in the pantheon.” Schama then discusses five more Rembrandt works, which specifically fueled Picasso’s imagination: “The Blindness of Tobit,” “Bathsheba,” “His Self-Portrait With Saskia in the Parable of the Prodigal Son,” “The Night Watch” and “Ecce Homo.” All five are covered in Cohen’s essay. Schama adds no examples of the nexus between the two artists of his own.

As in his opening paragraph, Schama follows Cohen’s closing paragraph in his own. His: “Timelessness is not always an empty cliché….” Hers: “One of the qualities of Rembrandt’s work that most attracted Picasso was its timelessness.”

What’s the tally of Schama’s indebtedness to “Etched in Memory”? Each of the nine Picasso works traced to Rembrandt had already been examined in Cohen’s monograph. Six quotations used by Schama, while out there for anyone to employ, just happen to all be in Cohen’s monograph. On a single page of her essay, for example, Cohen quotes Picasso’s mistress Françoise Gilot, Quinn and the Mexican artist and writer Marius de Zavas. Is it by chance that each of these quotes appears in Schama’s far shorter article? Numerous factoids have also been recycled from Cohen’s essay, such as this one referencing “The Night Watch”: Schama: “Sometimes Picasso would project a slide of the painting on his wall.” Cohen: “Picasso would project slides of Rembrandt’s ‘Night Watch’ against the wall.”

Cohen was thrilled to see her old academic work reborn in the pages of The New Yorker. But with that thrill came pause: Schama’s essay, insofar as it concerned Picasso’s engagement with Rembrandt, clearly and heavily rode on the shoulders of her own. Schama admitted as much when, after publication, he invited Cohen to tea at Columbia University: “He introduced me to several colleagues, saying, ‘This is the woman from whom I borrowed heavily for my article.’ He told me that he couldn’t have written his piece without my ‘superb essay.’”

That gracious and full acknowledgment is lost to the reader. An even more fitting tribute to Janie Cohen’s essay, however, might have been for Schama to have said to himself, “Wow, I wish I’d written this,” and then gone on to apply his brilliance to a fresh topic awaiting his own deep digging.

Peter Hellman is a journalist and the author of eight books, including “The Auschwitz Album” (Random House, 1981) and “When Courage Was Stronger Than Fear” (Marlowe & Company, 2004).