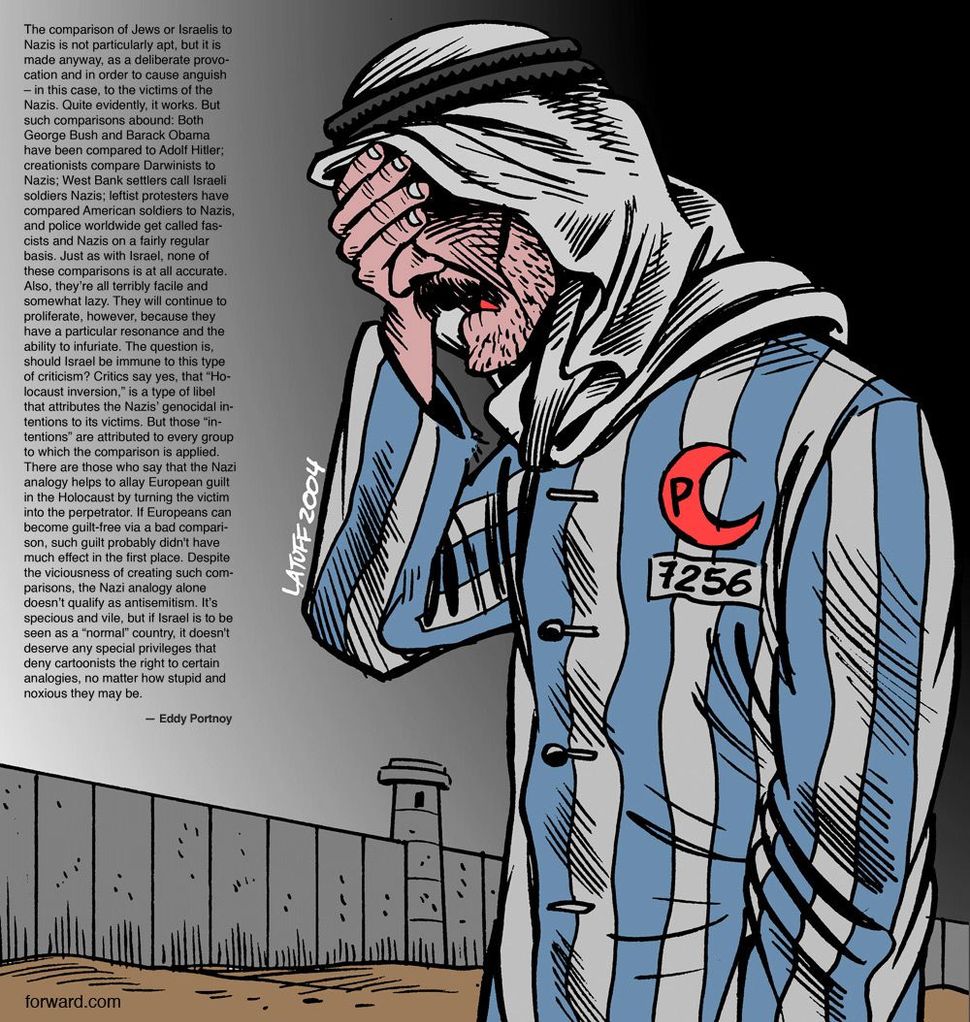 Eddy Portnoy: You frequently use the Holocaust as a metaphor to criticize Israeli policies. This is seen as an inaccurate comparison and deliberately hurtful to Jews. Can you further explain your use of this metaphor?

Carlos Latuff: As a cartoonist, I feel comfortable enough to make any comparison I think necessary that expresses my point. Metaphors are the key point to political cartooning. Of course Israel isn’t building gas chambers in the West Bank, but surely we can find some similarities between the treatment given to Palestinians by the [Israel Defense Forces] and the Jews under Nazi rule. Inaccurate or not, it’s important to highlight that such comparisons have been made worldwide not only by cartoonists, but by people such as Yosef “Tommy” Lapid, Ariel Sharon’s former justice minister and a Holocaust survivor (deceased in June of 2008). He said in 2004, during an interview, that a photo of an elderly Palestinian woman searching through rubble reminded him of his grandmother who died in Auschwitz. For me, this is more painful than comparisons of how Palestinians live under Israeli occupation.

E.P.: “Cartoons and Extremism” argues that you use a “medieval and modern antisemitic grammar and vocabulary,” meaning you apply traditional antisemitic motifs to modern political situations. What is your response to this?

C.L.: Israel apologists have frequently compared my cartoons with those published in the Nazi paper Der Stürmer. Let’s have a close look at the Der Stürmer’s cartoonist’s role and mine. Philipp Rupprecht, pen name Fips, dedicated almost 20 years of his life to making only Jew-hating ‘toons for a paper for which the motto was “Jews are our disgrace.” My cartoons have no focus on the Jews or on Judaism. My focus is Israel as a political entity, as a government, their armed forces being a satellite of U.S. interests in the Middle East, and especially Israeli policies toward the Palestinians. It happens to be Israeli Jews that are the oppressors of Palestinians. If they were Christians, Muslims or Buddhists, I would criticize them the same way. I made cartoons about George Bush, Condoleezza Rice, Tony Blair, Ernesto Zedillo (Mexico’s former president), Pinochet, and none of them was Jewish.

I produce political cartoons on different issues, both local (Brazilian) and international, for trade union papers in Brazil and many alternative, progressive, leftist-oriented publications around the world. My detractors say that the use of the Magen David in my Israel-related cartoons is irrefutable proof of antisemitism; however, it’s not my fault if Israel chose sacred religious motifs as national symbols, such as the Knesset Menorah or the Star of David = in killing-machines like F-16 jets. I can’t be blamed for making an Israeli bomb-dropping warbird adorned with a religious symbol, because that’s the way Israeli air force planes are. To say my cartoons are a remake of the past antisemitic imagery is just another well-known strategy for discrediting criticisms regarding Israel.

*E.P.: Is the history of antisemitic caricature completely irrelevant when it comes to criticizing Israel? *

C.L.: No doubt about real antisemitism. Of course you’ll have people hijacking the Palestinian struggle as a chance for bashing the Jews, like European neo-Nazis who demonstrate against the occupation of Palestinian territories or the Iraq War. It’s important for the left to keep them apart from the legitimate struggle for the rights of the Palestinians; however, saying that anti-Zionism is antisemitism is a well-known tactic of intellectual dishonesty.

E.P.: You participated in the Iran Holocaust Cartoon Contest, which also included many genuinely antisemitic cartoons. Do you feel that being associated with these images and such a deliberate provocation in any way compromises your work?

C.L.: The artwork with which I won second place was a depiction of an elderly Palestinian man wearing a Nazi concentration camp uniform, and some people said that I was “denying the Holocaust”! That was completely stupid, since I’m affirming the Holocaust with that illustration. Believe me, no matter what I draw and where I publish, there will be always someone who will point a finger and say it’s antisemitic.

I saw this contest as both a good chance for denouncing the suffering of the Palestinian people before the eyes of world public opinion and for raising questions about the West’s double standards. I mean, you insult the Muslims with a cartoon depicting the Prophet Muhammad as a bomber and then claim the right to “freedom of speech,” but if you make drawings about the Holocaust, then it’s “hatred against the Jews.” 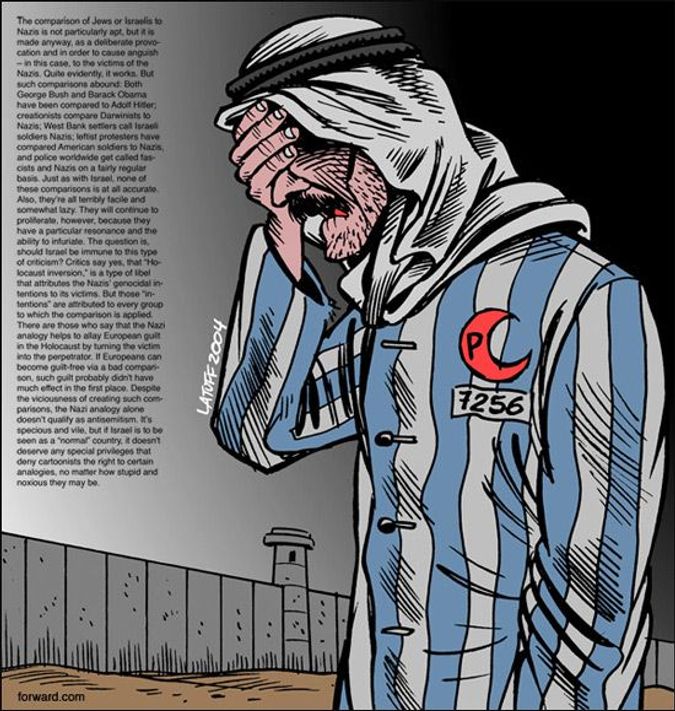 Implicit Critique: The Forward has superimposed Portnoy’s comments about the use of Nazi imagery in cartoons onto an example by Carlos Latuff. Latuff’s political cartoons can be found online at http://latuff2.deviantart.com/gallery.