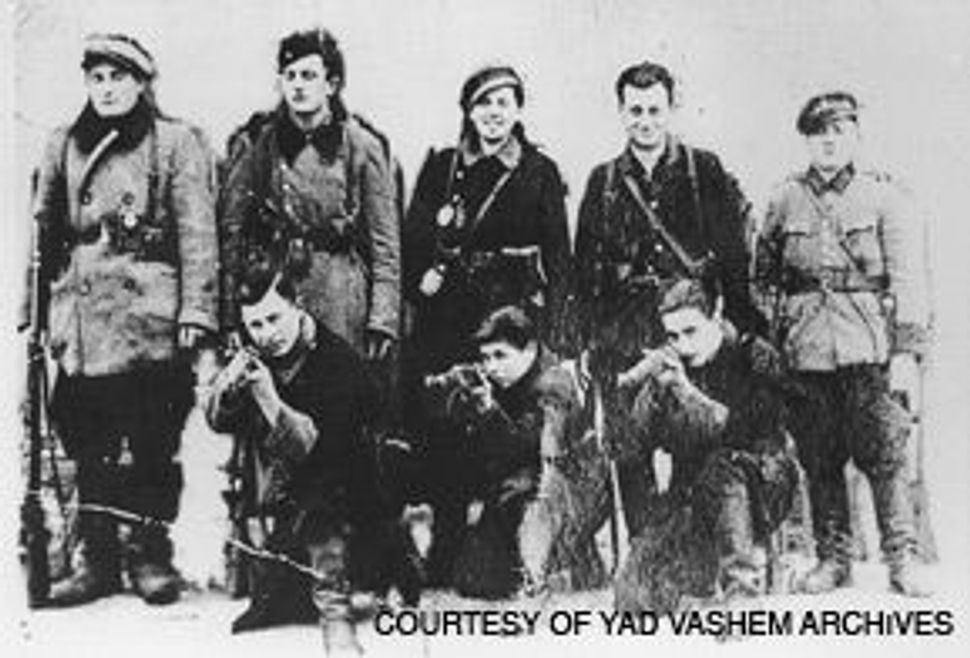 Fighters of the Otriad: Tuvia Bielski (second from right at the back) and six of his group in the Parczow forest, 1943.

Here’s a fast-paced Holocaust film with able, big-name stars Daniel Craig and Liev Schreiber and directed by the accomplished Edward Zwick, who is sympathetically recounting a gripping tale of tough and resourceful Jews. So why is this reviewer disappointed? 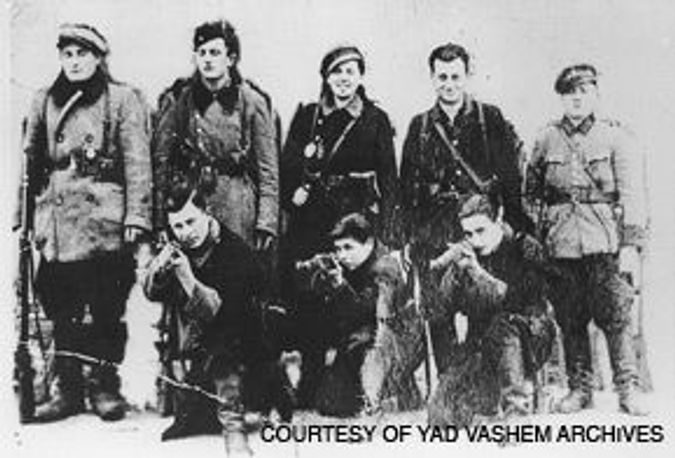 Fighters of the Otriad: Tuvia Bielski (second from right at the back) and six of his group in the Parczow forest, 1943. 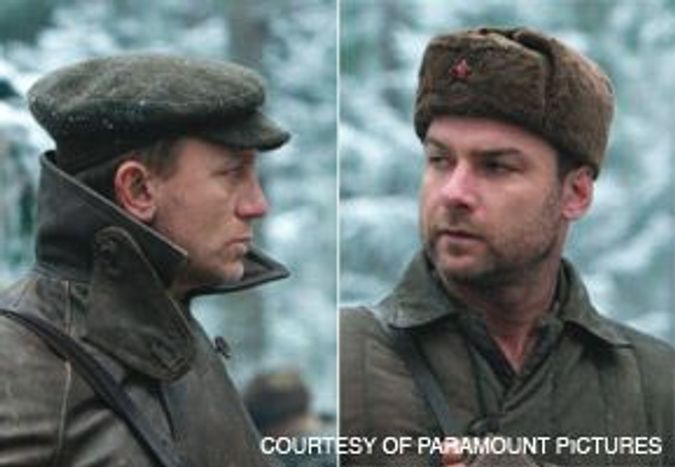 By all accounts, the three oldest Bielski brothers were heroic fighters who preserved the lives of 1,200 Jews hiding out from the Nazis in the thick forests of the Belorussian Soviet Republic, now the independent state of Belarus. It is commendable that their incredible story is now told in a movie dramatization, “Defiance.” It is perhaps even fitting that Tuvia, the eldest and most important of the brothers — handsome and gallant in his physical bearing, and steely in his determination — is portrayed by the latest onscreen incarnation of James Bond. But the film is not quite the “true story” as advertised.

We essentially know the facts from the scholarly book by Nechama Tec, “Defiance: The Bielski Partisans” (Oxford University Press, 1993), upon which the film is loosely based and from which it takes its name. A professor of sociology at the University of Connecticut and a child survivor of the Holocaust, Tec researched the story and interviewed survivors in the late 1980s and early ’90s, but the plot strays from her work in important ways. In particular, the movie becomes more shoot-’em-up than factual depiction of how Tuvia Bielski and his brothers maneuvered against myriad challenges and enormous odds to save Jews.

Craig’s Tuvia comes to blows with his brother Zus, played by Schreiber as an embittered hothead intent upon revenge. Tuvia insists on making the rescuing and sheltering of defenseless Jews their priority over killing Germans and their collaborators. Yet, this film, in highlighting scenes of battle, undermines Tuvia’s point and seems to side with its own characterization of Zus. The Bielski brothers engaged in violence out of necessity, but the nobility of their enterprise is that they preserved lives.

Tec explains that, like all partisan bands of the time, the Bielski *otriad *(as official partisan commands were known in Russian) tried to avoid combat — especially with the Germans — as much as possible. The first goal of all partisans, overarching their ostensible purpose of armed resistance, was to survive. The Bielskis went further by focusing their efforts on rescuing Jews.

Most of their early acts of violence were to kill Belorussian farmers and police who betrayed or hunted down Jews. Their massacre of whole families, leaving notes of explanation, had its impact. Jews fleeing the ghettos in that region were safer because of the Bielskis’ righteous acts of vengeance. But even Tec doesn’t provide the gory details of the possible meaning behind the admission that they killed “families”: Did they execute young children, even babies?

The movie depicts the fully justified demise of one family — and only one. An enthusiastic Jew-hunting policeman and his two uniformed adult sons are shot at their dinner table. But the film leaves the policeman’s wife alive, even as she begs to join her family in death. We may feel the woman’s anguish; in this instance, however, our sympathies are with the killers.

Tec makes the point that the partisans tended to exaggerate their military prowess, in part, to obtain “street cred” with each other. They also needed to impress Stalin’s commissars, secret police and high-ranking officers who parachuted in, as the Soviets acted to impose discipline and order upon disparate gangs and bands that had fled to the forests during the initial disastrous months of the war. These groups were often organized along ethnic lines — Jews, Belorussians, Russians and Poles. Not all were pro-Soviet, and Jews were often excluded, occasionally even killed, by some anti-Nazi forces.

Dramatized in a simplified way in the movie, the Bielski otriad made an alliance with the so-called October otriad under the command of a young Russian officer named Victor Pachenko. The Bielskis lent fighters to Pachenko and to other partisan leaders when required to establish their credibility as a fighting unit. Together, as shown, they engaged in sabotage behind the lines and attacked police stations to procure weapons.

The Bielski otriad had to prove itself doubly: because it was composed of Jews — who were generally regarded as cowards by other groups — and because so many of its members were noncombatants, something that made the Bielski group unique. Tec found Tuvia particularly adroit in his political maneuvering with Pachenko and other partisans, as well as with the general whom the Kremlin had installed as regional commander.

Pachenko appears older than Tuvia in the film, but the reverse was actually true. In fact, Pachenko looked up to Tuvia and sought his advice. The two were more closely allied than the film indicates: They bonded over chess and were further linked by a Jewish woman from the Bielski camp who became Pachenko’s lover for a time. The dangers for the Bielskis were almost as acute from dealing with the interests, egos and prejudices (including antisemitism) of armed partisans and their Stalinist overseers as from fending off the Germans and their collaborationist allies. These are details that could have played well cinematically, but moviegoers will get only a hint of them.

Naturally, a two-hour film could not possibly provide the detail of a scholarly book; a more thorough cinematic account would take at least a miniseries. But, even given the limitations of the genre, the film’s climax is excessively telescoped. And the moments of indecision that Tuvia actually experienced in deciding how to escape a Nazi offensive were not due to being dazed by a bomb blast, as depicted, but because of his genuine confusion as to which way to turn, literally, in leading his people to safety. He was fortunate in choosing the more difficult path — in fact, not a path at all, but a deep marsh — rather than a more inviting route lined with fallen logs, which proved unsafe. The greater human drama was in persevering for a week in an epic trek through the swamp, not in fighting and winning a battle at the end, as the filmmaker chose to depict in his re-creation of the story.

The awesome achievement of the Bielskis to save so many innocents otherwise doomed is cheapened by the image of Hollywood heroes mowing down the enemy, as we’ve seen before in scores of World War II movies. These real heroes had to kill at times, but their story deserves more than a war movie.

Ralph Seliger is the editor of Israel Horizons, the publication of Meretz USA. He blogs at www.MeretzUSA.blogspot.com.