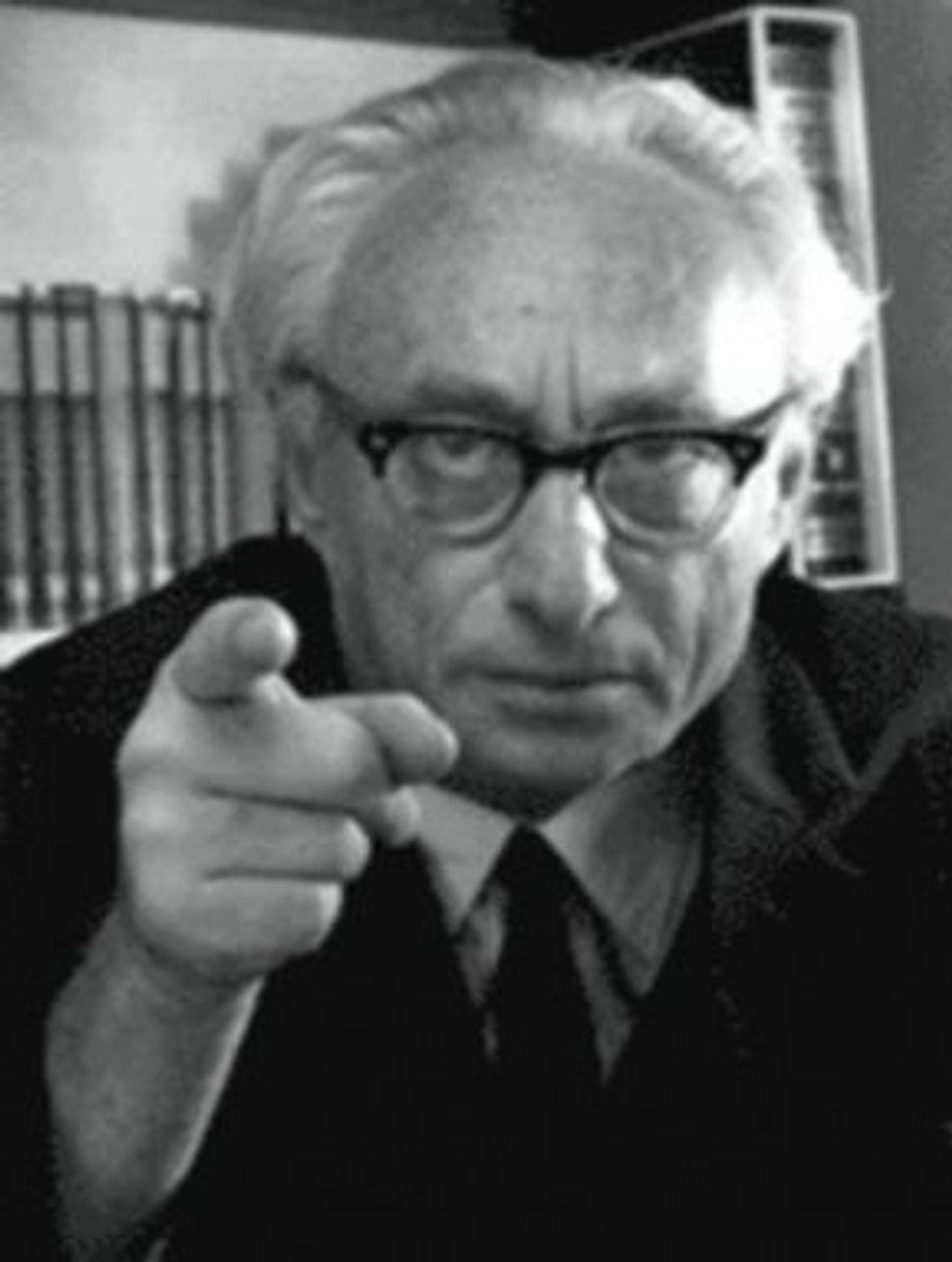 YOUR COUNTRY NEEDS YOU: But what does Israel Eldad think it needs you to do? 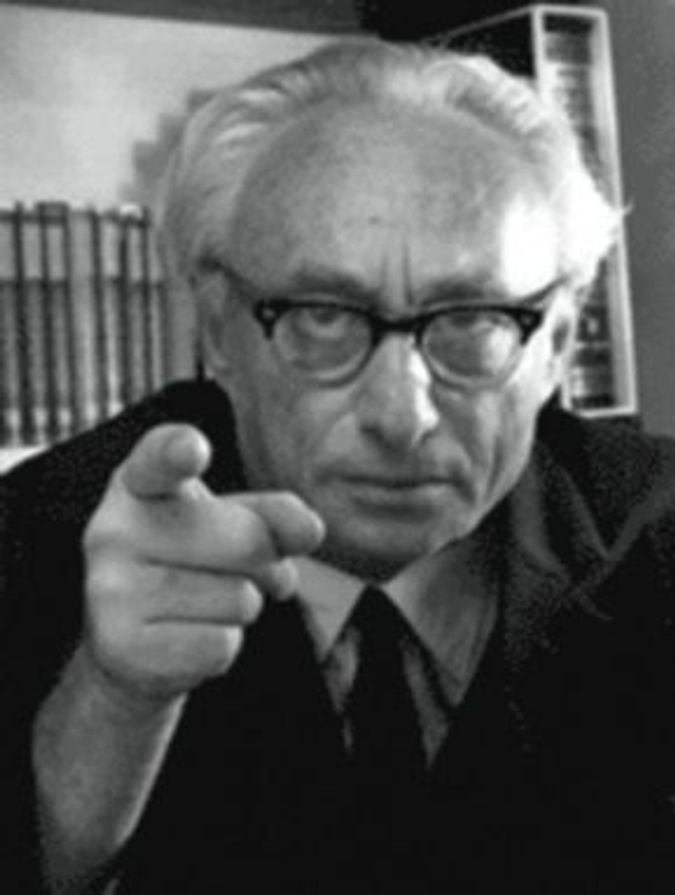 YOUR COUNTRY NEEDS YOU: But what does Israel Eldad think it needs you to do?

For better or for worse, the shadows of 1948 still hang over half the world as reminders of what was and harbingers of what will be, but these shadows are always half-glimpsed. Two recently published translations of memoirs by legendary Israeli political figures solidify some of the shadows for English speakers.

As I sat inside San Francisco’s Castro Theatre last summer, waiting to watch Shai Pollak’s award-winning documentary “Bil’in, My Love,” there was a group of older American Jews in the row behind me, discussing the filmmaker’s politics. “I hear he’s an anarchist,” one of them remarked. An uncomfortable moment of silence briefly followed. “I understand there are a lot of anarchists in Israel these days,” a member of the same party replied. Following a year of increasing press visibility for Anarchists Against the Wall (the Israeli organization that Pollak is associated with, and whose Web site has hosted his work), the addition of another layer of ideology to Israeli life was clearly frustrating. “What will they come up with next?” I expected to hear. Instead, as if to pre-empt any further speculation, the filmmaker took the stage to introduce his film, and the folks behind me fell silent.

Dressed casually in jeans and a sweater, Pollak looked nothing like the stereotype of the hooded and pierced rock-thrower Americans first came to fear during the demonstrations against the World Trade Organization in Seattle. Sounding a little nervous to be introducing his film at the renowned San Francisco Jewish Film Festival, the Tel Aviv filmmaker looked so inconspicuous, he easily could have been one of the Americans sitting behind me, discussing his politics. Yet, because this was San Francisco, it was the audience members’ anxiety that surprised me the most. No other region in the United States has had a more talked about culture of left-wing, explicitly Jewish political activism than the San Francisco Bay Area. Besides, this was a film about the biggest progressive Jewish bête noire, the so-called Apartheid Wall.

That Pollak’s otherwise uncontroversial appearance would have stoked such discussion is nevertheless instructive, because of what it says about American Jewish perceptions of Israeli politics. Despite American Jewry’s intense preoccupation with cataloging all things Israeli, there are certain things about Israel that remain very much alien to it, such as how ideologically driven Israeli politics has always been. That it would be a surprise that anarchists exist in the country is very much the same thing as the level of shock and embarrassment American Jews feel when they hear about such things as the recent “pogroms,” to use Prime Minister Ehud Olmert’s language, that took place in Hebron. In contrast to American Jewish life, Israel has always been marked by extremes — not necessarily only in terms of extremists, but certainly, in comparison to American Jewry, in terms of extreme ideological differences.

The two new translations bear out these distinctions, offering ample opportunity to reflect on the history of the political divisions around which Israeli life has formed. The first and, in literary terms, the better, is Uri Avnery’s “1948: A Soldier’s Tale — The Bloody Road to Jerusalem.” A combination of two best-selling accounts of the Israeli journalist and peacenik’s experiences during Israel’s War of Independence, this English-language publication could not be more overdue — or timely. Finally compensating for a glaring lack of book-length publications by Avnery in the United States, these two stories, by one of the original founders of Israel’s peace movement, bear witness both to Avnery’s immense influence on the Israeli left and the left’s ideological consistency over the years.

Given the fact that this legacy would take the original form of war reporting for Yom Yom, the former evening edition of Haaretz, also helps provide a rather compressed sense of time when reading these accounts of Avnery’s experiences 60 years ago. Moving, in the second, decidedly darker half of 1948, to calling for an alliance between Israel and Arab nationalists makes for even more contemporaneous reading, particularly considering the kinds of differences that characterize Avnery’s relationship with today’s Israeli anarchists, many of whom espouse a bi-national position on Israel’s future, as opposed to Avnery persisting in his belief in the superiority of a two-state solution. That the Gush Shalom leader has for so many years been an identifiable presence at the protests against fence construction in Bilin, together with the anarchists, is fascinating to reflect on.

There is something refreshing about reading Avnery, one of the more ubiquitous Israeli voices in contemporary anti-occupation circles abroad, in this context. Time and time again, despite expressing an increasing sense of alarm, there remains a sense of hopefulness that Avnery’s dispatches today do not always reflect. Indeed, in Avnery’s depictions of the fate of his comrades, and the innate contradiction of the reality communicated by Israeli political rhetoric, there is a sense of warmth and tenderness that the author’s detractors have been quick to have accused him of having lacked in recent years. If, in 1948, an Israeli soldier could experience such overwhelming violence, and in 2008 maintain the conciliatory disposition he professes, however modified, there also should be no surprise that anarchists might be the ones most radically exemplifying this legacy today.

Thus, if 2008 feels uncannily like 1948, it should come as no surprise that the year also would witness the first English-language publication of Israel Eldad’s memoir of his years helping lead the infamous Lehi, better known as the Stern Gang. In “The First Tithe,” American readers have a similarly unique opportunity to acquaint themselves with one of the chief ideological influences on Israel’s extreme right — specifically, proponents of the ideology most opposed by Avnery and his political descendents, that of “Greater Israel.” Eldad is the father of current Moledet/National Union M.K. Aryeh Eldad (also head of the recently founded Hatikva Party), and the parallels between Eldad and his parliamentarian son, today’s national religious camp among the settlers and Avnery and Anarchists Against the Wall may be less ideologically direct, but still entirely parallel.

Like “1948,” “The First Tithe” is a political coming-of-age memoir, albeit one of a distinctly older person. Whereas Avnery’s narrative primarily takes the form of the first person, “The First Tithe” moves endlessly back and forth between recollection and digression, simultaneously dispensing brutal vignettes and radical revolutionary proscription. Repeat accounts of ideological differences with other members of the Israeli right — Menachem Begin most memorably — as pieces of intellectual history, even if you can’t stomach Eldad’s politics, are worth the price of admission. Rather than convey the image of Israel’s revisionist camp as one big happy family, Eldad is all too eager to account for all his comrades’ many and profound weaknesses, however ruthlessly. Also worth noting are his repeat attacks on the socialist predilections of the Zionist establishment in Palestine during the 1940s.

What makes “The First Tithe” most distressing, however, is Eldad’s instinctive willingness to dispense with racism toward Arabs and condone Jewish terrorist violence against British forces during the Mandate period. Witness statements such as, “When the British sergeants were hanged… a load was lifted from my heart,” in reference to a revenge attack for the killing of five members of the Irgun; or, “I learned to admire the tolerance and suffering of the boys who had lived four and five years with such Arab filth.” It’s what you would expect, but still remains jarring reading in terms of how no-nonsense it all is. The guy really meant it. Indeed, if any emotion colors Eldad’s narrative, there is a sense of immense spite, if not outright hatred. If English-speaking readers find themselves surprised by how harsh the rhetoric of Israel’s right is today, with translations like these now available, there’s no excuse not to know where it all came from.

*Joel Schalit is the culture editor of Zeek. His fifth book, “Israel vs. Utopia” (Akashic Books) is forthcoming. He lives and works in London. *