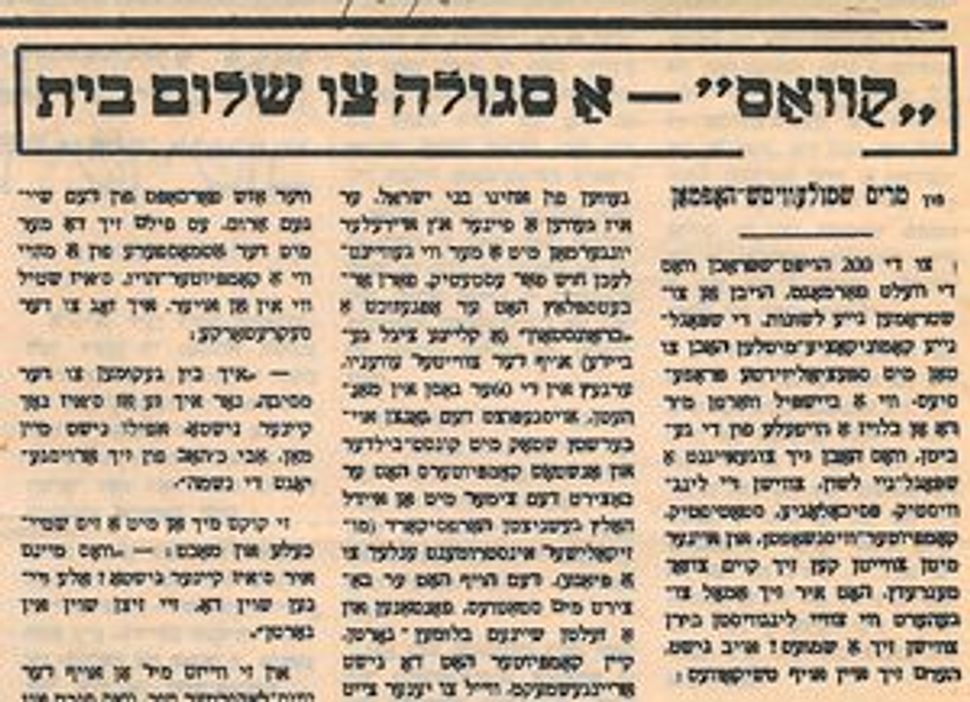 Translated by Miriam Hoffman and Beverly Koenigsberg
This story originally appeared in the Forverts of August 30, 1985.

In addition to the 200 major languages currently in use, new forms of expression continue to emerge. These new means of communication deal for the most part with specialized professions — such as linguistics, psychology, statistics and computer science — whose specialists can barely communicate with each other. Have you ever heard two linguists conducting a conversation? Listen to this.

“If you’re craving lexicographical innovations, I offer you a compilation of consonants, vocalisms and tongue twisters. This relates exclusively to the descriptive normative point of view. When, however, you’re dealing initially with a descriptive projection on the question of grammatical gender, I prefer to name it on the basis of a normative format.”

Tell the truth. Did you understand a single word of that quotation?

But to continue. A couple of years ago, when the computer world was still in its infancy, my husband, Mendl, sought out a partner for a business venture in computer technology. John, a fine, honest young man with exceptional aesthetic sensibilities was his choice. For their workplace, John rented a Manhattan brownstone on Second Avenue in the 60s, filled the entire upper floor with works of art and in addition decorated the lower room with a delicately carved wooden harpsichord. The courtyard was embellished with statues, fountains and an exquisite flower garden. Nowhere on the premises was there a suggestion of computers, because in those days computers were too oversized, expensive and clumsy to be housed anywhere but in a large university. As a result, computer hours were generally rented from the universities.

I grabbed my hat and high heels, raced into the city where those impressive two-storied buildings were located, rang the bell, darted up the stairs and waited, hardly able to catch my breath, facing a pretty, red haired secretary. I looked around, spellbound by the artistic surroundings. The atmosphere was more like that of a museum than a computer office. It was as quiet as a tomb. Addressing the secretary I said: “I came for the party, but I see that no one is here as yet. Not even my husband. And I rushed myself like a lunatic.”

She smiled sweetly at me.

“What do you mean no one is here?” She asked. “Everybody is here already. They’re sitting in the garden.”

And she pointed out a lacquered white door that opened onto the patio. I walked through and found myself standing in a charming manicured garden. On comfortable director-style chairs arranged in a circle sat 10 elegantly dressed men, not a single woman in sight but me. John ran up and gleefully threw his arms around me.

“So happy to see you,” he called out cheerfully. “Come along and I’ll introduce you to this collection of elite intellectuals.” And while handing everyone a glass of sparkling champagne, he continued: “Meet Professor Van Doren from Stockholm. This year he is a visiting professor at Harvard University. And this is Dr. Rosenzweig from the University of Leipzig who recently settled in the States and teaches at Yale. And here we have Professor Mark, Professor Jenkin and Dr…..”

Their names and titles began to spin in my head. Only one thought pounded in my brain: What subject could I possibly discuss with them? I knew nothing about statistics, was not acquainted with computers and remained light years away from an understanding of linguistic formulae. The more I reflected, the more panicky I became. All rational thought simply deserted me at this disastrous moment. With each introduction the guest would stand politely, shake my hand and intone, “Glad to meet you.”

When the introductory ceremonies were completed, the entire contingent of well-groomed professors resumed their deliberations. One of them addressed the assembled group:

“Don’t forget, gentlemen, that a factorial analysis of psychological phenomena shows that the major factors in individual personalities are based on no less than seven rooted Latin structures.”

I was able to discern individual voices, but nonetheless didn’t begin to know how to process what they were saying. Latin phenomena and factorial structures! What in heaven’s name do they mean by that? May I be struck by lightning if I had the vaguest inkling as to what they were babbling about. A dismal notion struck me: What am I doing here? How did I fall into this trap? If a moment ago I had been unable to think clearly, now I began to feel like a pathetic orphan who had wandered off the edge of God’s earth, lost and abandoned. I imbibed little sips of champagne and made plans for a grand escape. Near me stood a lanky white-haired professor who appeared to be absorbed in the strange colloquy. He turned toward me, coughed lightly and commented: “Interesting to observe that Goodman’s analysis illustrates how even the Latin structures are circular in their forms. What do you say to that?”

Had lightning struck me at that moment, I would have preferred it to being faced with his question. Instead of replying, I nodded my head in assent and threw him a sweet smile. But the professor on my left snatched up the other’s vital observation and informed us: “Terestan meant that no more than two such basic factors exist, but Lindquist has demonstrated that if you don’t consider linear measure and standard deviation, you can split the factors over and over again; he himself found over a hundred clearly identifiable factors of intelligence and personality.”

At this juncture I felt my blood run cold. I wouldn’t have hoped for my worst enemy to be in my shoes just then. A dreadful idea engulfed me: Maybe they think that I, too, am some kind of expert in one of their fields. Go tell them that I’m only a Yiddish teacher from the Bronx. But they continued unfalteringly: “The correlation between the forms of information is by no means linear, but an orthographical transformation of the oblique lines demonstrates that the regressive line is not minimal.”

Have you ever heard such language? What did it all signify? Suddenly, a group of men turned their heads my way and one among them finally pushed my back against the wall.

“Well. And what is your opinion?” He asked.

At the sound of these words, I gulped down a serious swig of champagne, breathed deeply and responded in the most decisive voice I could muster: “I say… that this champagne has the flavor of Kvass!”

The ten men pricked up their ears. Their expressions indicated genuine curiosity: “Kvass? What’s the meaning of Kvass?”

“Aha! If that’s the case,” I now told myself, “you aren’t the complete hotshots I had taken you for. And that being so, I’ll spin you a tale about Kvass!”

In great earnestness, I began my explication: “Kvass… is a drink made from fermented bread. And it is the national drink of the Russian people.”

“So, now we understand,” one of them said. “You are a Sovietologist by profession! Let us hear what is being worked on in Russia these days in the area of nutrition and fermentation.”

Now I was on home territory! I told them about Kvass, recited anecdotes relating to Kvass, summarized the history of Kvass, recounted the development of Kvass and unraveled the mysteries of this precious drink that had come to my rescue at a moment of imminent disaster. (The men were enraptured.)

Mendl suddenly appeared and saw the cluster of people around me. He didn’t understand what magic I had performed that had so thoroughly enthralled the 10 professors.

“Let me into the circle, too,” I heard Mendl say, trying to break into the group. And at that moment the white-haired professor turned to him and said: “Were it not for her, we would all have drowned in the tedious subject of Factor Analysis. It seemed as though the earth were sinking under the weight of those disgusting statistics, when suddenly your wife uncovered a new world for us — Kvass. We could breathe easily again. Out with microchips! Out with standard deviations! There’s heaven and earth… and Kvass. Mendl, do you at least know about this spectacular Kvass?”

We all laughed heartily. And I? I understood for the first time the power of the exotic.

On the way home, Mendl complained to me: “How can this be? How is it you never told me all those stories about Kvass?

Well, how could I explain to him that had Kvass not popped into her head when it did, his wife would have come face to face with her own Armageddon that very afternoon?