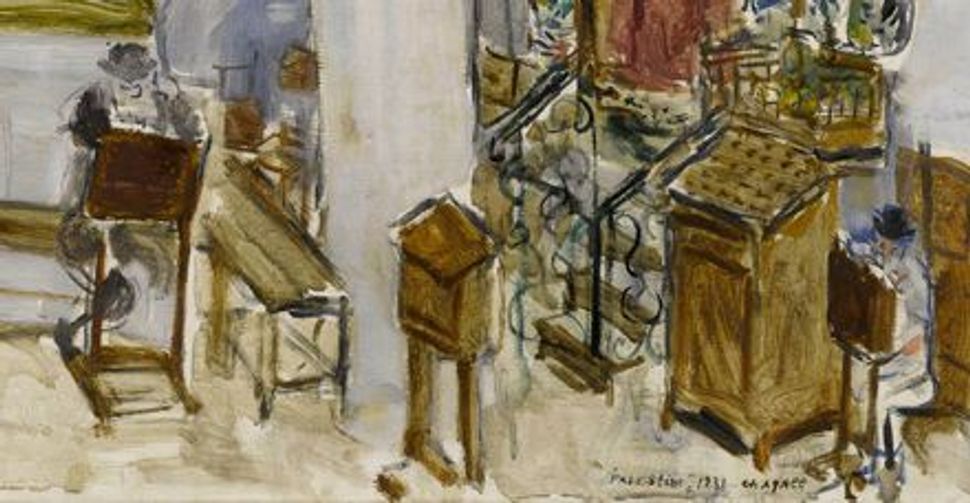 Image by courtesy of sotheby?s 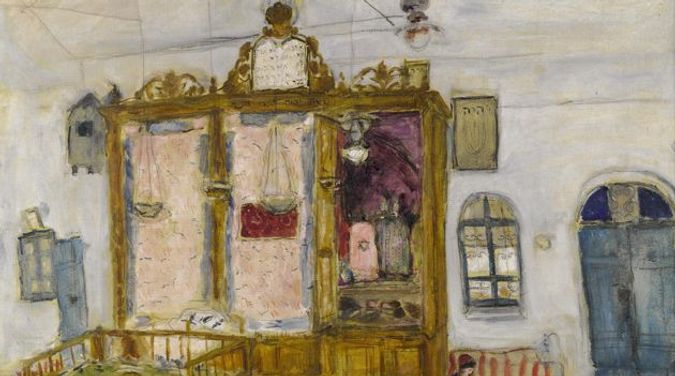 ?No Two-Faced Cows?: By the time these 1931 paintings by Marc Chagall were shown at The Gallery of Jewish Art in 1945, much of the architecture depicted in them in rich detail had been destroyed by the Nazis. Image by courtesy of sotheby?s

Last month, on December 14, three carefully detailed renderings of synagogue interiors, the handiwork of Marc Chagall, fetched $2.3 million at Sotheby’s. In the days preceding the auction, much was made of the rarity of these works and of how they stood apart from the artist’s oeuvre, which tilted toward the fantastical.

A great deal of attention was also lavished on how the paintings had come to light: It seems that they were recently consigned to Sotheby’s by the heirs of the collector, who had first purchased them in 1945 from the Gallery of Jewish Art, in New York.

Virtually no account of the paintings’ provenance paid heed to this choice tidbit, but it stopped me dead in my tracks. The Gallery of Jewish Art? In the heart of Midtown Manhattan, on East 30th Street? In 1945, several years before The Jewish Museum first opened its doors on Fifth Avenue? I pride myself on knowing a lot of obscure things about the American Jewish experience, but I had never before stumbled across the Gallery of Jewish Art.

Eager to learn more, I turned to one of my colleagues, Jeannie Rosenfeld, who, prompted by the Sotheby’s auction, had written about Chagall’s synagogue paintings. She was kind enough to share with me a copy of the brochure that had accompanied the inaugural exhibition of the Gallery of Jewish Art, where the “Synagogue Series” of the Vitebsk-born artist was exhibited.

Although the brochure is modest and unassuming, the paintings on display at this “new enterprise of a non-profit character” were anything but. Joseph Israels, Camille Pissarro, Max Liebermann, Jules Pascin and Chaim Soutine joined Chagall. In addition, a “group of ceremonial objects” on loan from the Museum of the Jewish Theological Seminary rounded out the exhibition, whose other lenders included Sholem Asch and Pierre Matisse.

Reviewing the exhibition within the pages of the New York World-Telegram, Emily Genauer expressed both surprise and delight at Chagall’s “comparatively realistic” turn. “No figures float through the air here… there are no two-faced cows, no bears and violins, no lovers lost in ecstasy walking on clouds,” she related. Instead, visitors to the Gallery of Jewish Art encountered a series of “simply, lightly brushed picturizations” that grew out of Chagall’s “affectionate lingering on the rich details of the architecture,” much of which had been destroyed recently by the Nazis.

Aesthetic pleasure, then, wasn’t the only experience to be had at the inaugural exhibition of the Gallery of Jewish Art, Genauer concluded perceptively. “In its own way, this is a war show, too.”

The brand-new gallery understood this all too well, and in its very first exhibition, as well as in those that followed, it displayed a keen sense of the historical moment. An early adumbration of Holocaust memorialization, the Gallery of Jewish Art realized that it stood at the cusp of dramatic change. Its words are worth quoting in full:

Coming as it does at this juncture, when the agonizing and fateful days in the life of an ancient people are drawing to a close with the termination of a martyrdom lasting six long years, many may see in this presentation a fitting as well as symbolic occasion for the opening of a home of Jewish art.

In the years that followed, the Gallery of Jewish Art made good on its promise. In 1946 it showcased the early work of Abraham Walkowitz, with its deftly rendered street scenes of the Lower East Side and those who inhabited it. The bilingual catalog that accompanied the exhibition — in Yiddish it was called geto-motivn, or ghetto motifs — praised the painter for the ways in which the “East Side idyls (sic), the joys and sorrows of the ghetto, are to this day deeply woven into the work.”

Many contemporary Jewish artists, it went on to say, were inclined to forget their origins and “imagine themselves endlessly remote from the Jewish stem, from the deep-lying Jewish roots.” But not Walkowitz. He was a “nostalgic romantic” of the first order.

Much the same could be said of Ilya Schor, whose paintings of Eastern European Jewish life were exhibited at the gallery a year later. A New York Times advertisement for the show called it “an exhibition of paintings on Jewish subjects,” while its catalog bore a more haimish title: “Paintings on Yiddish Themes.” On display were 68 works that paid homage to the religious institutions and practices of the Old World, from synagogue interiors to men in shtraymlekh, or fur hats.

In his introduction to the exhibition catalog, Stephen Kayser, the newly appointed curator of The Jewish Museum, lauded Schor for the edifying manner in which the “Galician world of a forlorn Jewry lives on in these little pictures, not as ghosts but as witnesses.” Deeply moved by their presence, Kayser concluded his account by insisting that these works of art ought to have a deep and resounding appeal for American Jews. After all, they brought out the “indestructible strength of the little people appearing here. Within carved frames they live on to be your brethren. Do welcome them as such.”

In the absence of extant sources, it’s hard to say whether or not those who visited the Gallery of Jewish Art in the spring of 1947 heeded Kayser’s charge or, for that matter, took to heart its mandate. In fact, how much longer the gallery actually remained in business is anyone’s guess. If any readers know the answer, please share it with us.

Still, during its limited run, the Gallery of Jewish Art sought energetically to make a case for the integrity — and the moral urgency — of Jewish artistic expression. Well ahead of their time, its founders (names, anyone?) insisted that Jewish art wasn’t so much of an oxymoron as it was an imperative. They put it this way:

In starting this gallery, we can only hope to be able in the future to add to the evidence of what the different national strains can contribute toward the cultural achievements of a land…. The outcropping of national or racial (much maligned word!) characteristics, the revealing of different temperaments, outlooks and traditions, only helps to bring about a richer art expression and contribute to the complex culture of our country.”

More than half a century later, this clarion call continues to make itself felt in ateliers, classrooms, galleries and museums across the country.